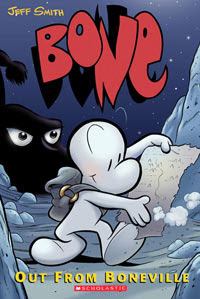 I am extremely picky about my girls' reading material. For example, the only Winnie-the-Pooh stories in our house are the unabridged versions by A.A. Milne. We know Tinkerbell not as the cute, pretty, Disneyized sprite, but as the nasty little thing made famous by J.M. Barrie. We've read Homer and we're starting Shakespeare. Last October, I introduced the works of Poe.

I guess it's safe to say that when it comes to literature, I'm a complete and total snob.

That being said, I don't censor what Alex and Sage choose to read for themselves. They're allowed to check out anything they wish from the library or buy what they will using their spending money.

So thank goodness they discovered Jeff Smith's Bone. There are nine volumes in this adventurous and engaging series, and the girls have read every one.

Alex picked up her copy of Volume One, Out From Boneville, two years ago on the suggestion of a friend. She read through it that same evening. The next day, she read it to Sage, and both of them became hooked. The girls received the rest of the series piecemeal over a period of months; they've since read the volumes over and over and over again on a weekly, if not daily, basis. Each book is now tattered from the constant use and most of the pages are crinkled and stained.

I'm a fan too. Bone is, in my opinion, the perfect graphic novel. The premise is simple -- three "Bone" creatures (white blobby-looking things) are thrown out of their town and arrive in a different land. They promptly fall into adventure after adventure as they try to find their way back home. They meet blood-thirsty (but inept) rat creatures, a talking leaf, strange townspeople who use eggs for money, an old warrior queen, a "lost" (but very smart and tough) princess, and other beings of interest. They get involved in others' complicated problems and each plays the hero on at least one occasion. There's magic, humor, moral dilemmas, quests, and even a cool-looking red dragon.

The women are strong and there's no sexuality other than the main Bone creature having an obvious (and humorous) crush on the young and beautiful Thorn. Though there is occasional violence, it was nothing my girls couldn't handle. That being said, Scholastic recommends this series for kids ages nine to twelve, so a parents of younger children might want to flip through the individual books before buying to make sure the series is appropriate. If I had to give the series a movie rating, I'd declare it a solid PG.

Bone books made it possible for the girls and I to go on our highpointing spree last year. We spent an average of six hours a day in the car for eight weeks. Not once during our trip did either of my girls complain or grumble. When they weren't looking out the windows, they were reading and rereading Bone.

If you're looking for a graphic novel series devoid of sex and gratuitous violence, and if you enjoy adventure, wit, and strong female characters, then Bone is the series for you.

Posted by Patricia Ellis Herr, Alexandra Herr, and Sage Herr at 10:50 AM