Thursday Review: I Am Nujood, Age 10 and Divorced 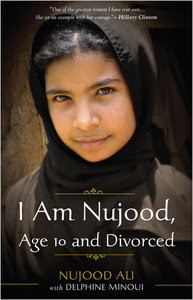 First, a bit of disclosure. Nujood Ali's book was published by Broadway Books, the same company that will publish my mother-daughter adventure memoir, UP, in April 2012.

Second, a confession. This was the first I'd heard of this case. This might seem surprising, since Nujood's divorce was all over the news a few years back. Don't know how I managed to miss this story when it actually happened, but I did.

I saw this book two weeks ago, while I was browsing through a local store near my home in New Hampshire. The eyes on the cover are what first caught my attention. Intelligent and engaging, they made it obvious their owner was strong in spirit and had something to say. Then I read the title and felt I needed to know more. I therefore bought the book and delved.

Written in the voice of a ten-year-old girl, the prose is relatively simple and blunt; such are the words of children, who speak the truth as they see it. Adults tend to infuse their text with stuffy literary devices and lofty pretense. Nujood's words are direct and honest. They often feel like an unintentional punch to the gut.

Born in a tiny village in rural Yemen, Nujood Ali was raised in the patriarchal traditions of her ultra-conservative culture. In 2008, at the age of nine, she was married off to a man three times her age by her poverty-stricken father and loving but completely submissive mother. The man promised her family that he would not touch Nujood until she reached puberty, but he promptly broke that promise on the very night of his wedding. Nujood endured months of physical and emotional suffering at the hands of her husband and in-laws until she finally gathered the courage to escape and find a courthouse, where she explained her situation to a thankfully sympathetic judge.

We in the United States are somewhat aware that these things happen in other parts of the world. Reading a personal account, however, truly opens one's eyes. My daughter, Alex, will be nine years old in less than six months. She's almost the age Nujood was when she was married off. When I put all this into such a personal perspective, my mind boggles.

Sage keeps asking if I will read this book to her. At six years old, she is not ready to hear the more tragic aspects of Nujood's story. This won't stop me from reading most of the book out loud, though. I will definitely skip over the parts young Sage can't yet understand or handle, but I can get the gist across. Nine-year old Nujood was married off without her consent in a part of the world where women and girls are still viewed as property. A few months later, Nujood found her way to a Yemen courtroom and demanded justice. She got it, with the help of many of her brave countrymen and women.

I highly recommend this book to everyone, but I feel girls (mature readers) and women will especially benefit. Sitting in our relative privilege, it's too easy to forget what far too many women go through in other parts of the world. Awareness leads to advocacy, and, when it comes to women's rights, we can't have too much of that.