The girls and I have stayed off the mountains during the past couple of weeks.  We don't have a lot of flexibility as to which days we can hike during the academic year, since both girls are heavily involved with a myriad of extracurricular activities.  Fridays have been our "hiking days" for the 2013-2014 school year...and our March Fridays have been met with snowstorms, sleet, and overall challenging weather.  Therefore, we've kept our hiking to the local streets and hills.  Hopefully, we can get back on the mountain trails next week.

In the meantime, check out Hugh's latest TED Talk.  It's groundbreaking, inspirational, and just plain cool.


Posted by Patricia Ellis Herr, Alexandra Herr, and Sage Herr at 9:03 AM 2 comments:

Exactly one year ago, Hugh, the girls, and I (and Flo from Switzerland!) were sleeping in an albergue in Valcarlos, Spain.  We had just begun our Camino, even though it felt like we hadn't left New Hampshire.  The snow was plentiful and the temperatures were identical to our normal Northeast winters.  The four of us felt happy, optimistic, and excited to see what the immediate weeks would bring.

What followed were days of bliss.  Yes, I know, roll your eyes if you must -- but I'm serious.  Yes, there were moments of fatigue, and yes, the sun was sometimes too bright (for this NH hiker), and yes, there was that bunion I developed (and still deal with).  But still.  Our time on the Camino was nothing short of magical.

What made the Camino so special?  Probably the same thing that makes every thru-hike amazing, in spite of the tired feet and aching muscles.  We met, spoke, and broke bread with people from all over the world, we saw beautiful countrysides, and we were able to eat everything we wanted without gaining an ounce of fat -- but the main thing, THE special thing, was the simplicity of our routine.  Wake up, hike, find a spot for the evening, clean up, eat, sleep, repeat.

The simplicity -- THAT'S the magic of the Camino.  I haven't yet hiked any other long-distance trail, but I suspect that's the magic of them all.  Hike, eat, sleep, repeat.  Day after day after day.  When one strips away modern day-to-day superfluousness (anything more than the basic needs of food, health, and shelter) and is forced to live moment-to-moment, outside, in all types of weather, one is left with oneself.  Meaning, there's nothing left but your core.  Who you are and what you value becomes abundantly clear after a couple of weeks on the trail.

The girls, being very young, didn't look at the Camino as any kind of back-to-basics experience.  They saw it as an adventure.  A huge, big, marvelous adventure in which they saw many gorgeous landscapes, spoke to many different people, and ate many fabulous meals.  I hope they remember our upcoming JMT hike in the same way they now remember the Camino.

I had to stop yesterday's reflection because of mom duties.

I'll conclude this post by listing the following life changes that were a direct result of the Camino.  I suspect these changes are permanent.

No more wasted time.  I don't mean no more staring at clouds or sunsets -- those moments aren't wasted time.  On the contrary, those kinds of moments are what life is all about.  I mean, no more wasted minutes or hours spent trying to impress people I don't care about or appease the insecure.  No more spending time with people who a) discriminate against...well, anyone or b) participate in organizations that discriminate against...well, anyone.

Simplicity rules.  If I don't need it, then I don't own it.

Letting go of my kids while still actively guiding them.  See my previous post regarding VLACS.  Also, though we will continue to hike throughout the years (the girls show no signs of slowing down), the JMT hike might be our last trek for charity.  Both girls want to continue contributing to society, but both want to "give back" in their own, unique ways.  Alex wants to do serious trail work in the Whites, and Sage is interested in a specific local volunteer opportunity.  This is good, this is important.  Each daughter is finding her own way forward, each is discovering how she can make a positive contribution according to her own individual interests.  So, in sum, our hiking adventures will continue after this summer's hike of the JMT, but future charity work may or may not involve our hikes.  It's important the girls begin to find their own ways forward in terms of volunteerism.

Taking better care of my health.  I lost weight on the Camino, and I've kept it off.  Keeping it off has been rather easy, since we now make a huge effort to eat healthy, home-cooked meals almost every day.  We all continue to get a lot of exercise...and I continue to enjoy the taste of red wine (though I don't drink as much now as I did on the Camino!).

Knowing...knowing...that more thru-hikes/extended outdoor excursions are in my future.  Assuming my health remains strong, I will hike long-distance trails throughout my retirement years.  If my health does not allow for thru-hiking, then I'll bike cross-country.  Or, I'll visit all the National Parks.  There will be something I can do, regardless of my health status.  The earth is beautiful, and I want to see as much of it as I can.  I don't mind tenting, so this kind of travel/retirement won't be expensive.  I'm a low maintenance gal.

I'll leave it at that.  Time to move onward.  Ultreia.
Posted by Patricia Ellis Herr, Alexandra Herr, and Sage Herr at 10:16 PM 5 comments:

This was a perfect-weather day, and we originally planned on doing Franconia Ridge. The FR trails were, I had heard, sidewalks, the day was to be bluebird, and the sunshine bright.  However, at the kitchen table, twenty minutes before leaving the house, we changed our minds.

Franconia Ridge is gorgeous, but we've done it several times.  Sage and I share the mindset that we'd rather ascend a new-to-us peak than repeat the same thing over and over (except for the 4Ks we've haven't yet completed for our Desserts on the 48 quest).  I looked online while the kids finished their cereal and discovered that the Lambert Ridge Trail was broken out.  The Lambert Ridge Trail goes up Smarts Mountain, a 52 With a View we hadn't yet experienced.  We threw our snowshoes in the car and I texted our new destination to our "safety folks" (people who know of our hiking plans).

Smarts Mountain is near Lyme, NH.  It's the first significant NH mountain northbound Appalachian Trail thru-hikers ascend.  There are several ways up this peak -- we chose the Lambert Ridge Trail, which coincides with the AT and, as I previously mentioned, had already been broken out by other hikers. 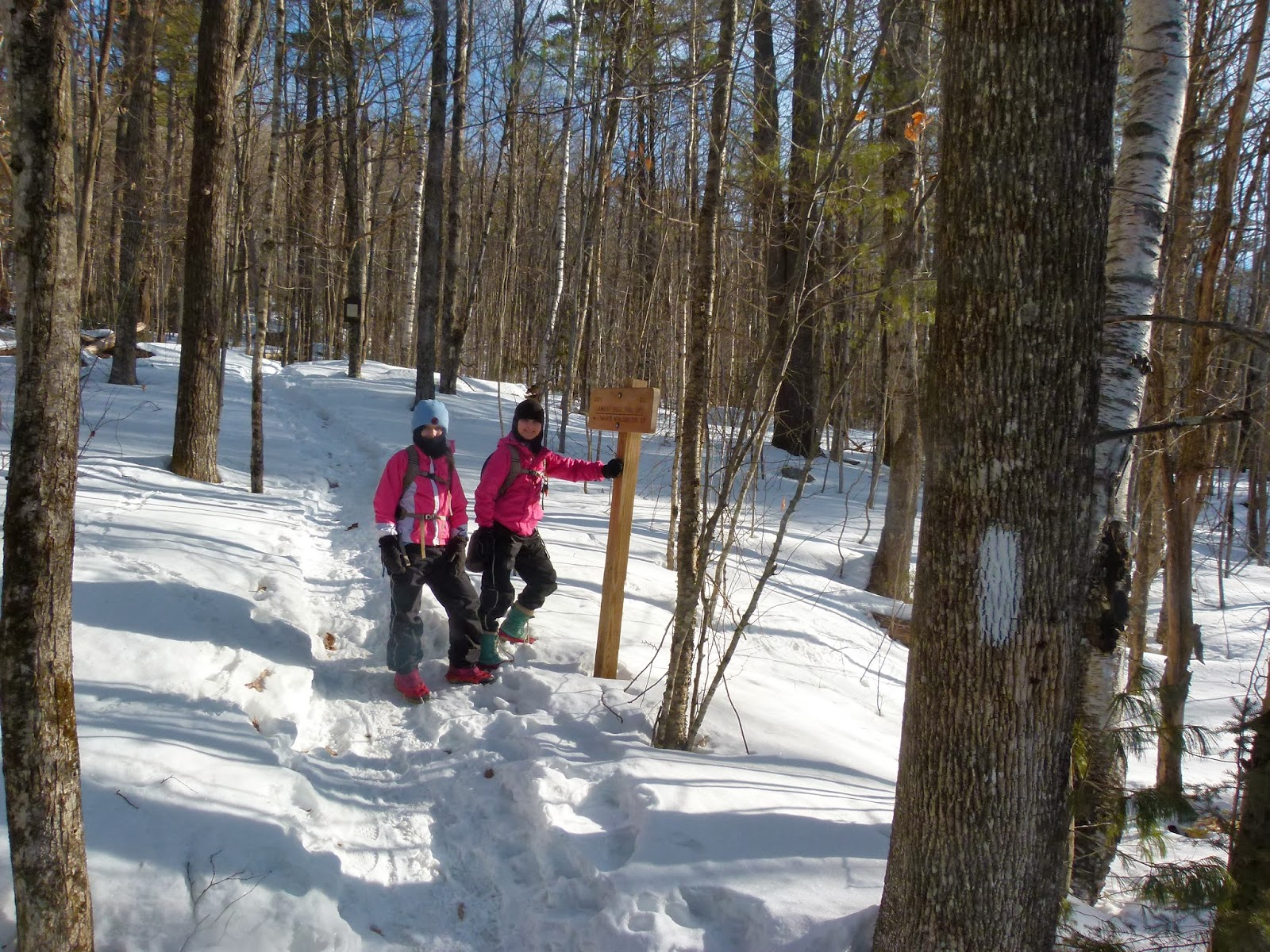 The trail goes up at a moderate grade for the first 0.8 mile.  We were happy the path was firm.  My snowshoes rode on my back for the entire ascent. 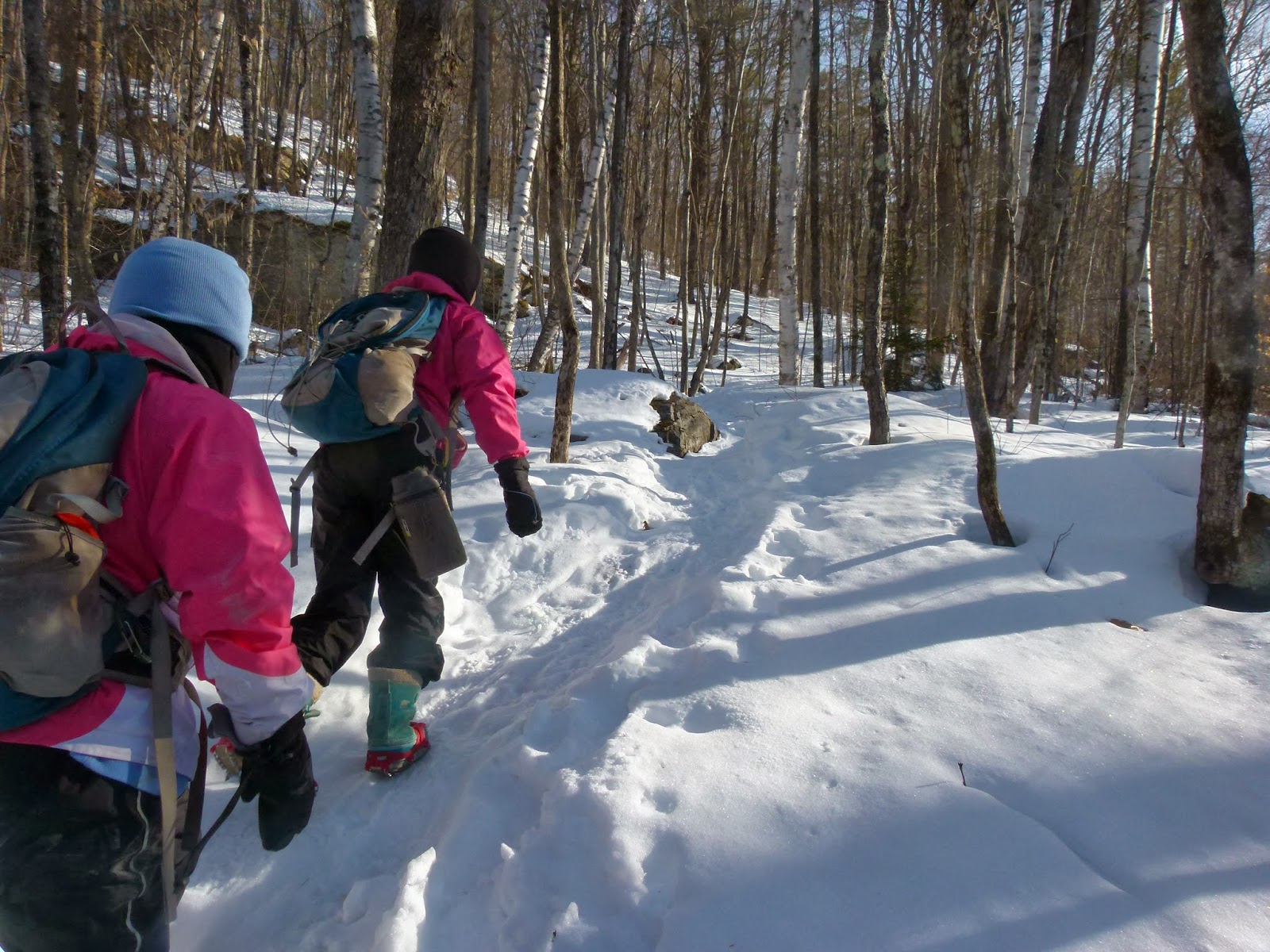 Reaching the first ledge (at 0.8 miles). 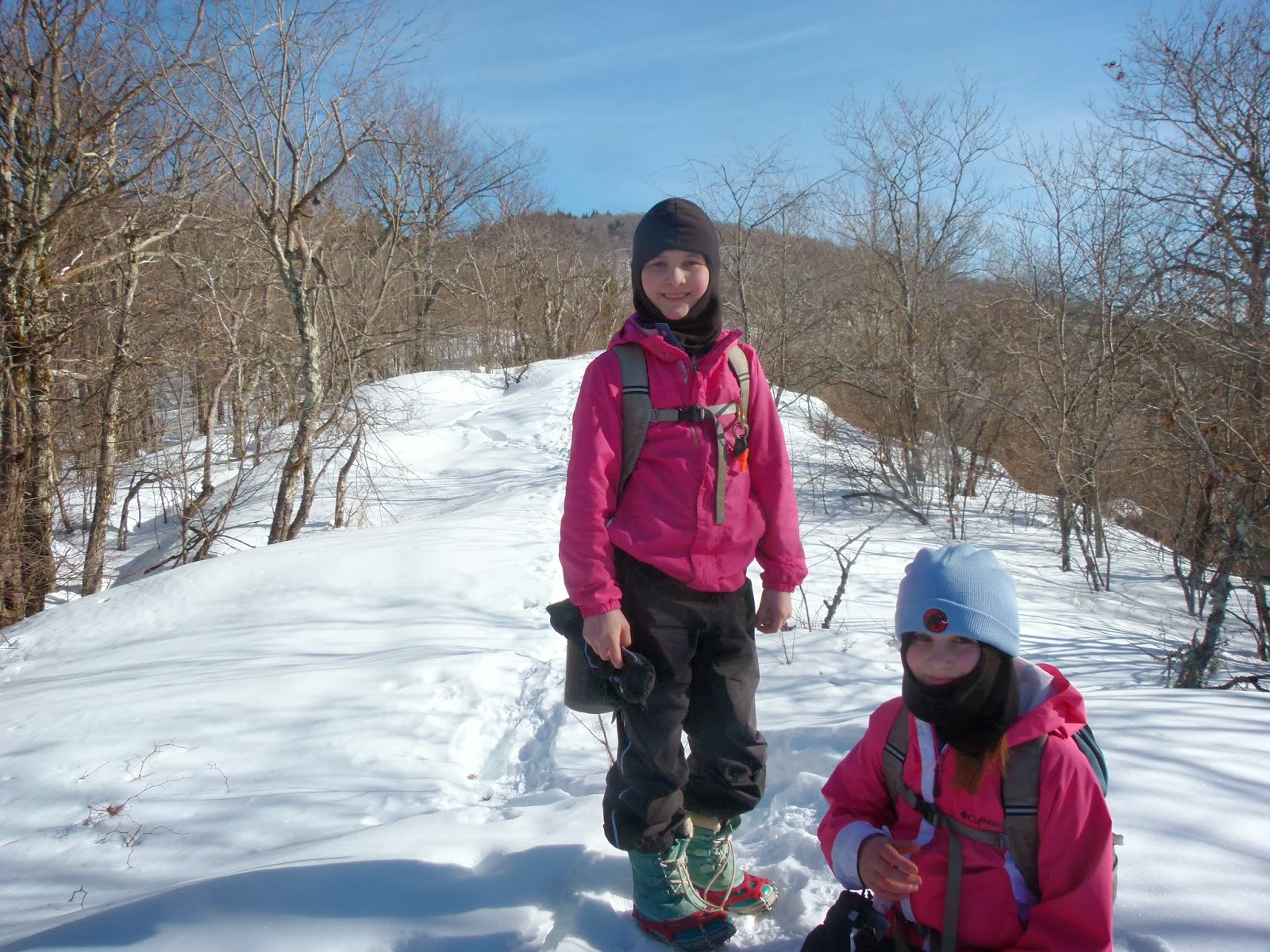 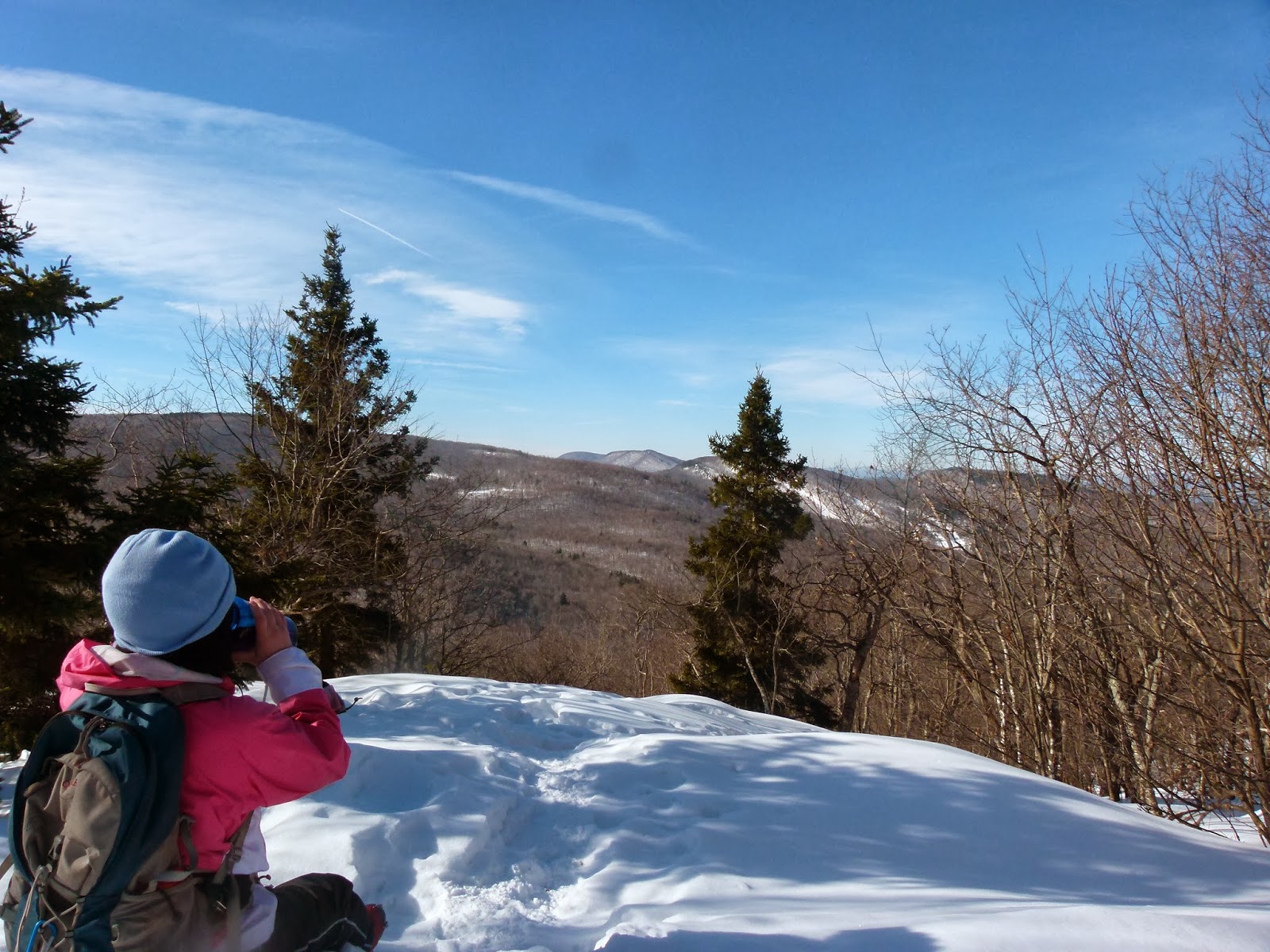 From here to the summit, the path visits multiple viewpoints.  This is one of my favorite 52WAV peak so far -- so many opportunities for gorgeous scenery! 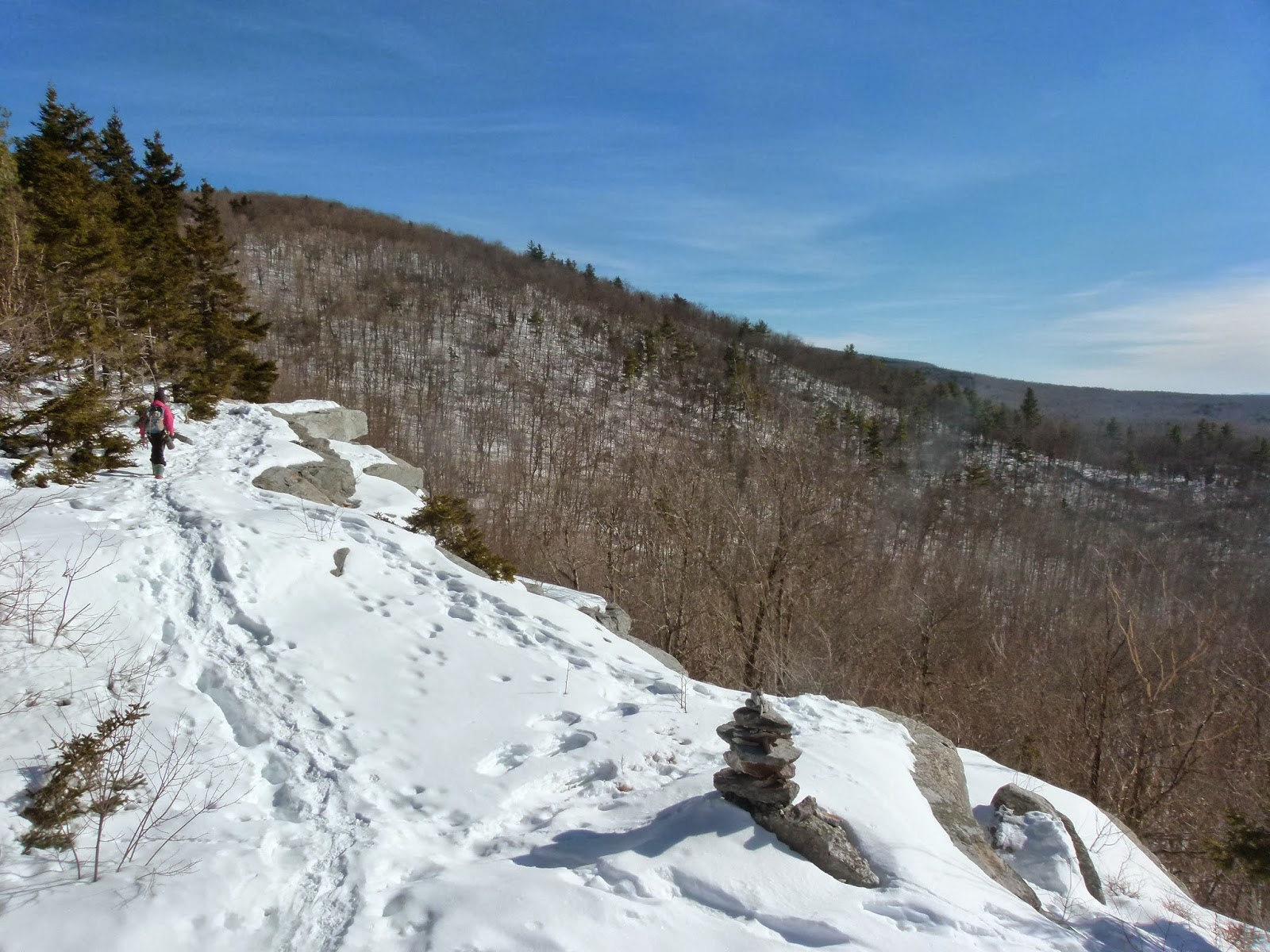 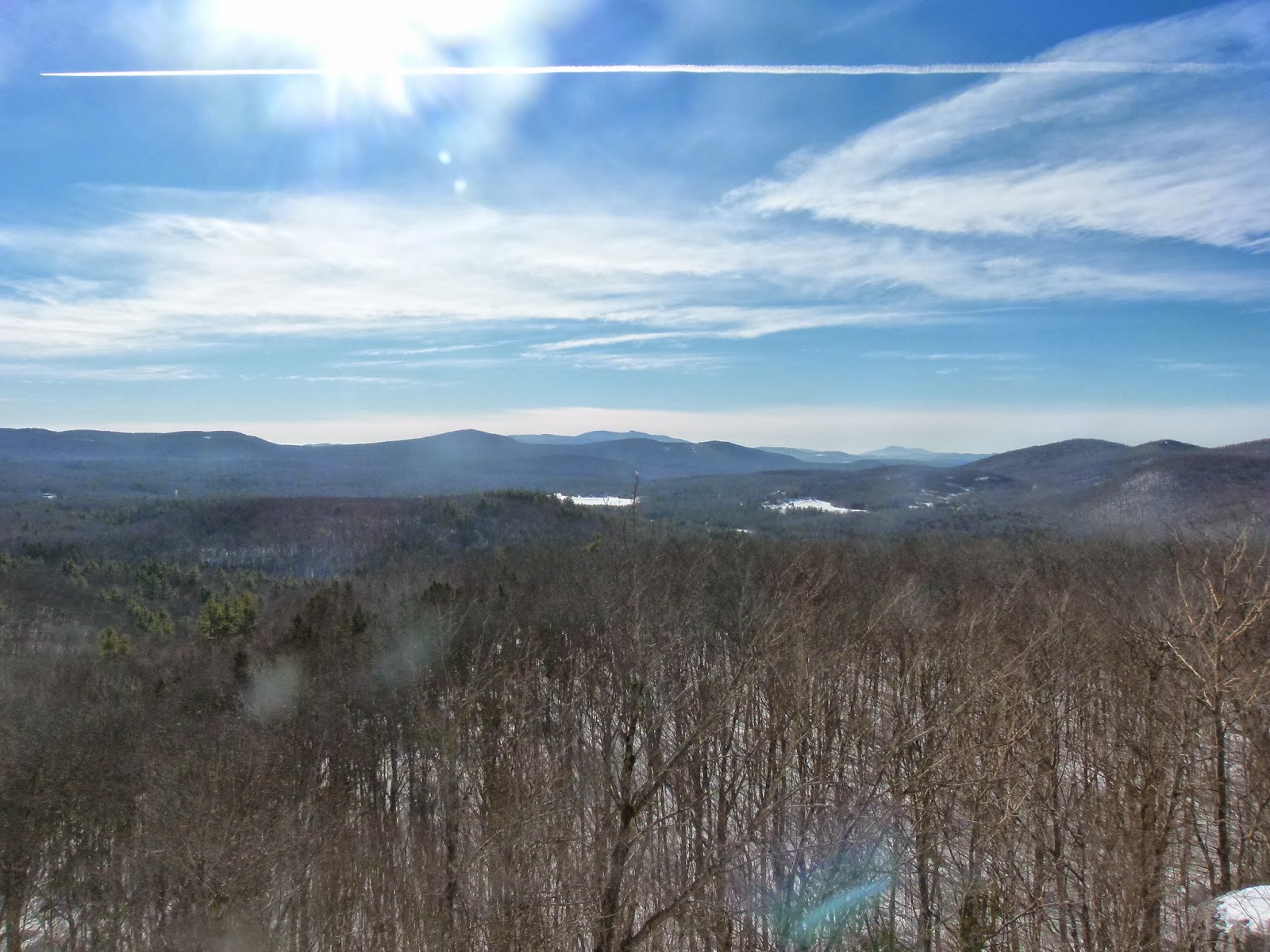 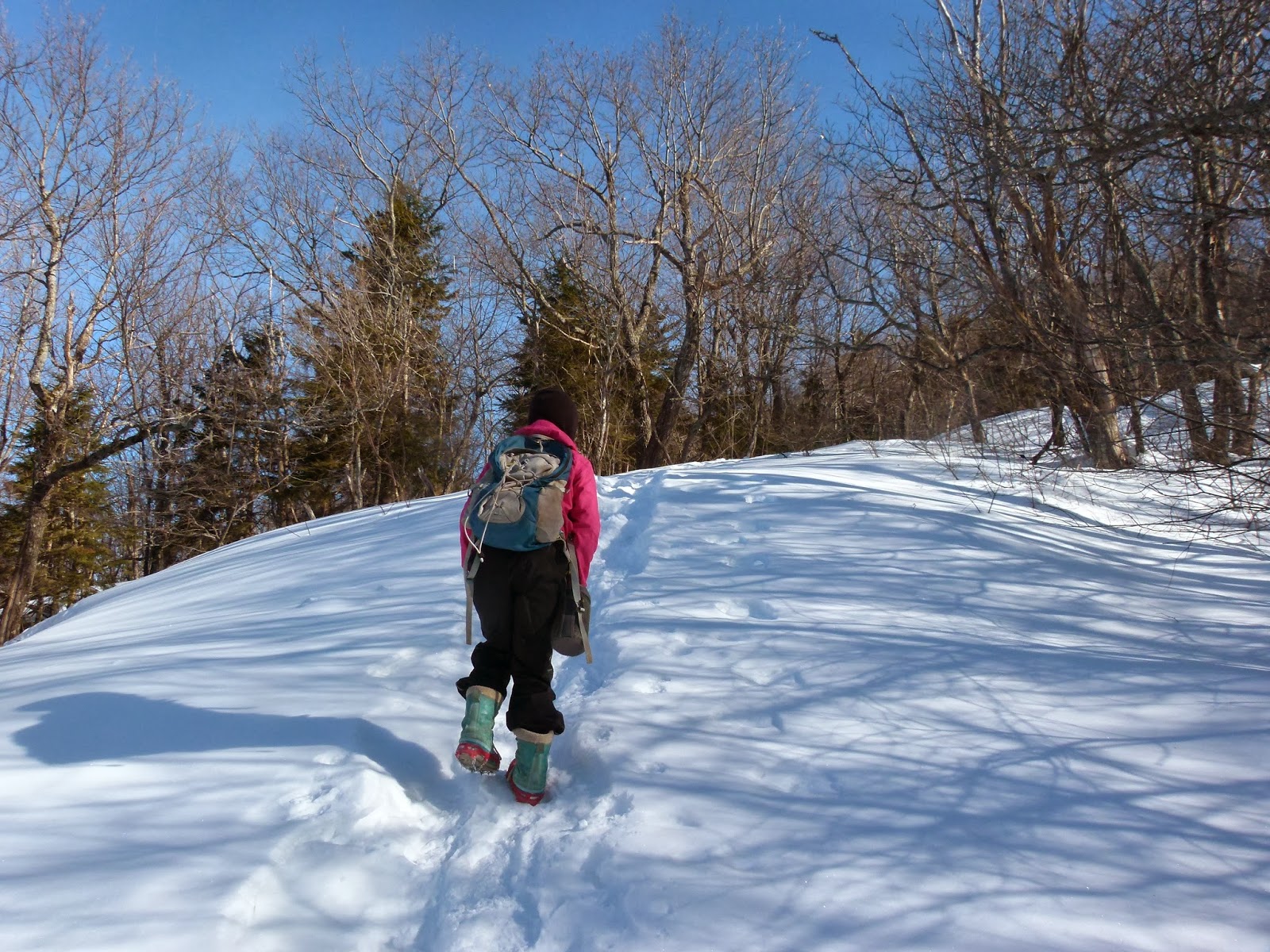 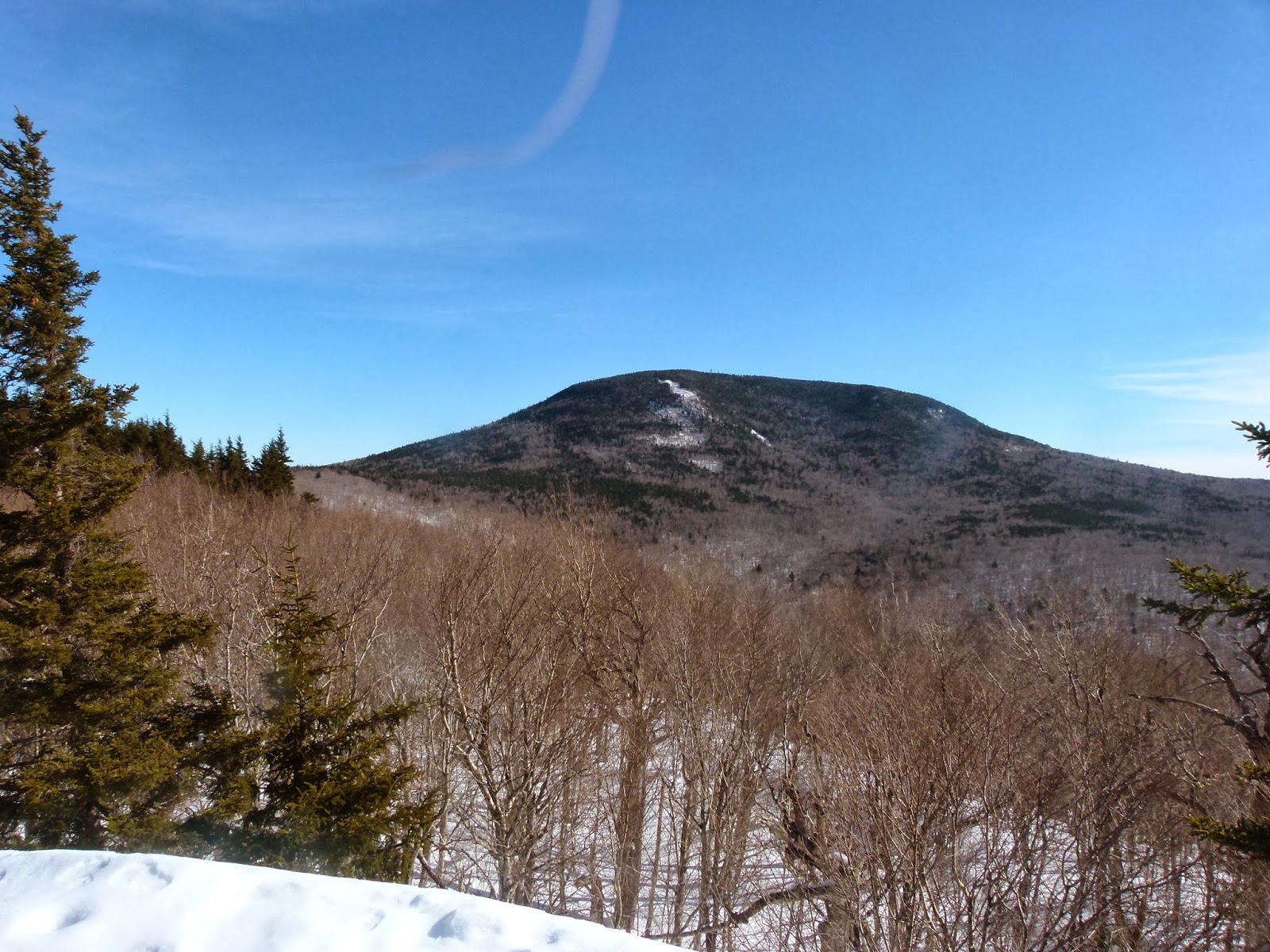 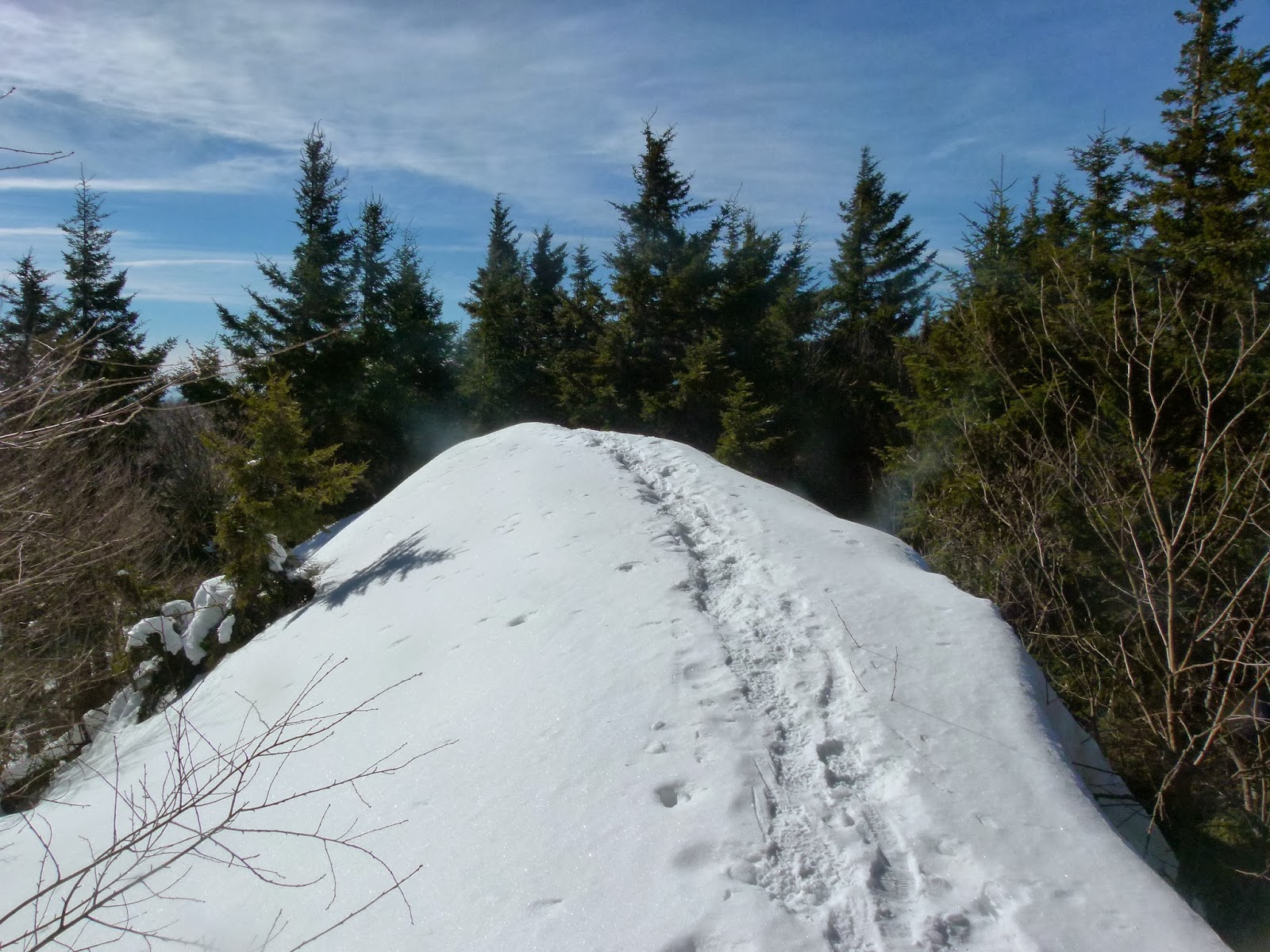 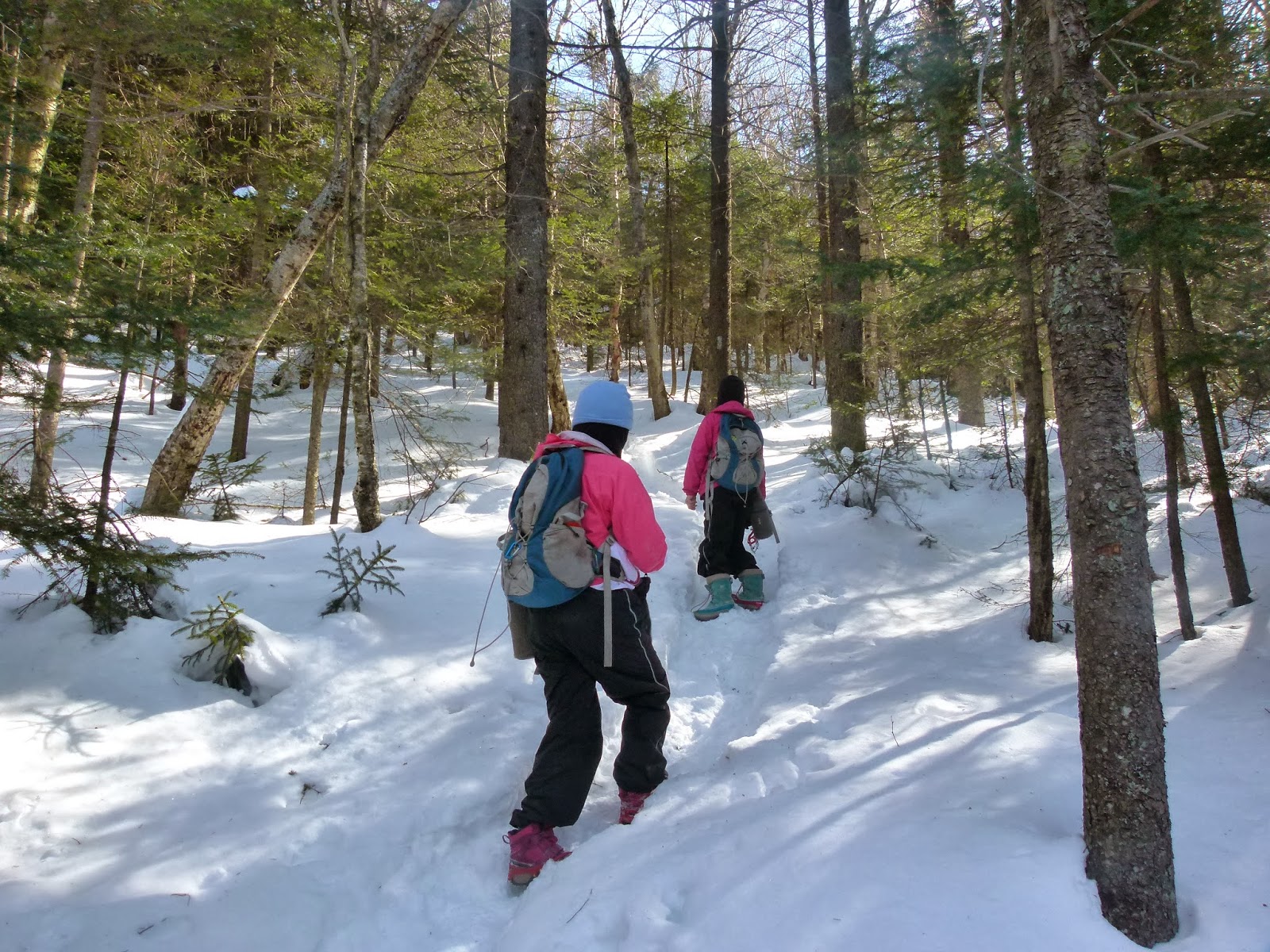 The path was choppy (and firm) on the upper half of the trail.  This didn't bother me...it never does.  These are New Hampshire mountains, and hikers are free to choose how they ascend.  Some folks love to use snowshoes, and others do not.  Those who do not use snowshoes have every right to hike in the winter, though they do make things difficult for themselves once the snow reaches a certain depth.

There are a few (loud) hikers who become furious when they encounter a trail that doesn't look like it's been perfectly groomed...if there are postholes, or anything less than a smooth and obvious snowshoe track, they rail, complain, and insult other hikers online.  I simply don't get that attitude.  Sure, it's nice to have a smooth and firm path in front of you...but I don't expect anyone to hike the way I want them to just so I can have a trail that looks good and is easy for me personally.  These are the mountains...I don't feel I'm entitled to an easy time of it out there.  Yes, postholes can trip you up...but so can rocks, boulders, and roots, and no one expects the trail maintainers to smooth out the trails during the summer.  Again...these are the mountains.  Hike your own hike...and graciously allow others to do the same. 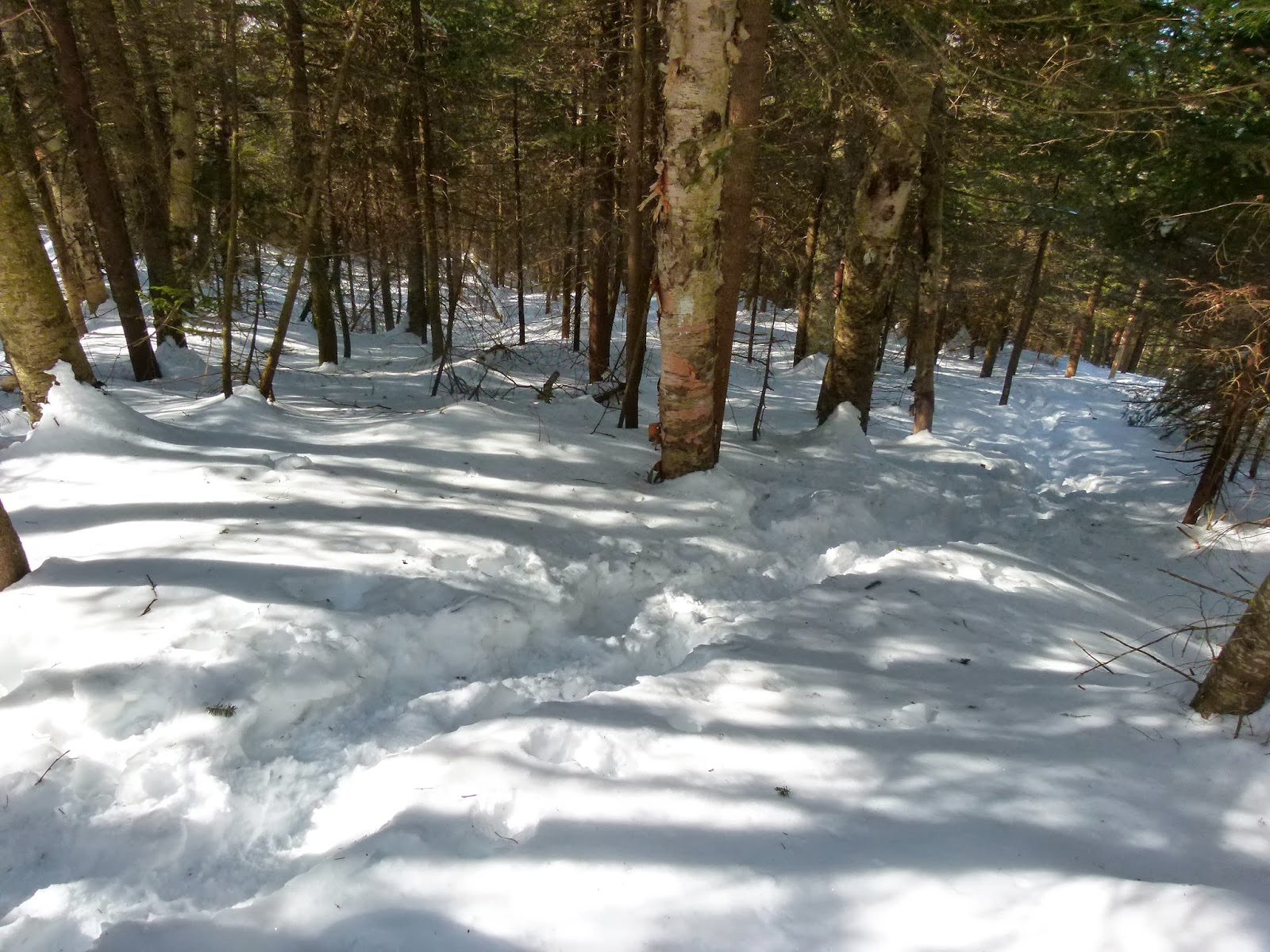 Reaching the intersection with Ranger Trail. 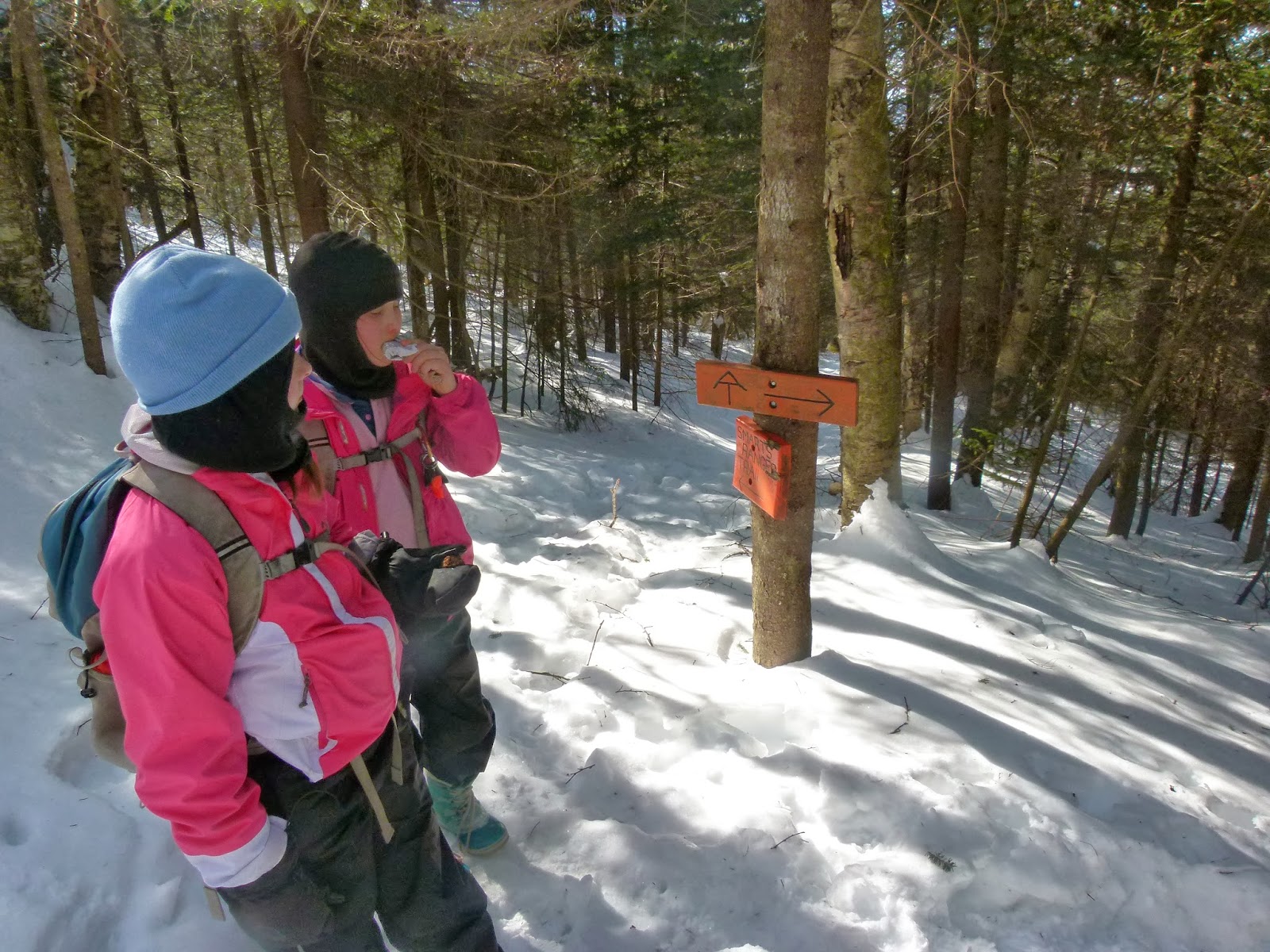 Beginning the last 0.6 miles to the top. 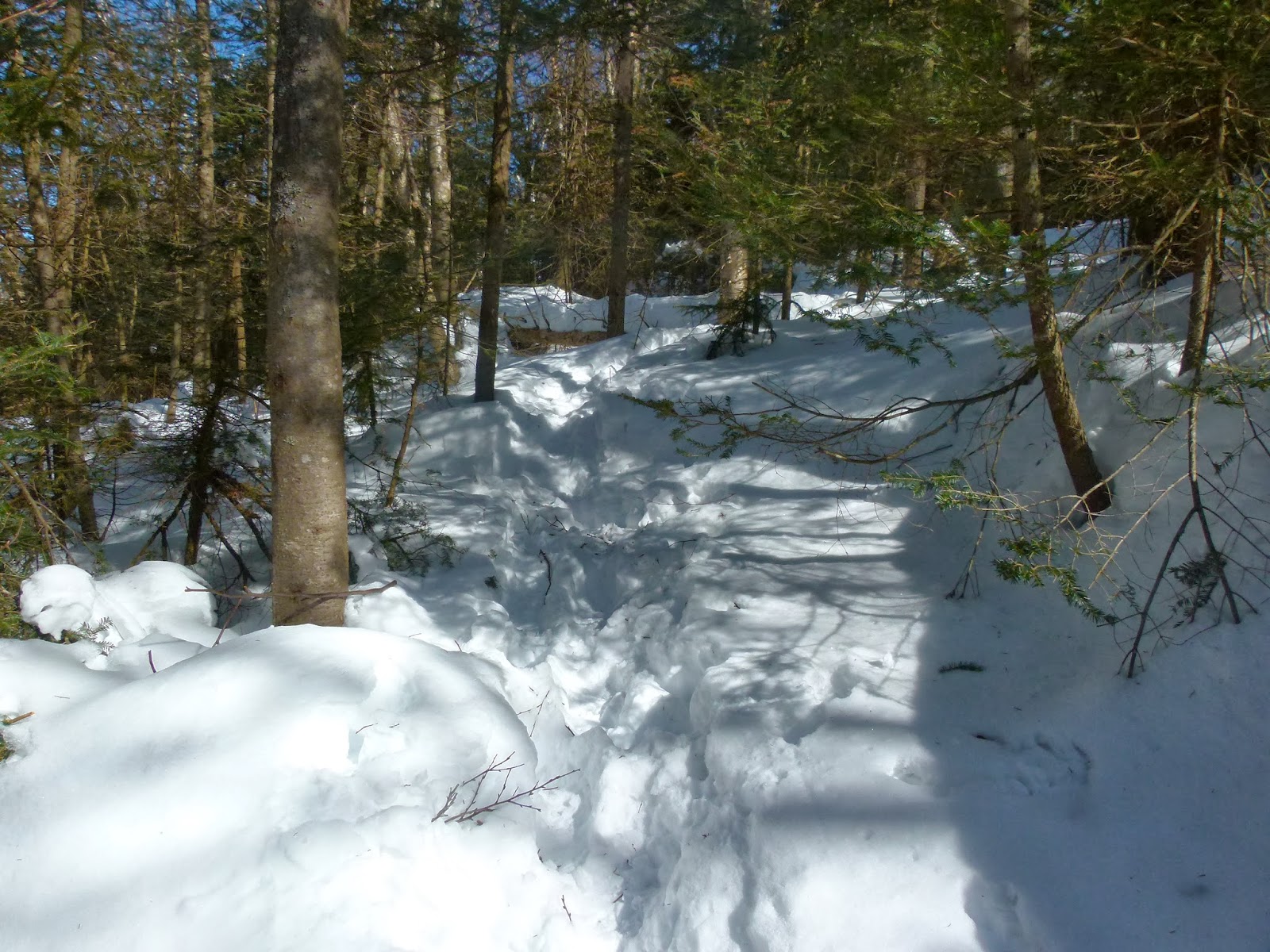 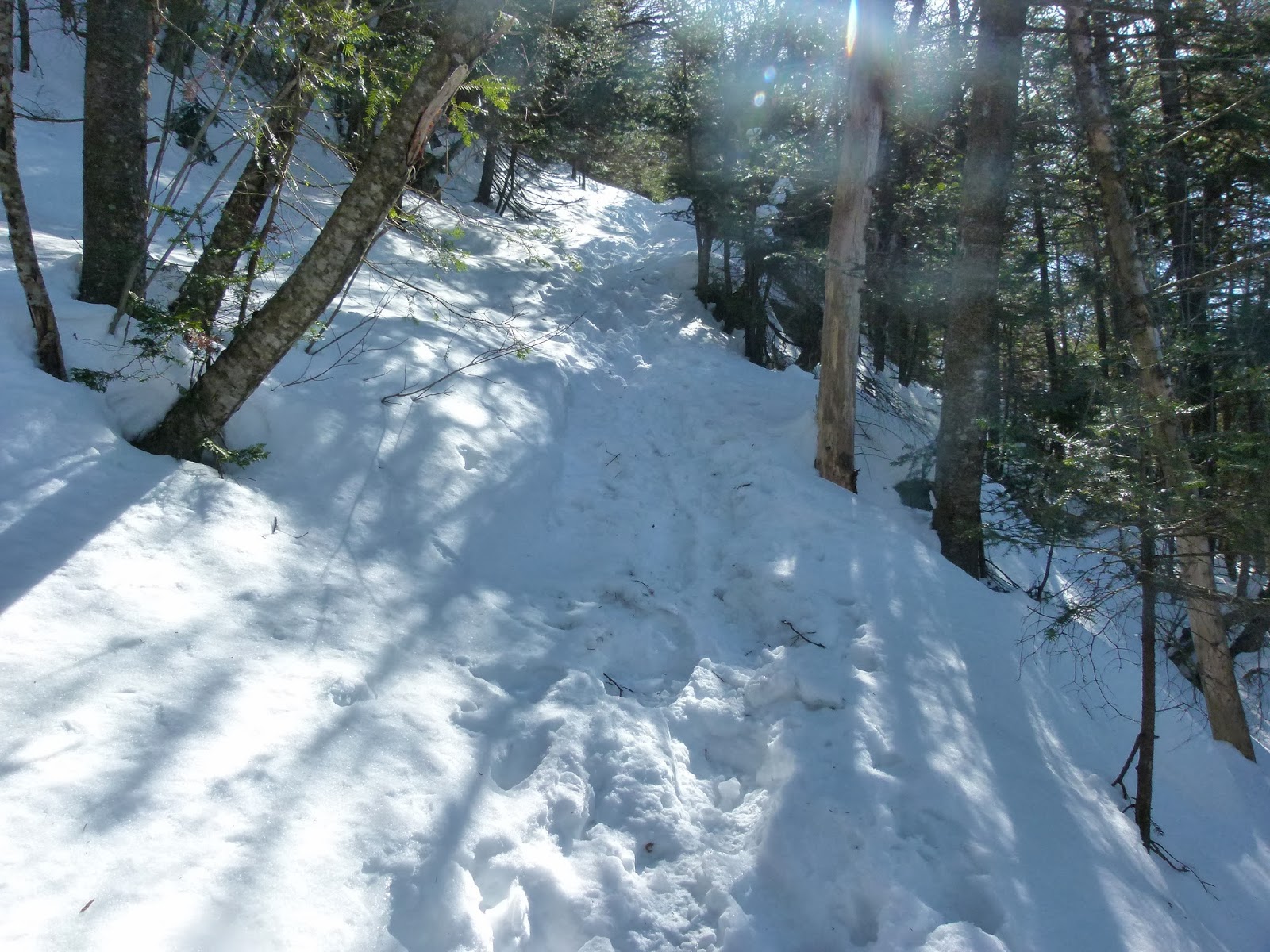 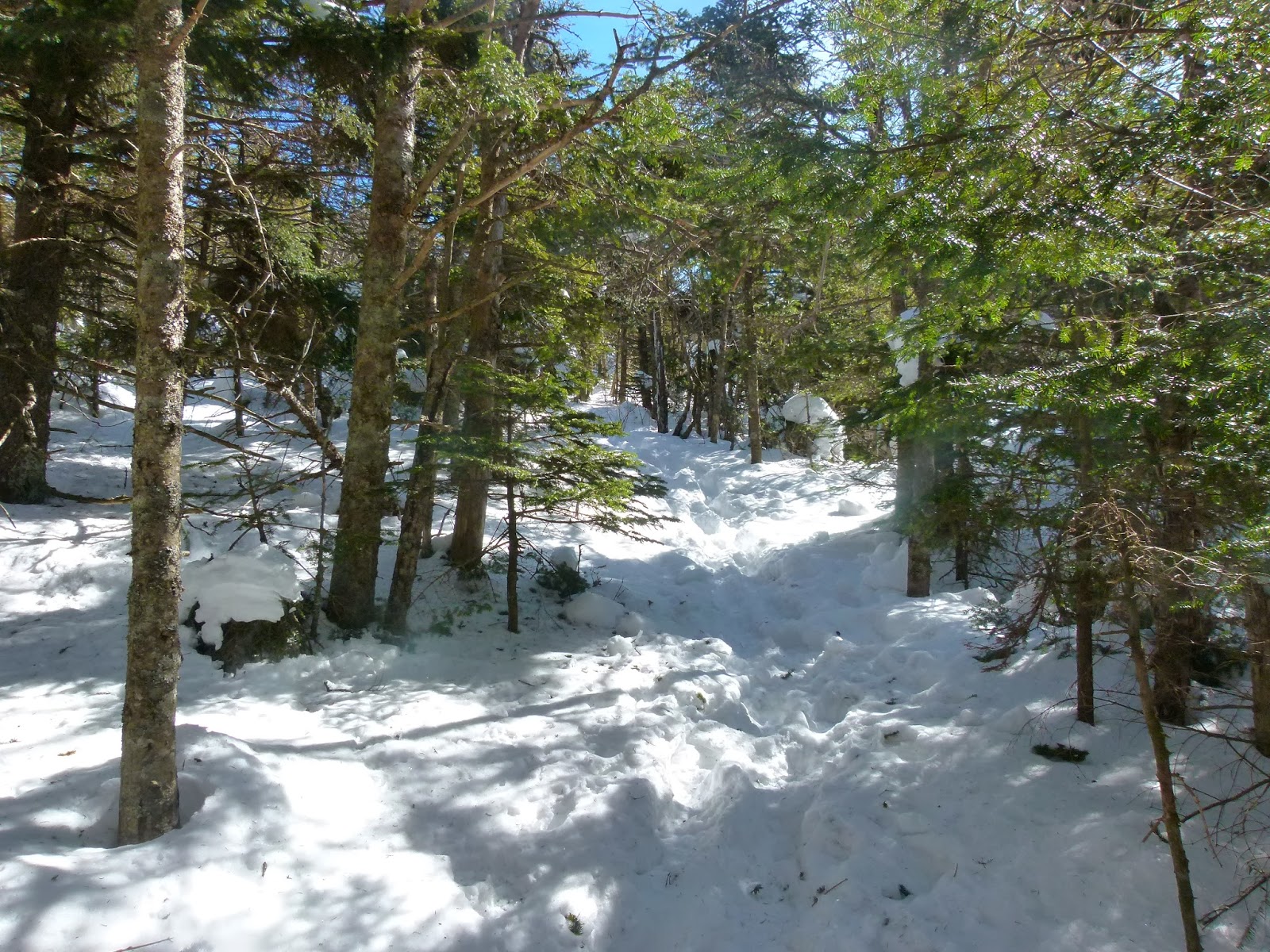 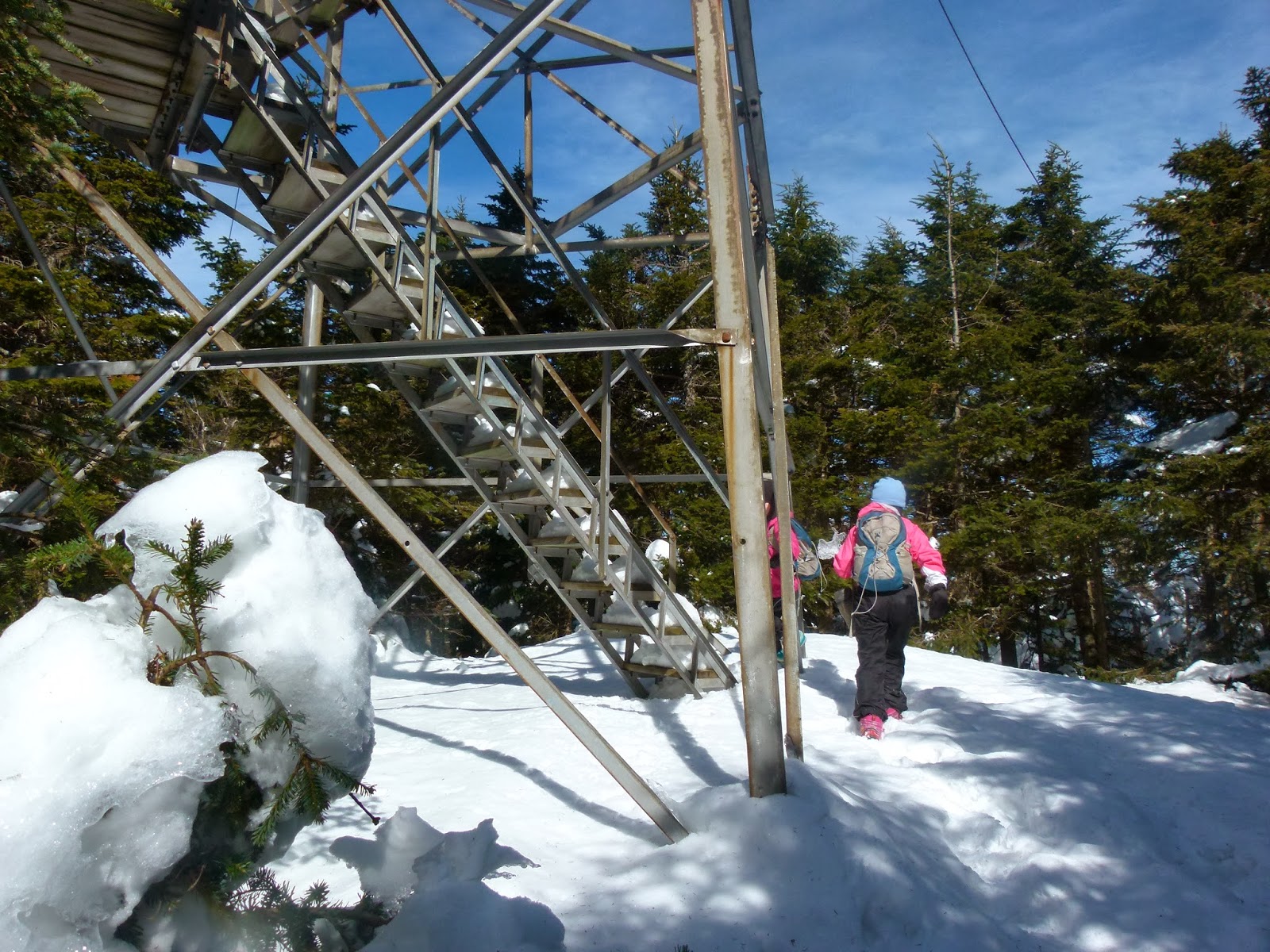 The girls began their trip up the stairs without asking my permission...my kids are old enough and experienced enough for me to trust their judgment, even though those steps were covered with ice. 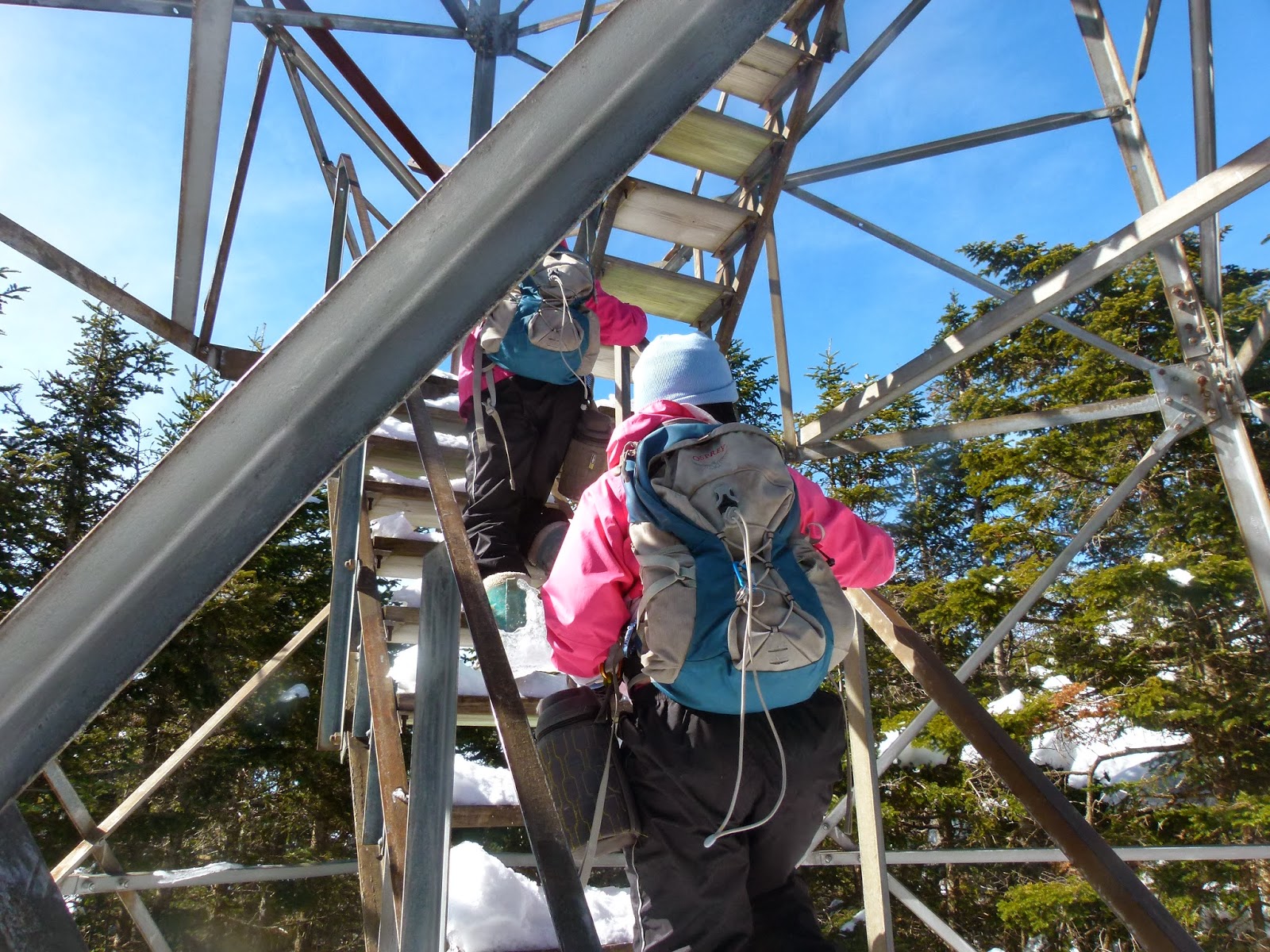 The wind hit us full force once we were just underneath the enclosed top (which we couldn't get into).  Alex and Sage seemed comfortable, but I was frightened.  There's nothing much to prevent a four story fall onto rocks, the wind was forceful, the ice was everywhere...you get the idea.  I wanted to take a slew of photos since the views up there are 360 degrees, but I was afraid to detach myself from the handrail.  I was barely able to get my camera out of its case and snap a couple of shots from my waist (without looking through the viewfinder).  Here are the two photos I managed to take. 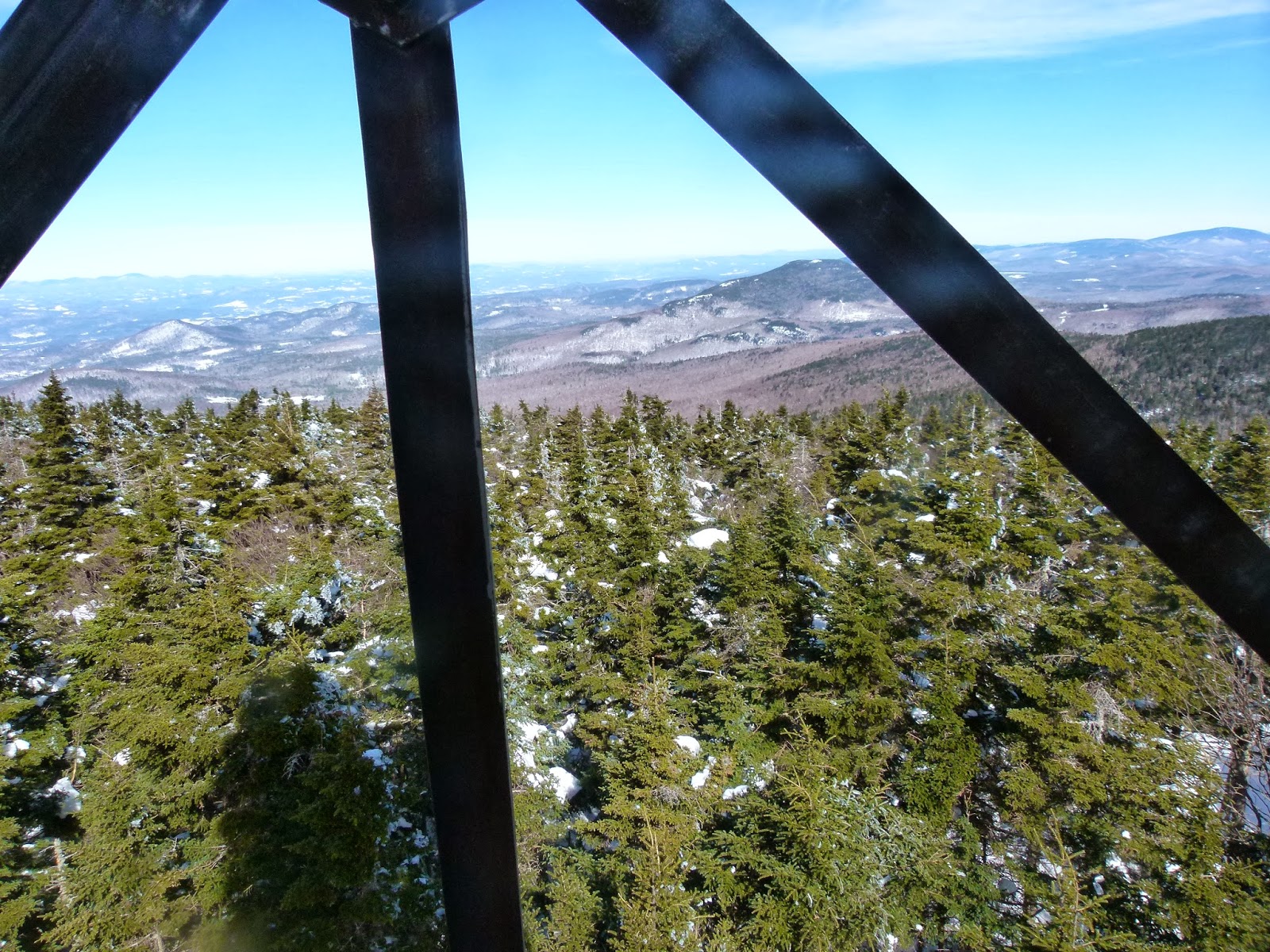 I love the expression on Alex's face.  She's as calm as I am panicked. 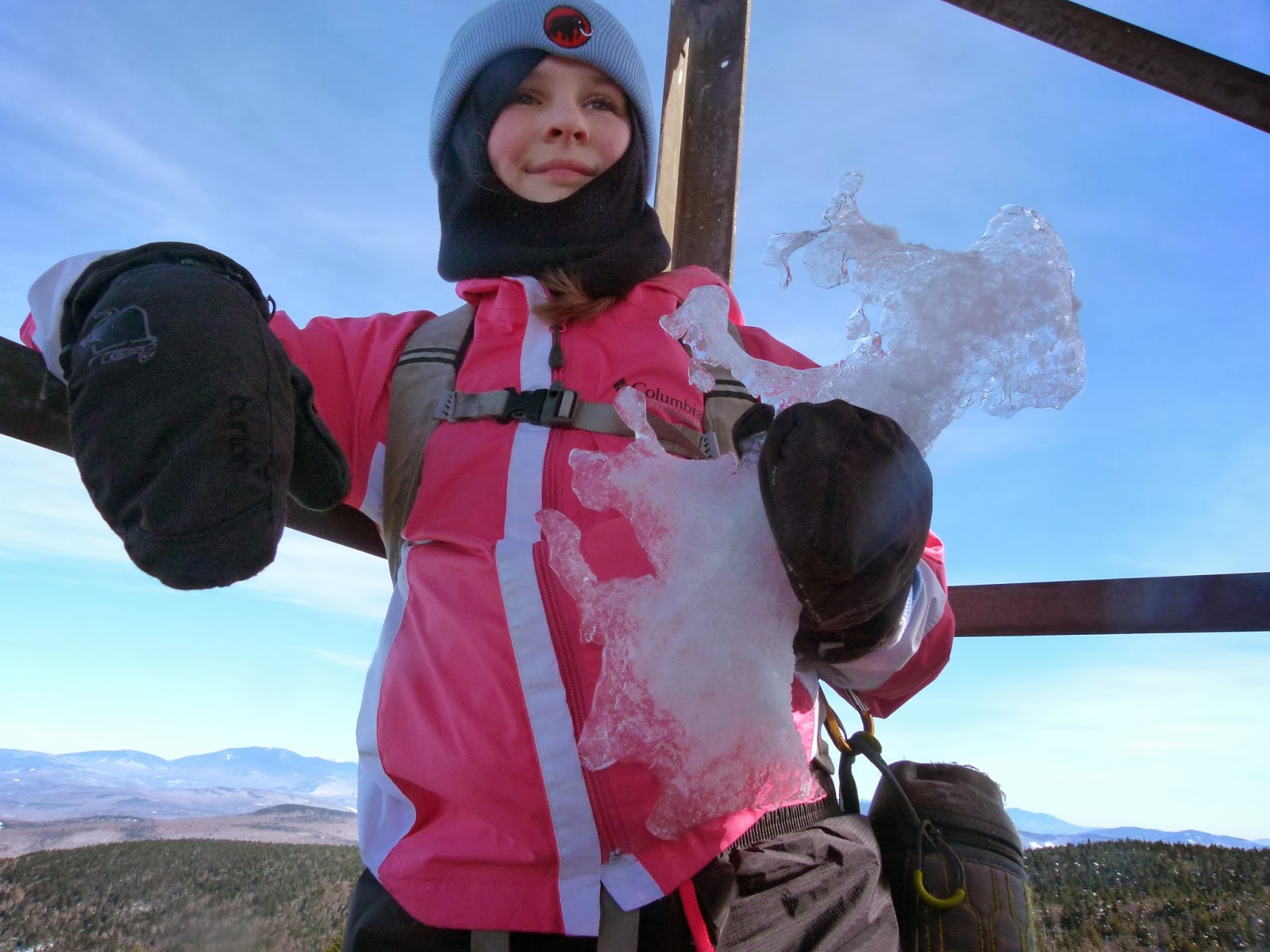 Sage was around a bend and up the final flight of stairs, so I couldn't get a picture of her on the tower.

We didn't spend much time up there as I was extremely worried one or all three of us would fall.  We made our way down, then I snapped this shot of the tower itself. 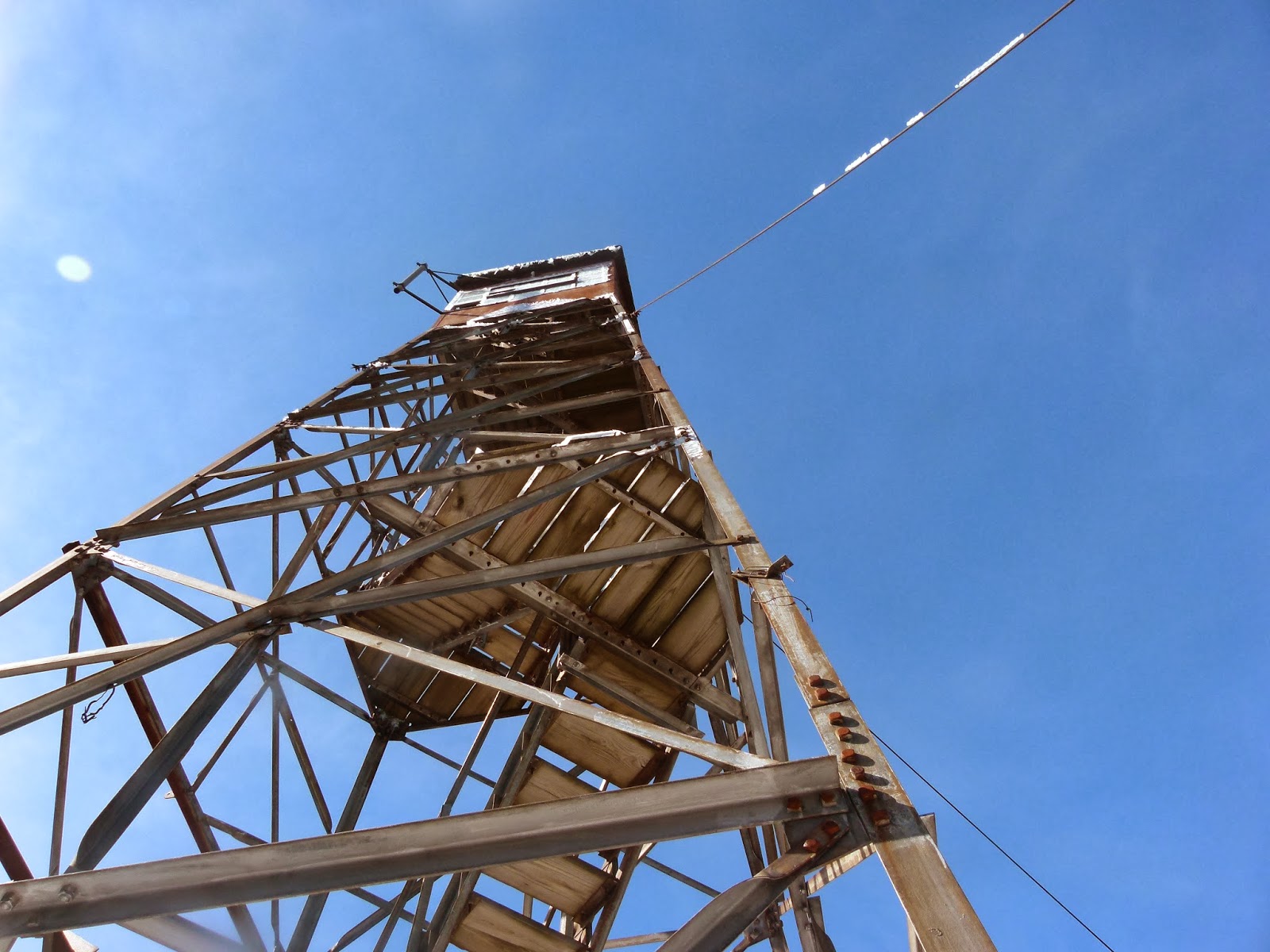 We ate our snack at the nearby tent site, which had a little viewpoint and was sheltered from most of the wind.  Here's Sage, happy about checking off another 52WAV. 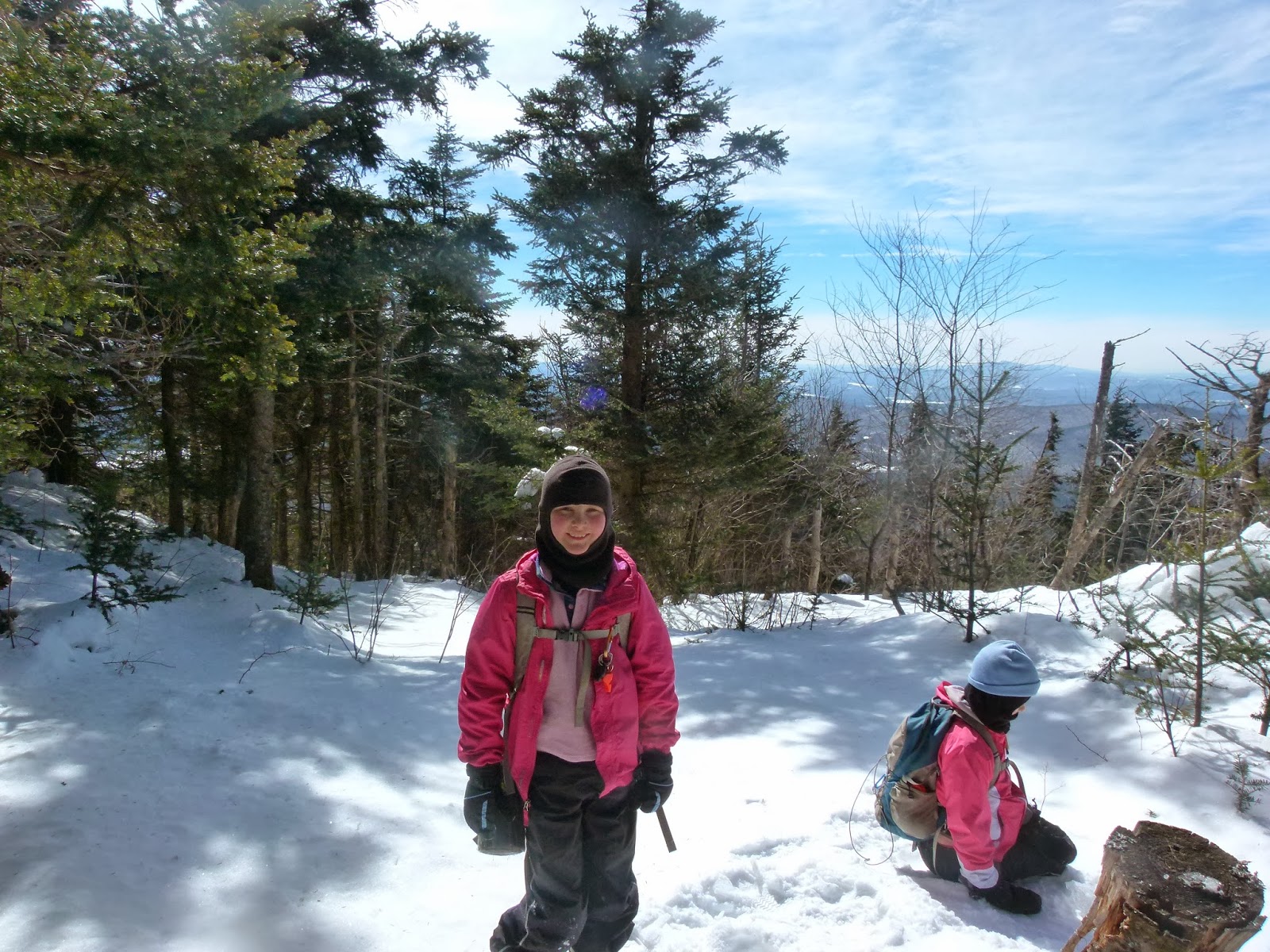 This was a lovely hike with amazing views.  The descent was a bit tricky because of the uneven trail and the softening snow...well, it wasn't tricky for the girls, since their relatively light weight kept them on (as opposed to in) the path.  They therefore continued to microspike it.  I, on the other hand, had to don the 'shoes, and life became difficult for a while since the now-smushy track was uneven from the barebooters.  I kept my eyes open and watched my footing -- just as I do in the summer with rocks and roots -- and made it to the car without twisting an ankle or hurting my knees.

There's another snowstorm on the way for later this week, so I'm not sure if we'll hike on Friday.  If we do, then I'll post our next trip report on Monday, March 17.
Posted by Patricia Ellis Herr, Alexandra Herr, and Sage Herr at 10:40 AM 2 comments: