The Rockwell Road. We drove to the summit, no hiking miles today.

The girls and I slacked our way to the top for this one. Instead of hiking, we took the auto road (highpointing rules allow any method of ascent). 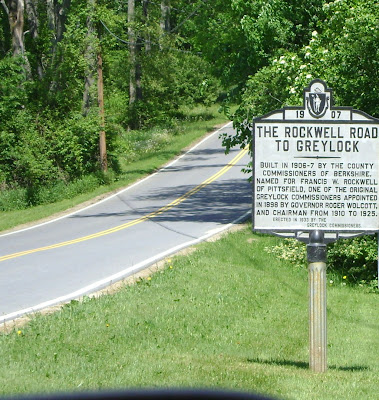 The road was easy to maneuver.

Views from the side of the road... 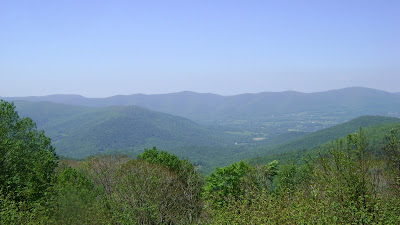 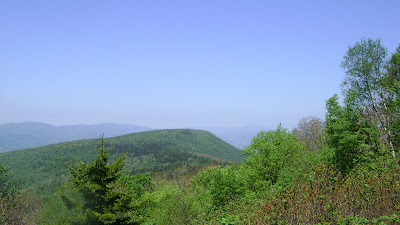 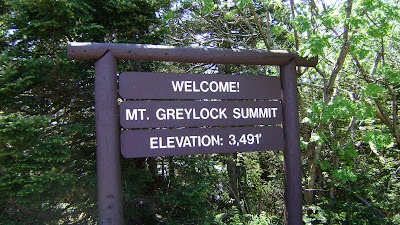 We parked in the lot and took the short path to the summit. Both girls were dressed in their dance recital costumes, which they've been wearing daily since their performance on May 22.... 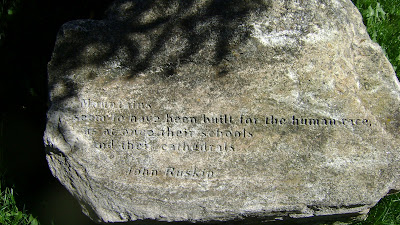 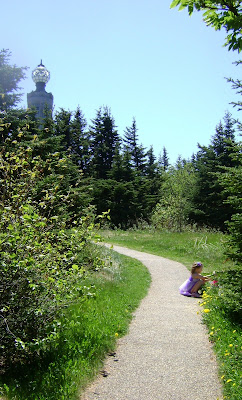 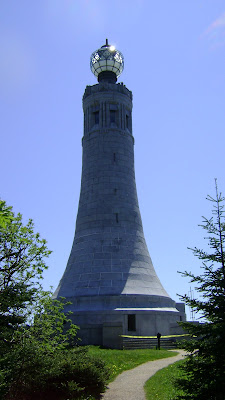 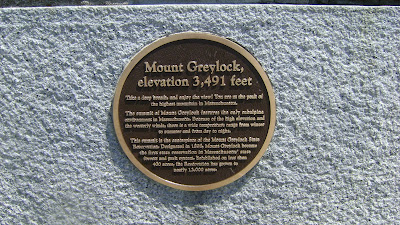 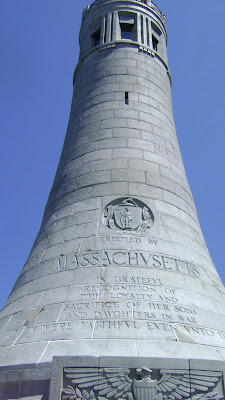 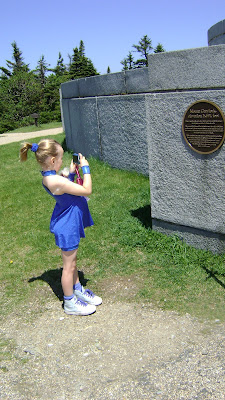 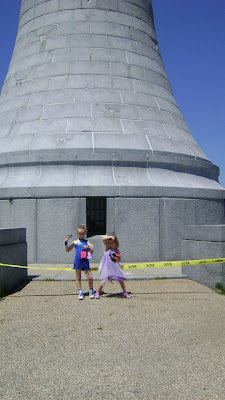 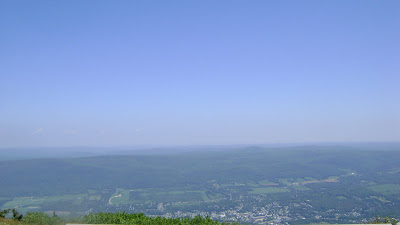 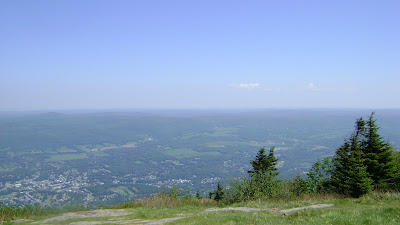 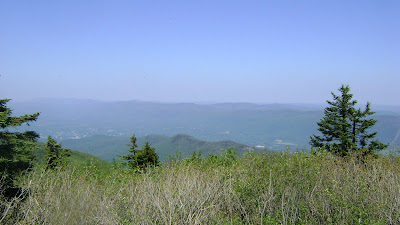 Alex took a bundle of pictures with her new camera... 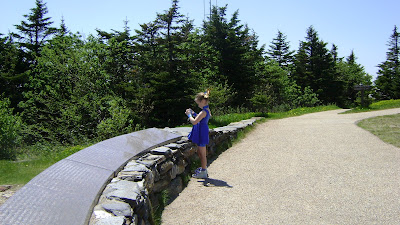 ...while Sage played with her Barbie. 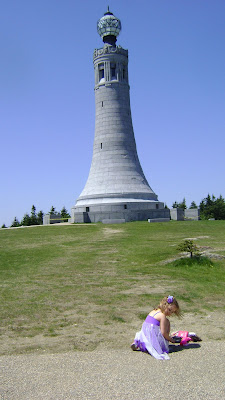 On the way down, we pulled off the road and inspected some ripe dandelions. 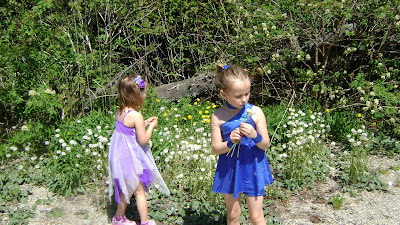 A nice day in the woods...oh, wait a minute...well, a nice day at the top. Felt mighty strange reaching a summit the easy way.
Posted by Patricia Ellis Herr, Alexandra Herr, and Sage Herr at 8:06 PM 1 comment:

Sage and I hiked Mt. Potash today. Check it out at http://sagehikes.blogspot.com/
Posted by Patricia Ellis Herr, Alexandra Herr, and Sage Herr at 10:57 PM No comments:

For Mother's Day, the girls and I decided to tackle another state highpoint. After a lovely morning with Hugh, the three of us took off for northwest Connecticut.

There are two approaches to the trailhead. Unfortunately, we were forced to take both of them. First, we drove south from Massachusetts along Mt. Washington Road (which turns into East Road). We were forced to stop before arriving at the AMC parking lot, however -- a large tree had fallen across the road. Undaunted, we turned around, drove back up East/Washington Road, turned right on Route 41 and then headed down into Connecticut.

An hour later, we were driving north on Mt. Washington/East Road, coming up from the south.

We finally arrived at the little parking lot and readied ourselves for the hike. For the girls, this meant picking up a large stick and walking around with it for a while.

The trail starts a few dozen feet north of the parking lot. The parking lot is in CT, but the hike begins in MA...here's the state border by the side of the road.

We turned left a few feet north of this marker and began our hike along the unmarked, red-blazed trail.

Sage was quite happy to be out of the car and ran ahead of us for a while.

After a couple flat tenths of a mile, the going got steep as we ascended Round Mountain.

We topped out and beheld some nice views.

We then crossed the top of Round Mt...

...and running when we felt like it. Mt. Frissell is the mountain just ahead of us.

We descended into the Round Mt./Mt. Frissell col...

...then went back up a bit until we were near Mt. Frissell's summit.

The blazed path leads to a fork very close to the top...here's a patch of trees in the middle of the fork.

From this point, one takes a left and follows the blazed path to reach Connecticut's high point, or one takes a right and walks fifty feet to the top of Mt. Frissell, staying on the Massachusetts side of the mountain. We decided to visit the highpoint first.

Not long after taking the left, the path winds down the somewhat exposed south slope. Views are plentiful here.

We soon hiked into Connecticut and found the green highpoint/border marker and cairn.

...and here are the girls with theirs.

We lounged a bit and ate our traditional summit treats, then decided to visit the actual summit before heading down.

Standing at that previously mentioned fork, one can turn right and see the summit area. In the picture below, the girls have found the cairn while I stand at the fork.

The cairn, with a nearby register:

We signed our names, then headed down. On the way, we saw some nice flowers...

...a tree that Alex decided "looked like scissors" (she took the photo below)...

The hike took about 2 and a half hours, including the time we used for breaks.

This was the perfect way to spend Mother's Day. Hope all the other Moms out there had a great day too.
Posted by Patricia Ellis Herr, Alexandra Herr, and Sage Herr at 10:33 PM No comments:

The girls and I spontaneously decided to drive down and highpoint Rhode Island today. Jerimoth Hill is about an hour south of our home near Boston, and the hike is only a couple tenths of a mile long.

We hopped in the car feeling scandalous. We had no backpack, no food, no water. And...we were wearing COTTON.

We found the little parking area on the side of the road without much ado and took our usual trailhead photo.

Blatantly ignoring all Hike Safe rules and neglecting to bring even one of the Ten Essentials, we rebelliously entered the woods.

Blazes were plentiful on this pretty, well-maintained trail. The property owners have created a very pleasant path for highpointers.

We arrived at the highpoint in about three minutes...

...and took a picture of one of our homemade Rhode Island flags on the summit cairn.


...while the girls ran around the clearing.

This was a nice, easy highpoint. We look forward to doing at least a couple dozen more in the years to come.