Once in a while, someone writes me and asks, "How do you get your kids to hike?" My answer? I don't. They hike because they want to. If they don't want to, then we don't go. Or, as was the case today, if they start out wanting to, and then they change their minds halfway up the mountain, we turn back. I don't believe in taking a kid up a mountain unless that kid really and truly wants to get up that mountain.

A few days ago, MadRiver invited the three of us on a 4K hike, and he asked us to choose something I thought Sage could handle. I chose Waumbek, one of the easier 4Ks. Sage was enthusiastic about hiking with MadRiver, and Alex didn't mind repeating the peak.

The morning arrived, and the girls were happy and rarin' to go. We started on the trail an hour ahead of MadRiver and his friend Mynetta, since I figured they would catch up to us in short order. 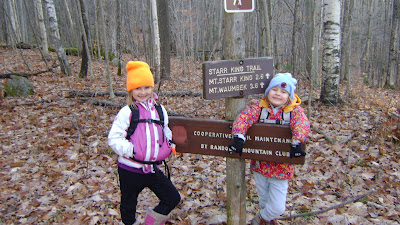 The trail was moderate and covered in a brown crunchy carpet of dead leaves and frozen mud. 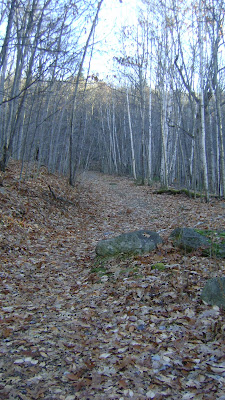 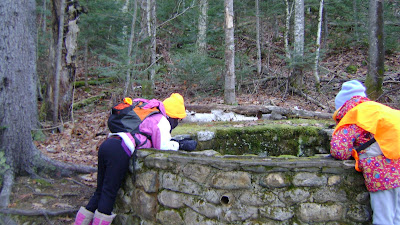 ...after examining it for a few minutes, we continued on our way. 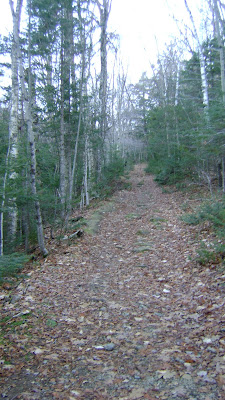 And then, somewhere around the mile and a half mark, Sage's behavior began to rapidly deteriorate. As her countenance grew more and more sour by the second, my mind raced through all the possibilities. Hypothermia? Hardly, it was fairly warm out. Dehydration? Nope, she'd been chugging water constantly. Hungry? She'd been eating her way up the trail. Too much distance? Normally, no -- she did all of Jefferson, Jackson, and Tom happily and with zero complaint. Waumbek should be well within her capabilities.

I asked her several times what was wrong. She kept telling me she was fine, but she obviously wasn't. I asked if she wanted to turn back, but she said no. So we continued for a while...until she began huffing and sniffling and acting as though she basically hated life.

I quietly called Alex back a bit while Sage stomped dejectedly ahead. I told Alex that I was going to turn us around, and that Sage would probably be angry with me for doing so, but that something was obviously wrong and that it would be a mistake to continue.

We caught up to Sage and I told her to sit. She did so, and I explained that I thought it best if we turned back. Her reaction was, at first, furious. She cried frustrated tears and asked me why. She said that she wanted to keep going, that she didn't want to sit there. After allowing her to vent a while, I told her that I didn't think her body was up to it today. That I wanted her to think quietly for a minute and, after a few minutes of rest, if she really and truly wanted to continue, then we would. However, if she wanted to go back to the car, that was fine. Alex chimed in and told her it didn't matter if we got to the top, we could come back next week, next month, or next year. I told her that everyone turns around sometimes, it's no big deal. I also told her she was a strong kid who's already done so much, and that even the strongest of people sometimes just need to go home and rest. Sage contemplated all this for a minute, then said, in a very small voice, "I think I want to turn back."

I swooped her up and told her I was so proud of her, that she just became a Real Hiker. Real Hikers know when to turn back. Alex gave her a high-five, and the three of us turned and began to head down.

On the way, we crossed paths with MadRiver and Mynetta. Sage was embarrassed about turning back -- until MadRiver told her a story about how, last week, he turned back on the Tripyramids because he just didn't feel like continuing onward. That made Sage feel a lot better (thanks, MadRiver!).

The rest of our descent was cheerful. Sage found her smile again, and the girls made a humongous racket while they chased each other down the trail.


When we got back to the cistern-well-thingy, we had some un-summit chocolate. 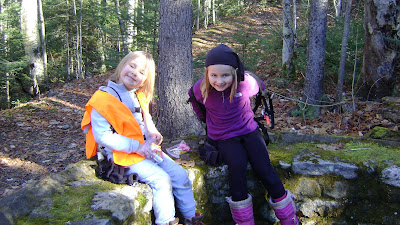 I think this was a good day -- it's times like these when the real lessons are learned. Sage learned that there's no shame in turning around, even if everyone around you feels good to go. She learned that the summit is optional, and that a good time can be had even if we never reach the top. Alex once again proved herself to be a supportive and loving big sister. I learned how completely obvious it is when Sage really doesn't want to hike, even if she's loudly proclaiming that she wants to keep going. Had we continued today, she would've sniffled and stomped her way to Starr King (maybe) and I would have ended up carrying her out. Where's the fun in that?