We had the honor of accompanying our friends Amy and Hartman on their first 4K!  Seven-year-old Hartman and Amy, Hartman's mom, have hiked many smaller New Hampshire mountains over the past couple of years, and now Hartman feels he's ready for the 4Ks.  We were thrilled to be there for his first 4000-foot summit -- he hiked like a speedy pro and then wanted to tackle nearby Mt. Webster before we descended to the parking lot.

This was a fun day and we hope to hike with Hartman and Amy again soon.  I'll let the pictures do the talking -- notice we had jellybeans on Jackson's summit, thus continuing our quest for Desserts on the 48!  :)

This was Alex's fourth and Sage's third time on Jackson (and their second time on Webster). 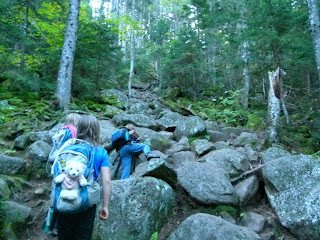 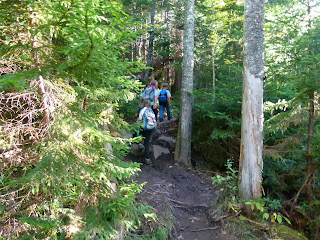 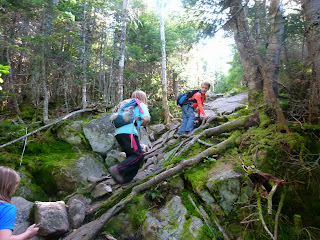 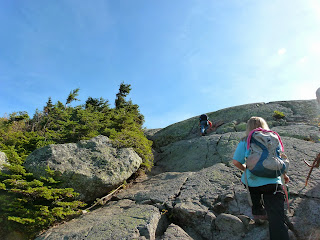 Coming soon -- we begin our preparations for our 2014 John Muir Trail thru-hike!

The girls and I had to be up early the morning after this hike, so we decided to do something short and close to home.  Tecumseh's trailhead is fifteen minutes away from our house, and we "needed" it for our Desserts on the 48 quest, so this particular peak seemed like a good fit for the day.

I've been up Tecumseh at least twelve times.  This hike marked Alex's fourth time and Sage's third time to the summit.

As for desserts...I wanted to bring tiramisu, but the forecast called for muggy conditions and I didn't think the layers would make it to the top intact.  I therefore chose the British treacle tart, which can be served warm.  It was surprisingly easy to make...here's a link to a recipe if anyone's interested...the tart tastes a bit like pecan pie without the pecans.


The day was overcast when we began the hike.  The forecast called for steady rain.  No worries -- Tecumseh Trail never goes above treeline, and we always carry rain gear.
﻿ 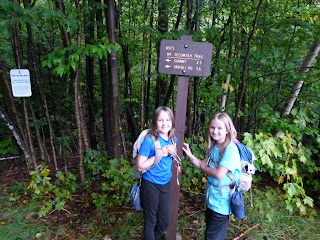 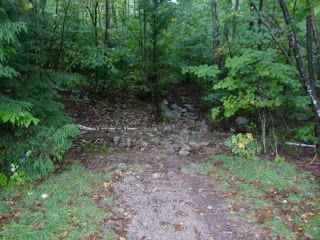 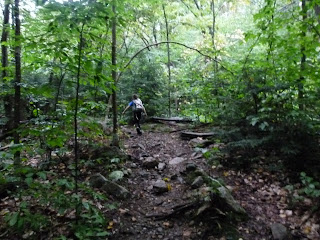 Crossing the water and heading up... 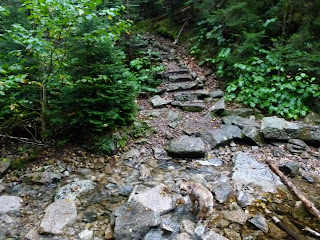 Checking out the view by the ski slopes... 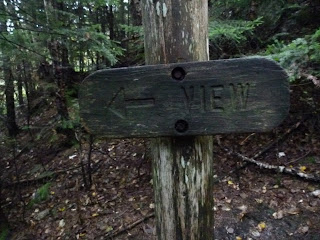 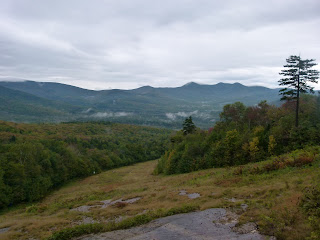 Beginning that one mile of steep and steady up up ups... 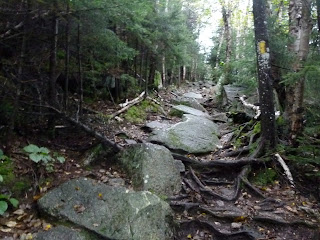 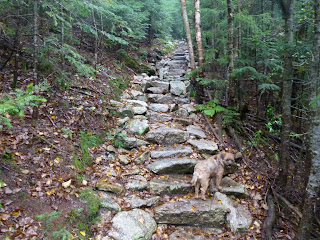 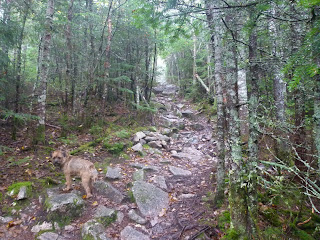 Near the intersection with Sosman Trail... 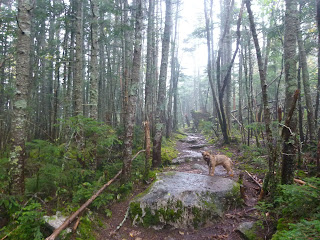 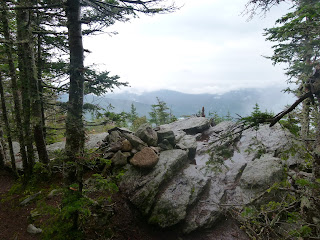 Unfortunately, Tecumseh's summit looks very different now than it did in 2010, when Sage first hiked Tecumseh, and in 2008, when Alex first hiked Tecumseh.  It even looks different from the last time both girls hiked Tecumseh, which was January 2013.  Someone, or a group of someones, has been systematically cutting down trees over the past year or so.  The girls and I were sad to see this.  Not exactly Leave No Trace, people.  Go to nearby Osceola if you want a view. 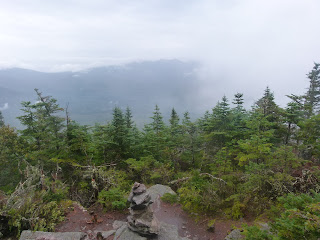 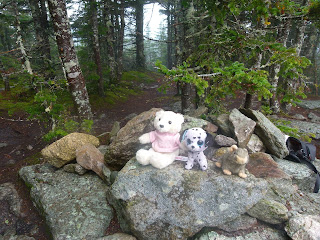 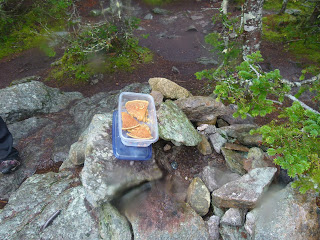 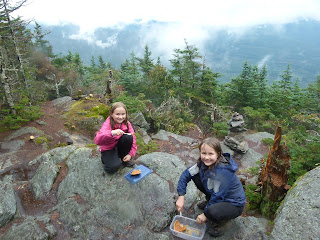 This was a fun, quick trip up a familiar, well-loved peak.
Posted by Patricia Ellis Herr, Alexandra Herr, and Sage Herr at 7:34 AM 2 comments:

The girls and I had a great time on Saturday at Blue Hill Observatory with Buffalo and Tough Cookie!  Dan Szczesny's photo (below) captures the spirit of the day.  :)


Come join us this Saturday at Blue Hill Observatory in Milton, MA.  We're teaming up with our good friends, Buffalo and Tough Cookie, for a fun day filled with hikes and presentations.  The morning session is for girls' groups, and the afternoon session is open to the public.  More information can be found here.  Hope to see you there!
Posted by Patricia Ellis Herr, Alexandra Herr, and Sage Herr at 12:56 PM No comments:

Never forget.
Posted by Patricia Ellis Herr, Alexandra Herr, and Sage Herr at 7:39 AM No comments:

Desserts on the 48 continues!

For this one, we teamed up with kid hiker extraordinaire Isidora and her mom, Kelly.  Alex and I hiked with Isidora in 2009 on Hale, and Isidora joined our family in early 2012 for Alex's winter 4K finish on Flume.  Isidora finished hiking her own round of the NH4Ks last March, and she's hiked dozens and dozens (perhaps hundreds?) of mountains in Vermont and New York.  She's a great kid with lots of energy, and she and my girls seem to make a good team.

Instead of doing the usual Tom-Field-Willey hike, I asked everyone if we could do the less popular, western A-Z approach up Tom (from Zealand Trail) and descend the usual east A-Z/Avalon trails to Crawford Notch.  I'm redlining, which means I'm trying to hike all the trails in the Whites, and I hadn't done that section of the A-Z Trail before.  Everyone graciously agreed to my request, so Kelly and I left one of our cars at Crawford Notch and drove the other car up Zealand Road to begin our hike.

The theme for today's hike was toffee and taffy.  I brought the toffee I'd made the night before...and some Heath bits as back-up, since my homemade toffee tasted a wee bit burnt.


The beginning of our hike -- Zealand Trail.


The three amigas remained ahead of me and Kelly during the entire hike.  We often had to call out to the girls to slow down.  Kelly and I were definitely outpaced on this one.

Zealand Trail is fairly flat, so those initial 2.5 miles zoomed by.  We were at the intersection with A-Z about 45 minutes after we had started our hike.


Lovely view of one of the ponds by Zealand Trail from the A-Z Trail...


I loved this approach to Tom.  The only time the trail felt even moderately steep was during the last few tenths of a mile before the intersection with Mt. Tom Spur.

We reached the Spur, grabbed a quick drink, then continued upward to the summit.


Max on Tom (he never looks at the camera!).


Homemade and store-bought toffee on Tom...

After lounging and eating, we went over to the southern viewpoint.


Alex spelled out her name, and Isidora and Sage's, using sticks...

We hung around for a long time -- much longer than any other time we've ever spent on a summit.  The girls, Kelly, and I had fun shooting the breeze and discussing mountains and life in general.  We met a nice fellow who was just starting to hike again after a two-year absence from the trails.  He plans on doing the AT southbound next year.  If you're reading this, Harrison, it was a pleasure meeting you!

Down we eventually went...

This was a thoroughly enjoyable day.  Hope to hike with Isidora and Kelly again soon.
This was Alex's 3rd and Sage's 2nd time on Tom's summit.
Posted by Patricia Ellis Herr, Alexandra Herr, and Sage Herr at 4:34 AM 2 comments: