Gearing Up for the Holiday Weekend

Alex, Sage and I are getting ready for a weekend of backcountry camping and 4K peakbagging. Hugh will be able to join us, which is wonderful; he works long hours and rarely has the time to get away. We hope the weather cooperates...we don't want to dodge any lightning bolts! Will post our trip report on Tuesday evening.

Enjoy your long weekend, everyone!
Posted by Patricia Ellis Herr, Alexandra Herr, and Sage Herr at 9:43 AM No comments:

Congrats to Sage on her 13th and 14th Four Thousand Footers! The trip report is here.
Posted by Patricia Ellis Herr, Alexandra Herr, and Sage Herr at 11:30 PM No comments:

A Tale of Three Blogs

I originally started the "Trish and Alex" blog to document my oldest daughter's ascents of the 48 White Mountain Four Thousand Footers. Alex was five years old at the time and Sage was three. Being three, Sage was not yet a strong hiker, and I did not want to put any pressure on her to become one. She could not, at that time, accompany Alex on her original round of the 48 4Ks, so I went ahead and titled the blog "Trish and Alex Hike the 4000 Foot Whites."

I also used "TrishandAlex" as my username when I registered with the Mt. Washington Observatory Forums and Views From the Top, two prominent New England online hiking sites. We therefore became known as "Trish and Alex."

Now, however, there's a problem. Sage grew (funny how kids do that) and began hiking too. She's now just as strong as Alex was at her age. She too has hiking goals, she too likes being out there, and she too deserves acknowledgment for her accomplishments.

If you're a parent of more than one child, then you know you have to make things as fair as possible between your children. There's a blog about Alex, so there should be a blog about Sage. Hence Sage on the Trails of New Hampshire.

And what of the times when we all hike together? This, I suppose.

Three blogs. One for each kid, and one for when we all hike together (including our highpointing trips). I think this is fair. Each blog links to the other two; the set-up is very user-friendly.

Now, however, a conundrum. I've a book coming out in April 2012 about Alex's original quest for the NH48. Books and authors require a blog/webpage. Most authors have one blog/webpage. I have three.

Do I consolidate them into one giant blog? I'm very attached to both the girls' individual hiking blogs and I don't want to lose them. Perhaps I could leave each one as it is and post all future messages to Trish, Alex and Sage?

My instinct as a mother is to leave things the way they are. My business sense tells me to consolidate and make things as easy as possible for the public. Some folks don't like to click on links.

The marketing team at Crown, my publishing house, has not told me to change anything, by the way. Nevertheless, I've been thinking about this and would like to figure out the best course of action.

Like us here and follow us here.
Posted by Patricia Ellis Herr, Alexandra Herr, and Sage Herr at 4:42 PM No comments:

This is getting fun. Hiking has always been enjoyable, mind you, but now it feels much more rewarding. I love both my daughters and I enjoy the company of each. Having both of them on the trail at the same time...there's a feeling of completion, of fulfillment. Seeing them interact with each other, watching one of them point something out, hearing their chatter and laughter, even putting up with the occasional squabble....it just feels right. More right than when I have one of them alone.

Sage is showing more and more interest in completing the NH48. Since she's just as strong as her sister was at that age, and since she and Alex make great trail partners, I expect she'll choose to accompany us more often than not from this point onward.

We tackled Mt. Hale today and, contrary to what the title suggests, we had an excellent time. 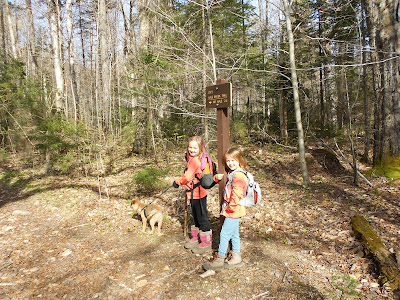 Hale Brook Trail was dry for the first mile... 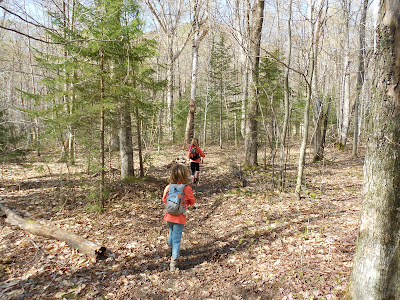 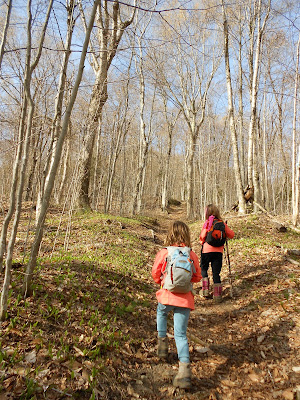 The snow began immediately after the second water crossing. 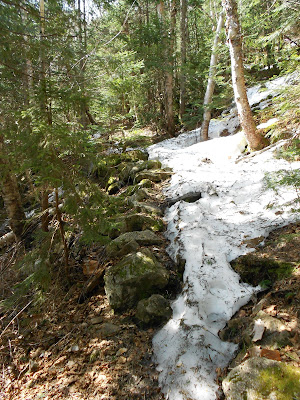 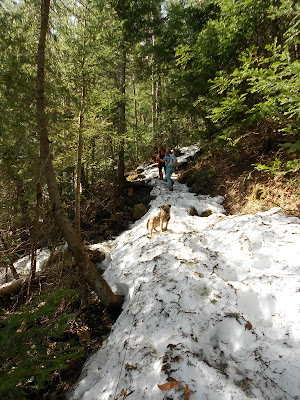 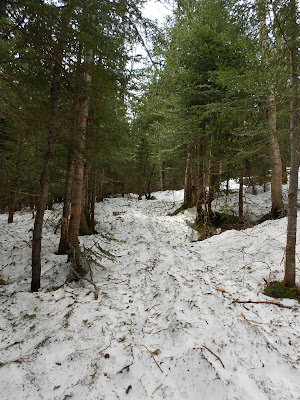 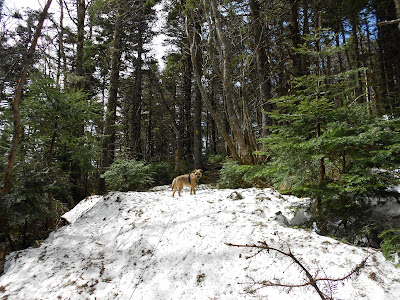 Once past the switchbacks and very close to the summit, bare ground reappeared. 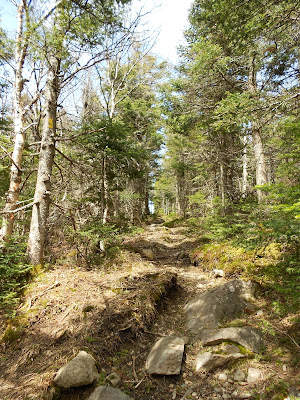 Once at the top, we lounged. 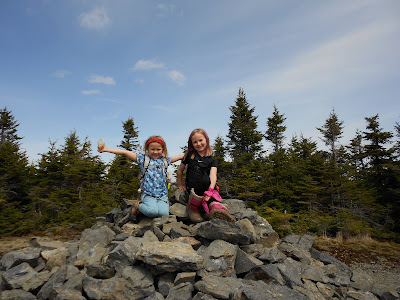 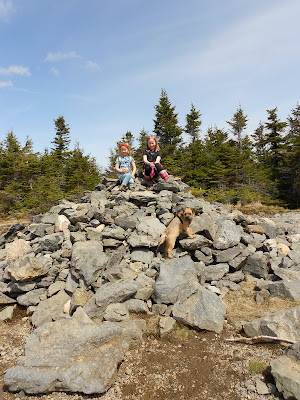 Saw some moose prints in the mud... 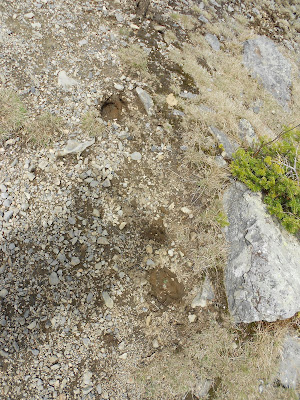 Views from the top of the giant cairn... 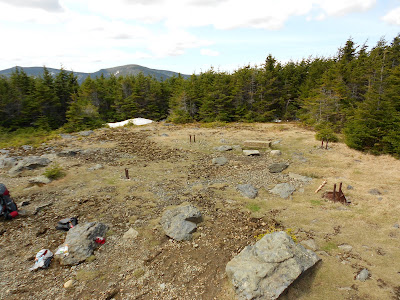 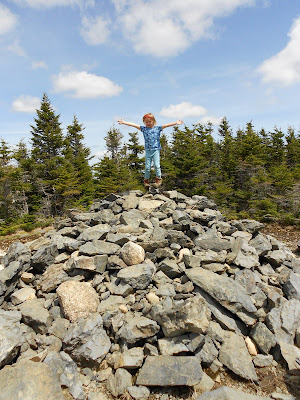 The hike down was easier than the hike up, in spite of the increasing softness of the spring snow. Nevertheless, we were all happy to see the trailhead. 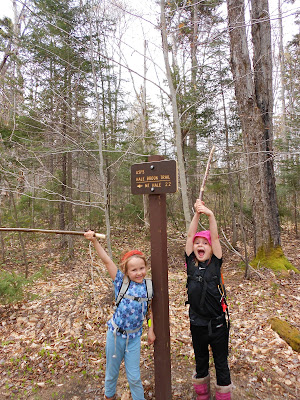 This makes #12 for Sage and #4 for Max the border terrier.

This might be the last entry before my I revamp my blog(s). In eleven months, my book, UP: A Mother and Daughter's Peakbagging Adventure will be published by Broadway Books, an imprint of Crown Publishing Group. It's time to change this blog from something personal and strictly hiking-related to something more public with multiple child- and nature-related topics. The core of this blog will always be hiking and highpointing, so nothing will be lost; I'll just incorporate what's here into a larger framework. 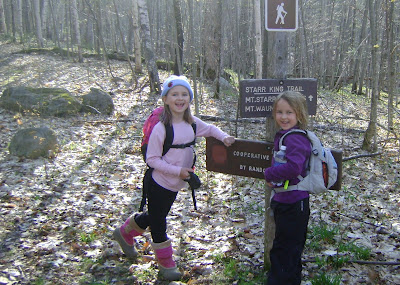 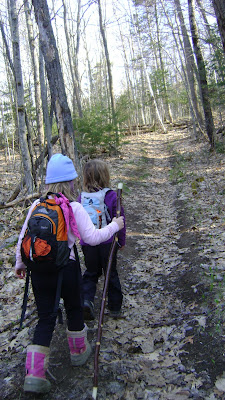 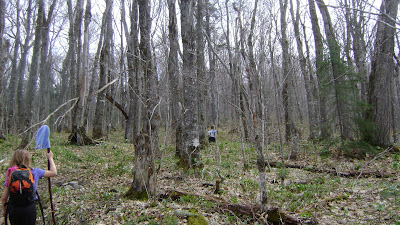 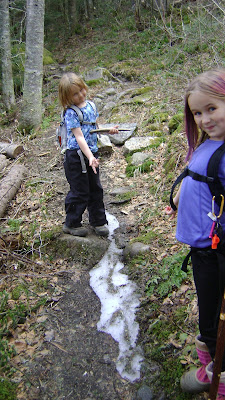 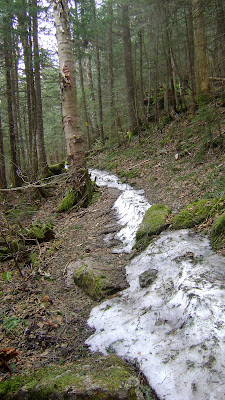 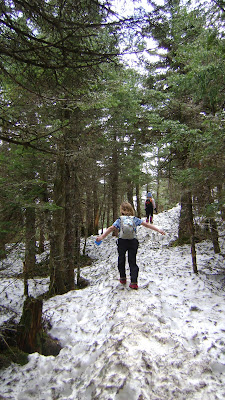 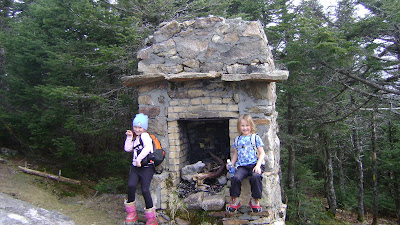 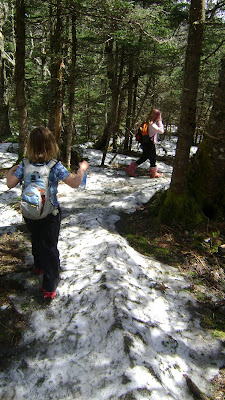 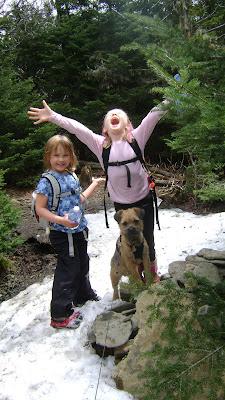 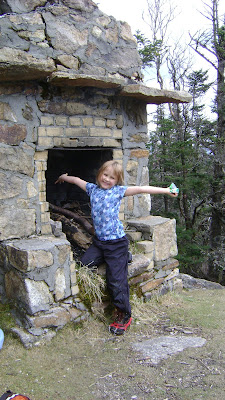 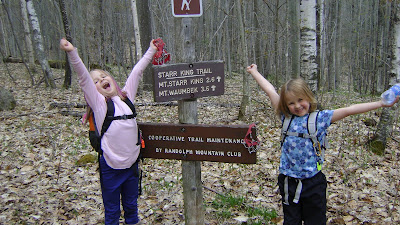 This was a perfect Mother's Day. We had such a good time; Sage and Alex make an excellent team. They are almost equals in terms of height and strength, and they are best friends as well as sisters. Though I enjoy hiking with each girl individually, I now prefer to hike with both at the same time. Though each is strong on her own, when they are together their strength and happiness multiply. They point things out to each other, they help each other over various obstacles, they play games with each other, they converse about everything under the stars, and they make each other laugh. Hiking with them is a true pleasure; I am grateful for my good fortune.
Posted by Patricia Ellis Herr, Alexandra Herr, and Sage Herr at 9:09 PM 2 comments:

Back in the Whites

The girls and I are back in the Whites. We'll be all over the New Hampshire mountains this spring and summer; Sage's ascents will continue to be chronicled here, and Alex's here. When the three of us hike together, the trip is always reported on Hiking New Hampshire and Highpointing the USA.
Posted by Patricia Ellis Herr, Alexandra Herr, and Sage Herr at 11:04 AM No comments: