*****
The girls and I have hiked a bit since we did Monroe on the 22nd, but we've kept to low and flat trails so we could include our dog.  Our border terrier doesn't like deep snow or frigid temperatures, so any canine winter hiking must be done on trails in the valleys.

Ski lessons will dominate our free time during the next six weeks, so the girls probably won't ascend another mountain on foot until late February.  I personally will continue hiking mountains, since I usually hike solo once a week, but I almost never post trip reports when it's just me.  When I go off into the woods on my own, I don't like to take many photos.  Documenting hikes with the girls is a pleasure.  Documenting my solo hikes (beyond posting a New England Trail Conditions report) feels like work.

I am not yet sure if we are hiking a long-distance trail this summer.  We will use our Terrifying 25 list to prepare for Idaho's Borah Peak, and we have a non-hiking trip planned, so I don't know if we are going to have the time or the funds to fit in a thru-hike.  We shall see.  I should know what we're doing by the end of this winter.  We have ideas....we just need to see if we can make those ideas work in terms of time and money (we pay for all our trips 100% out-of-pocket...the charity money we raise goes directly to the charity, not us).

If I don't post again until mid-February, then I hope you all have a wonderful start to the New Year.  Happy hiking, and be safe.

Happy birthday to me!  And, happy almost-healed-foot to me!  The foot thing has been frustrating, because nothing serious was technically wrong with it.  Soft tissue damage or some such thing.  No broken bones and no ripped tendons...if my foot is going to hurt enough to keep me off the trails for over a month, then I want serious drama and nasty x-rays to make it worth my while.  Anyway, the wussy soft tissue thing seems to be 99% cleared up, so we were able to get out.

Monroe was our objective.  We arrived at the lower parking lot by the Cog around 7:00 am.  Only one vehicle was there before us -- it was owned by Rob, a fellow we'd later meet on the trail.

The trail was packed solid from the weekend traffic.  My snowshoes got a free ride on my back all day long.  The girls and I made relatively short work of the relatively flat 1.3 miles to Gem Pool...though my body felt relatively heavy and relatively out of shape. 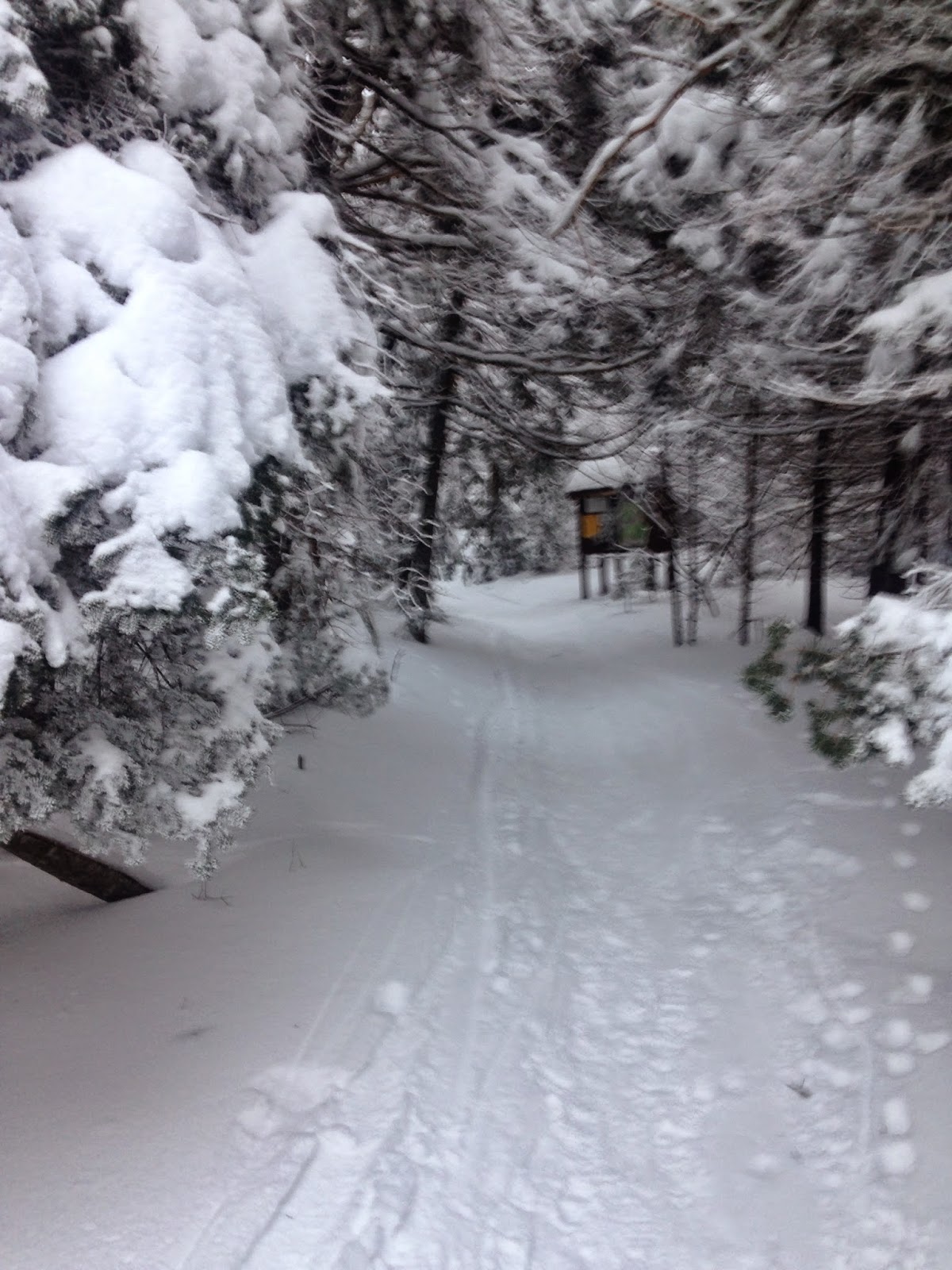 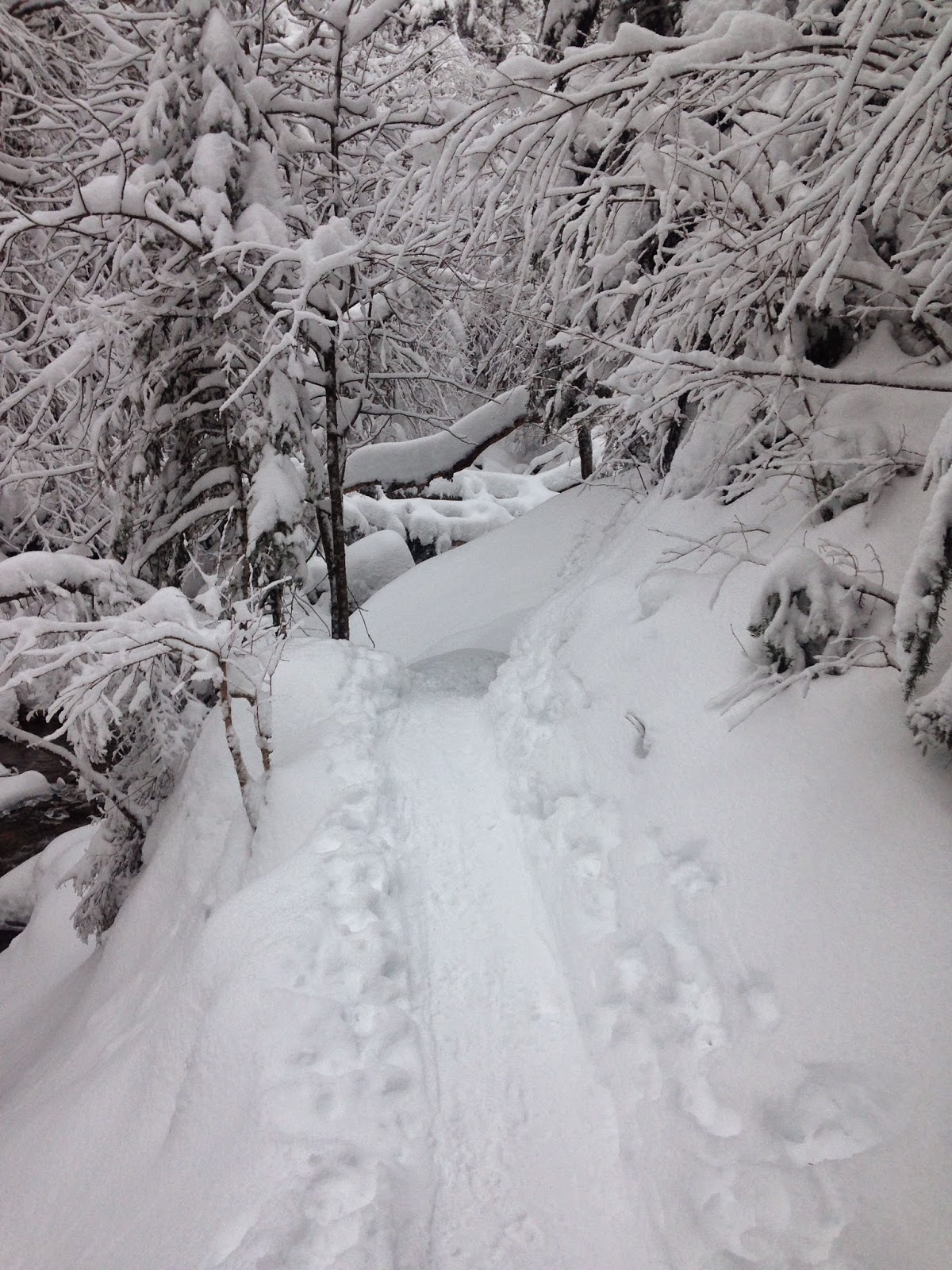 On the way to Gem Pool, we passed Rob...we saw him again after we stopped to delayer and take a quick rest.  He was headed to Mt. Washington.  We set out ahead of him from Gem Pool and didn't see him the rest of the day -- it was nice to meet him and I hope he had an excellent hike.

Up, up, up....up we went.  The girls were glad they wore their Hillsound Pro crampons.  I wore microspikes...which worked well enough if I kick-stepped into the trail and angled my feet sideways. 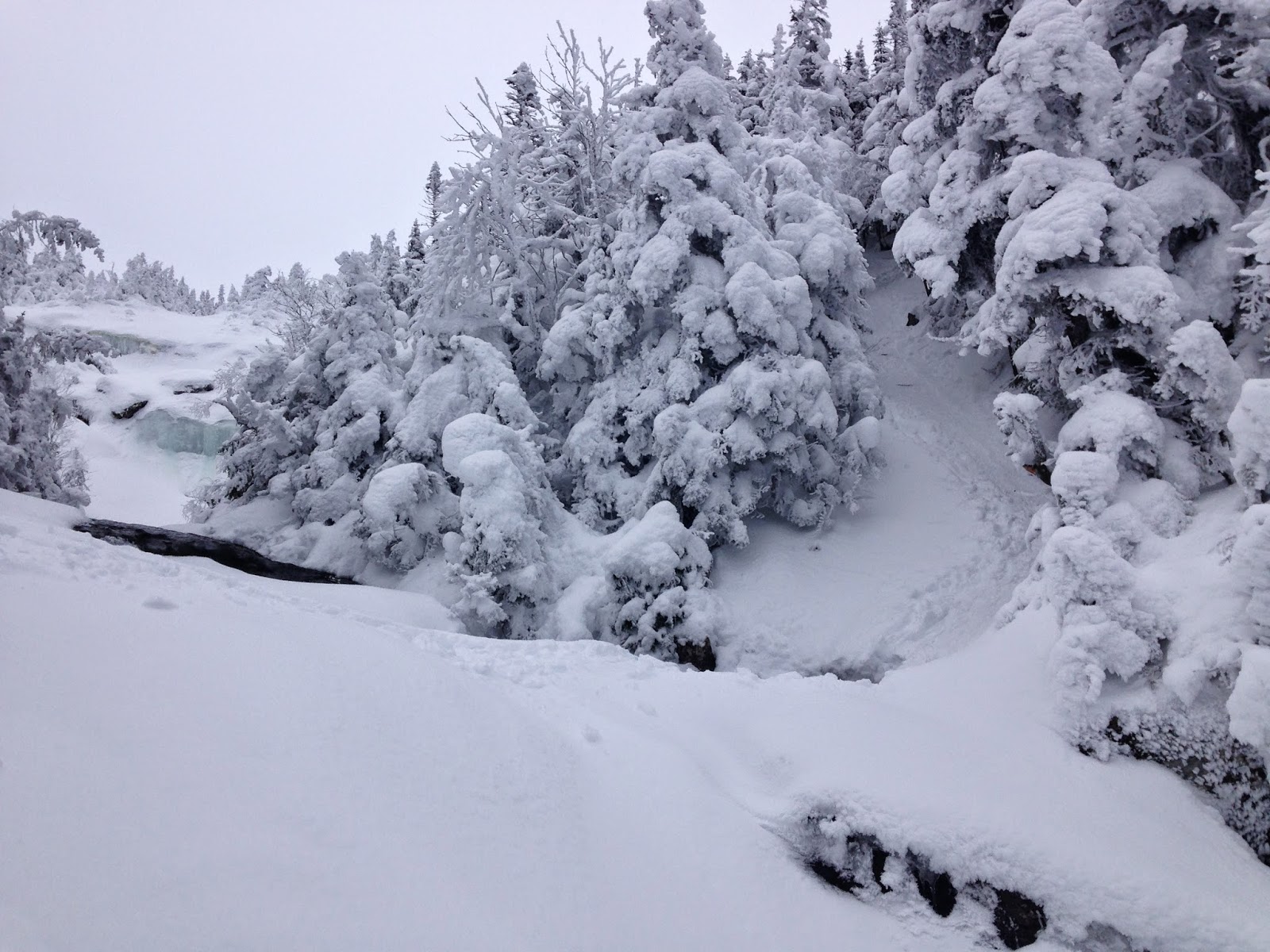 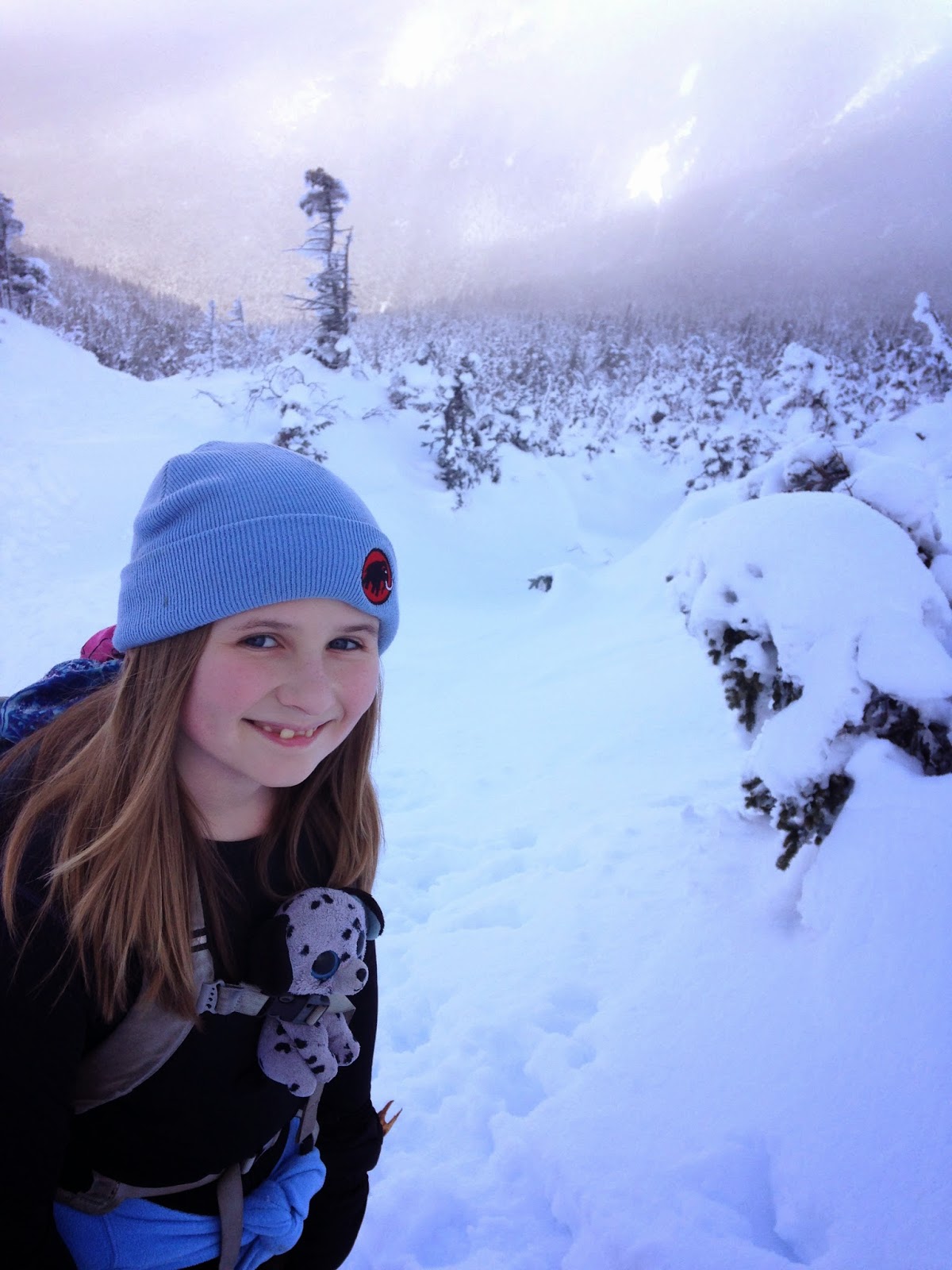 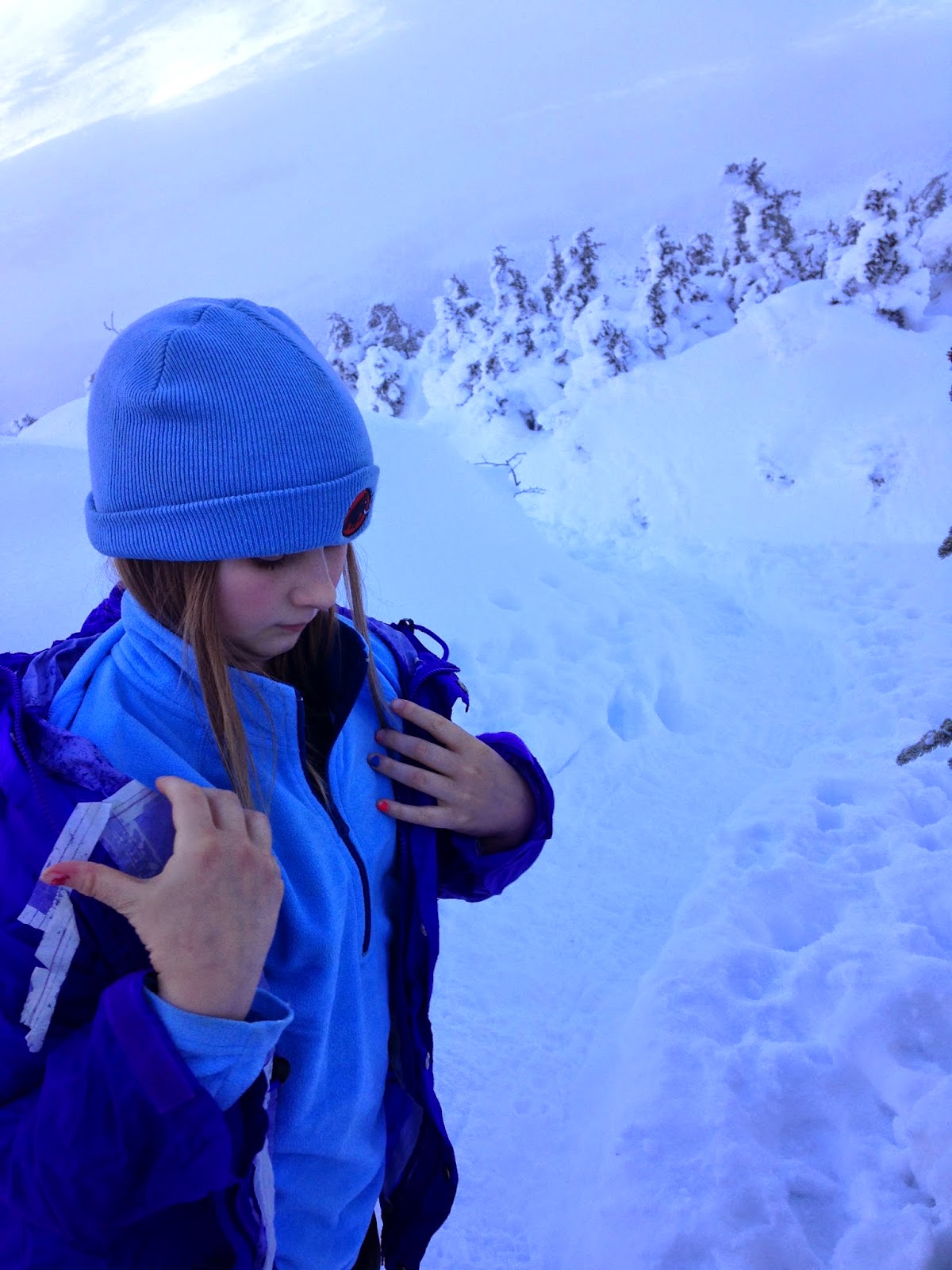 The main entrance to the Lakes of the Clouds hut, which is closed during the winter, is underneath all that snow.  The girls happily climbed to the roof and admired more view of Fog. 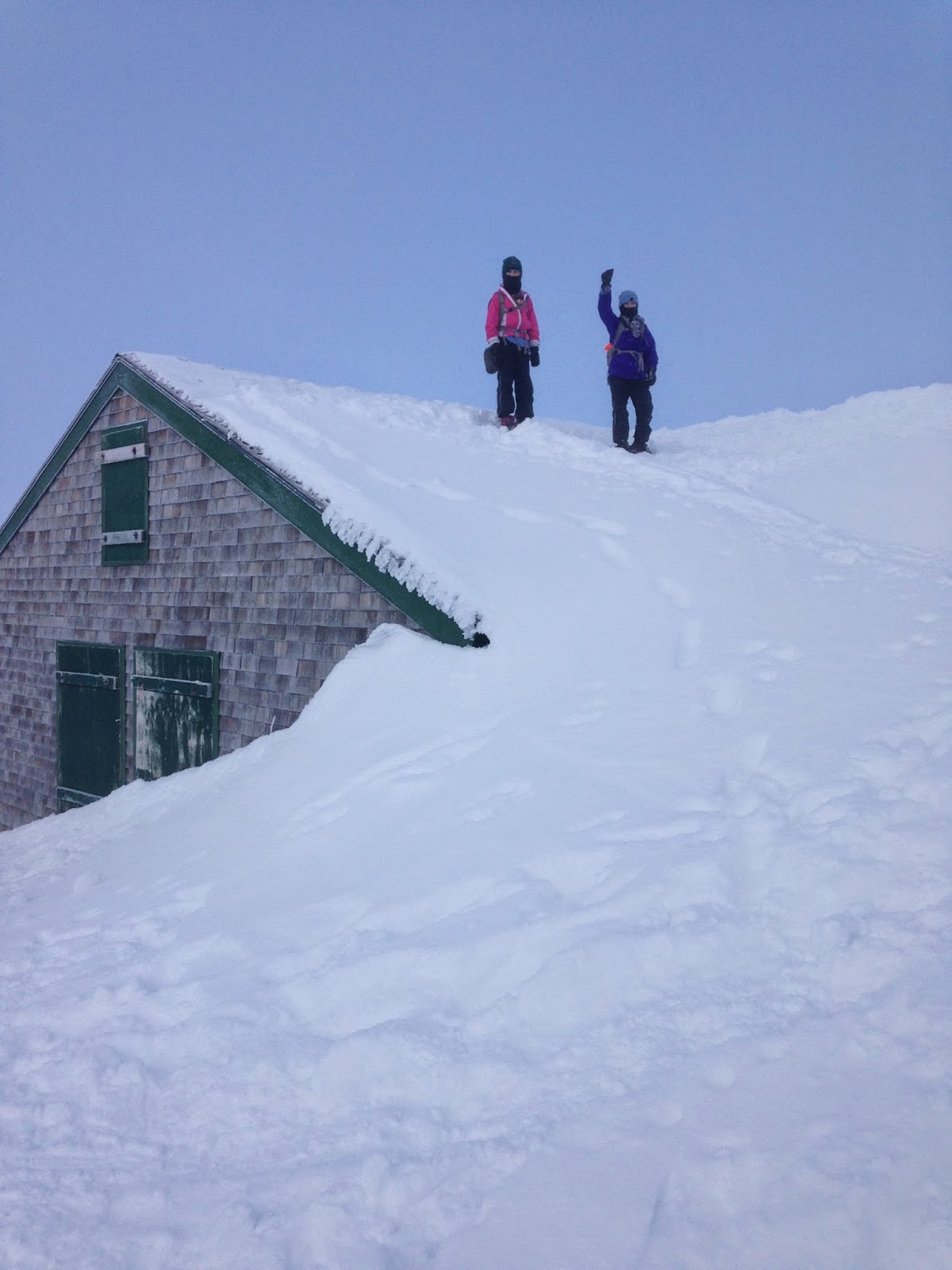 The way to Mt. Monroe from the hut...I am familiar with this trail, and with the mountain...otherwise, I would have been nervous.  We checked our compass frequently, just to be extra safe. 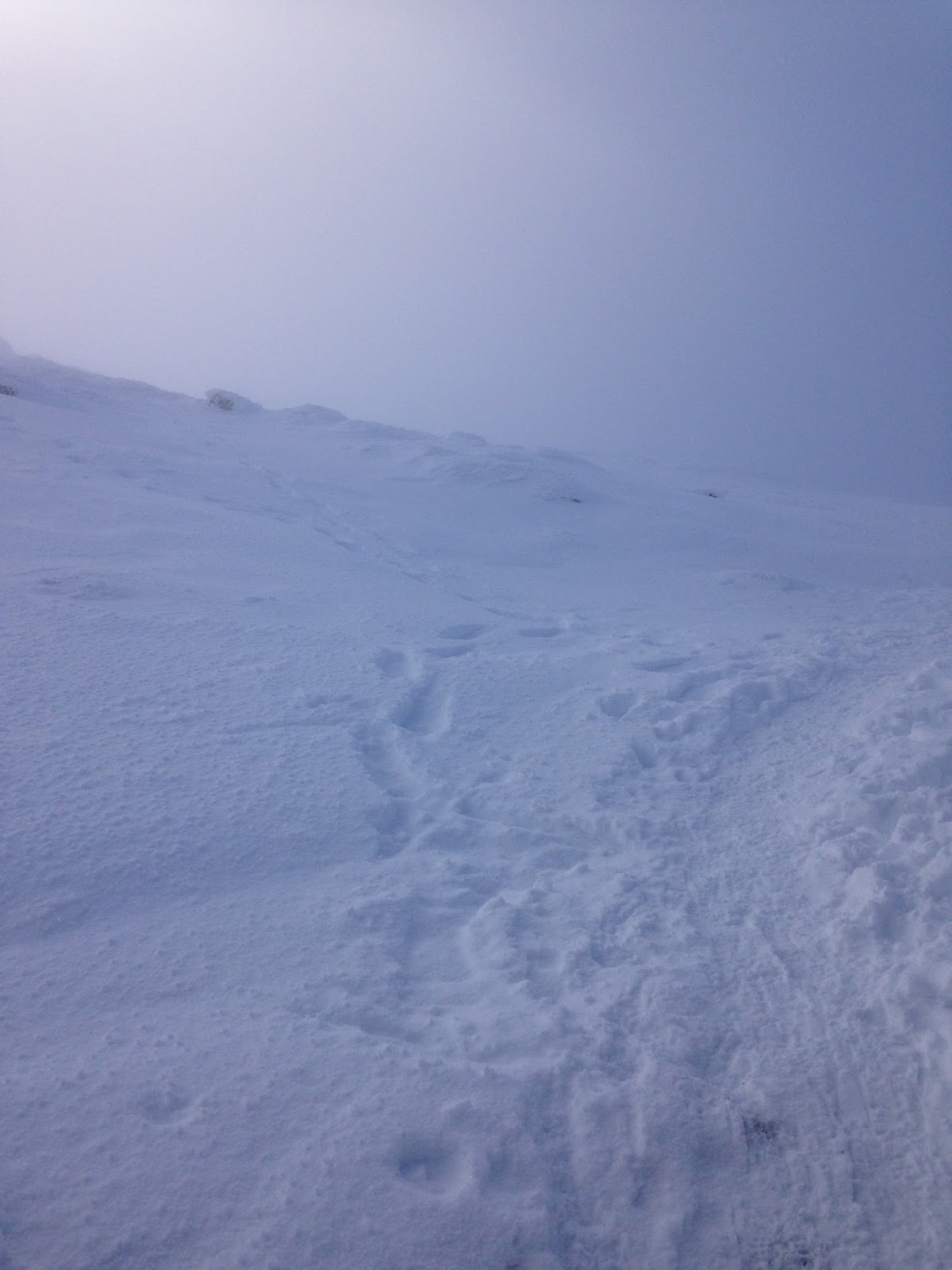 The half mile went quickly...the steep bits up the summit cone were snowy, not icy, so traction was never an issue.  We sat on the summit in the midst of Cloud. 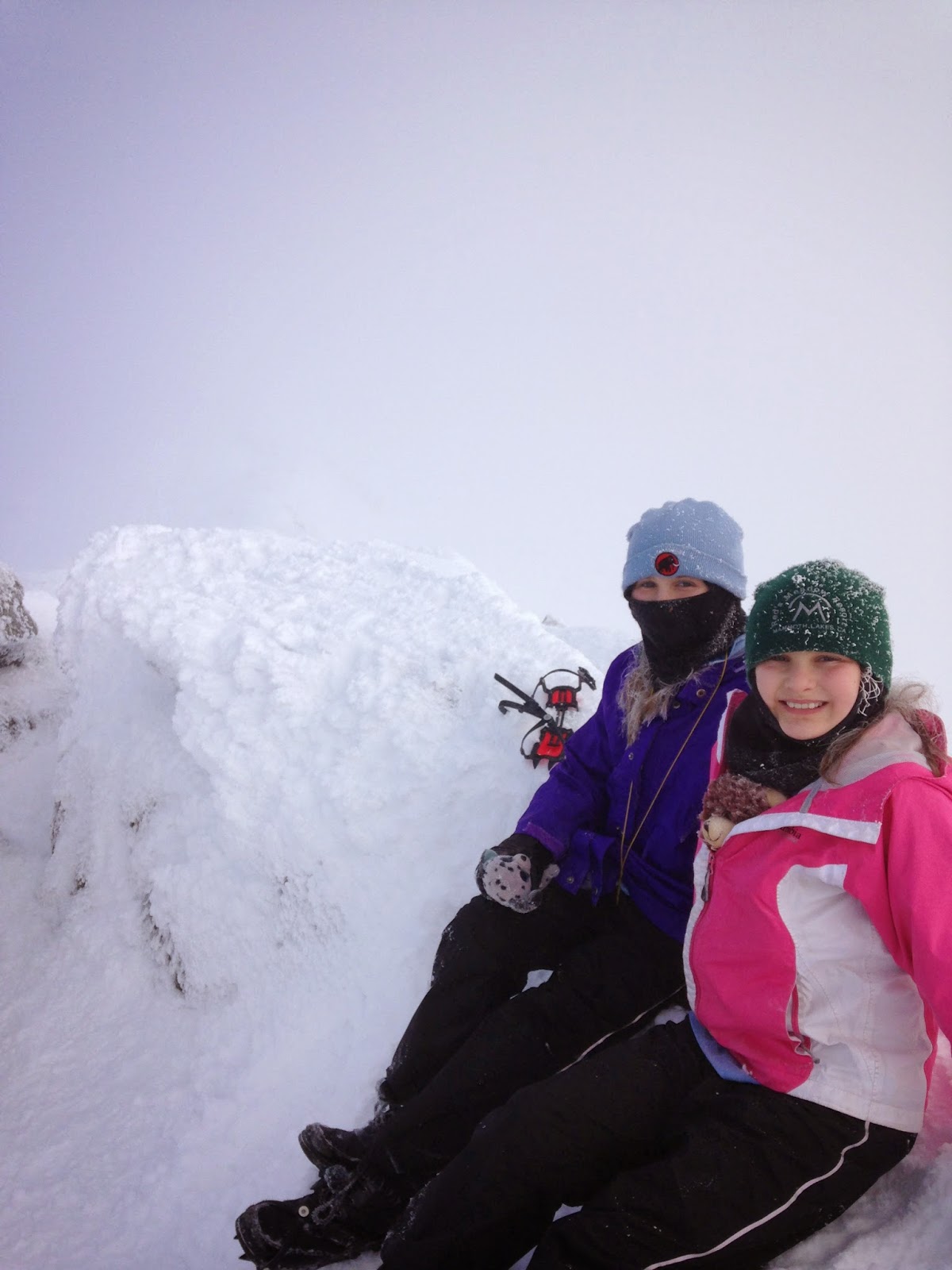 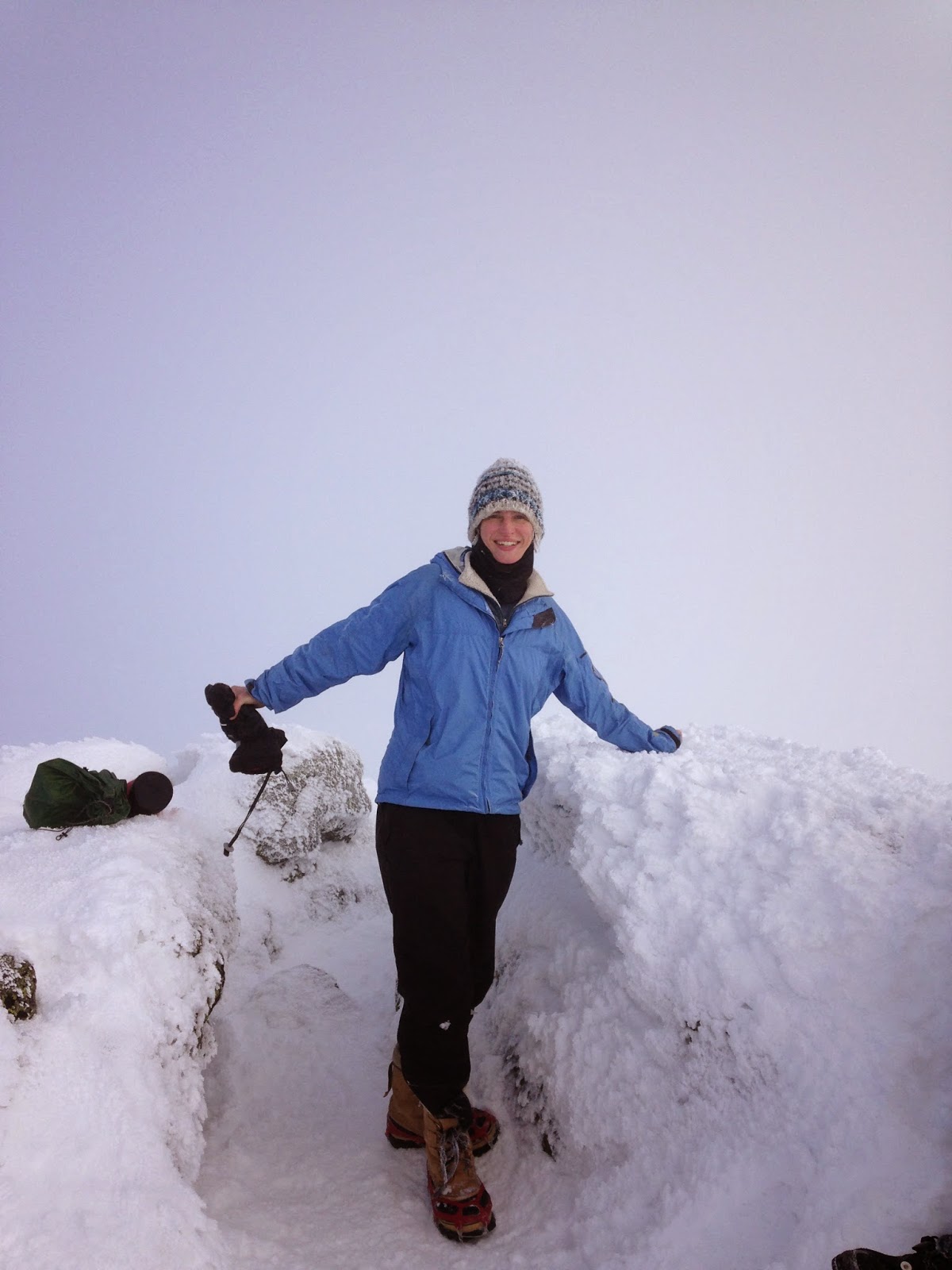 Our Desserts on the 48 tradition continued with Mallomars on Monroe. 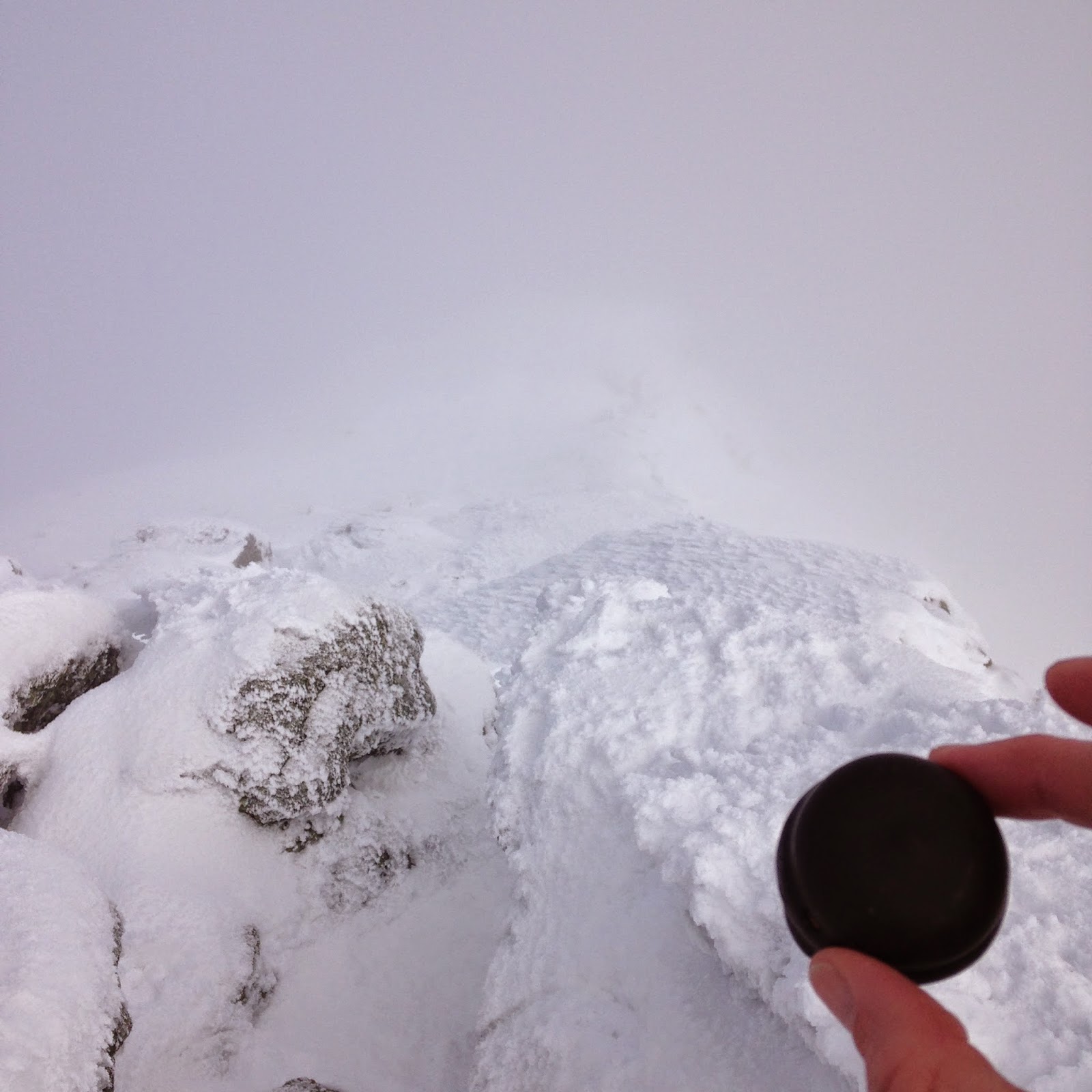 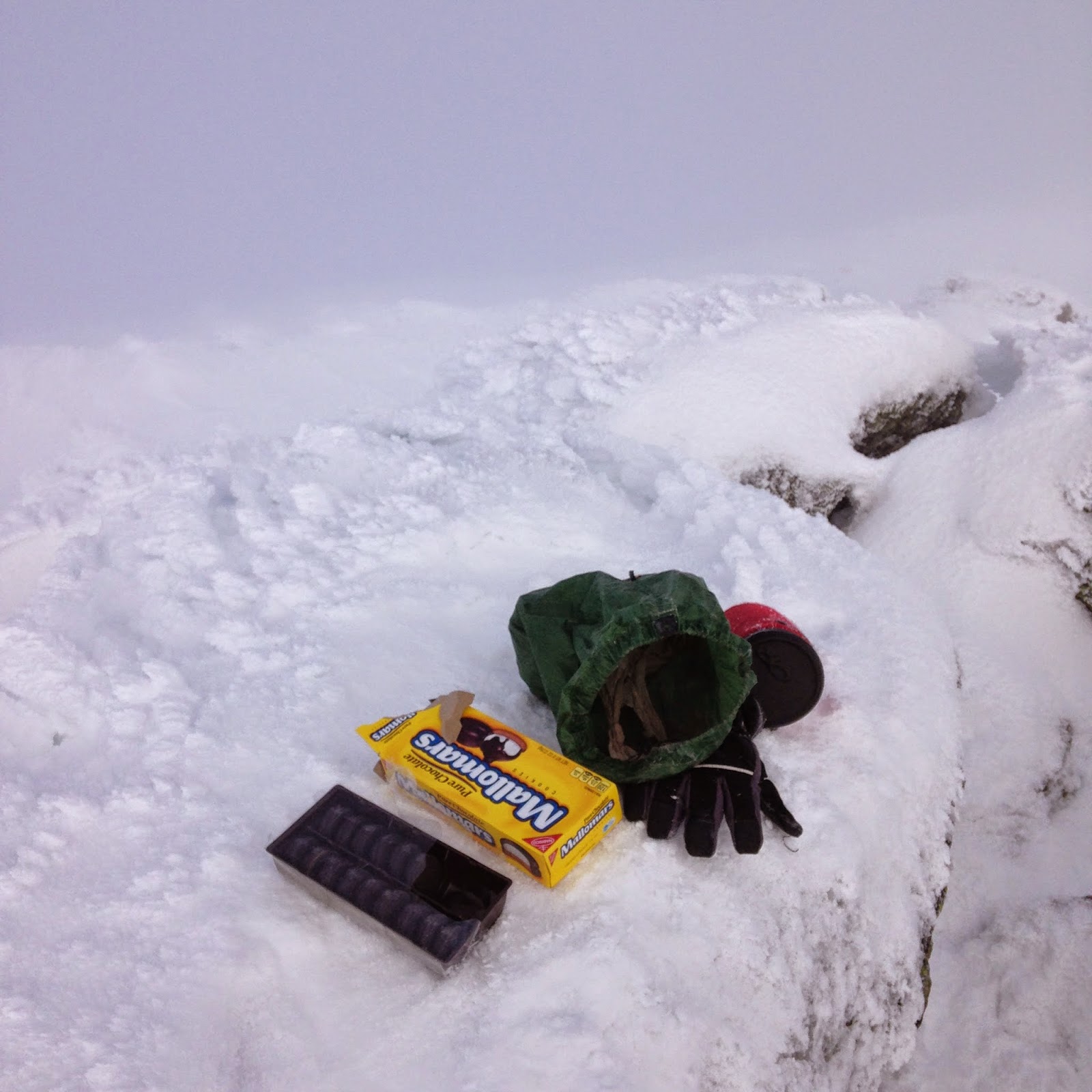 We didn't linger for long.  The temps weren't bad and the wind chills weren't unbearable...but all this White made me nervous, and I wouldn't feel 100% fine until we were back at the hut.

In between the real summit and the false one, I took a photo of the girls and their snow-hair. 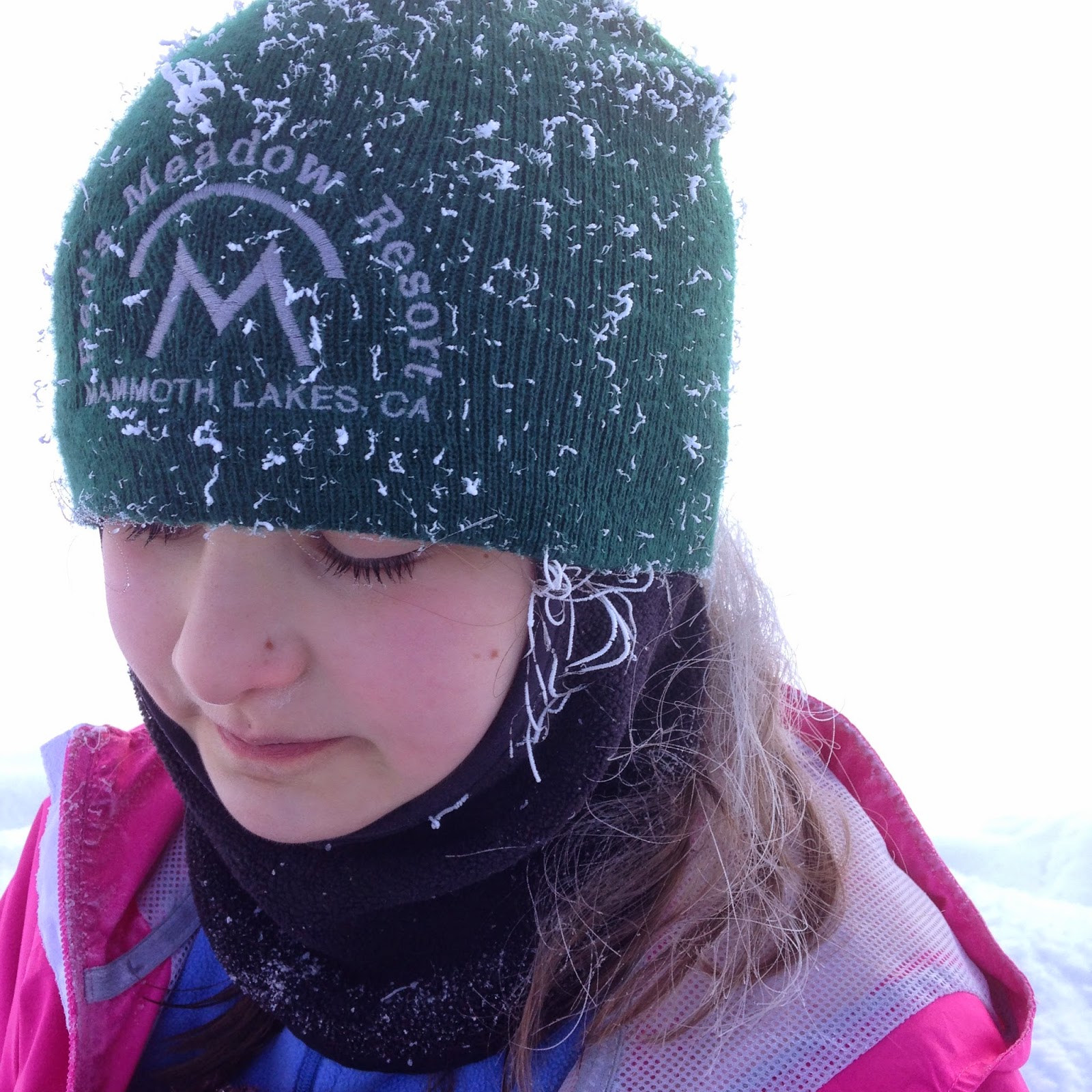 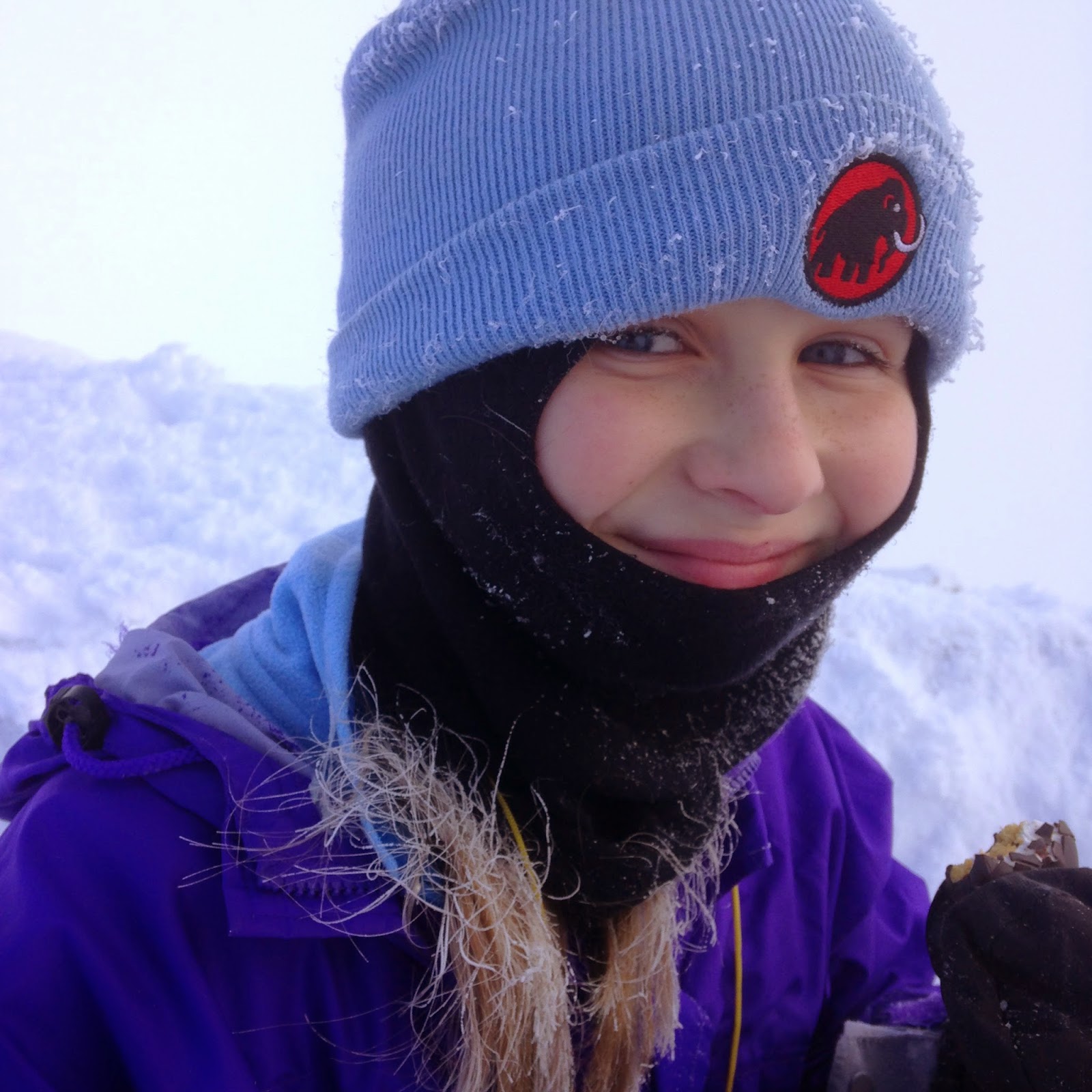 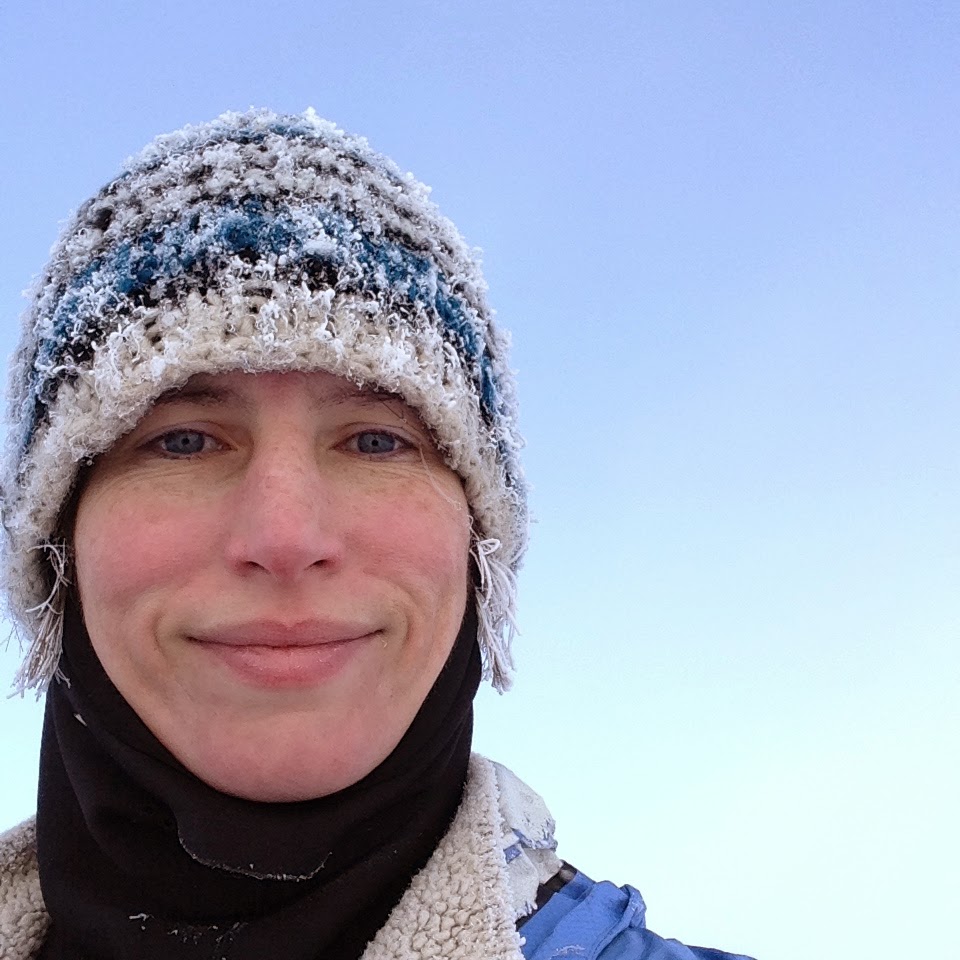 Just before descending the summit cone, the sky cleared just a smidge and we could see the top of Jefferson in the distance.  We seemed to be right at the edge of what the folks on Mt. Washington would see as an undercast.  We were just below the top of cloud layer, so we saw mostly fog/cloud...with just a hint of view every now and then, 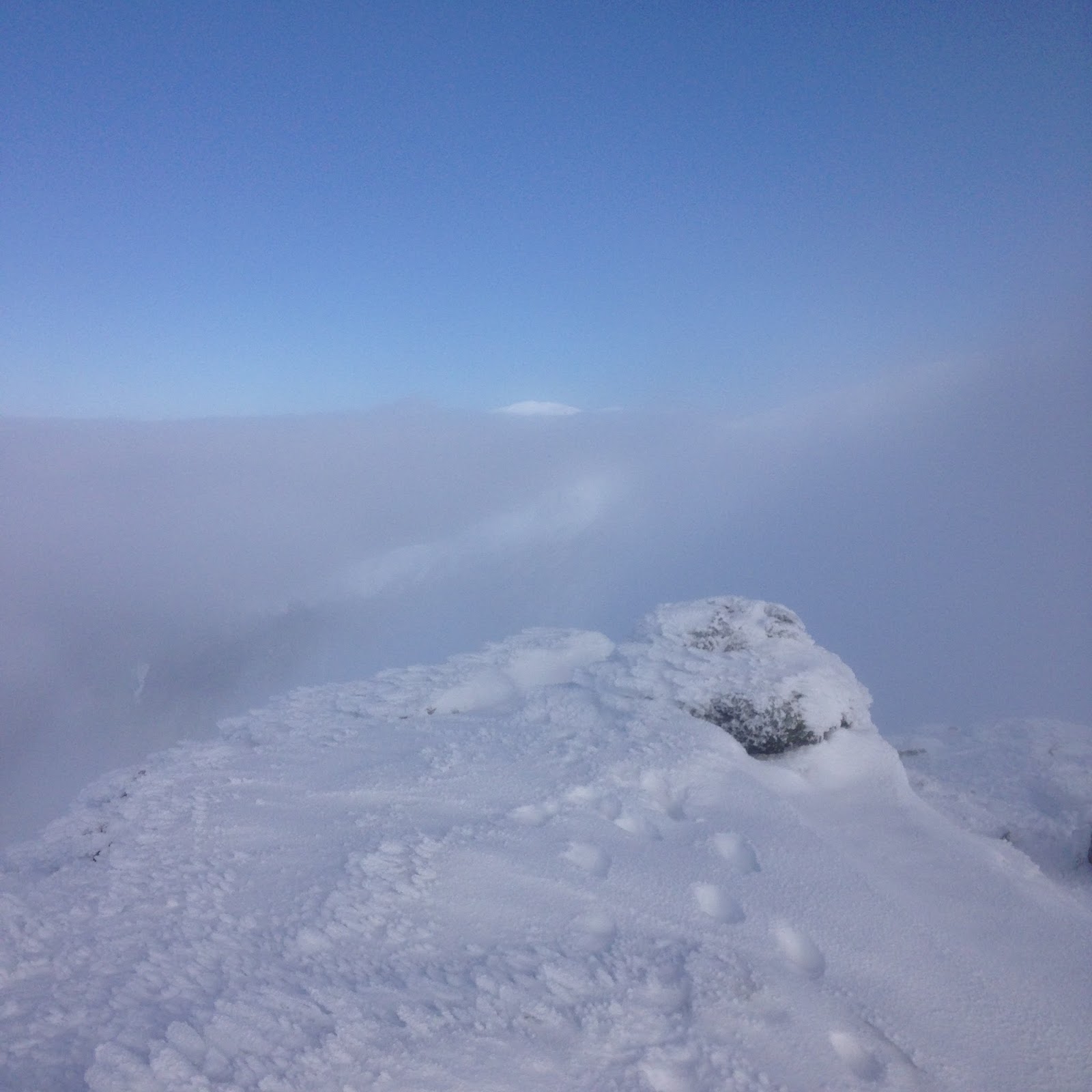 We stood and watched as the flank of Mt. Washington appeared..then disappeared... 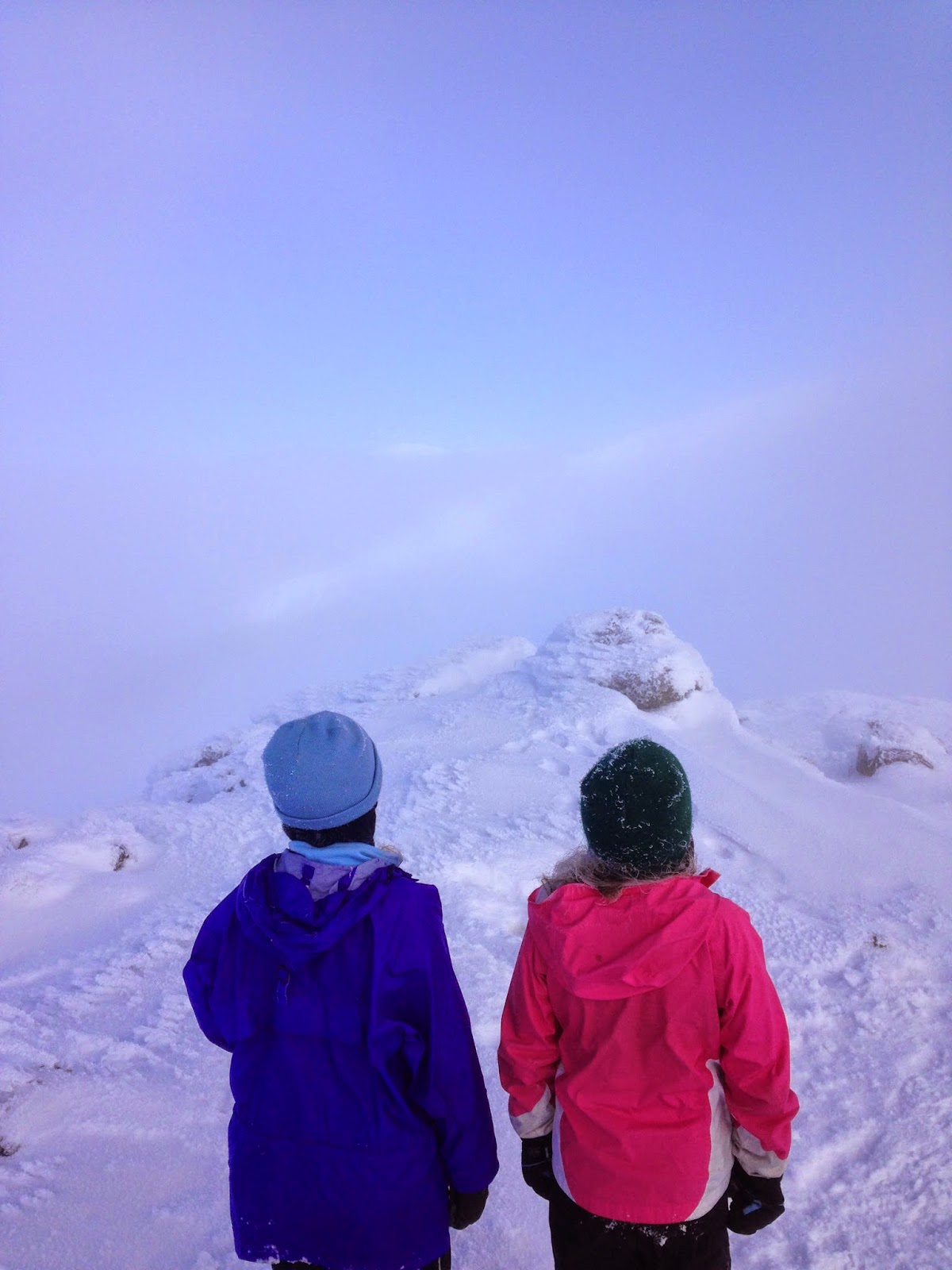 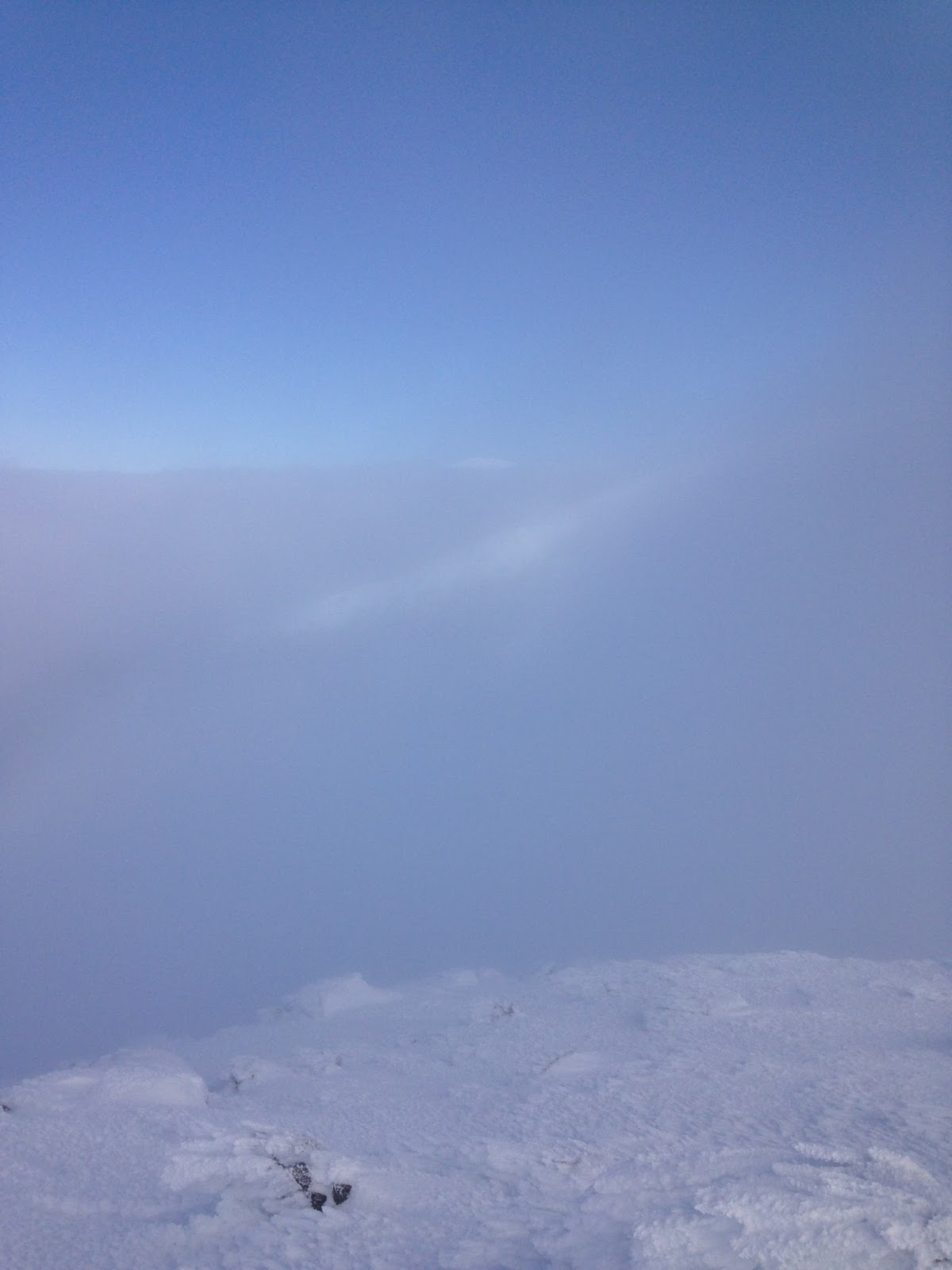 The show was quickly over.  Cloud returned, so we descended. 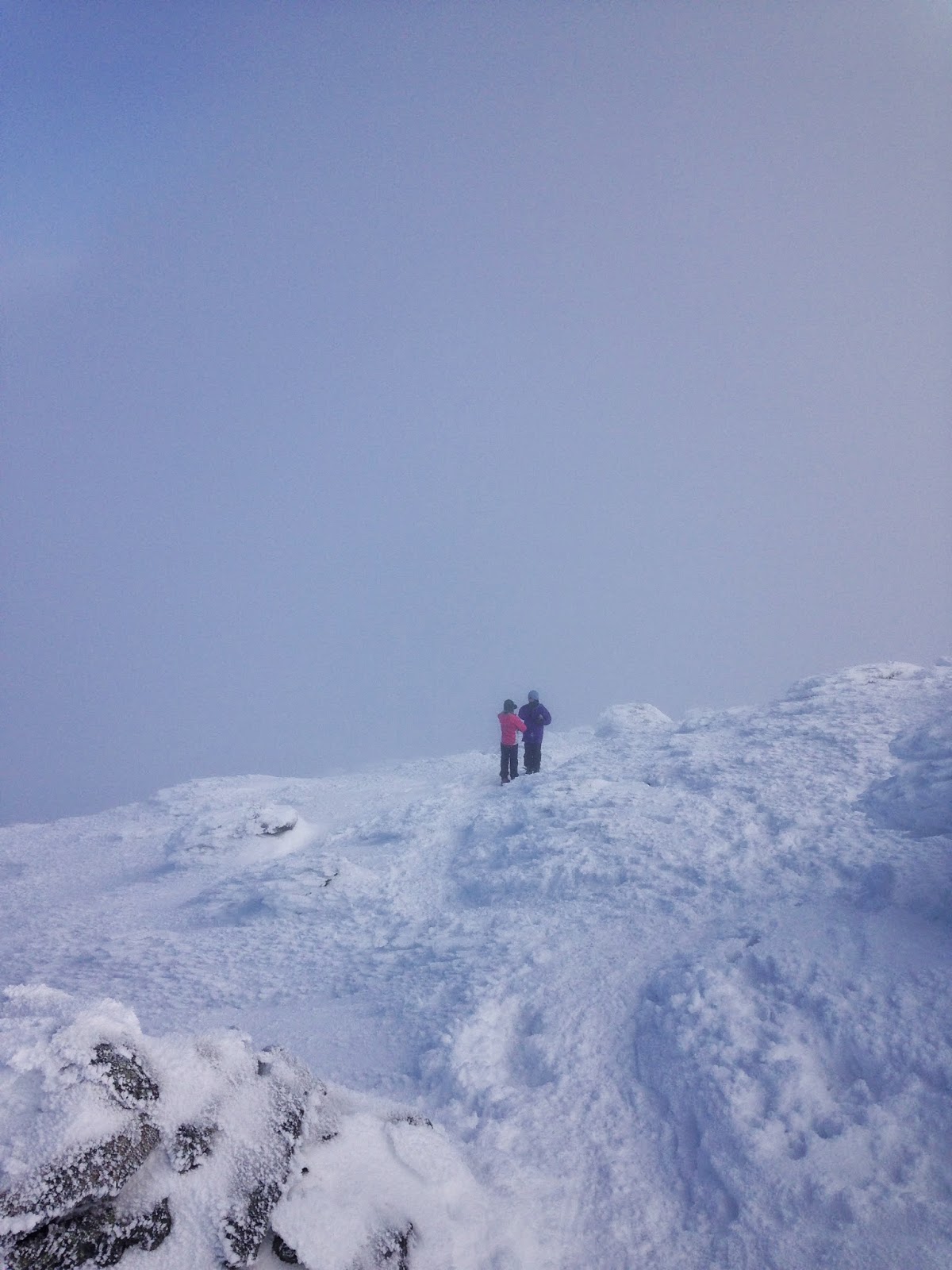 The icy trail sign at the base of Monroe's summit cone... 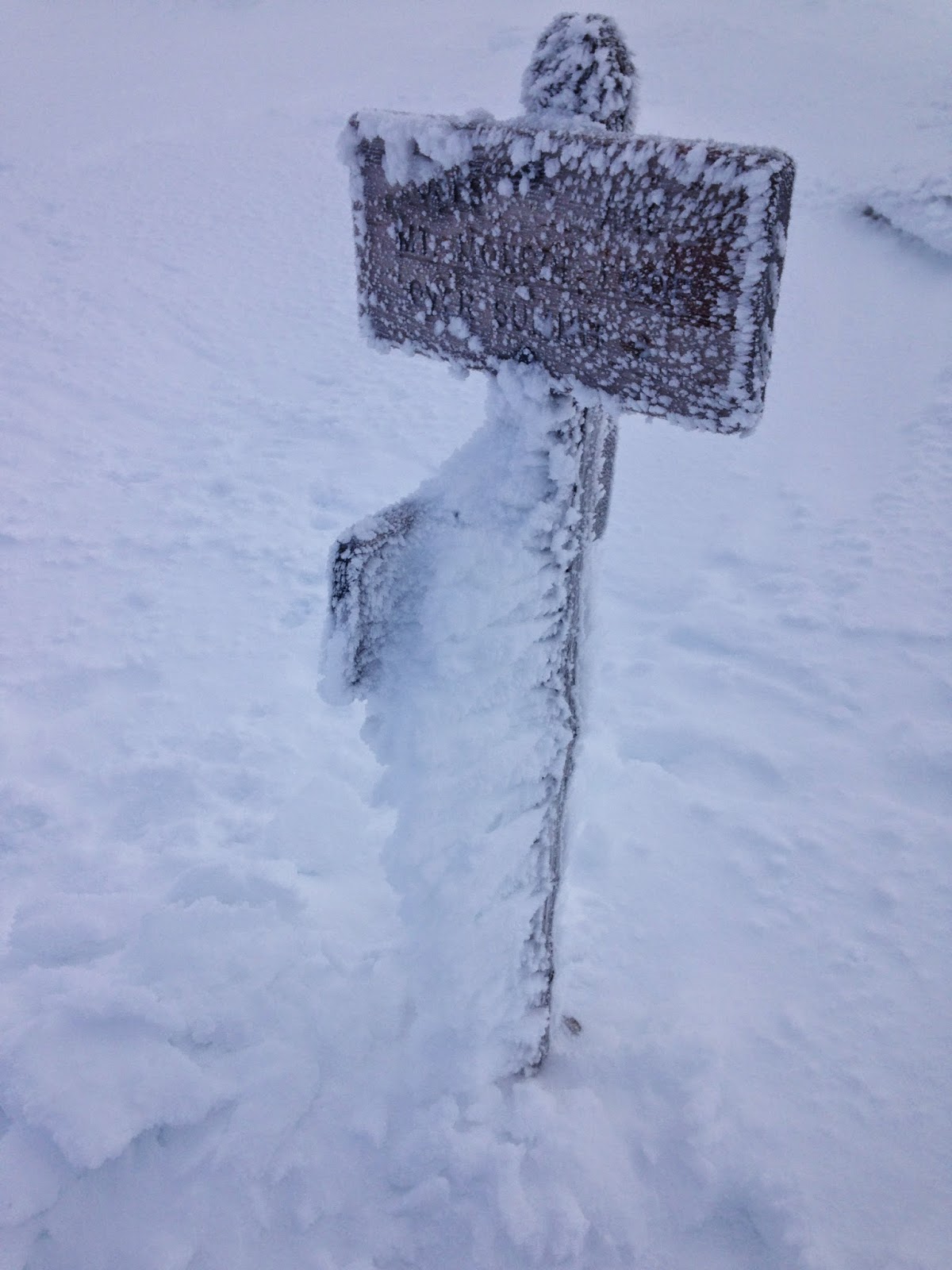 Our view from the sign toward the hut.  Like I said, I was glad we knew the trail and the terrain.  We also knew which direction we should be heading...and the tracks from other hikers didn't hurt. 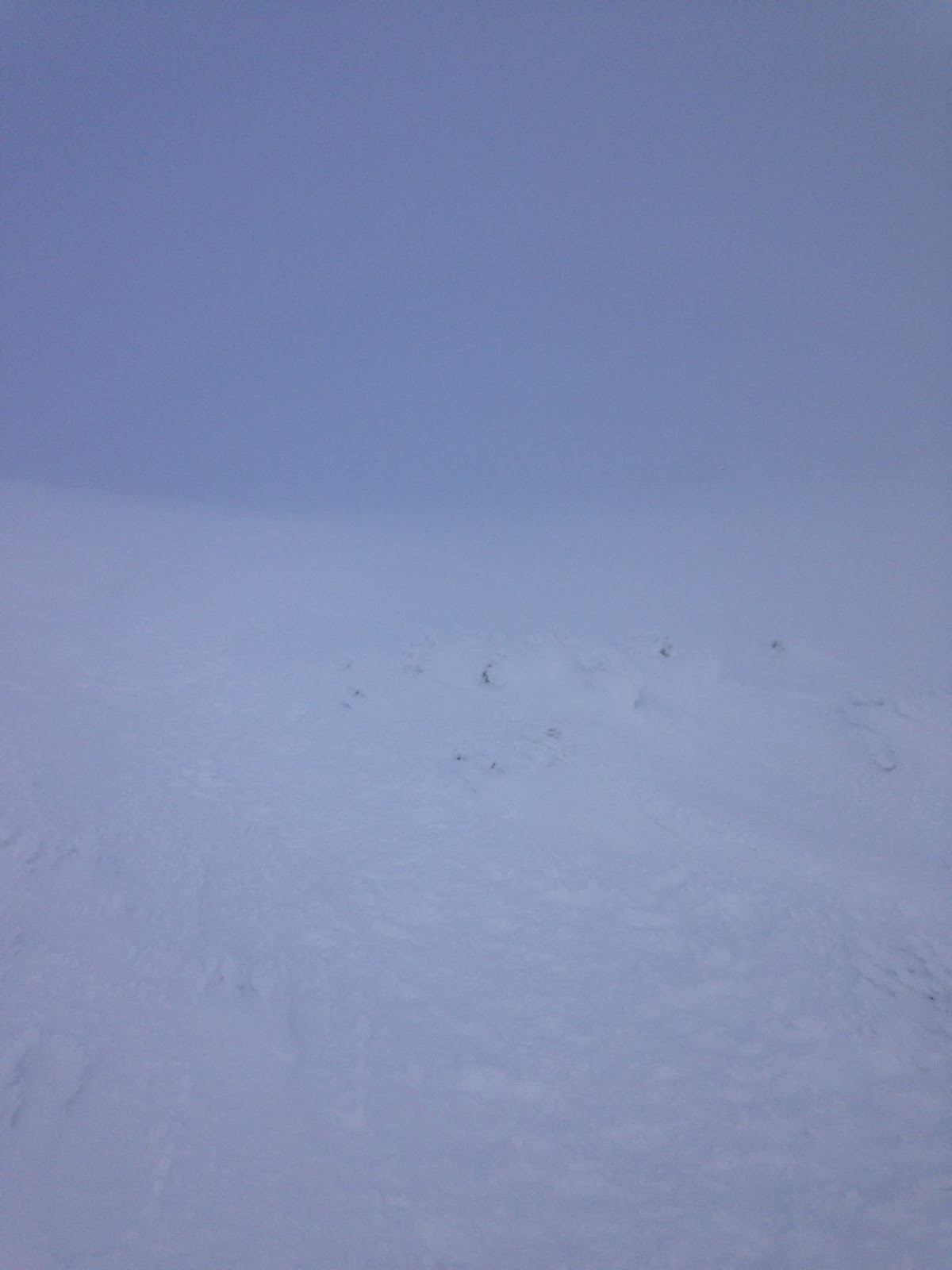 We met a fellow named Justin as we returned to the hut.  He was on his way toward Monroe -- he was a nice guy and it was a pleasure speaking with him.

Once at the hut, we prepared to gleefully butt-slide down much of Ammonoosuc.  We secured everything inside our packs and took a few more gulps of water.  Just before we began the descent, we met two young men with accents (German?) who were heading toward Washington.  We exchanged pleasantries, then we went on our way.

We walked down most of the above-treeline bits of Ammo...didn't want anyone to accidentally slide off into the ravine.  Just before entering the trees, we met Emerel, a fellow who posts on New England Trail Conditions.  We spoke with him for five minutes or so.  Nice fellow -- I'd love to share a hike with him sometime.  He too was headed toward Washington (and then Monroe).  We eventually parted ways -- I hope he had a fine time of it up there.

The descent below treeline was quick...we walked as much as we could and butt-slid down the extremely steep parts...which, if you've ever hiked Ammo, is most of the upper mile of the trail.  For this reason alone, I recommend all who hike Ammo bring crampons.  Lots of people butt-slide down this trail...it's part of the fun of winter hiking...so be prepared and bring the serious traction for your ascent.

The girls chased each other down most of the lower mile (after Gem Pool).  They paused at the trailhead long enough for me to get this photo... 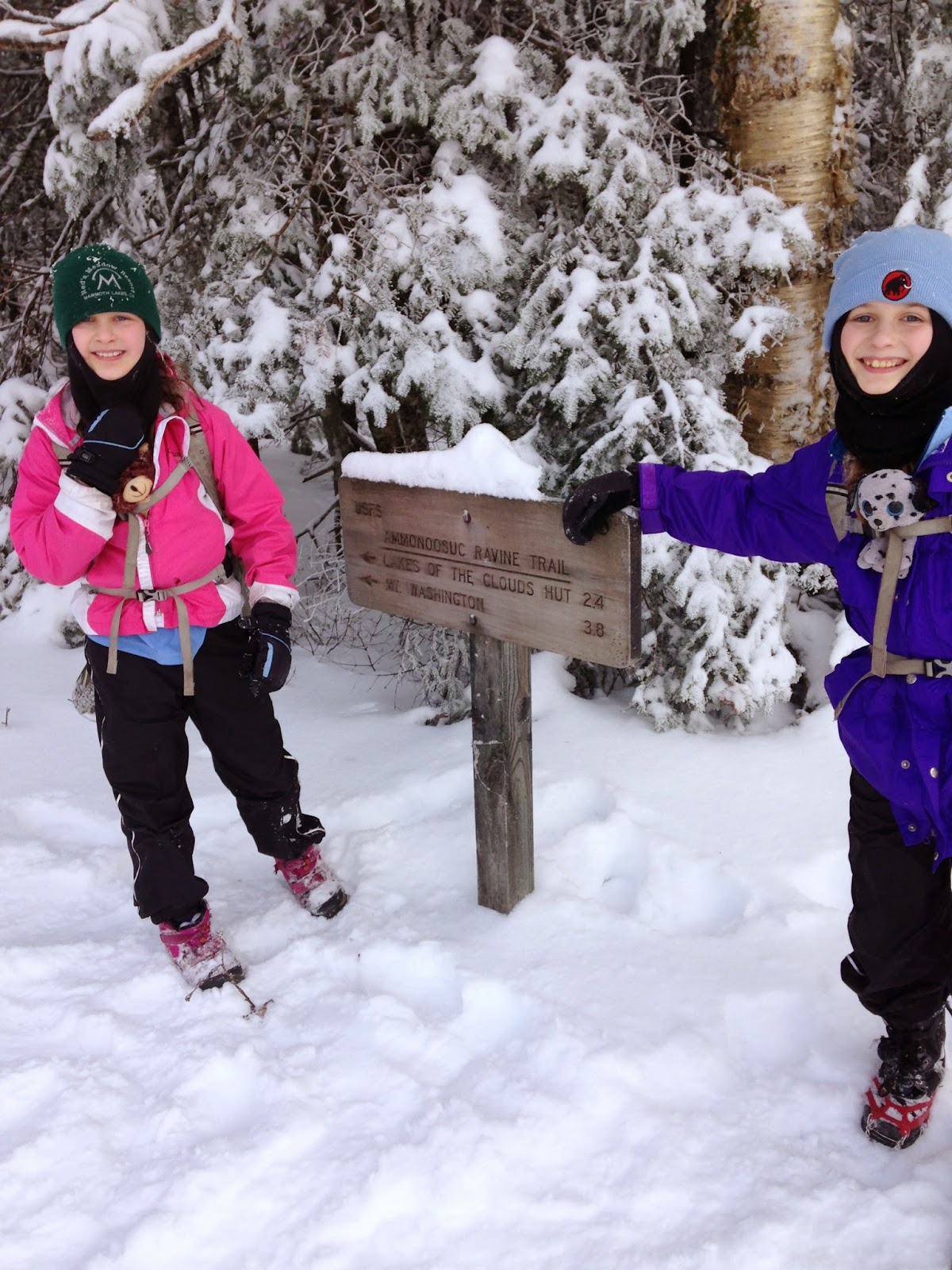 ...then they chased and playfully shoved each other all the way back to the car.  I think their goal was to fall into the snow as often as possible.

We'll likely get out again between Christmas and New Year's.  Have a wonderful holiday, everyone!
Posted by Patricia Ellis Herr, Alexandra Herr, and Sage Herr at 12:22 AM No comments:

Hope everyone is enjoying the winter weather!  My foot is finally feeling more or less back to normal.  We'll return to the trails next week, after Alex and Sage finish their midterm exams (we homeschool, but each girl takes accredited classes through various online and in-person institutions).  We'll probably hike twice during the Christmas holidays, then the girls will concentrate on skiing for a month or so.  In mid-February, assuming I remain uninjured, we'll get back to hiking once a week.

Many have asked if we're thru-hiking anything next year.  As of now, we plan to hike all the trails on our Terrifying 25 list, then head to Idaho to take on highpoint #45, Borah Peak.  We also have travel plans for the summer which are not hiking related.  We therefore probably won't be able to thru-hike a long-distance trail during 2015...there won't be enough time to fit everything in...though we will continue our fundraising-for-charities tradition using the Terrifying 25.  Stay tuned for more details.

I'll be back with a trip report next week.  Stay warm, folks!


Posted by Patricia Ellis Herr, Alexandra Herr, and Sage Herr at 7:27 AM No comments: