At long last, the final winter 4K hike!  As is so often the case in the Whites, the weather was odd.  Seven days earlier, Alex and I had ascended Mt. Washington in frigid temps and subzero windchills.  For Flume, we got summit temps in the 40s and valley temps in the 60s.  There is no such thing as predictable White Mountain weather.

Mike, a great fellow we met the previous week outside Lakes of the Clouds Hut, joined us, as did Mirabela and Isidora.  Isidora is 8 years old and a fantastic hiker; we've shared trails with her before, once on Hale and once on the way to Jackson.  We were happy to see this father-daughter duo again. 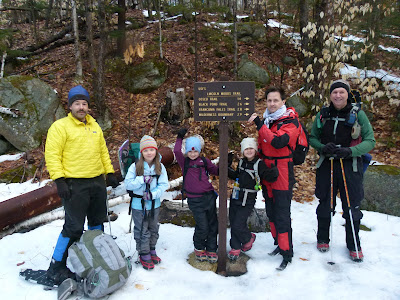 We made good time on the flat Lincoln Woods Trail...﻿ 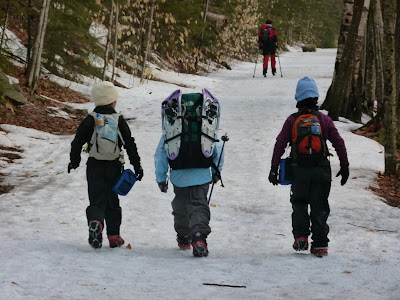 ...and soon arrived at the beginning of Osseo. 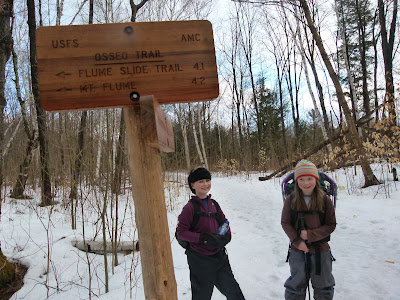 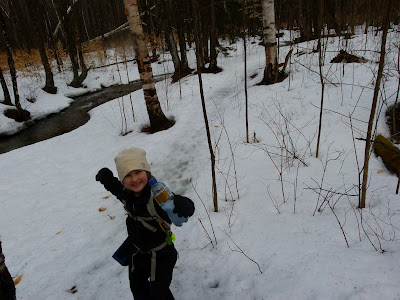 After a short break, we began the ascent. 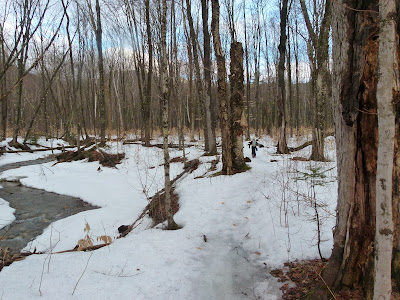 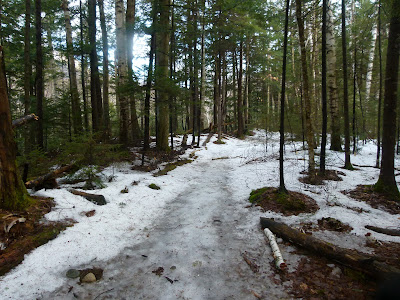 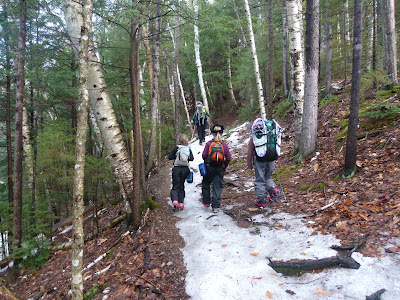 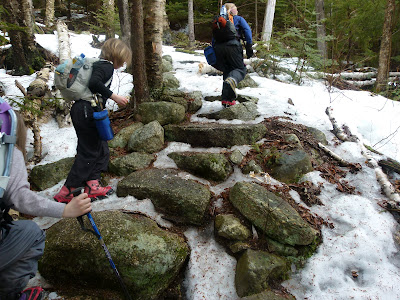 After the rock steps, the snow became a soft, knee-deep mess.  Alex and Sage did well enough without snowshoes when they kept to the middle of the forming monorail, but the adults postholed in spite of our 'shoes and Hugh had a just plain horrible time.  He was wearing his Cheetahs instead of his usual bionic limbs.  The Cheetahs are great for bare or packed trail, but they're horrible for deep, soft snow.  I gave him a pair of the girls' snowshoes and, with some cords and tape borrowed from Mike and Mirabela, he attached them to his prosthetics. 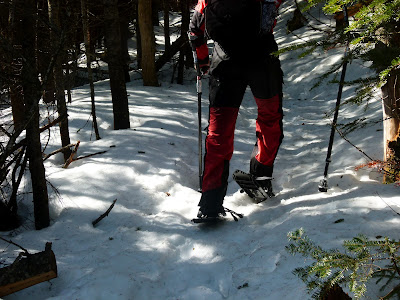 ﻿
Unfortunately, the snowshoes kept falling off. Hugh persevered, though his pace became extremely slow.  His Cheetahs are thin and narrow; imagine trying to walk on stilts through mushy, knee-deep snow, and you might get a sense of what he had to deal with.  He became worried about slowing us down and offered to turn back once he got to the ladders, but I knew how badly he wanted to be at the summit for Alex's finish, so I encouraged him to continue.

The ladders were covered with sinking snow; grip wasn't a problem. 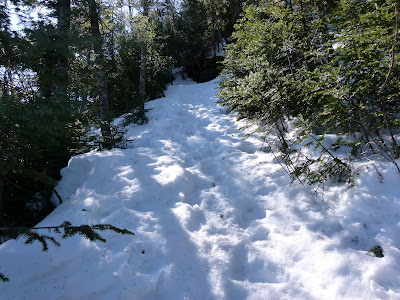 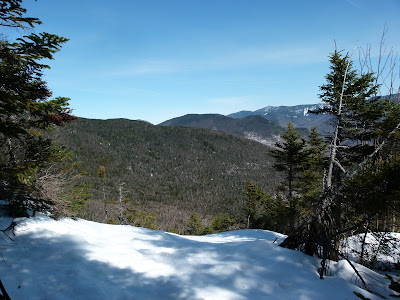 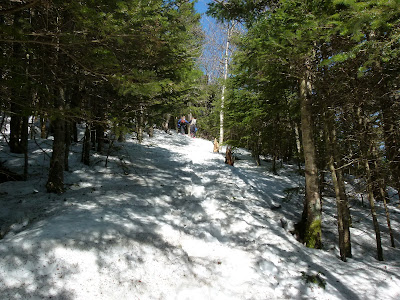 We reached the upper, flatter portion of the trail and, again, Hugh had problems.  The snow was soft and deep, and it was a real struggle for him to get through it.  Our pace slowed tremendously; I told Mike, Mirabela, and Isidora to go ahead and wait for us on the summit.  Hugh was tiring quickly and he began to worry he wouldn't make it to the top.  He's a strong fellow, but it's not easy to hike up a mountain through miles of deep snow, especially if you don't have legs.  Also, he recently had surgery on his neck.  Also also, he'd just spent a good portion of the previous day climbing for a work-related project.  Put all that together and you get one tired guy.  However, I knew he'd forever regret it if he wasn't there for Alex's finish, so I told him to take his time and keep on truckin'.  The day was warm, I had what we needed for a night out if it came to it, and the girls were going strong.  We'd be okay.
We made it to the intersection with the Flume Slide Trail... 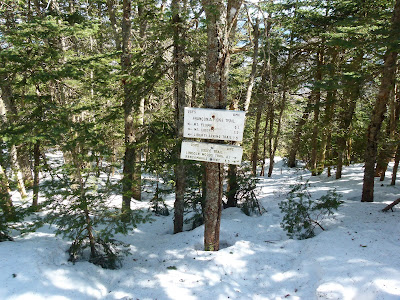 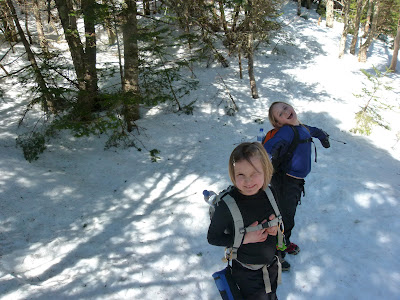 ...and continued to treeline. 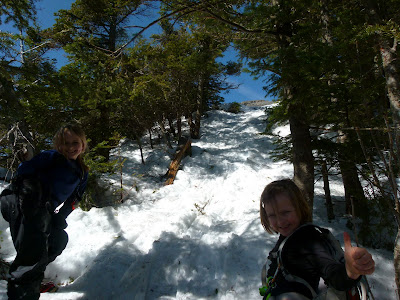 Mike, Mirabela, and Isidora had been waiting on the rocks just above the trees.  When they heard us coming, they continued toward the summit. 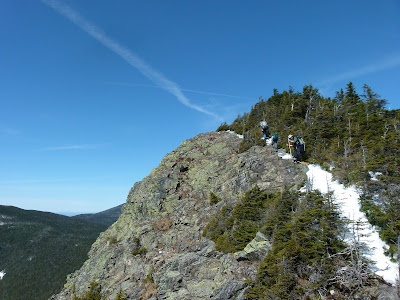 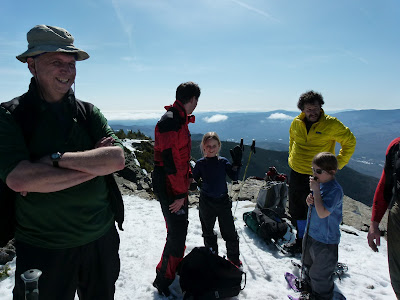 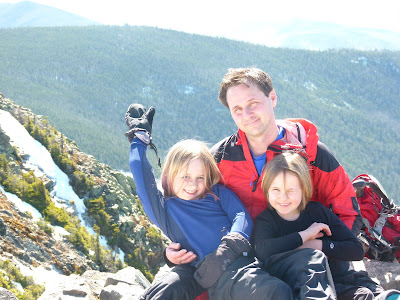 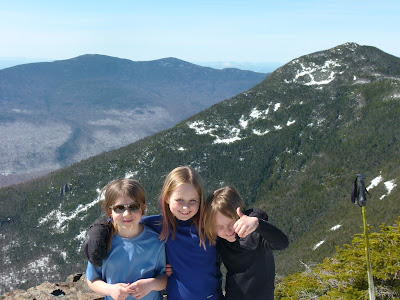 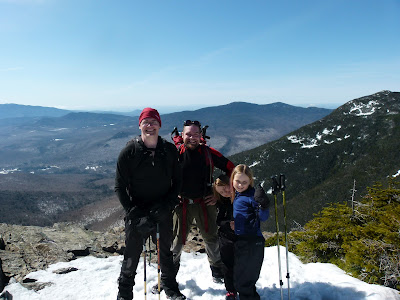 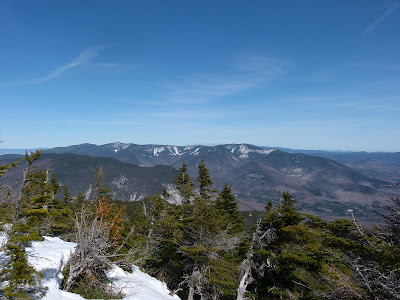 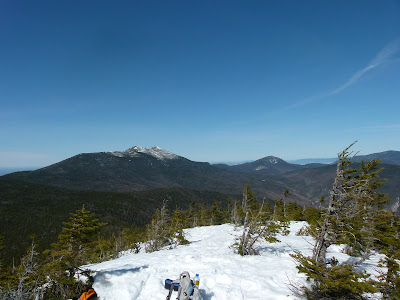 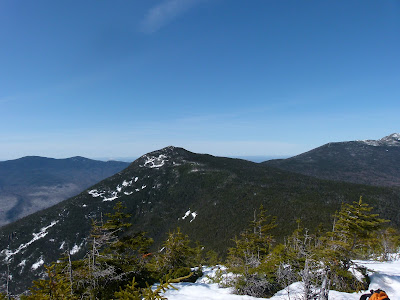 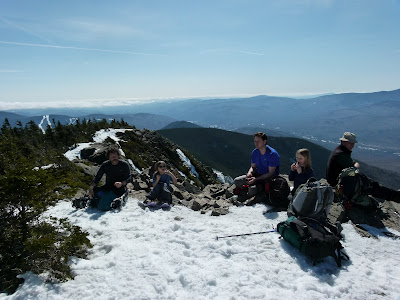 It was lovely and warm above treeline.  We sat in the sunlight, conversed, shared food, and admired the views.  Eventually, we picked ourselves up and made our way down.
Hugh's progress on the flat bits between the Flume Slide Trail and the Osseo ladders was, again, slow -- the snow was now even more mushy and he had to move carefully so as not to constantly sink.  I told Mike, Mirabella, and Isidora that we didn't expect them to hike out with us, that it would be fine if they went ahead.  They graciously insisted on staying with us, though.  I was grateful to them for their company and support.
Life became much easier once we got to the ladders.  From that point on, Hugh was able to butt-slide/sled until we ran out of snow.  Once we got to the bare/spiny sections of trail, walking no longer became an issue.
We made it back to the trailhead just as the sun went down.  Here's my brilliant "finish photo" -- one of these years, I'll learn how to use my flash... 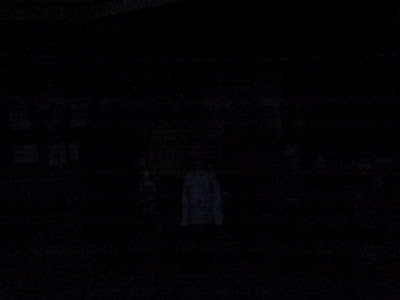 Mirabela graciously stepped in and took the following...﻿ 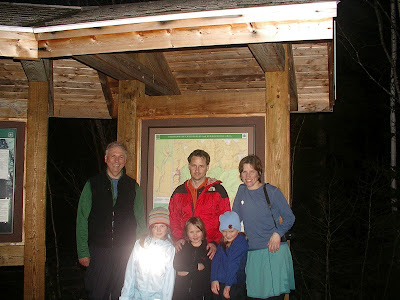 Many congrats to all three young ladies for an excellent hike.  Many, many thanks to Mike and Mirabela for their good company and help on the trail.

It's done!  At least, for Alex.  Sage now says she wants to do the winter 4Ks...if her sentiment doesn't change, then I guess I'll be doing this all over again next year.  :)
Posted by Patricia Ellis Herr, Alexandra Herr, and Sage Herr at 9:36 PM

simply amazing. i love that you all went together. good friends/good family/good hiking are where it's at. pace schmace! you did it. awesome!

I agree with unstrung - amazing! I'm just finishing your book "UP" this evening and it has been a really good read (I won an ARC in a contest). I don't typically read non-fiction but, reading your story, I could almost feel like I was with you on those long hikes. Congrats to you all!

Unstrung, thanks for your message! It was a good day. :)

Susan, thanks for your words of congratulations and support. I'm glad you're enjoying UP! If you have the time, please consider writing a review on Amazon and/or Goodreads when you're finished. Those reviews help a lot! -- Much obliged, Trish

Great report and pics Trish! No wonder you guys, especially Hugh, were tired! Way to hang in there. Love the picture of the three girls on LW trail. Congratulations again. See you on the third!

Thanks, Pam. It was great seeing you after the hike. Congrats once again on your own finish!

I'm glad you can come to the Harvard Coop signing on April 3; we look forward to seeing you again.