Countdown, the Harvard Coop, and Dirt!!

COUNTDOWN -- EIGHT more days until Up: A Mother and Daughter's Peakbagging Adventure is published!

If you're in the Boston area, please join us on April 3 at 7pm at the Harvard Coop in Harvard Square for our first book event!

If you didn't see CNN's feature on Hugh yesterday, the folks at "The Next List" tell me an online link will be available shortly.  It was a great show!  We are thrilled with how it turned out.


***
The Monday Muse -- Hooray for Dirt!!
This morning, I did an interview with a popular Manchester newspaper (I'll post the link to the article when it's published).  I was asked, among other things, if I had any advice for parents who want their kids to pursue outdoor adventures.

My immediate answer was, "Let them get dirty!"

Seriously.  Let them get dirty.  Get used to packing a change of clothes -- shoes, even -- and allow your kids to wallow at will.  Bring wipes, if it makes you feel better, so you can clean up your children before sticking them back in the car.

Dirt is good.  It's earth, it's the essence of life.  Without it, we wouldn't exist.  Dirt is educational.  In it, a kid can discover all sorts of things.  Pebbles, bits of grass, earthworms, dead bugs, old pennies -- a square foot of earth is a natural treasure chest.  You can build things with dirt.  Just add water and...voila!  Mud pies, mud castles, mud everything. Dirt and mud feel good in your hands.  Dirt is a wonderful thing.

I've known parents who didn't allow their kids to play in the dirt.  The reasons varied.  They didn't want clothes to get dirty, they were worried about disease, they wondered what the neighbors would think.  To all that, I say, "Nonsense."  To deny a kid her time in the dirt is to deny a kid an important part of her childhood.  Bring a change of clothes, don't take her to places where stray animals and unleashed dogs habitually roam (and pee), and stop caring what the neighbors think. 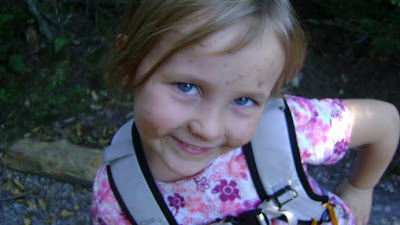 Cleanliness is overrated, folks.
Posted by Patricia Ellis Herr, Alexandra Herr, and Sage Herr at 11:00 AM

As we in the hiking community always say, it is not a hike unless there is mud or blood.

Hey, I think it was me who coined that expression. "It's not a real hike unless there's mud or blood." :)

Imitation is the sincerest form of flattery?

I was actually going to post some praise for this entry. Getting dirty is good for all of us, but especially for kids. It's so frustrating to see kids decked out in fancy clothes at the farm I volunteer at (and other places too) being constantly yelled at by their parents not to touch anything and not to get their shoes dirty. What's the point of coming to a farm if if you can't touch the animals and get a little messy in the process?