This week, we crossed off number 66, roasting chestnuts o'er an open fire.

The chestnuts, bought at our local grocery store: 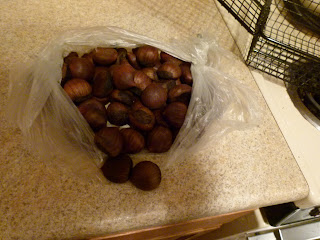 We carefully carved an X into each nut in the hopes of preventing mini explosions... 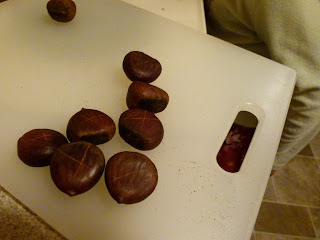 ...then we piled the nuts into a roaster and stuck them into the fireplace. 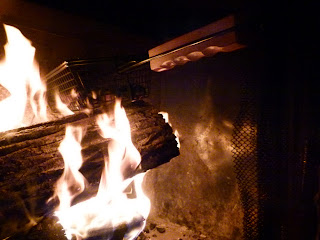 One isn't supposed to put the nuts directly into the flames, but I got tired of holding the roaster and succumbed to laziness.  Every 5 minutes, I'd lift the roaster and shake the nuts around a bit.  After 25 minutes, I took them out and poured them into a bowl to cool off. 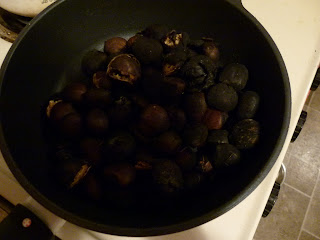 Some of the nuts had indeed popped and charred, but most of them survived.  We got to work peeling them as soon as they were cool enough to handle. 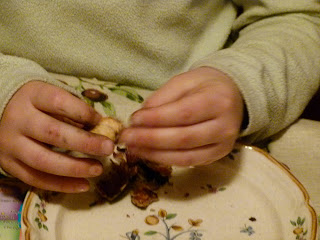 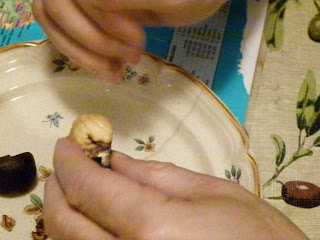 After peeling the nuts, we proceeded to eat them enthusiastically.  They were good!  Word to the wise, though -- chestnuts aren't very tasty cold, so eat them while they're warm.  Some folks put salt, sugar, or butter on them, but plain is good too (we like them right out of the shell, with nothing added).

Moving on to this week's progress on the 100 Best Kids and Family Movies List...we saw Matilda, The Muppet Movie (original version) and all three listed Harry Potter Movies.

Matilda -- we loved it.  The movie is faithful to the wonderfully dark and twisted book by Roald Dahl.  The main meanie of the story, Miss Trunchbull, is perfectly played by Pam Ferris (who, by the way, also plays Harry Potter's Aunt Marge in Harry Potter and the Prisoner of Azkaban).  Ferris' Trunchbull is big, loud, and downright nasty.  She's the perfect antagonist, guaranteed to make small children unfamiliar with the story cry.  A lot.  Doesn't get much worse than the Trunchbull.  If you haven't already read the book, and if your child is the super-sensitive type, then you might want to preview this before you let your youngest ones watch it.  Don't get me wrong, it's a great film (we give it three out of three thumbs) -- it's just not exactly light or fluffy. 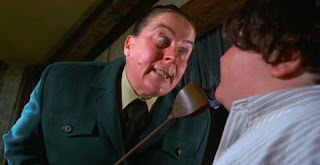 Pam Ferris as Miss Trunchbull
The Muppet Movie (1979)-- we loved this one too (another three out of three thumbs).  Small-town frog travels far to make it big in Hollywood, makes a lot of colorful friends along the way.  Great music, silly jokes, and a zillion 1970s movie stars.  Seriously, how can anyone NOT like the Muppets? 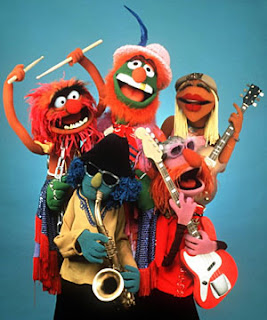 Dr. Teeth and the Electric Mayhem
Finally, we saw all three Harry Potter films on the 100 Best list: Harry Potter and the Prisoner of Azkaban, Harry Potter and the Goblet of Fire, and Harry Potter and the Deathly Hallows, Part Two.﻿
The girls and I have read all the Harry Potter books, therefore we've always enjoyed the movies.  That being said, I've no idea how anyone who isn't already familiar with the text can possibly understand what's going on in the films.  That's no one's fault; the movies can't include every single detail of the stories, bits and pieces of the book have to be left out or the films would each be eight hours long.  In any event, we agree that these three Harry Potter films are the best of the bunch, and we enjoyed them tremendously.
That's it for today.  I'll post a Friday Wrap late tomorrow evening, provided we get out of the woods before Saturday morning (we're hiking tomorrow...it'll be a long and difficult trek, so wish us well).
Posted by Patricia Ellis Herr, Alexandra Herr, and Sage Herr at 10:23 PM

What a perfect time of year to roast chestnuts. (I'm going to have the song in my head all day today now.) :) Happy New Year!

Happy New Year to you as well, Marcy! Wishing you and your family all the best.