The girls and I got up early and tagged Zealand for Trailwrights (and Desserts on the 48) this morning.  The girls had karate afterward, and we're getting up early again tomorrow, so the trip report will have to wait until Thursday evening.  I'm off to bed!  EDIT -- TRIP REPORT IS NOW BELOW.

*We would like to bag 21 specific peaks before we leave for the John Muir Trail in August (Sage's remaining 52WAV peaks and most of Alex's remaining Trailwrights peaks).  We are picking up additional peaks with our hikes, so if we don't get all of those specific, intended peaks, then we will assuredly get over 21 peaks total if you include our extra, for-the-fun-of-it peaks.

Zealand Trail, Twinway, Zealand Spur Trail.  11 miles roundtrip, 2300 feet of elevation gain.  This peak was to check another item off Alex's Trailwrights 72 list and our Desserts on the 48 quest.

We had boots on trail at 6:30 and quickly walked the relatively flat 2.2 miles to Zealand Hut.  It was going to be a hot and humid day, and the girls had karate in the afternoon, so our goal was to knock this one out as fast as we safely could.  We packed light -- the girls and I had the bare essentials.  At this point, we usually want to carry full JMT packs on our hikes -- our exceptions are bushwhacks (when gear and clothing tend to get torn) and days like this one, when the main goal is to see how fast we can safely tag the peak and get back down to the car. 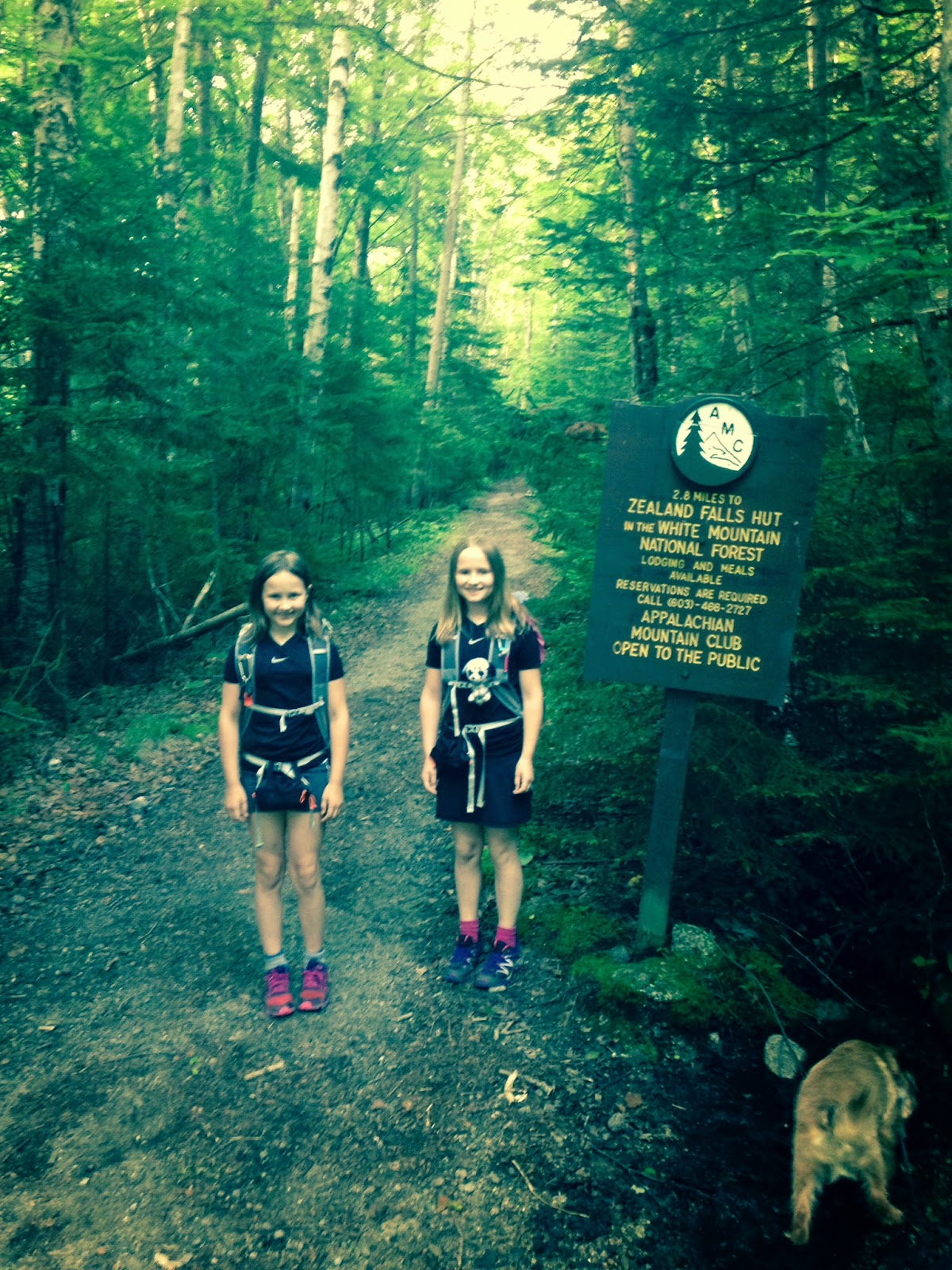 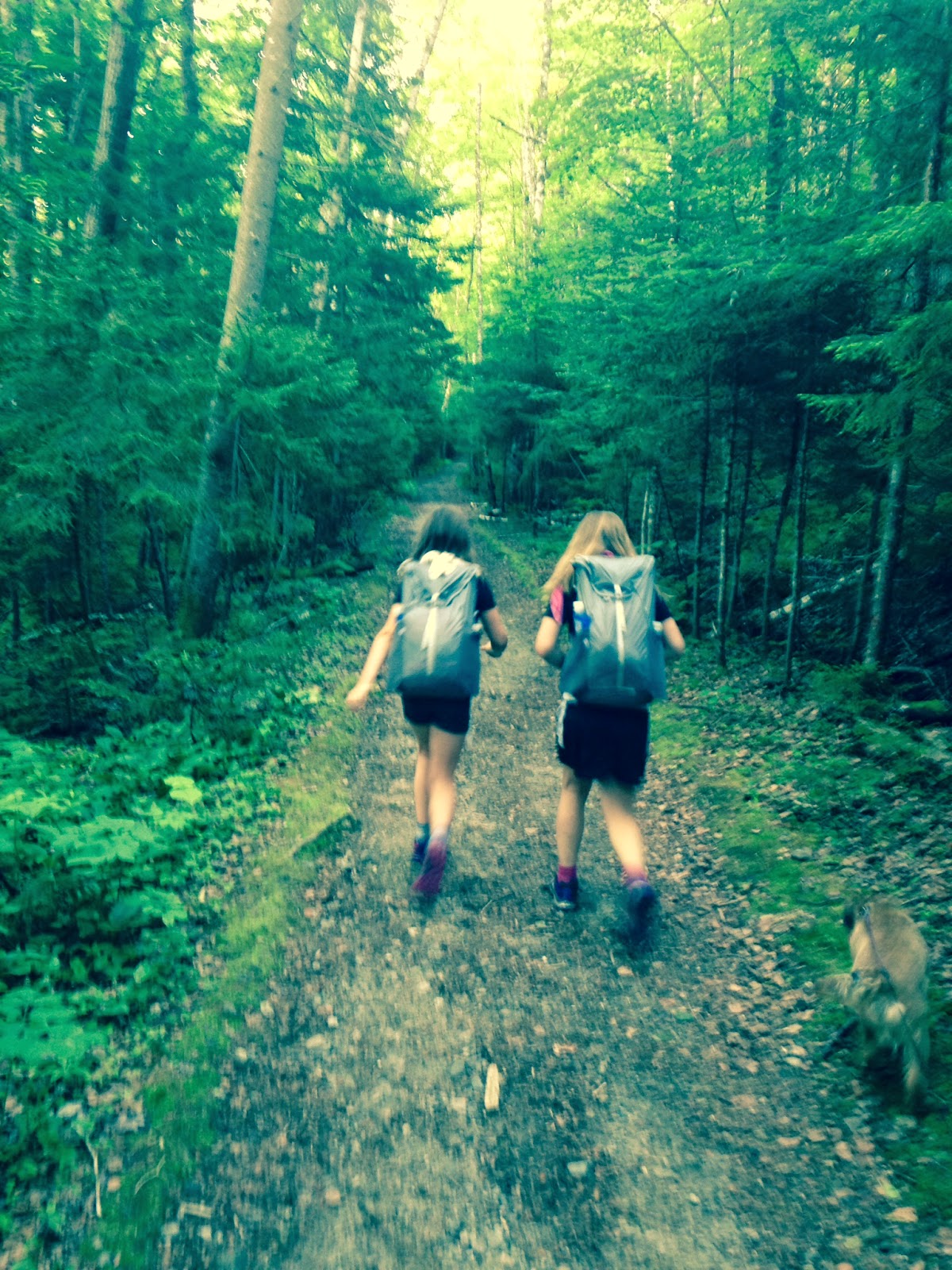 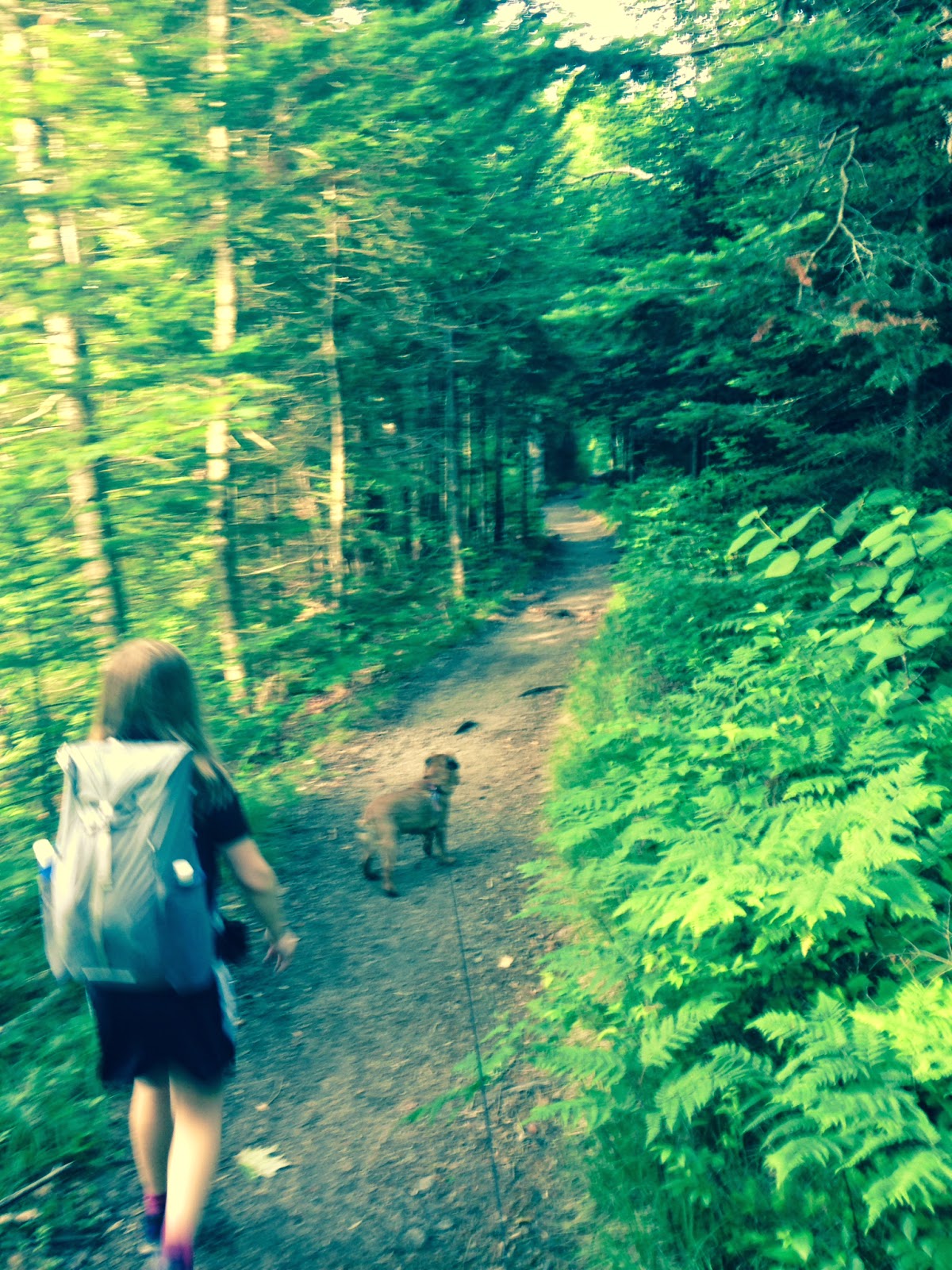 The walk to the hut is always enjoyable.  The ponds and bridges are a special treat.  It's the perfect hike for a beginner or a small child -- the hut itself makes a fine destination for those who are not yet ready to trek up the mountain. 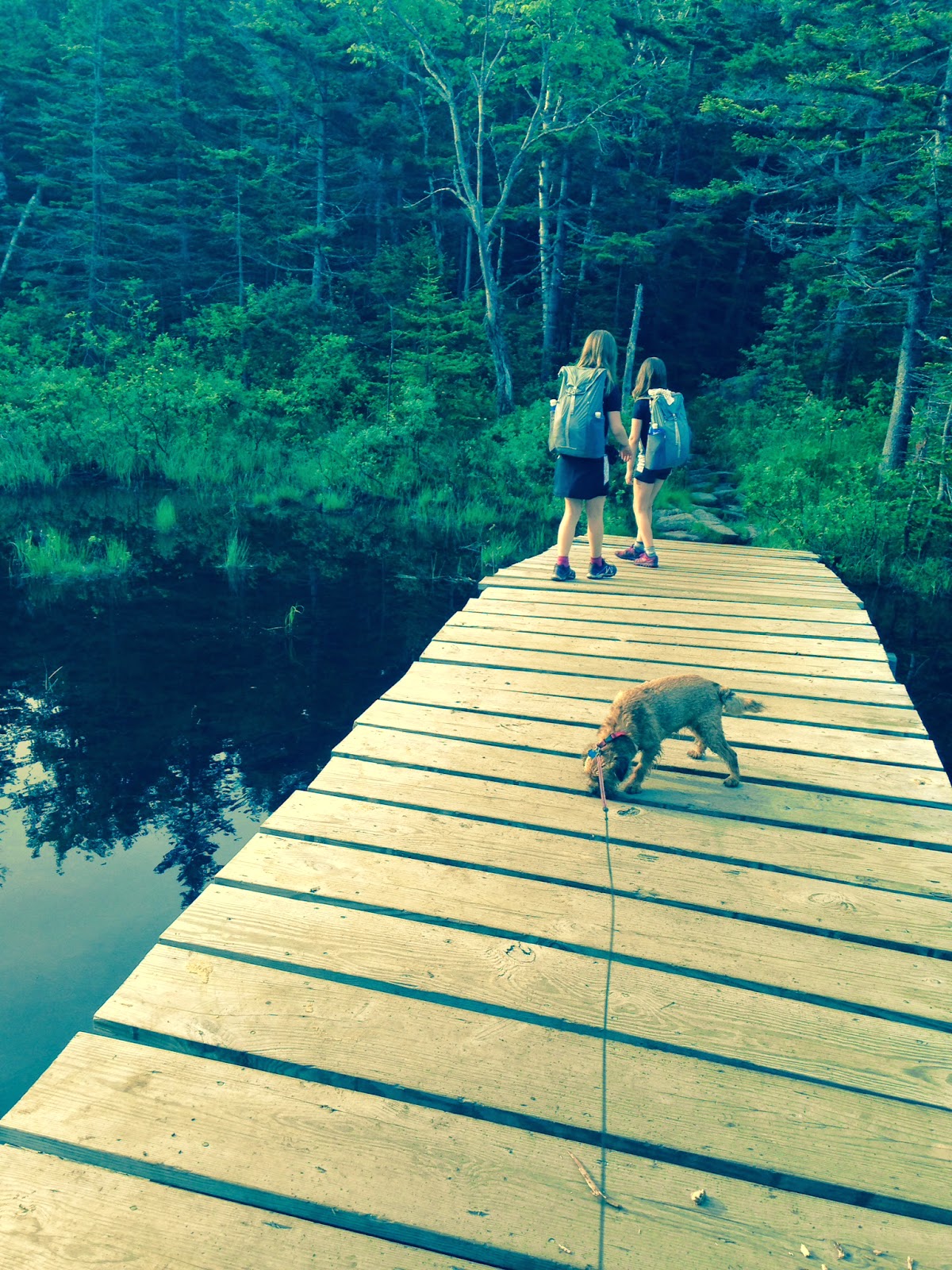 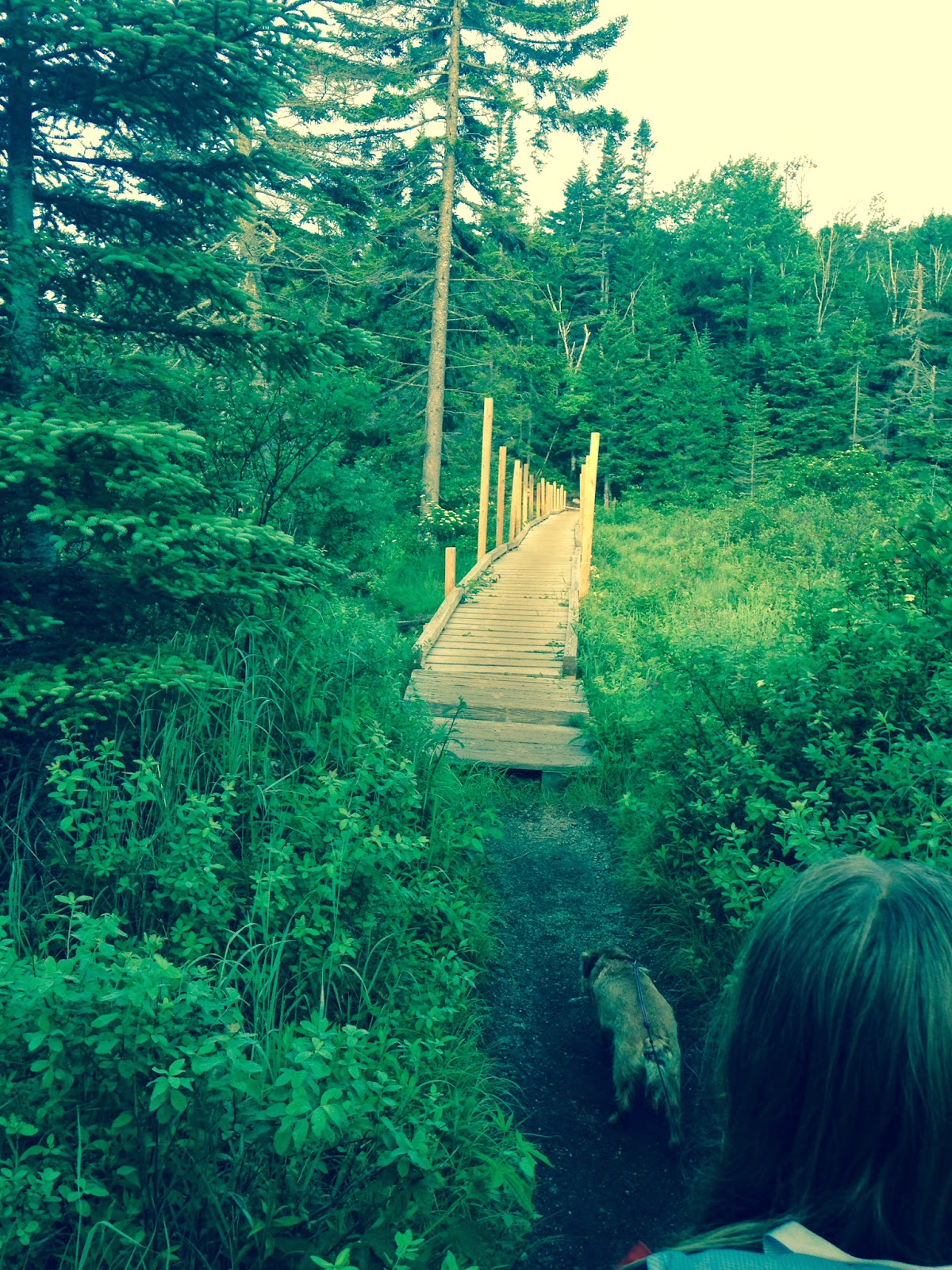 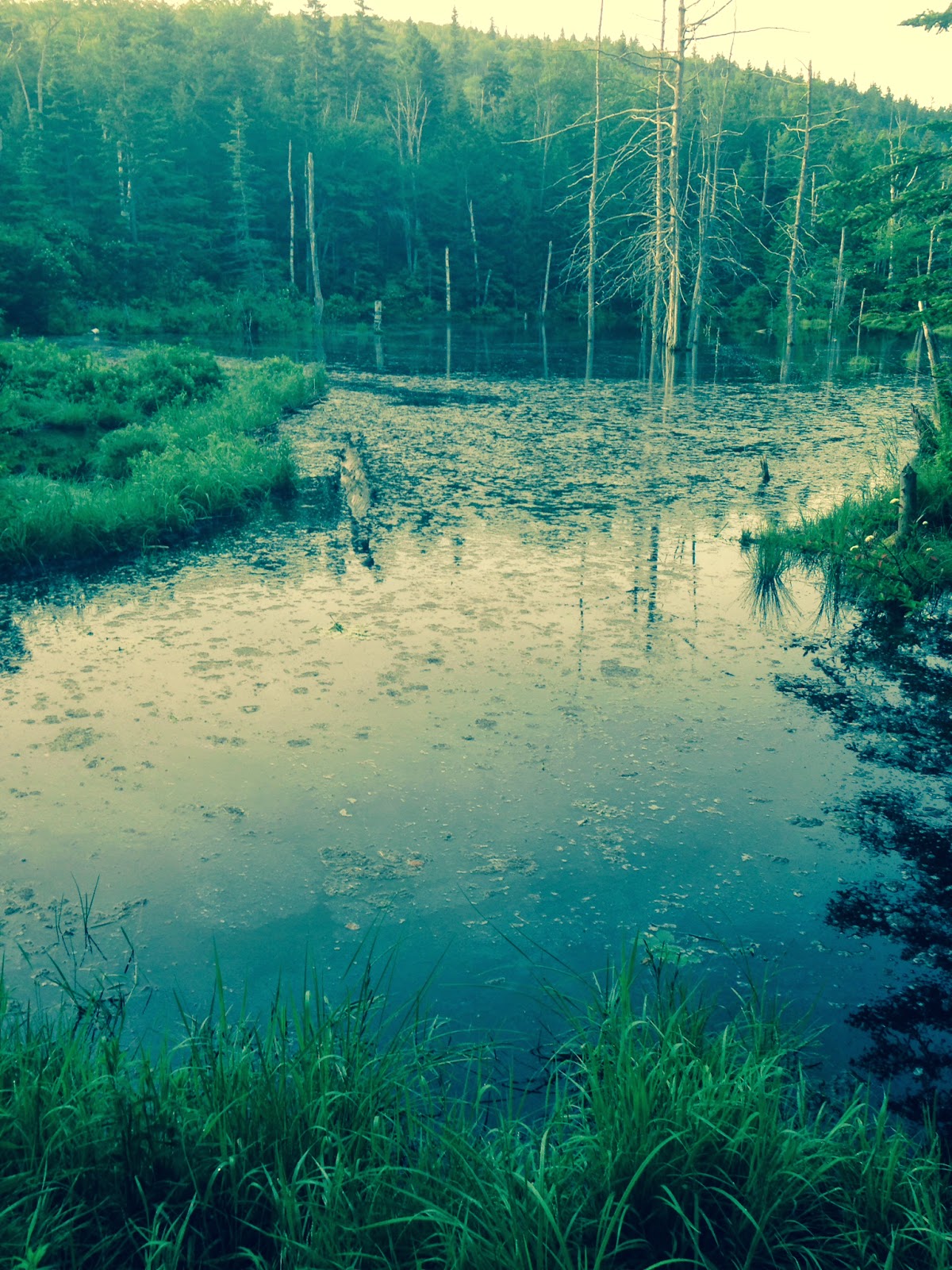 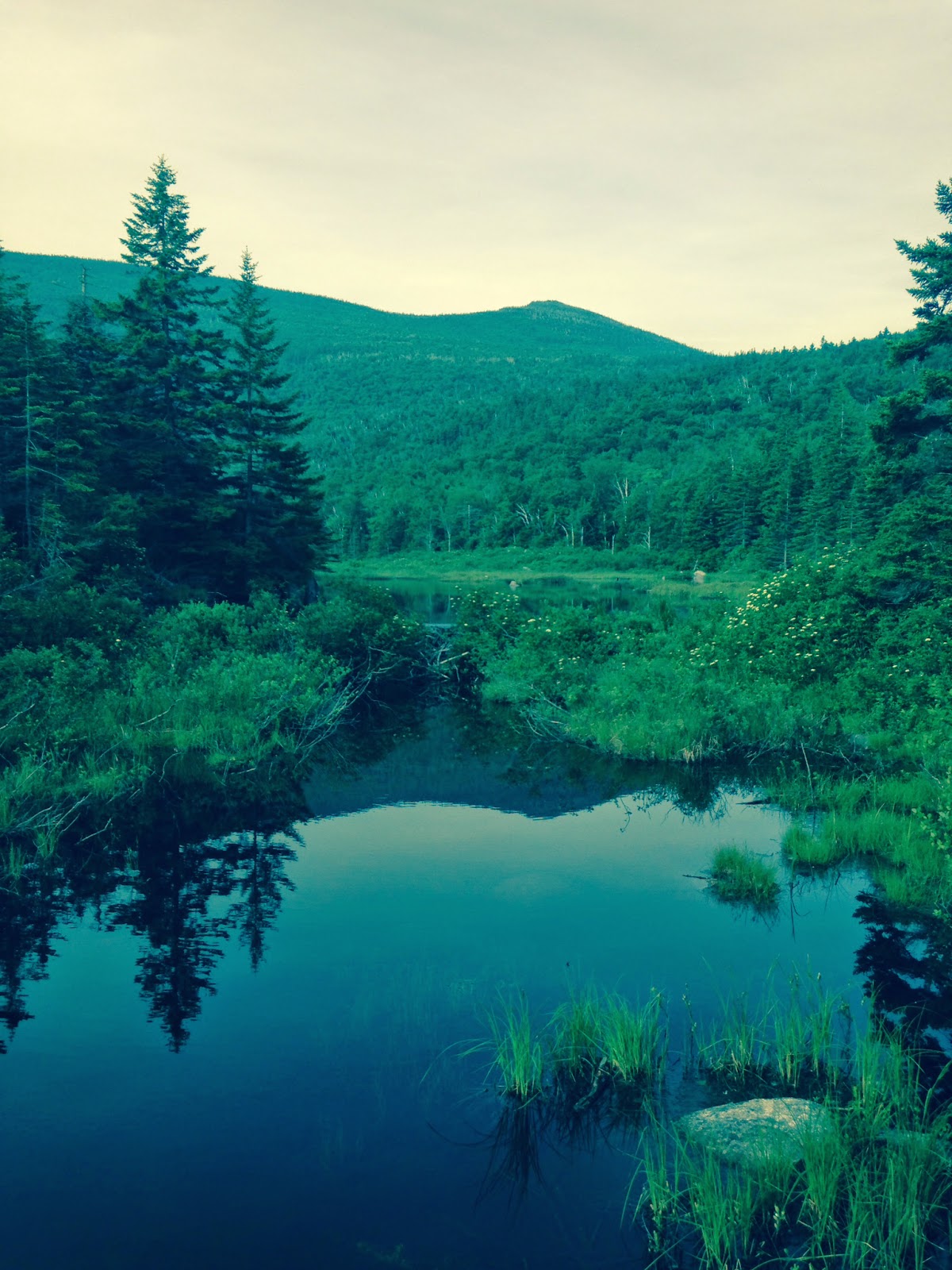 The only steep section between the parking lot and the hut is the final tenth of a mile. 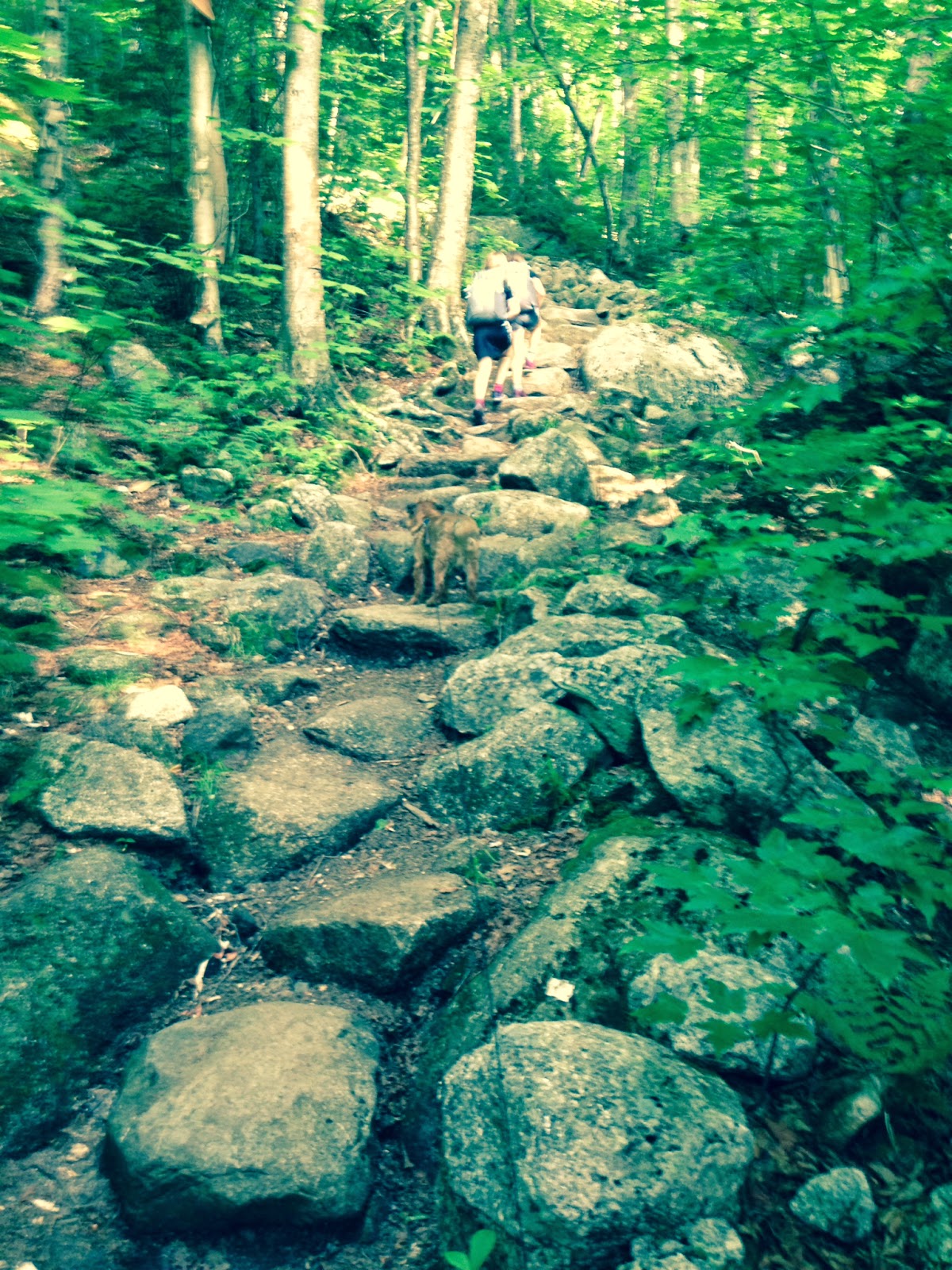 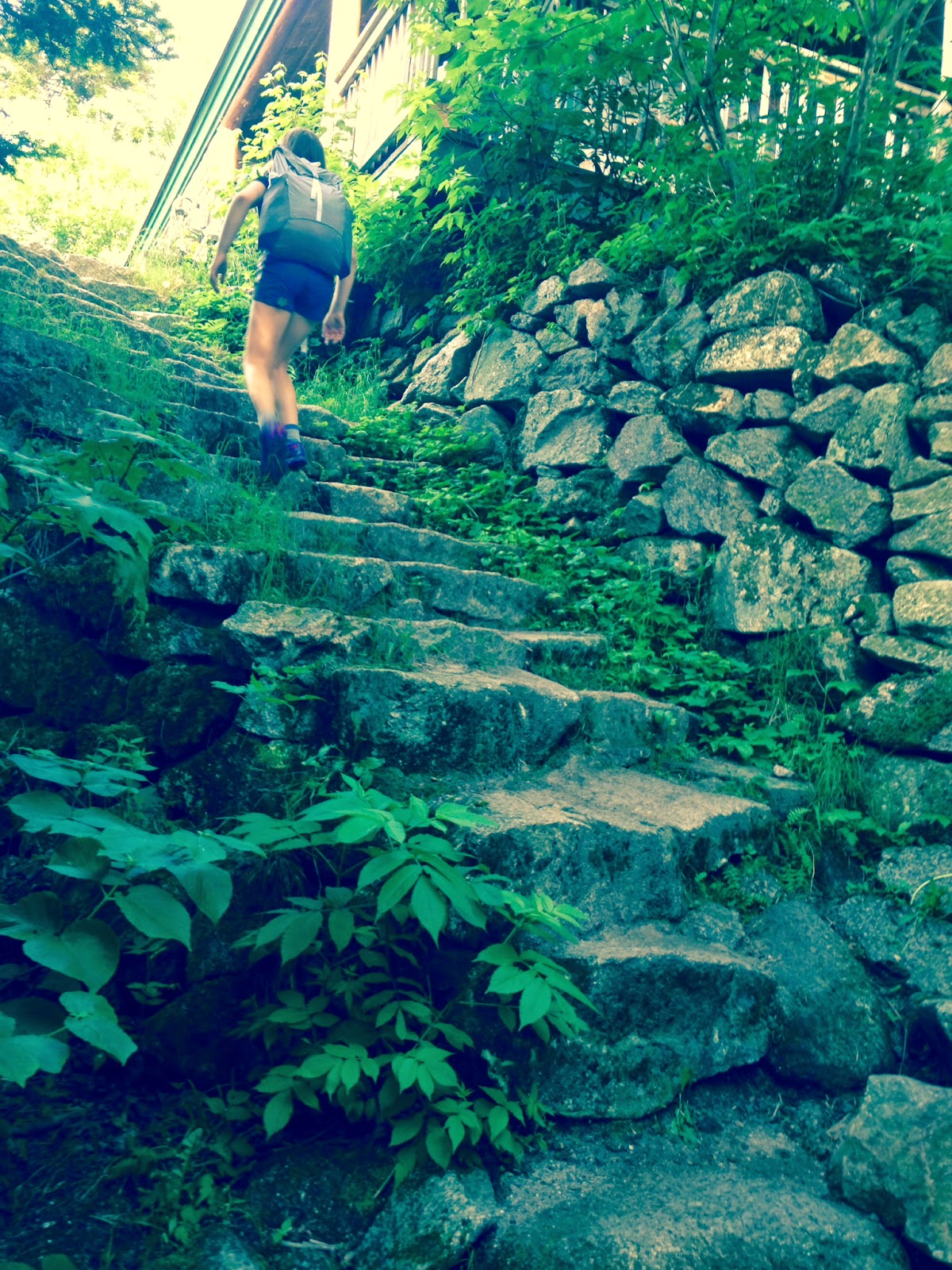 We arrived at the hut at 7:30.  A group of what looked like Boy Scouts were gearing up outside the hut, having just finished their breakfasts.  The girls and I refilled our water bottles quickly and got a move-on -- we did not want to get stuck behind a large group.  Two of the crew began just before we did...Alex asked politely if we could pass.  They obligingly stepped aside and we started the long and steep 1.2 mile slog up the Twinway toward the Zeacliff look-out.

The heat was beginning to settle in, so I made sure to monitor the girls on the way up...I did not want their zeal for a fast summit to negatively affect their health...the humidity was nasty and I did not want either of them (or me!) to succumb to heat exhaustion.  We made frequent hydration breaks. 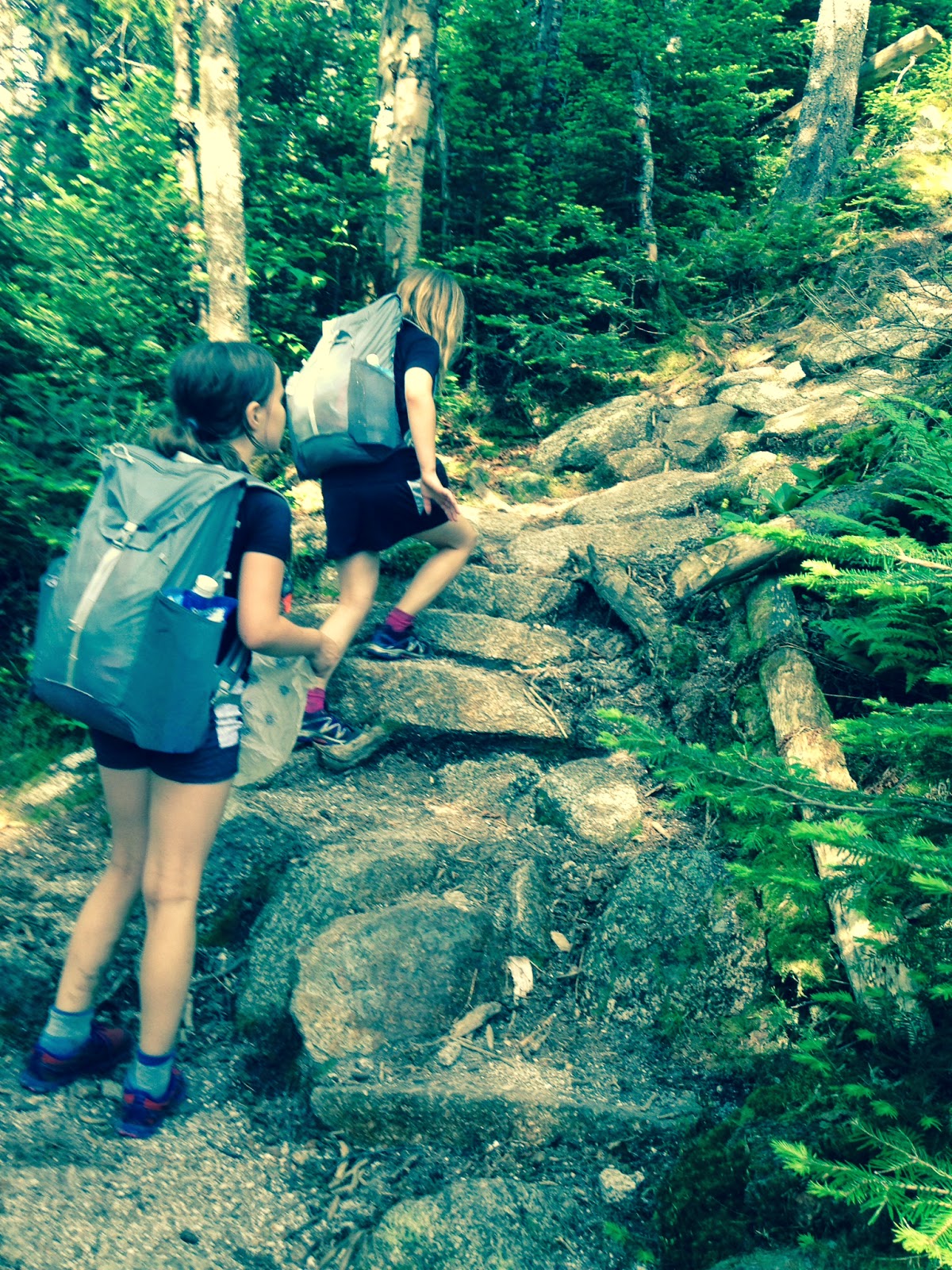 Life became much easier once we reached the Zeacliff look-out.  The heat was still there, but at least we weren't climbing the steeps anymore. 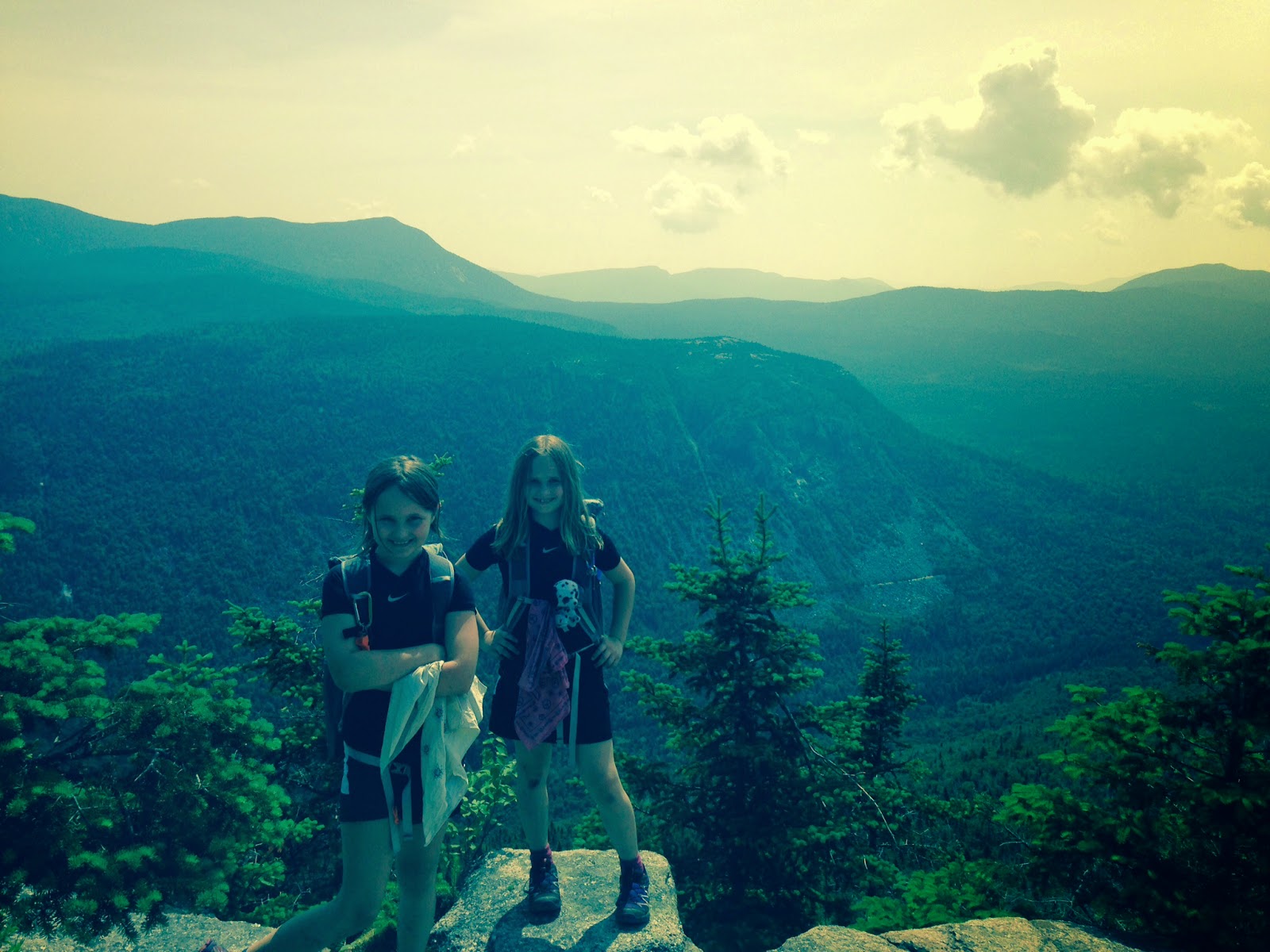 We met two happy and kind Appalachian Trail southbounders on the ledge.  We exchanged pleasantries for a few minutes before they continued on their way.  They went ahead of us and were gone in a flash...I explained to the girls that weeks and weeks of walking will make you a superfast hiker, and I reminded them of how quickly we walked during the last leg of our Camino last year.

Onward, toward the summit of Zealand. 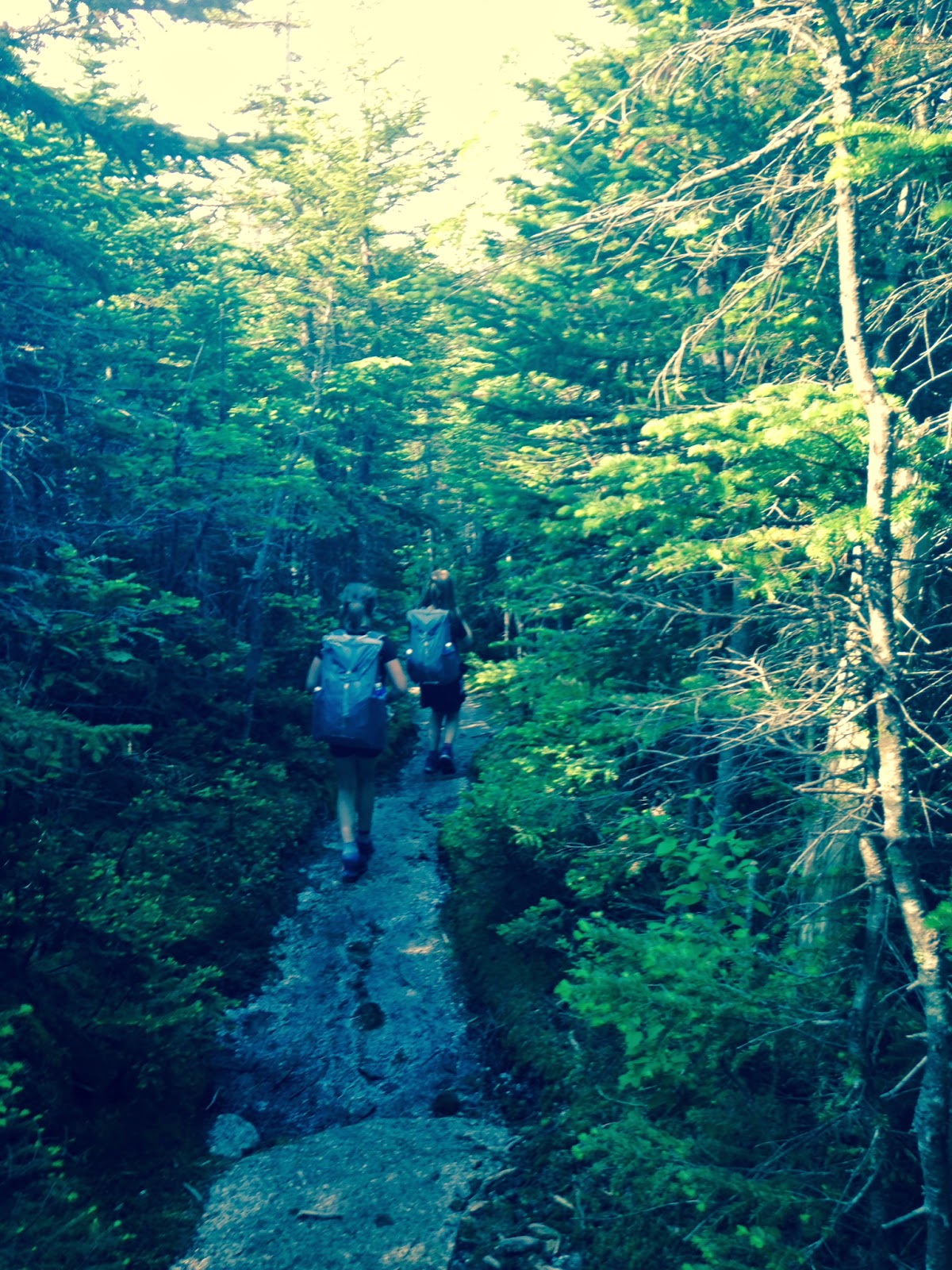 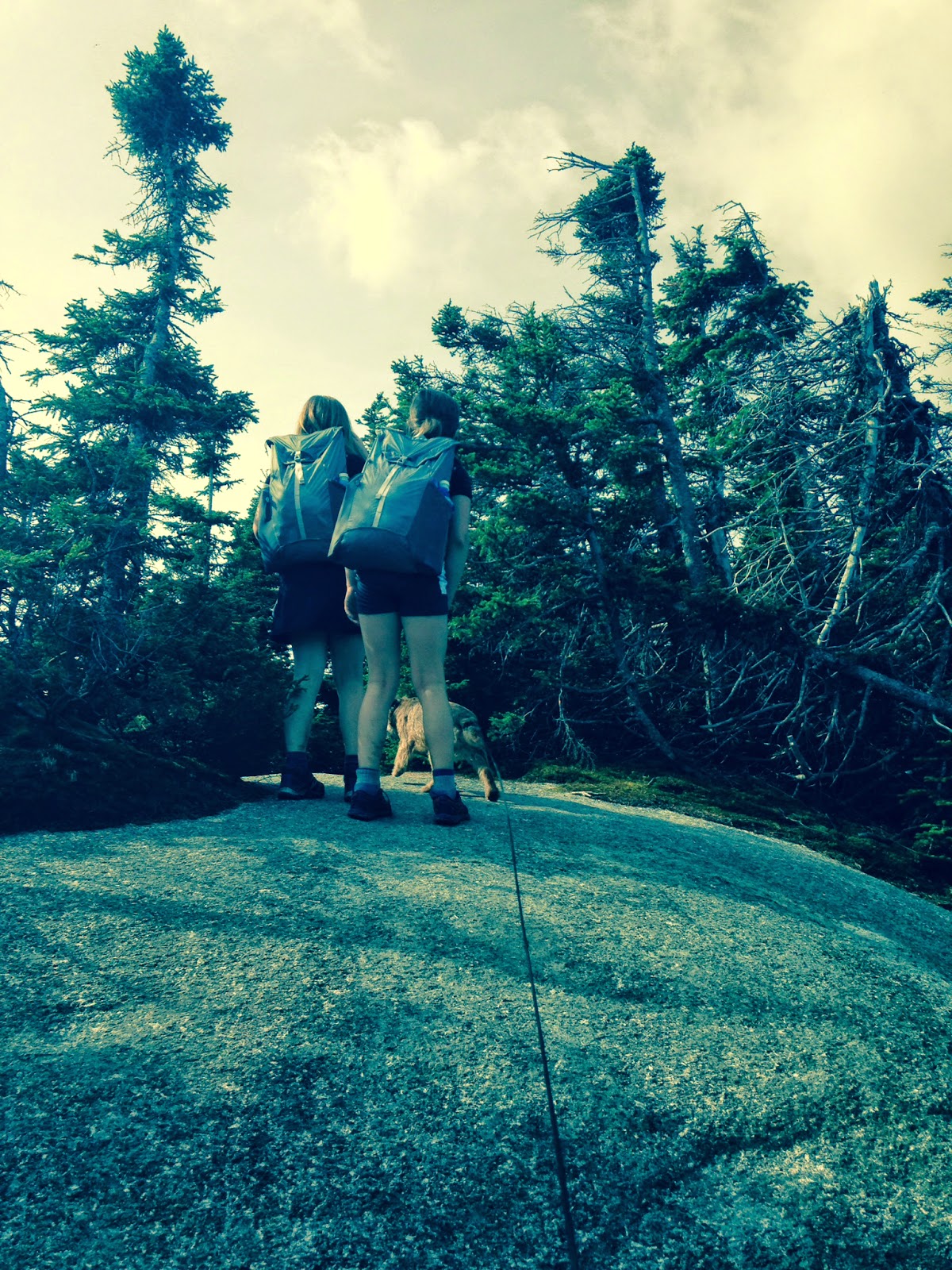 We caught some views through the trees every once in a while... 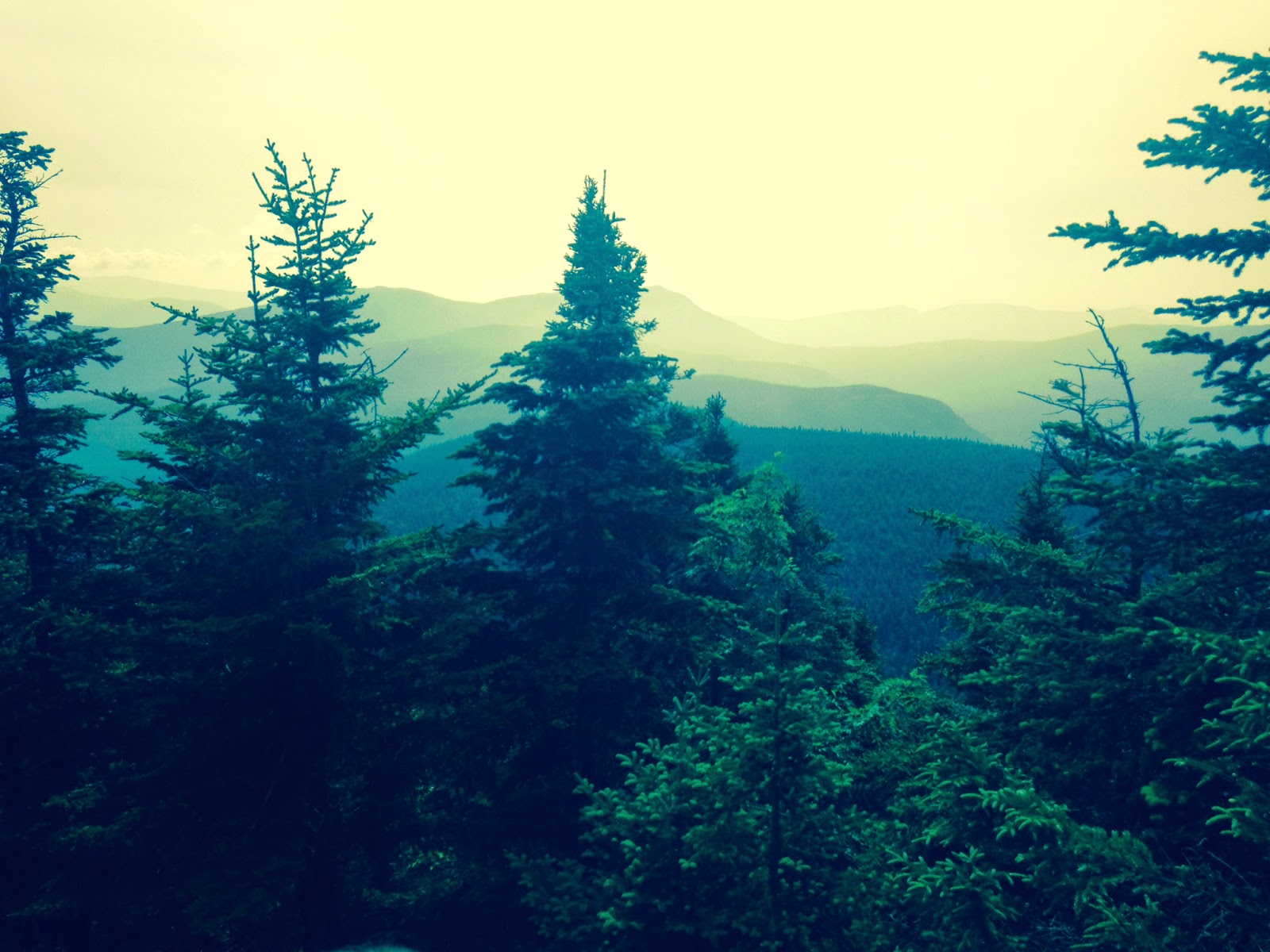 The trail from Zeacliff to Zealand is relatively easy, with a few moderate ups and downs here and there.  There are only one or two steep bits, and they're over before you know it. 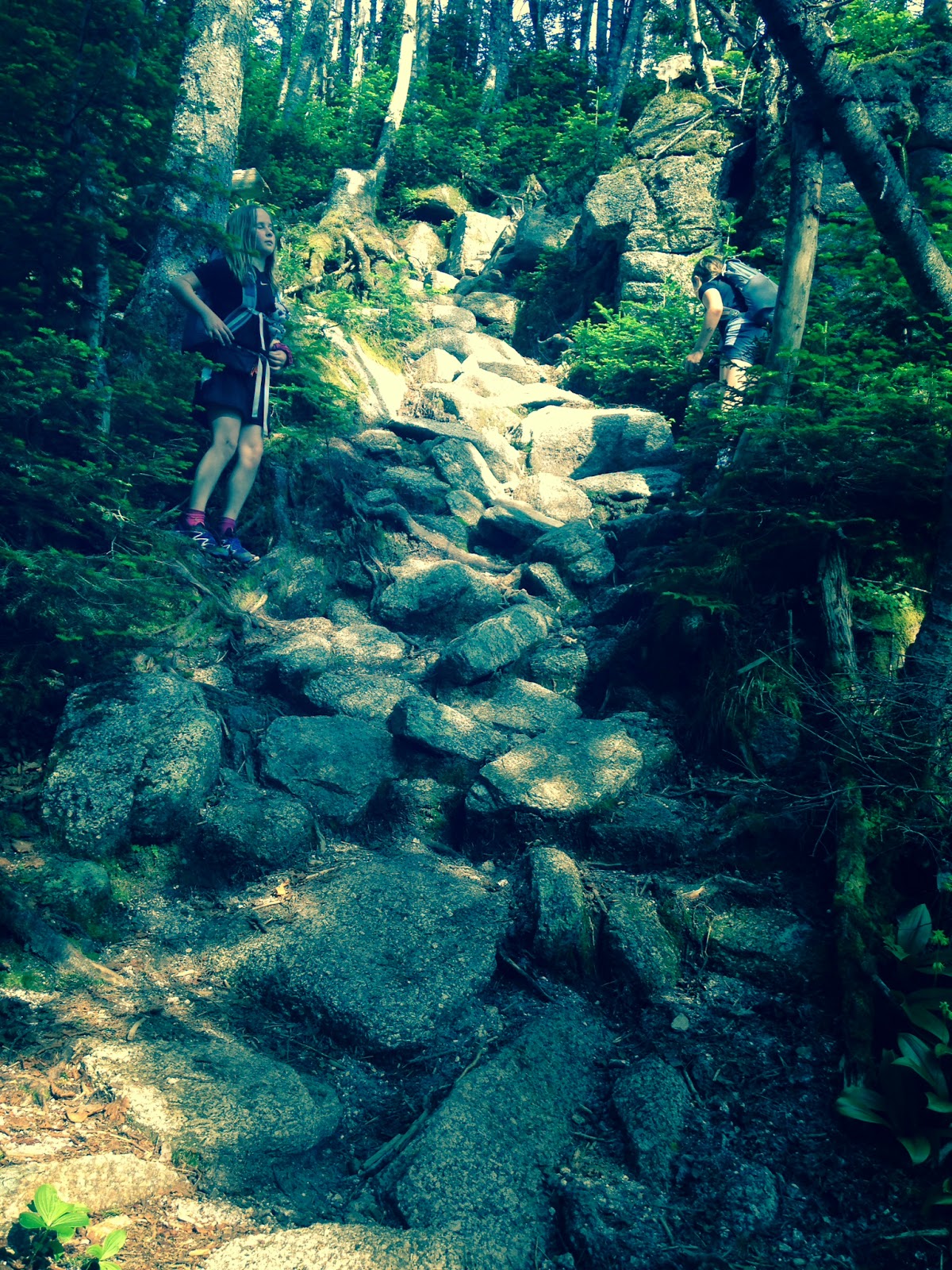 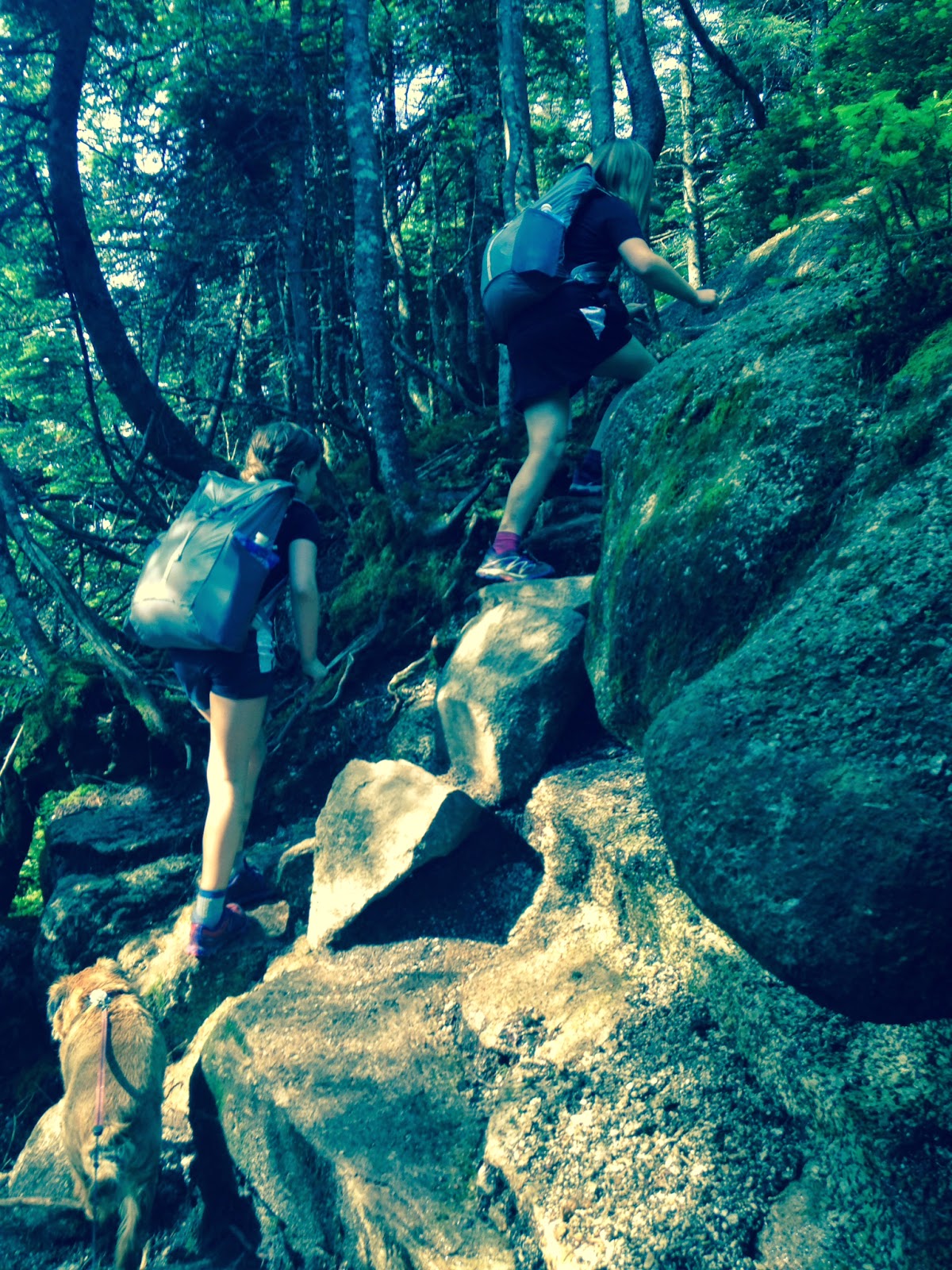 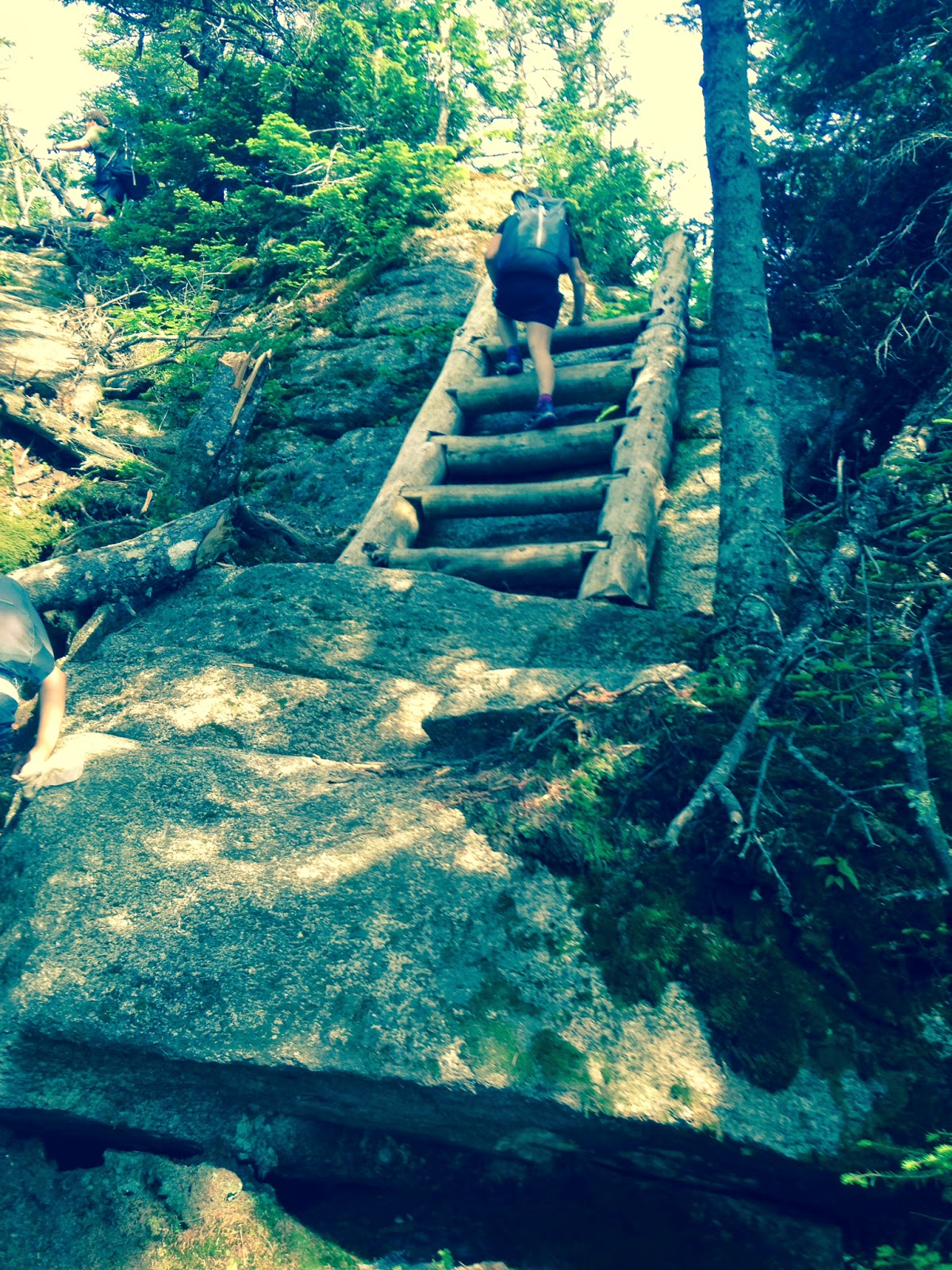 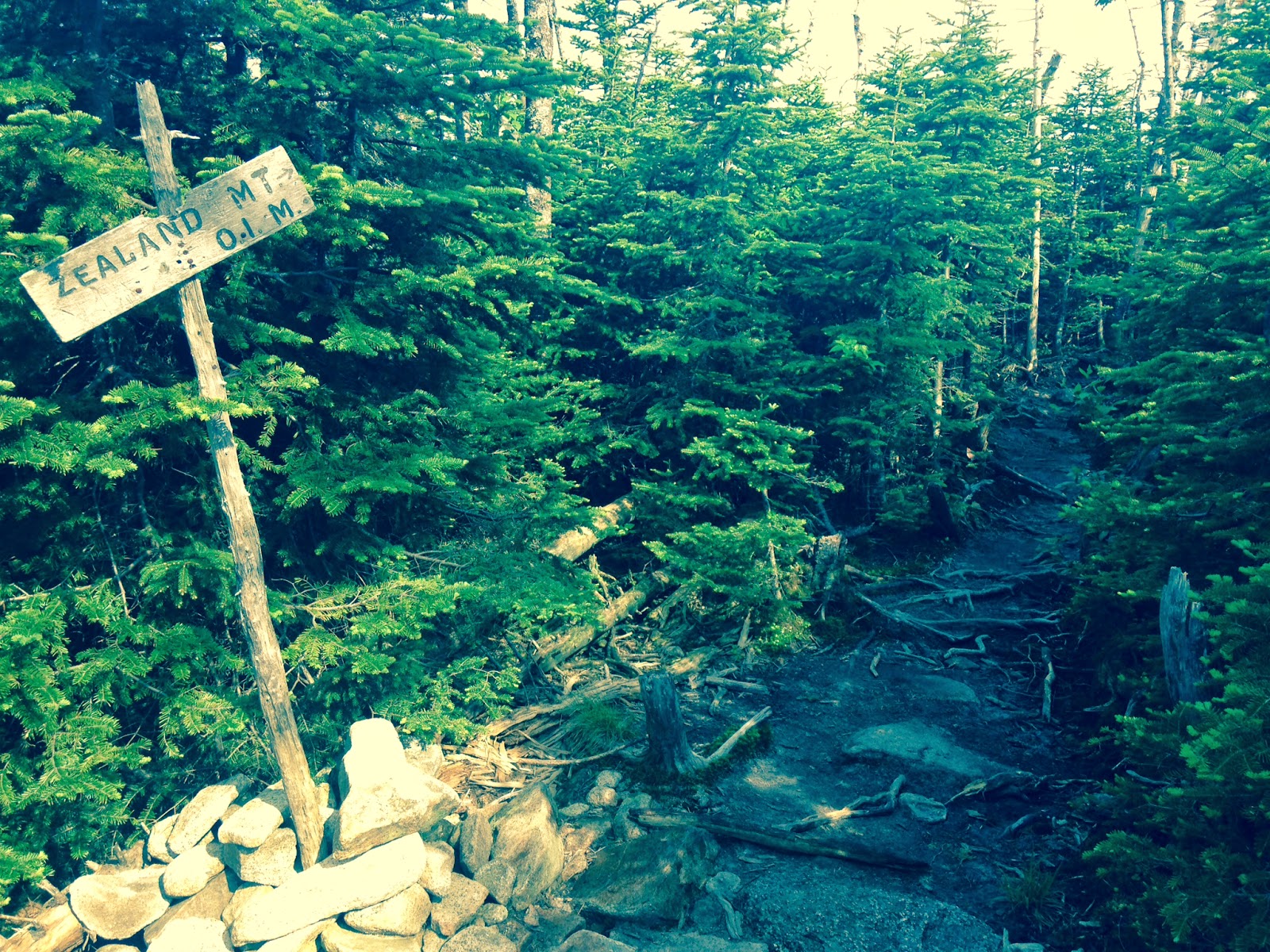 We walked to the summit... 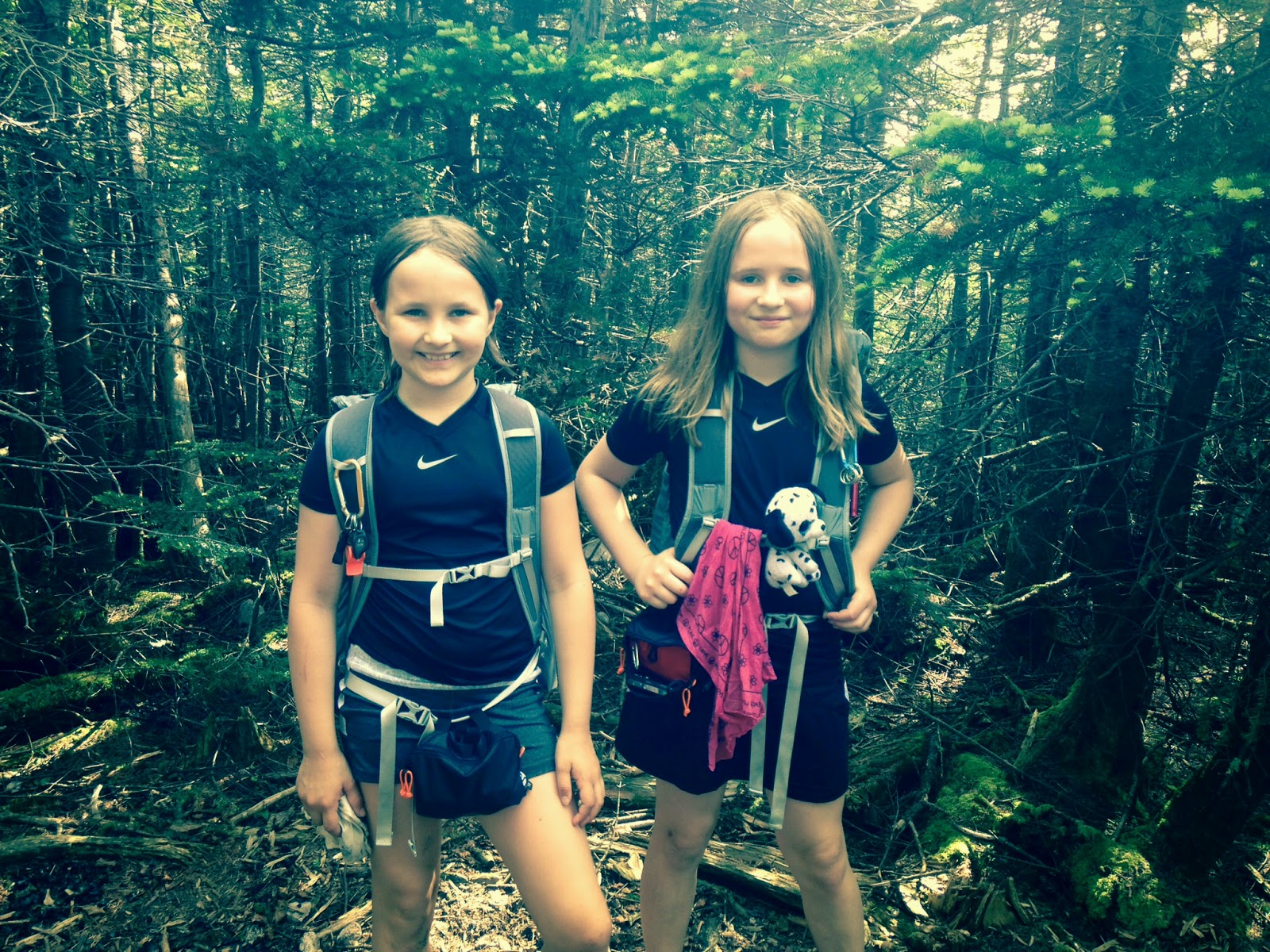 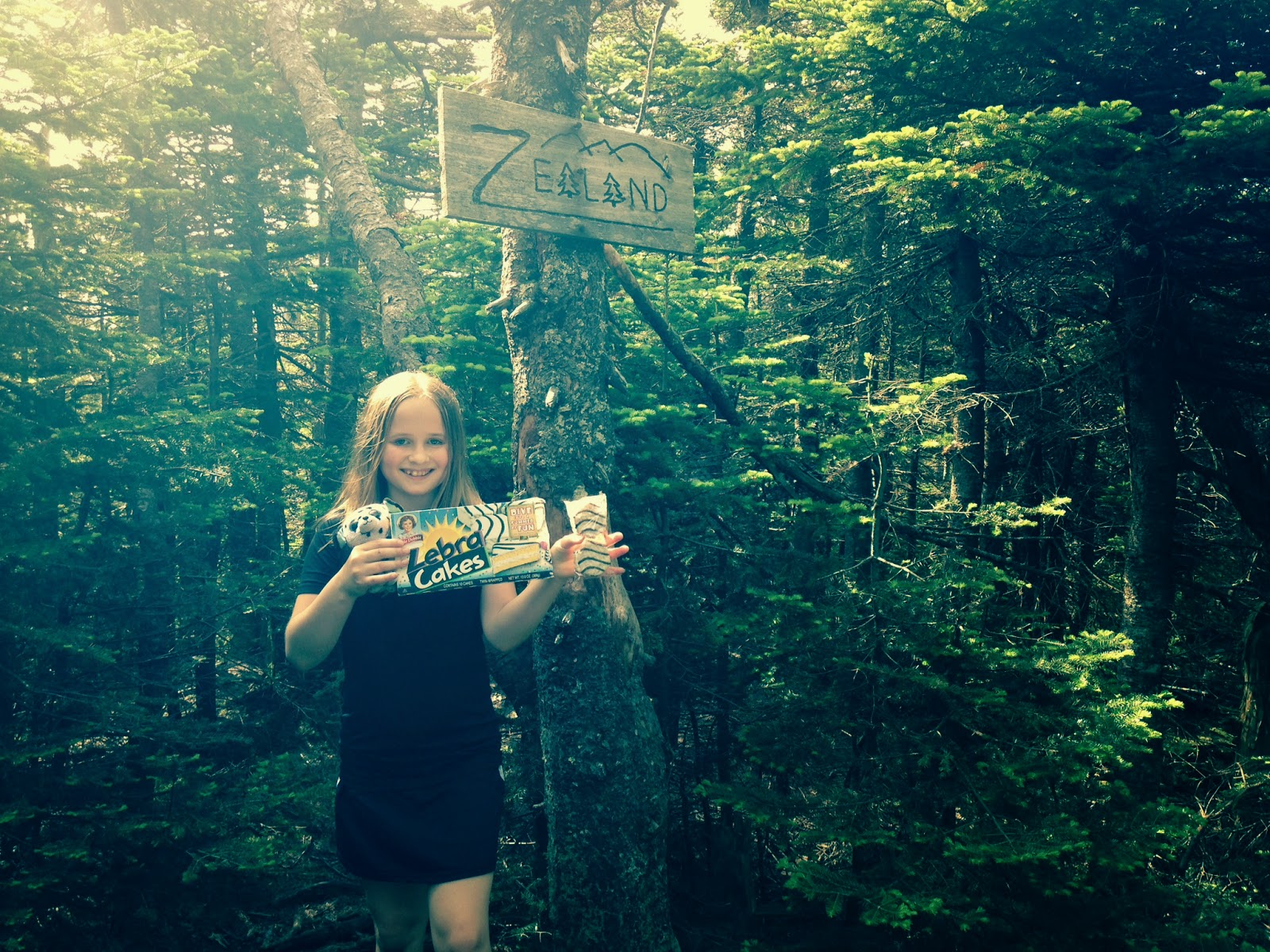 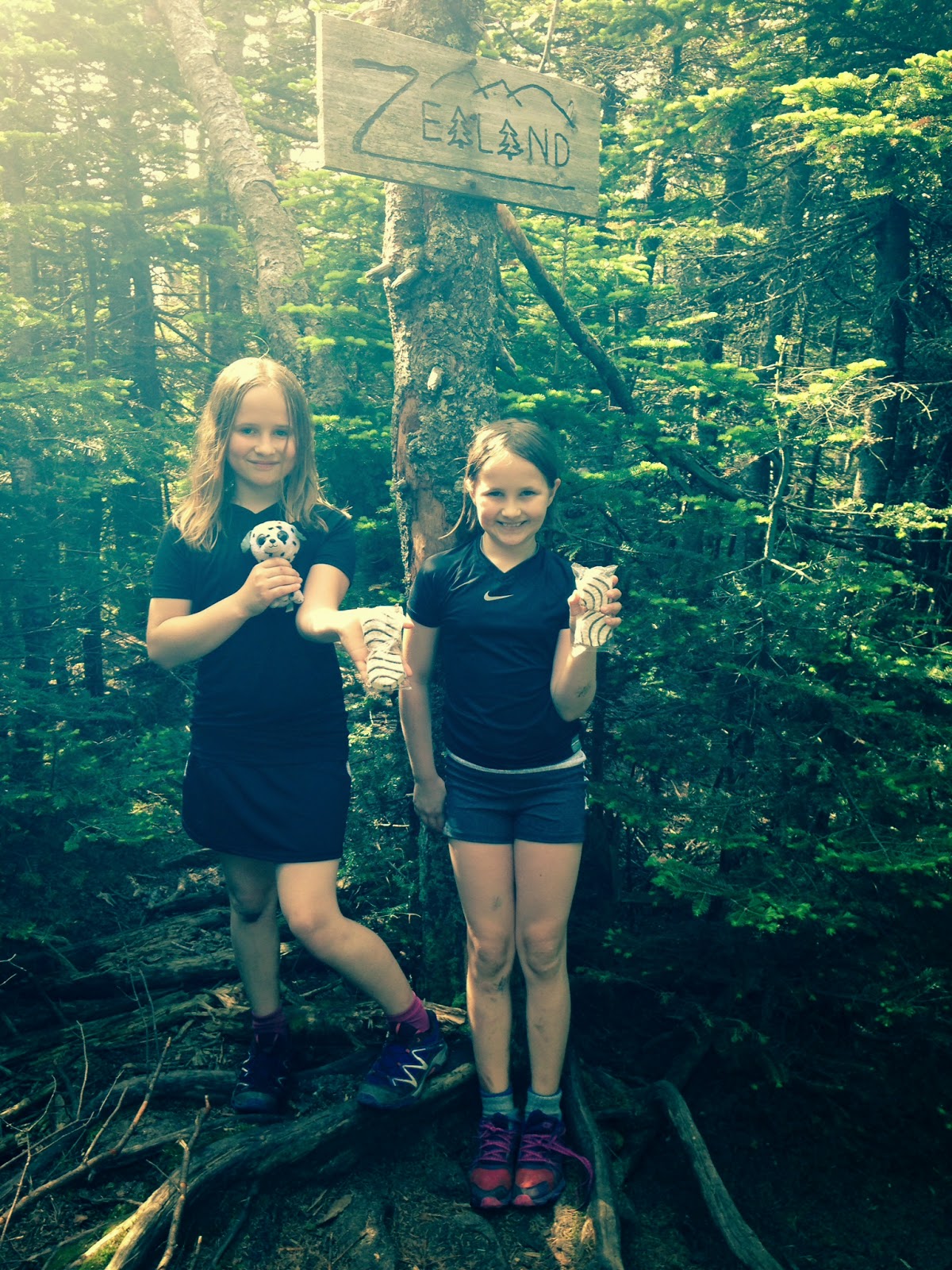 We ate, we drank, we began our descent.

On the way down, we passed the Boy Scouts we had seen at the hut, plus another group that looked like they were part of an outing club. I have to hand it to all of them -- by this time, the day felt so hot and humid that there is no way I would have been able to ascend.  Descending at this time of day was fine  Ascending..?  Nope, not me.  Not in that heat and humidity.

At the Zeacliff look-out, we met a group of girls ages 10-12 who were part of the Waukeela girls' camp.  They were a great group of kids and we had fun talking with them.  After a pleasant chat, we continued our descent.  Once we reached the hut, we checked the time -- 11:00 -- and decided we had half an hour to soak ourselves in the delightfully cool falls. 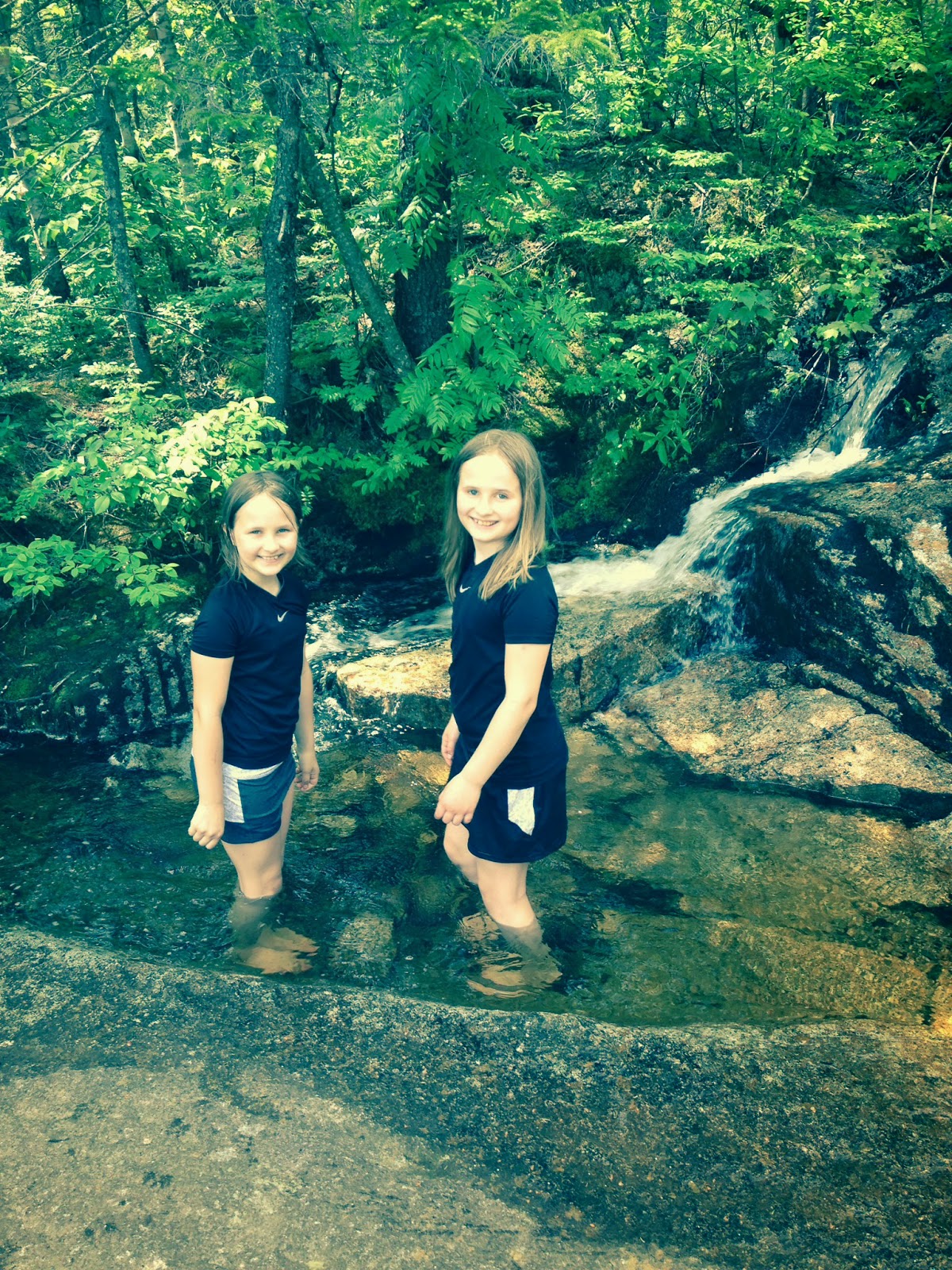 We pulled ourselves away around 11:30 and got back down to the car by 12:30.  We had enough time to make it home, shower, and head to karate.

Congratulations to Alex on another Trailwrights peak.  This was her fourth time visiting Zealand (and Sage's second), but she's always done it as a combination hike with other peaks (the Bonds and Guyot).  Trailwrights rules dictate that only one peak per hike can be counted for the list...checking off multiple peaks in one hike for Trailwrights is not allowed.  Hence, this special hike for Zealand alone.

Hope everyone is having a great 4th (in spite of the rain).  I'll post the trip report for The Horn, The Bulge, and Cabot by late tomorrow evening.
Posted by Patricia Ellis Herr, Alexandra Herr, and Sage Herr at 9:53 PM