After I picked up the girls from their summer camp this afternoon, we drove north and hiked Eastman Mountain.  I'll post a trip report late tomorrow evening.

Hope everyone is enjoying their summer!

This month is an incredibly busy one, so you'll have to forgive any recent less-than-stellar writing.  We don't usually do this many hikes in such a short period of time; the girls also have their homeschooling work, karate, friend-time, field trips, and summer camp.  The constant activity means I write trip reports late at night, when half my brain has already fallen asleep for the evening.  I apologize if any typos or grammatical errors have slipped by undetected.

Monday was the start of a two week summer camp.  The camp ends at noon each day, so the girls and I are still able to hike in the afternoon.  Once upon a time, we'd only hike if we could leave in the morning, but we're experienced enough now to be comfortable coming out in headlamps.

Our peak for the day was Eastman Mountain, a peak close to the Baldfaces in Evans Notch.  We were at the trailhead at 1:45 and had boots on trail at 2.

The first 0.7 miles is wide and easy.  A popular local swimming hole, Emerald Pool, awaits the hot traveler at the end of this stretch; we skipped the Pool in favor of the mountain.  The girls and I hoped to take a dip in the water on our way out, but that didn't happen (more on that later). 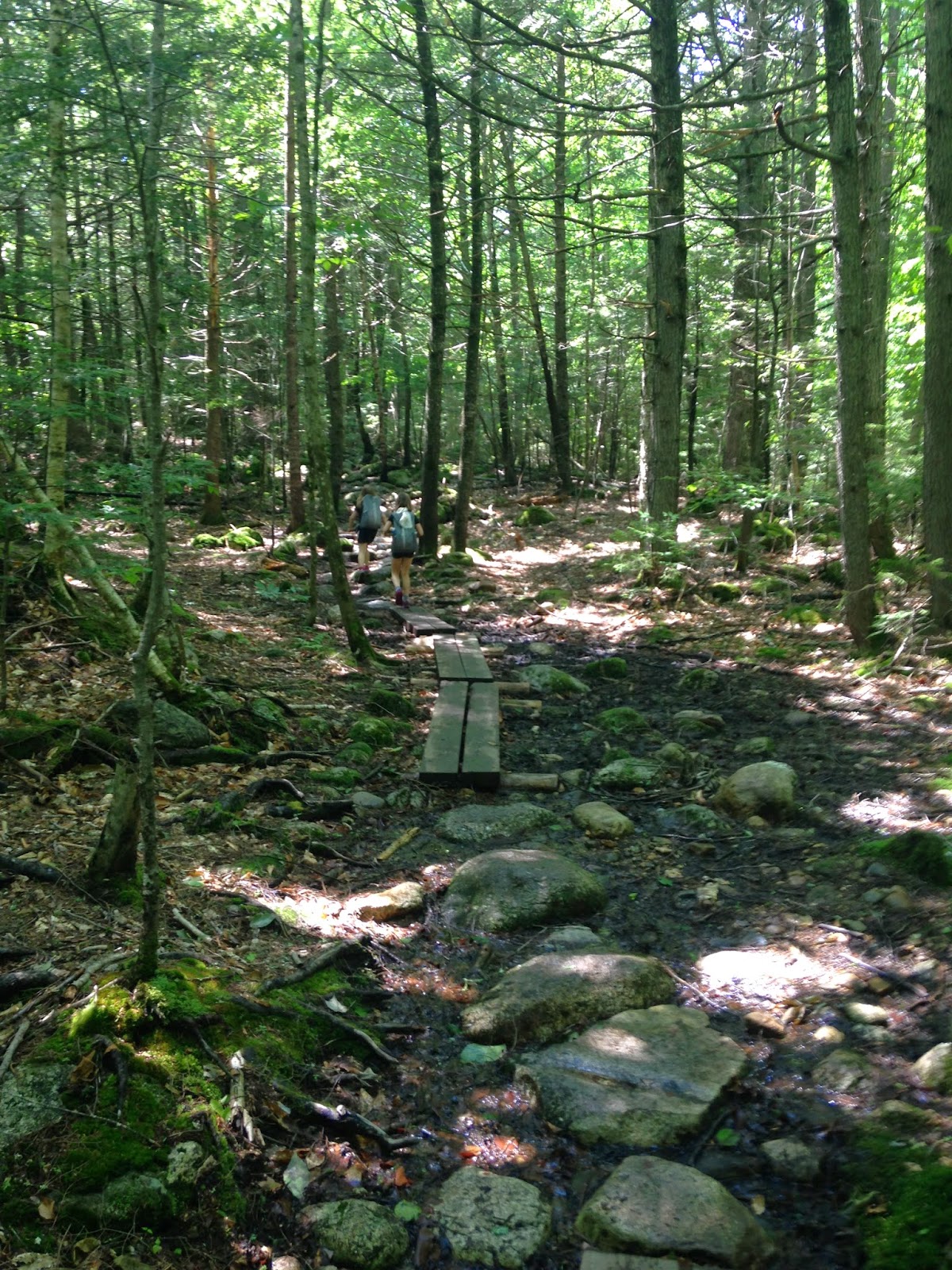 We reached the turn toward Slippery Brook Trail and headed up. 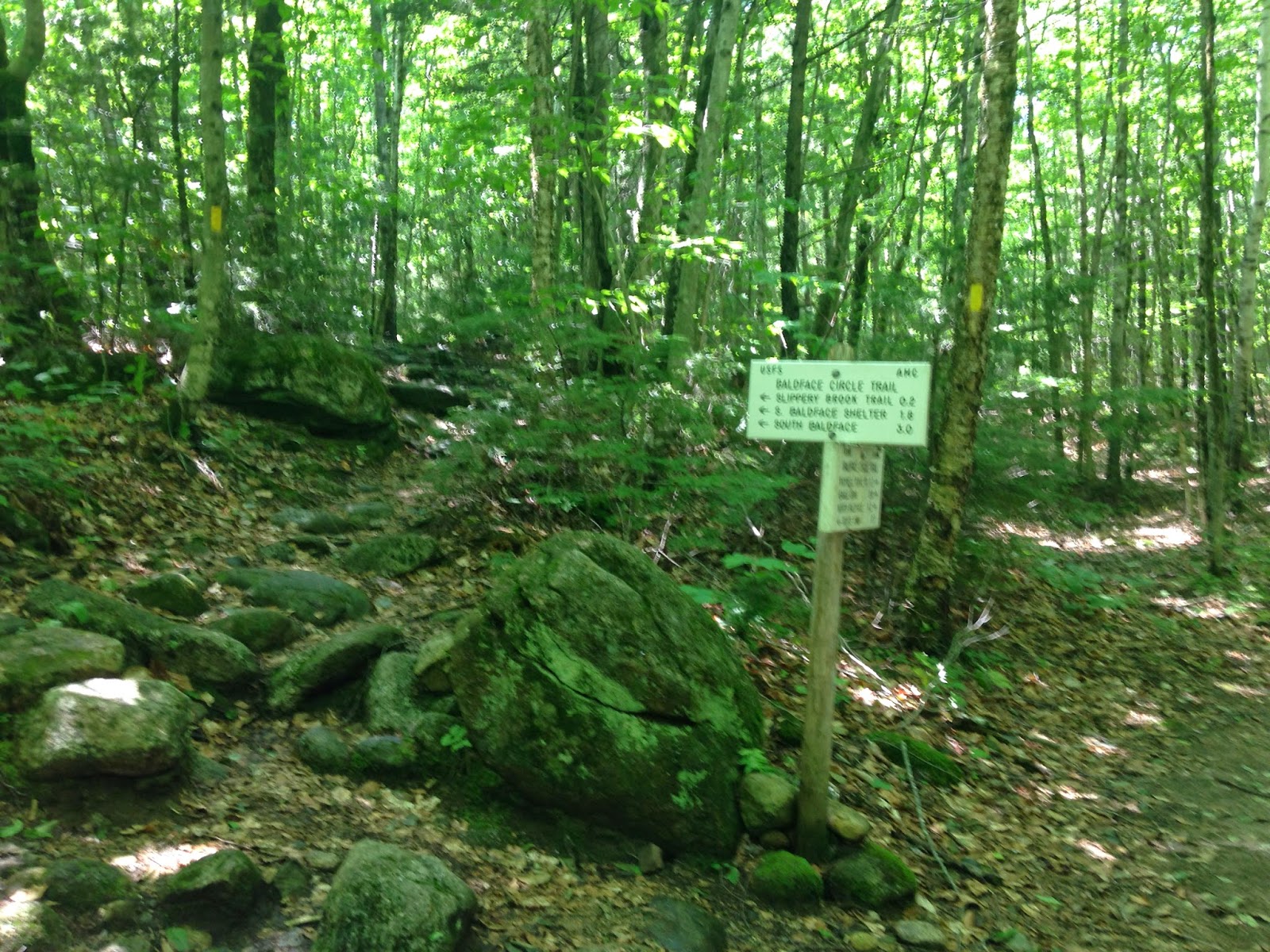 Before we went the right way, we went the wrong way...in the photo above, you can see the location of the trail.  You turn left at this sign and follow the path, which immediately swings right and parallels the trail you just exited.  What you can't see in this photo is that to your left, a wide path of sorts leads up into the woods.  In other words, it's easy to turn left and go straight, missing that immediate right turn.  The girls and I went straight into the woods for a few minutes before realizing we weren't on the trail.  When we returned to the sign and took a better look, we realized our mistake.

The trail itself is well blazed and obvious (once you're on it!). 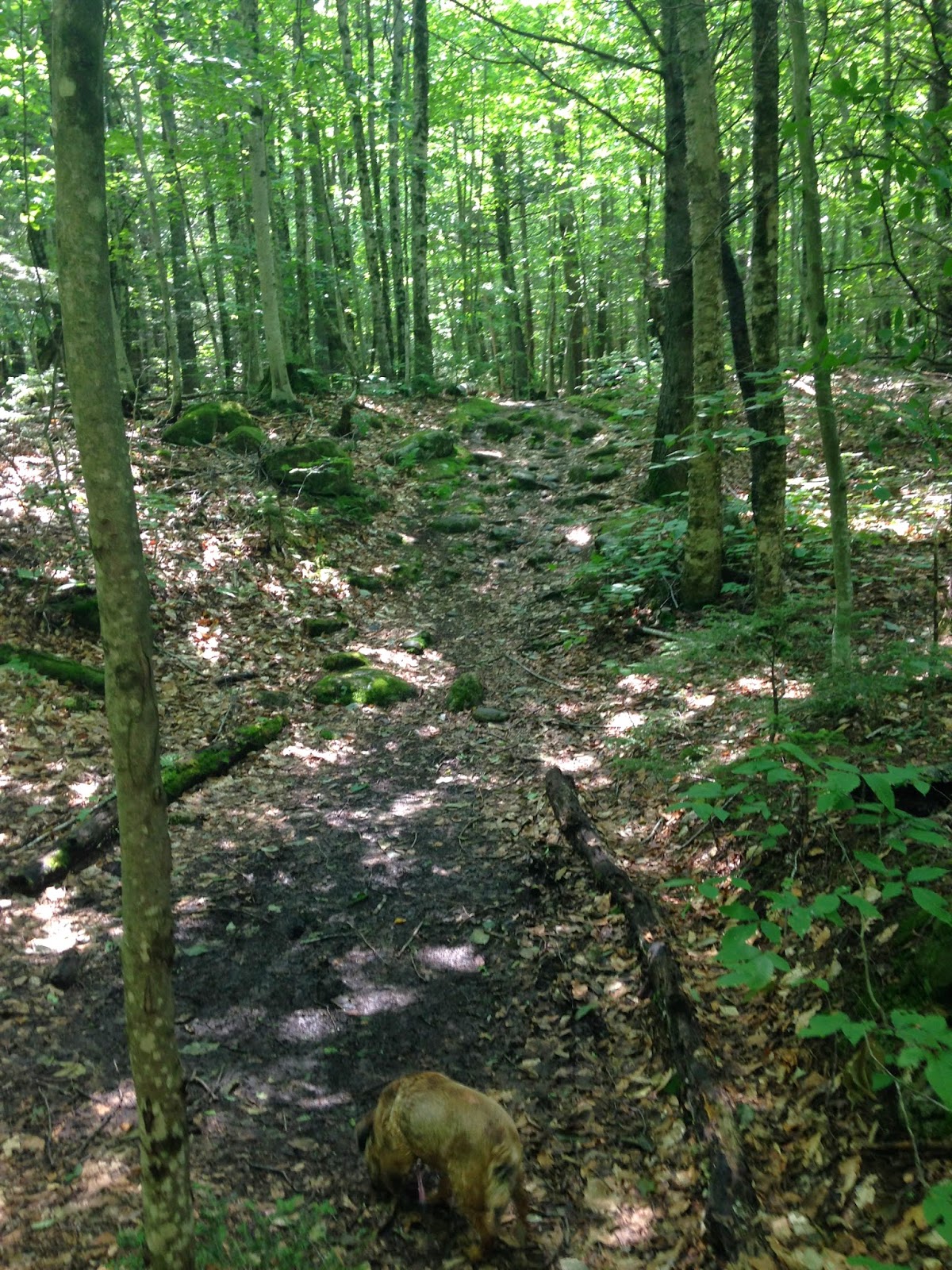 We came to the Slippery Brook Trail/Baldface Circle Trail junction in another 0.2 miles. 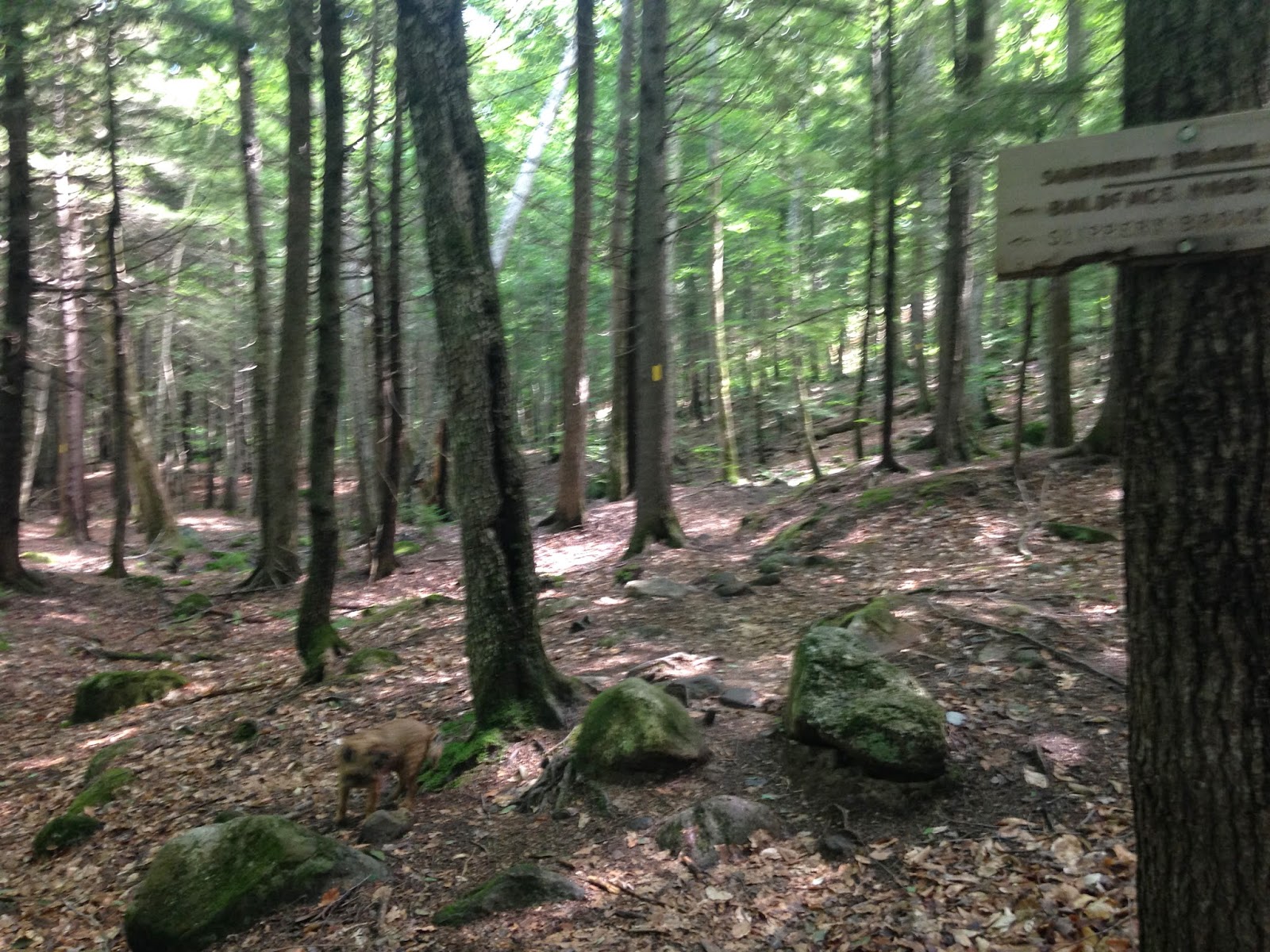 Slippery Brook Trail has easy and moderate grades for most of the way up.  Nevertheless, the humidity of the early afternoon made the trek feel difficult.  The girls memorized their lines (their camp is putting on Shakespeare's The Merry Wives of Windsor) as we ascended -- this mental effort took their minds off their physical efforts.  Slippery Brook crosses many little...well...slippery brooks, so every time we crossed water, we dunked our bandanas and cooled our heads and hands.  The combination of line-memorization and water-dunking made the hot ascent bearable.  In spite of the heat, the girls moved as quickly as they usually do (I made sure they kept themselves hydrated), and we reached the ridge an hour and a half after leaving the car. 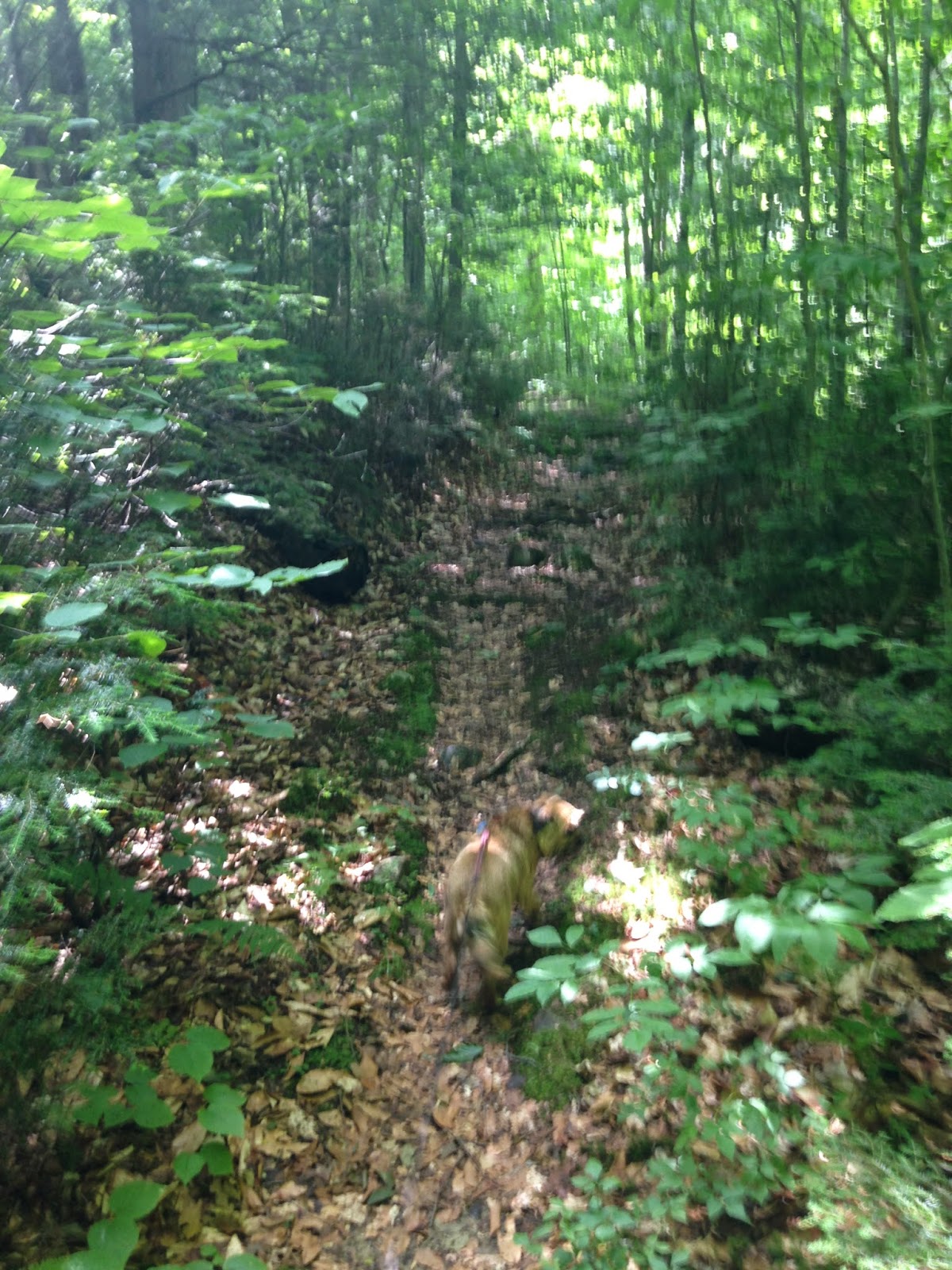 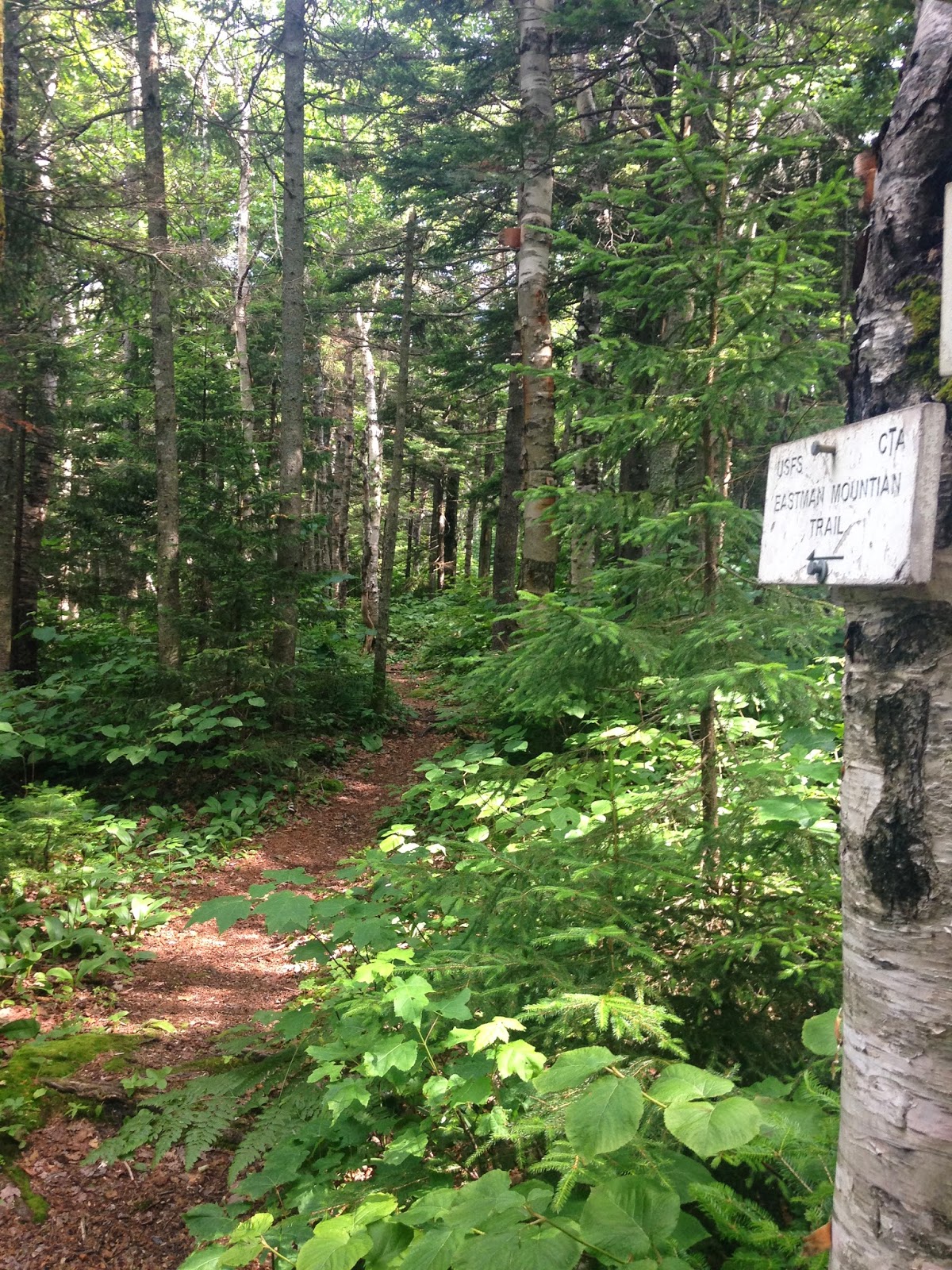 There was a lovely cool breeze at this intersection, so we stopped for a few minutes and enjoyed it.  The last stretch coming up Slippery Brook Trail had been a bit steep and crumbly, so we needed the breathing time.  When we were ready, we moved along Eastman Mountain Trail toward the summit.

This 0.8 mile trail is fairly mellow.  The first part dips down just a wee bit and is quite overgrown. 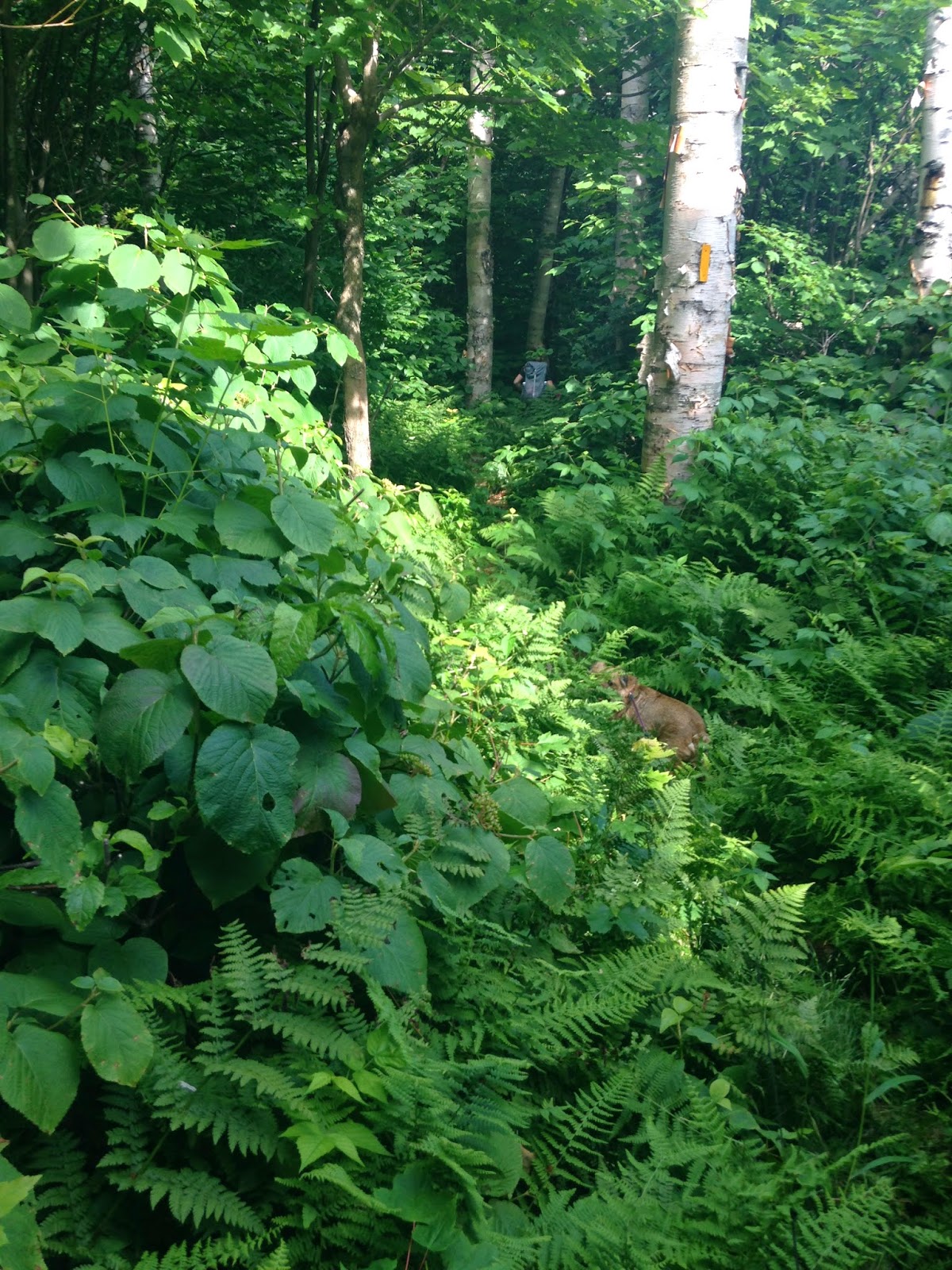 The last few tenths of a mile head up toward Eastman's summit.  It ends with a teeny bit of ledge scrambling (very minor). 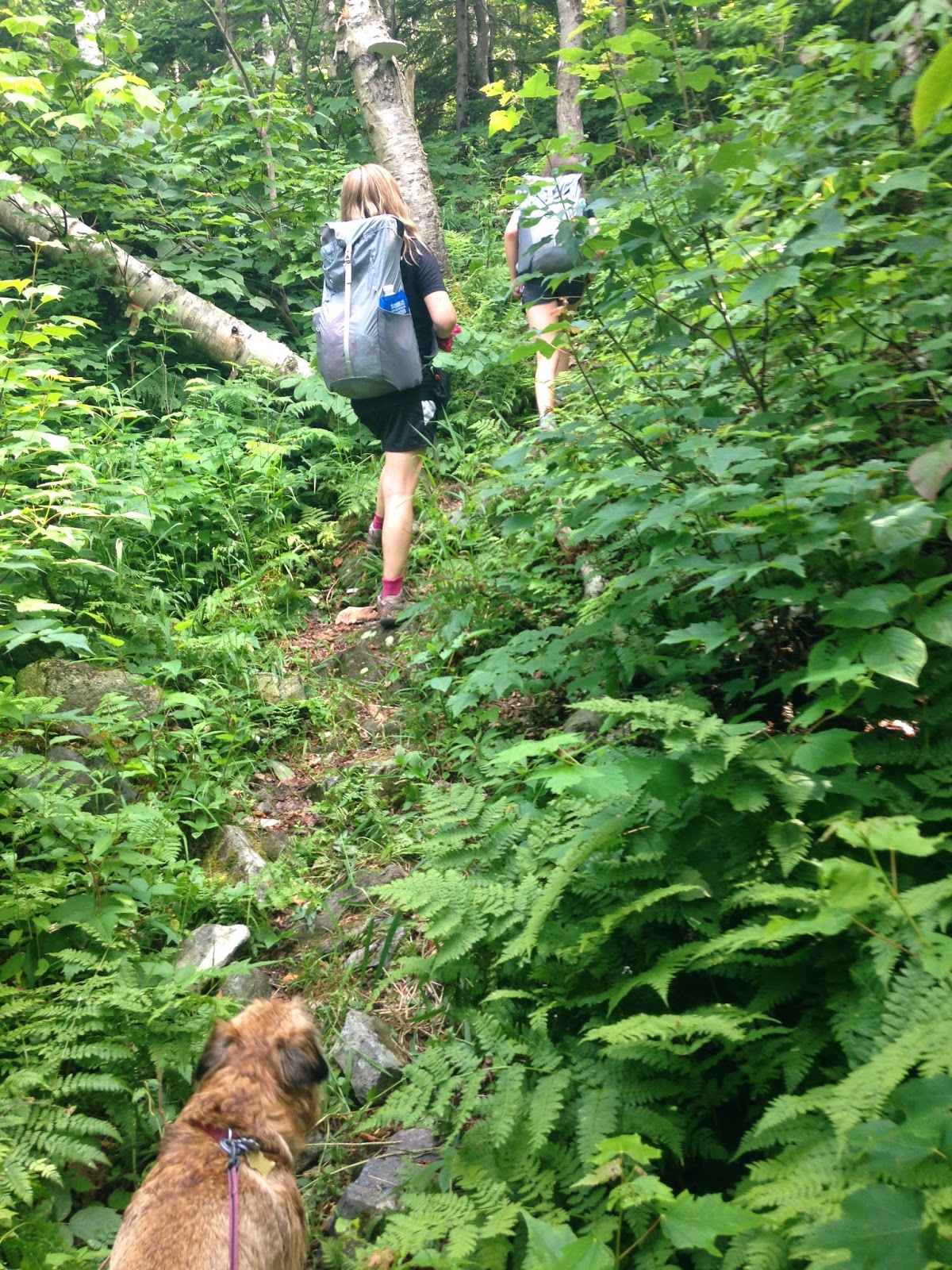 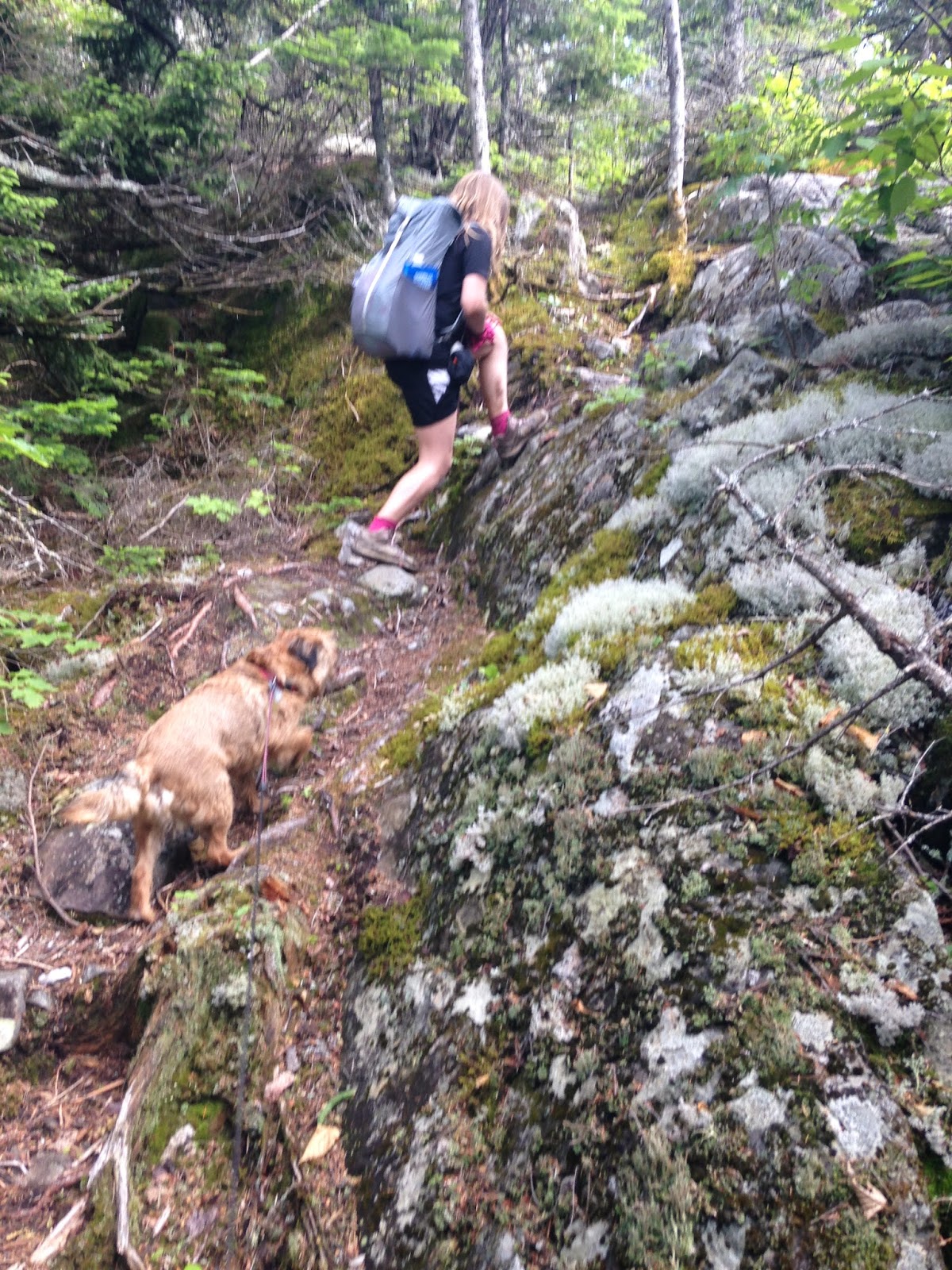 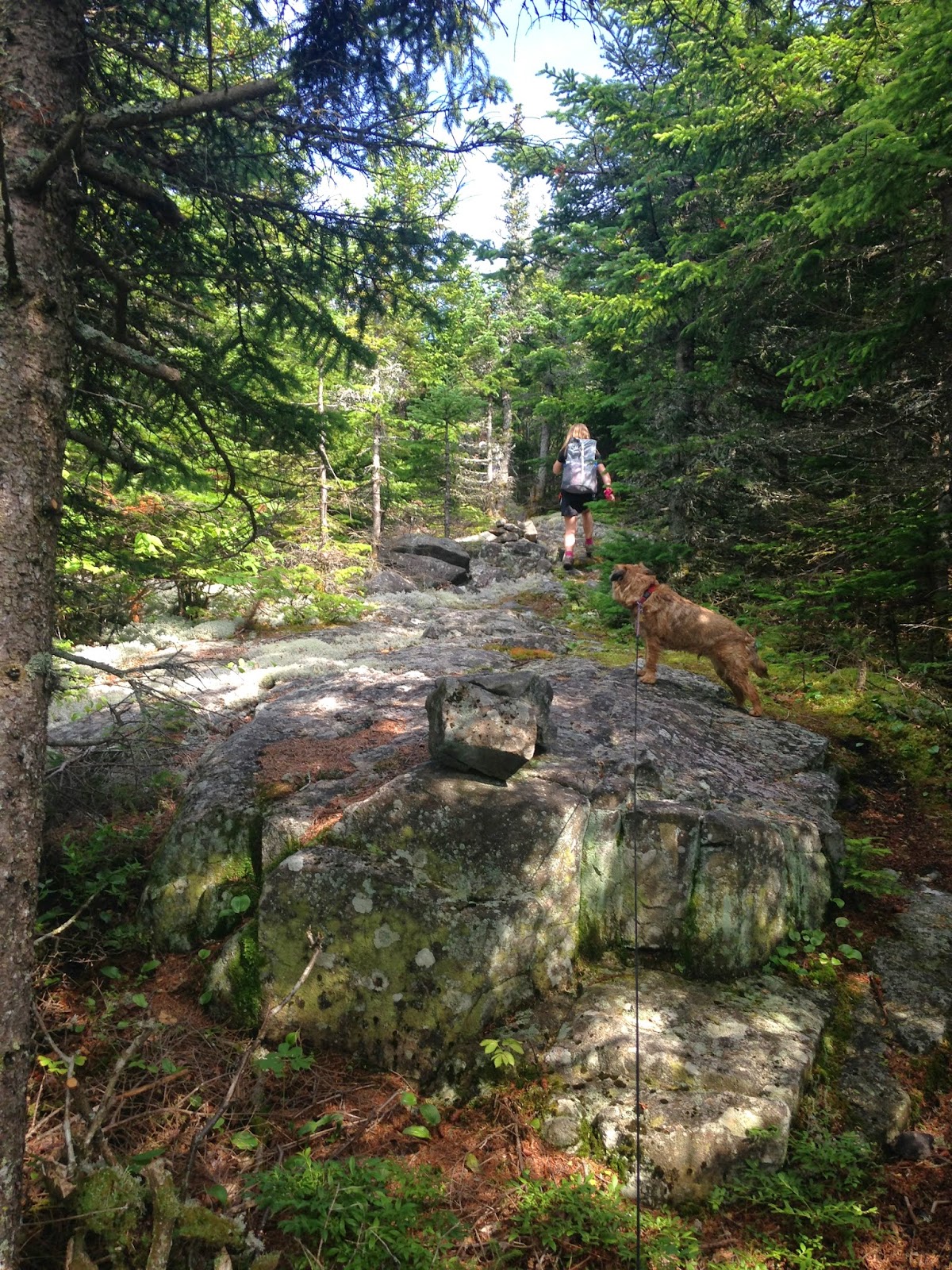 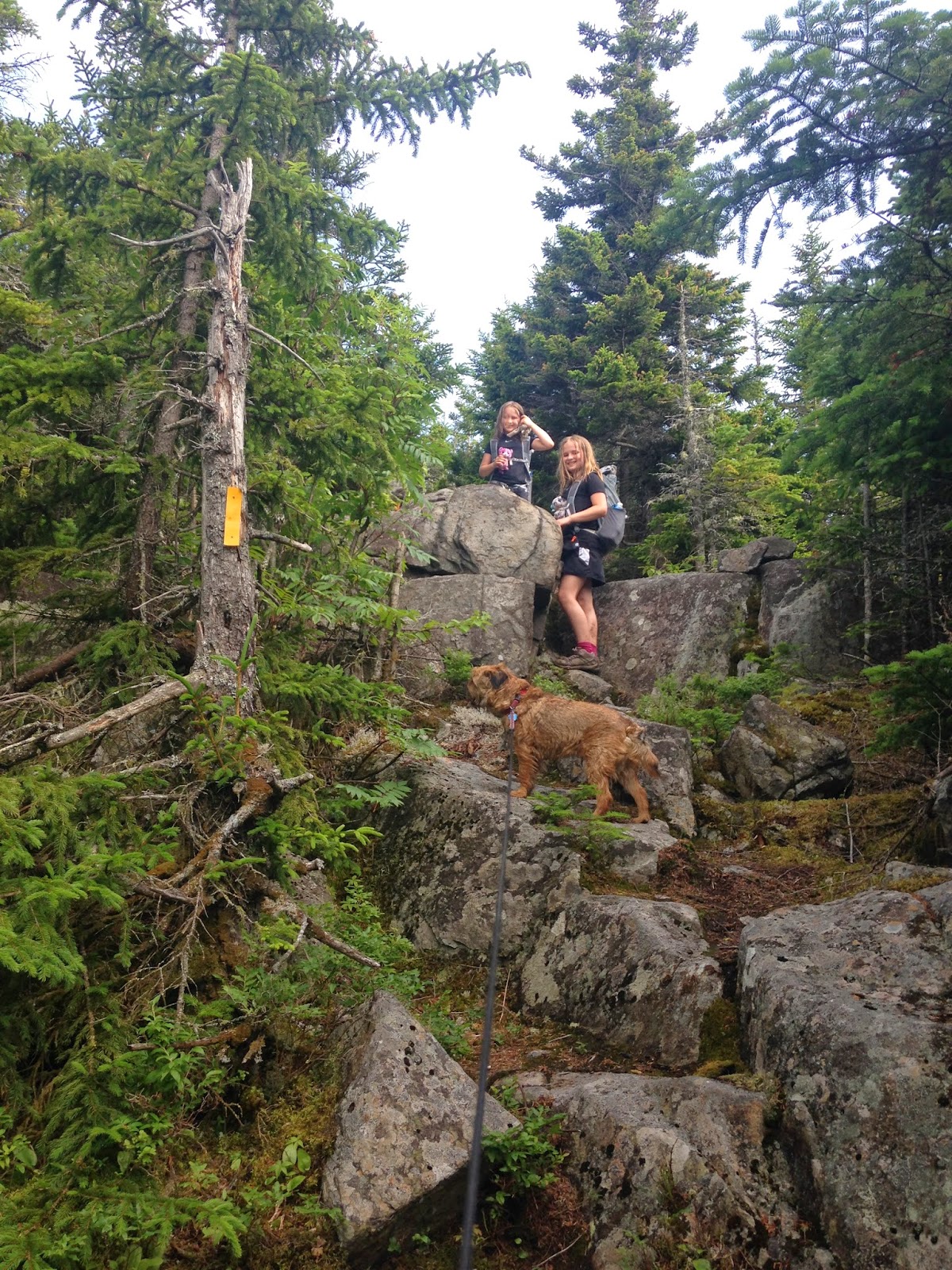 
The clouds weren't looking friendly (see above picture), so we didn't linger.  We took our photos, ate a few snacks, and went back down the trail.  The thick clouds blocked the sun and made the forest look gloomy...we had two and a half hours before sunset, but it was almost dark enough for headlamps.  We therefore did not stop at Emerald Pool on the way out.  The sun came back for a literal minute just as we reached the trailhead. 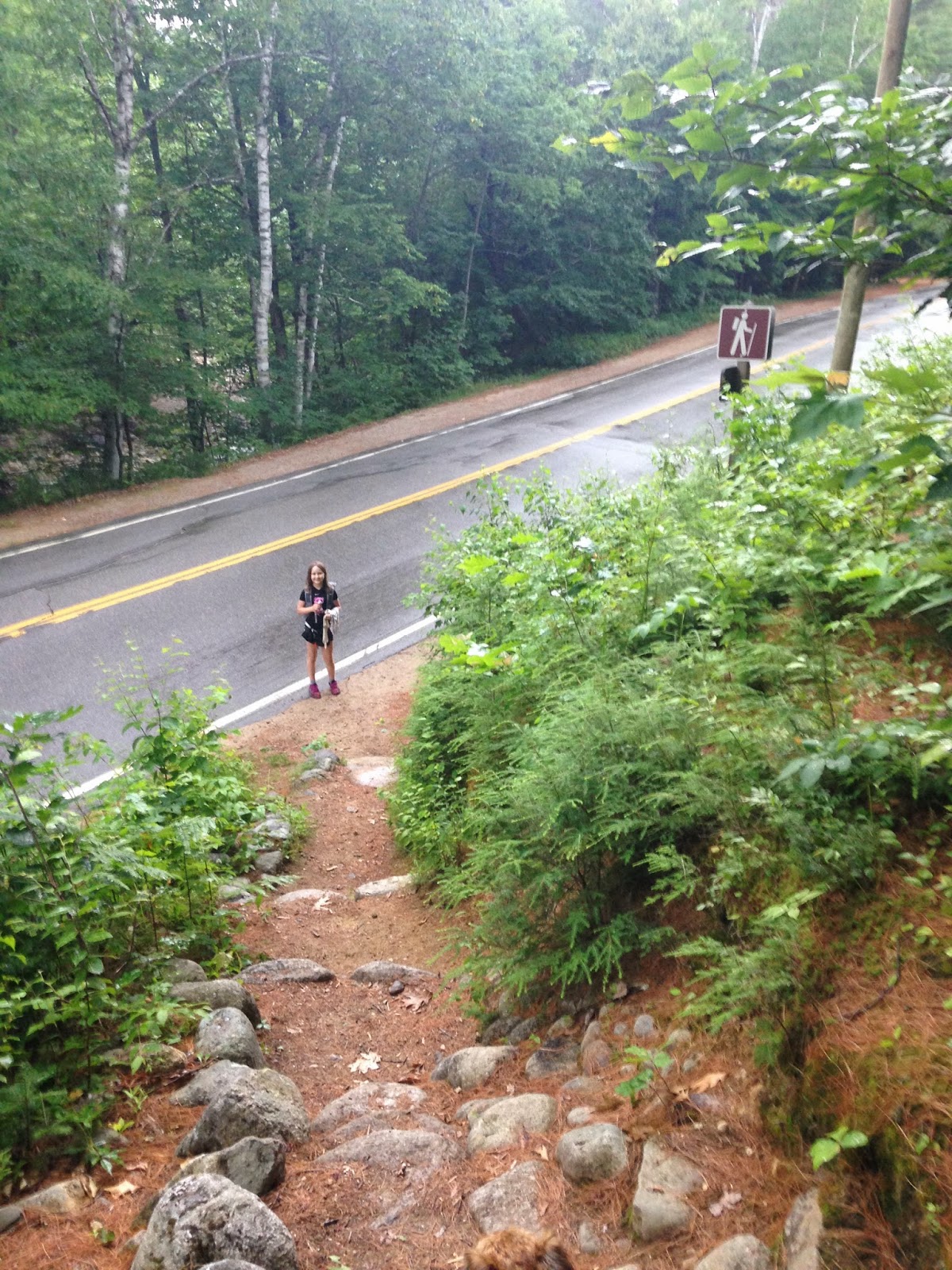 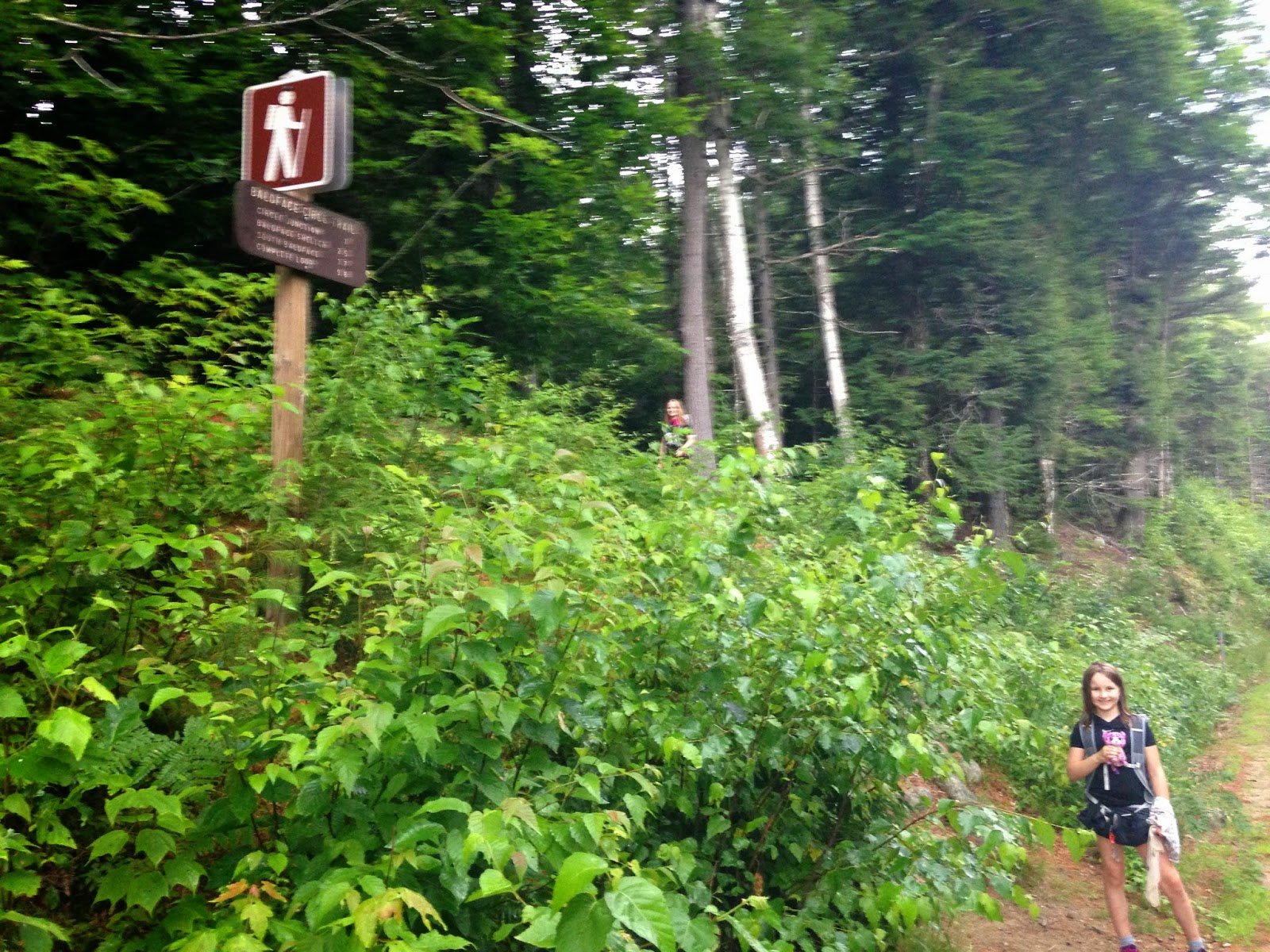 Four seconds after the above photo was taken, a dark cloud swooped overhead and dumped buckets of water all over us.  It felt wonderful.  We ran back to the car in a fit of giggles.

This was a nice hike, but it would have been nicer if we could have taken our time with it.  We were up and down in four hours flat.  We ascend quickly, and that's fine, but it's nice to sit on the summit for a while after a climb.  We couldn't do that today, and I think the girls felt a bit cheated.  They understand why I wanted to rush down, though...I don't like to see thick, dark clouds when I'm on a peak.

There will be another hike this week, as well as a trip to see our friend Samantha give a talk as part of Backpacker Magazine's Get Out More Women's Tour.  I'll give a report on both excursions before late Saturday evening.

Also, the girls and I will mail our resupply buckets to Muir Trail Ranch this weekend!  JMT time is getting closer...