I completed a simple yet supremely satisfying Thing yesterday.  I finally fixed the face of our cabinet. 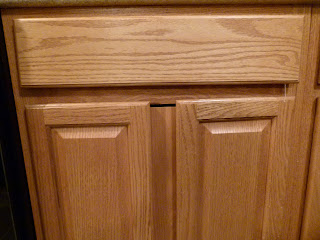 Exciting, right?  Actually, it was, in a way.  That cabinet had been broken since last year, which was frustrating because it had just been installed a few months prior to it breaking.  I didn't bother asking the contractors to replace it.  The contractors had already caused $20,000 in water and black "toxic" mold damage to my house by installing a new roof improperly.  At first they admitted fault -- in writing -- and then they said never mind and walked away without fixing anything.  Thank God for Allstate.  They took care of everything -- they paid for the clean-up of the mold and the replacement of everything that had been damaged.  They also said they would sue the contractors, since the contractors had admitted fault.  Allstate really came to the rescue.  And no, I'm not being paid by them to say that.  I'm just genuinely grateful.

The only issue that remained, for the longest time, was that cabinet drawer.

You know how you can keep putting something off, and putting something off, until life seems normal with everything just as it is?  That's what happened with the cabinet.  I no longer noticed the broken face, it was just part of the normal kitchen scenery.  Yesterday, however, I finally fixed it with superglue and a bunch of nails.  It looks fine and I think it's pretty solid.  I did manage to temporarily superglue my finger to the side of the drawer, but besides that little mishap, all went well.

Sometimes the little things in life can make or break your day.  This might sound odd, but I was quite happy with myself for finally fixing that thing.