To finish the winter list this season, Alex and I must adhere to a somewhat inflexible schedule.  Weather permitting, she and I will hike twice a month on our own and twice a month with Sage.  Sage will come with us on the less complicated and shorter trails, and she'll stay with Hugh when Alex and I take on the likes of the Bonds, the Twins, etc.

Owl's Head is a long 18 mile trek made slightly shorter by a popular bushwhack.  Though Sage could handle this in one day (indeed, she already has), she's not currently interested in doing the entire winter list and therefore has zero desire to endure this particular slog again anytime soon.  Alex and I had Sage's blessing to do this one without her.

We arrived before sunrise; I'd insisted on getting a very early start.  I knew we'd come back in headlamps no matter what time we set out, but I wanted to avoid walking the Black Pond bushwhack after dark.  If we could make it back to flat and wide Lincoln Woods Trail before having to turn on the lights, I'd be very happy.  This had more to do with my being creeped out by the thought of bushwhacking in the dark than any actual safety issues.

Our boots were on trail at 6am.  Since my camera refused to take any images before sunrise, I don't have the traditional trailhead shot.

Alex and I enjoyed walking along the Lincoln Woods Trail during predawn.  We kept our headlamps off and watched the path turn lighter and lighter shades of gray until, finally, the ice gleamed white.  Alex stated she'd like to do more sunrise-type hikes in the future; I'm sure the kid will get her wish sooner rather than later.

The sun was mostly up by the time we reached Black Pond Trail. 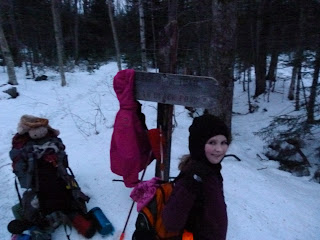 We delayered and continued on our way... 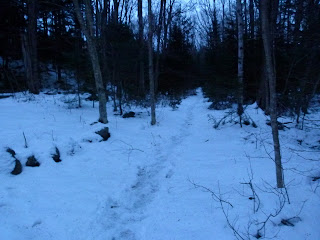 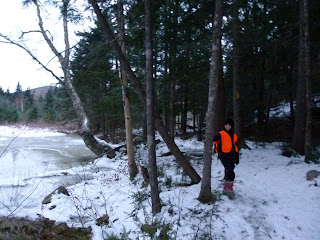 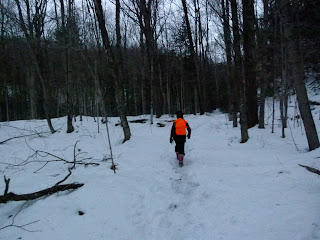 ...and took a break once we reached Black Pond.
﻿ 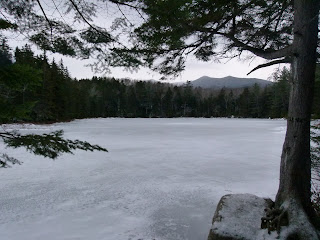 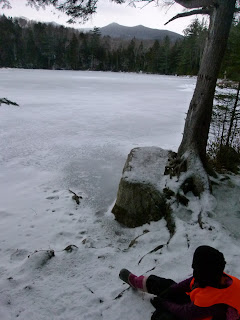 The temperatures were in the low teens, so we didn't stay still for long.

Here, Alex stands on the entrance to the bushwhack while I stand with the pond to my immediate right: 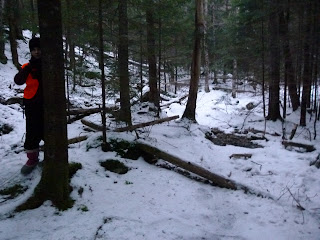 The bushwhack was incredibly easy to follow; frozen footsteps led the way.  I took compass bearings every now and then anyway, since it's never safe to assume frozen footsteps will be visible the entire day (falling snow can quickly obliterate tracks). 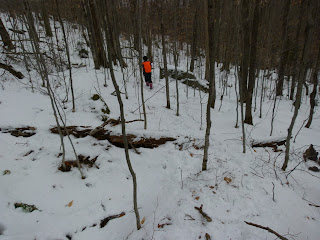 We popped out on Lincoln Brook Trail in short enough order... 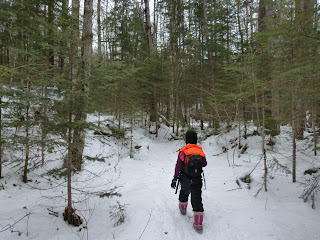 ...made our way through three partially frozen, "interesting" water crossings (test that ice before putting your full weight on it!)... 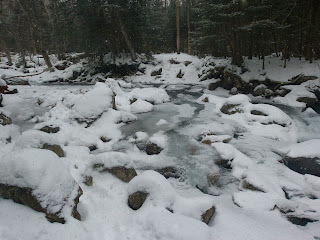 ...and arrived at the base of the Owl's Head slide. 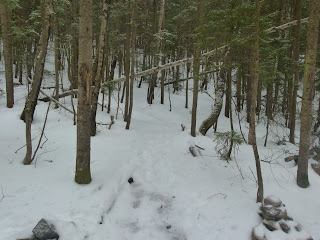 We took a break and I checked my watch.  Eight trail miles in four hours.  Not bad.

Snow began to fall -- the light, pretty kind that decorated the air around us.  We began the climb in festive spirits. 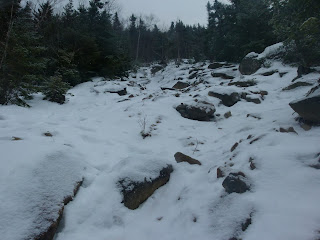 View from the slide... 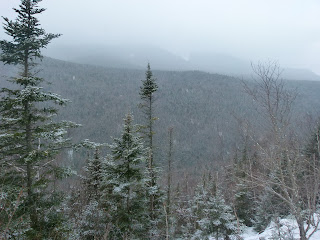 Takin' a break near some short trees.... 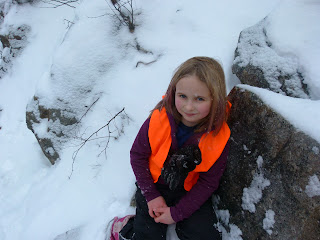 The slide was icy, but not overly so.  Still, it was slow going as I wanted to step carefully.  On the way up, I decided I did not want to descend this route, as it's much easier to navigate icy rocks going up than it is going down.

I accidentally led us off track halfway up and we climbed through some short trees adjacent to the slide before coming back out near the top.  Then came the longer-and-steeper than-I-remembered hike through the taller trees to the bump previously thought of as the summit. 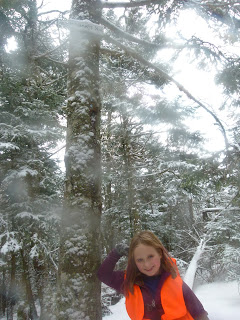 From here, we moseyed over to the bump currently known as the summit. 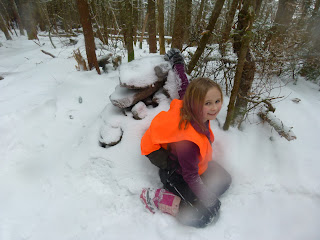 After returning to the first summit, we checked the time.  It had taken us 2 hours and 45 minutes to climb the mile-long slide/path and tag both summits.  Night would fall in about three hours...we should have enough time to get down from the summit, navigate the three water crossings, and hike through the Black Pond bushwhack before breaking out headlamps...if we focused.  It wasn't absolutely necessary to move quickly, but neither Alex nor myself relished the idea of walking through thick woods after sunset.  Yes, we're both still a little afraid of the dark.
I didn't want to descend via the slide, but I'm not familiar with the Brutus Bushwhack and didn't want to attempt it on my own.  Therefore, we followed a lone set of footsteps I had noticed earlier.  These footsteps deviated from the trail﻿ just above the slide and seemed to head southwest.  From reading others' trip reports, I knew this couldn't be the Brutus 'whack, but it wasn't the slide either, so that was good enough for me.  Alex and I followed the tracks down a steep but stable path and ended up rejoining the trail at the base of the slide.  We then checked the time (2:15) and began speed-walking the flat Lincoln Brook Trail.
The water crossings were easier the second time around, mainly because I knew where to step (still had to test the ice before fully stepping on it, though).  We made it back to the entrance of the 'whack just as the sun was starting to set.  The new snow had not obliterated the frozen footprints in the slightest (plus, I had my compass), so Alex and I plunged into the woods and raced through the 'whack until we found ourselves back on the Black Pond Trail.
We were now thrilled; in our minds, the hike was over.  All the difficult bits had been accomplished -- what was now left was an easy 3.4 mile walk to the car.  We hiked the Black Pond Trail without headlamps as the sun fully set, then we took a long break in the dark at the intersection with Lincoln Woods Trail.
The final 2.6 miles did not go as quickly as we'd have liked.  We had mentally finished this hike back at Black Pond, but of course our feet still had to take us to the parking lot.  Alex muttered more than once about how this part of the hike seemed to be taking forever, but overall she was in very good spirits.  This 17-18 mile hike was well within her capabilities; it wasn't a strain or a push, it was just right for where she's physically at.
We made it back to the car at 6pm; the hike had taken exactly 12 hours. 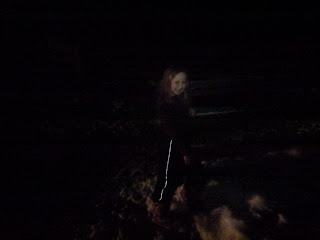 On the way through Lincoln, we called Hugh to let him know we'd be home sooner than we'd anticipated.  He and Sage whipped together a huge, delicious meal and had it on the table when Alex and I walked through the door -- amazing amazing amazing.  'Twas the perfect ending to an excellent day.
Posted by Patricia Ellis Herr, Alexandra Herr, and Sage Herr at 9:22 PM