Please join us at one of our next booksigning events:

Latest Publicity for Up:

Click here for publicity and reviews for Up thus far.


Each April, the Appalachian Mountain Club holds a ceremony in Exeter, NH honoring those who have recently finished hiking mountains on various New England lists.  Our family attended, since Sage, Alex and I were to receive certificates for hiking the White Mountain Four Thousand Footers.

Before the ceremony, we went to dinner.  The mood was festive. 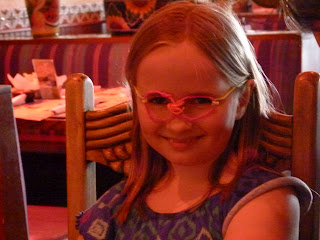 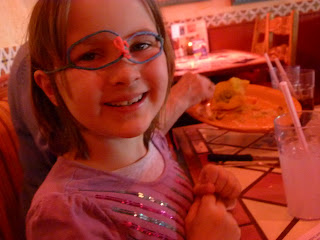 Here's my family standing in front of the school where the ceremony was held.  From left to right, back row first -- my dad, my mom, Hugh, me, Sage, and Alex. 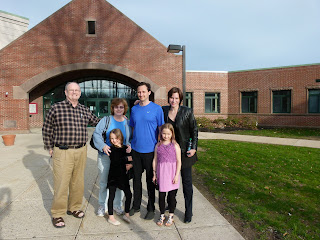 The ceremony was great fun.  One wouldn't think that watching countless individuals walk one-by-one down an aisle would be an enjoyable way to spend three hours....but my, that crowd was in good spirits.  I think the "water" being passed around had something to do with it.  Between the wine --uh, I mean, the water -- and the four rows of people blowing noisemakers, most of the adults were in fine form.  I think the kids enjoyed themselves too.

Speaking of kids -- wow!  There were eight 4K finishers under the age of ten this year (most of whom were girls)!  Way to go!  I don't know any of them, but I was SO PROUD of them -- and their parents!  Kudos, people!  Today's shout-out goes to you.  I can't post pictures since I don't have your permission (and most of my photos didn't turn out anyway) -- but if you're reading this and want to send me a picture of your kid receiving a certificate, then please do!  I'll post it here.

Sage received her certificate for hiking the all-season Four Thousand Footers.  She received a standing ovation when her name was called, and when she got down to the front of the auditorium, she was picked up and held out for the crowd to see.  Sage was overjoyed and very proud of herself.

Alex and I received certificates for hiking the Four Thousand Footers during winter.  The crowd gave Alex a standing ovation too.

Thank you, folks.  Your support has always meant a lot to us.  As a mother, I can't thank you enough for all those cheers as first Sage, then Alex walked down that aisle.

I took a ton of pictures of the girls receiving their certificates, but none of them turned out!  I'll ask others to contribute theirs and add them to this post at a later date.

Here are the girls, back at their seats -- 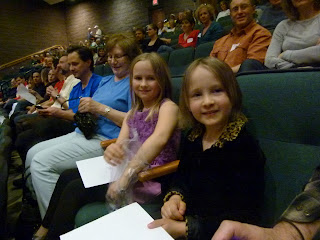 After the ceremony, holding their certificates... 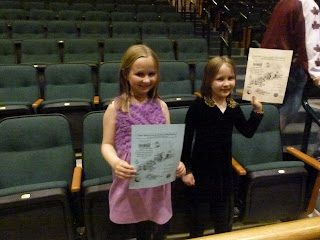 It was a wonderful evening.  The girls and I will attend again next year, and the year after that, and the year after that -- though I think we're finished receiving AMC certificates (unless Sage decides to go for the winter list).  The 4Ks have been and continue to be such an important part of our lives; we should be there to cheer others on even when we're not receiving anything ourselves.

What a great achievement! Good job, you guys!