We had planned a daring ascent of Huntington Ravine Trail, the "most difficult trail in the Whites" according to the White Mountain Guide.  Samantha Brady and I did Huntington on our own a couple of weeks ago, and I felt sure the girls could handle it -- if the slabs were dry and the weather cooperated.

Unfortunately, the weather did not cooperate at all.  The night before our planned hike, the skies dumped water all over the Presidentials (and the rest of the Whites).  Thunderstorms were predicted for Saturday itself...so our crew decided to ascend Wildcat A instead of Mt. Washington and, if the clouds looked like they might behave themselves, we'd head over and also get Wildcat D.

Our crew consisted of Samantha and her boyfriend Josh, John Myers, Jeremy Ward, the girls, and Hugh.  The morning of our hike, Samantha texted me to let me know she and Josh would not be coming after all -- they had to run their cat to the emergency vet.  The two of them would catch up with us at the after-party at the base of the Auto Road.

The rest of us met at the 19 Mile Brook Trailhead.  I had never met Jeremy before -- I knew him from Facebook and have always enjoyed his posts.  It was a pleasure getting a chance to hike with him..and, of course, it is always a joy to hike with John.

It rained all over our heads at the beginning... 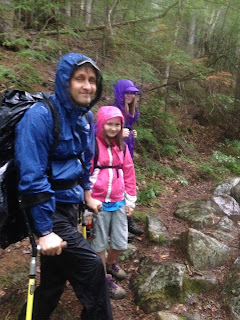 ...but we hiked on.  19 Mile Brook Trail has an easy to moderate grade throughout and the footing is decent (for the Whites).

After 1.9 miles, we took a break (at the intersection with Carter Dome Trail).  The rain had petered out by now and we were left with fairly cool, wet conditions.  I'll take that over hot and humid any day.

We then headed another 1.7 miles to Wildcat Ridge Trail.  From there, it was a steep 0.7 miles up to the summit of Wildcat A. 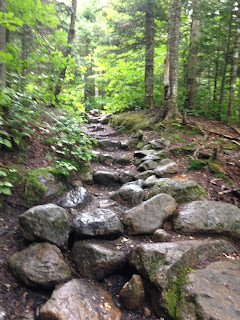 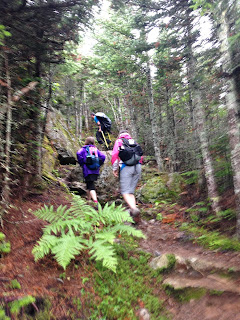 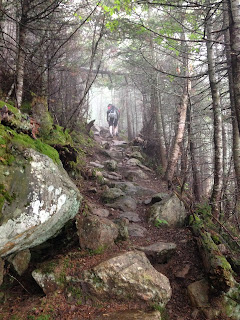 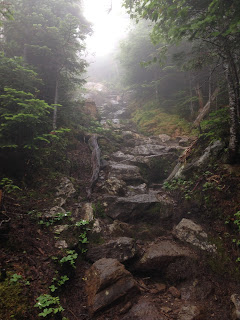 I had completely forgotten about our Desserts on the 48 quest while planning this hike; I therefore didn't have any "W" desserts with us.  Jeremy, whose last name is Ward, stepped in and offered us some of his homemade chocolate Oreo truffles.  So we did indeed have a dessert for Wildcat A - Ward's Truffles.  :)  They were soooo good!


Hugh decided to head back to the car -- the rest of us wanted to get Wildcat D (and C, for Sage's Trailwrights list).  Hugh was fine about heading back on his own, and I felt it was safe for him to do so.  19 Mile Brook Trail is well traveled, and there is an AMC hut at one end of it.  He would not be alone in his travels, even if he was not with us.  He offered to drive to the ski area and pick us up after we came down from Wildcat D, so I gave him the car key and we bade him a temporary farewell.

On we went, up and down lots of bumps and, somewhere in there, over the summits of Wildcats B and C. 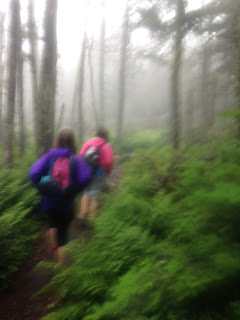 The sun began battling its way through the clouds as we sat on the summit platform.  On the way down the ski trails, we saw peeks of nearby slopes and summits. 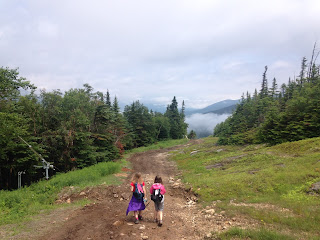 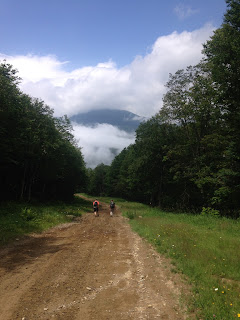 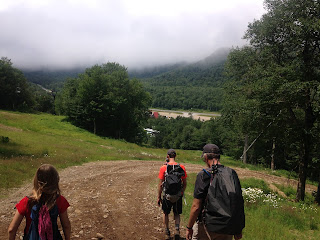 Hugh was waiting for us in the parking lot.  He had enjoyed a safe descent from Wildcat A.

Our group parted ways -- Jeremy and John took advantage of our early afternoon finish and headed home, while Hugh, the girls, and I went to Seek the Peak's after party and met up with Samantha and Jeremy.

Congratulations to everyone who participated in Seek the Peak -- over $230,000 was raised for the Observatory.  Here's the link to Mt. Washington OBS's report.
Posted by Patricia Ellis Herr, Alexandra Herr, and Sage Herr at 6:34 AM

Thank you very much for your kind and objective appraisal for the Chinese people. I believe Chinese people will get better and improve ourselves to integrate the international world. Welcome to visit China again in the future. There are more famous mountains in China, such as the Five mountains (five famous mountains with spectacular scenery and traditional Chinese culture), Mount Emei, Mount Huang, Himalaya, and so on.