We have moved into our new place, and now I'm hoping our old house sells quickly.  Cross your fingers for me!

The girls and I managed to get in two hikes last week.  We will get in two hikes this coming week as well...we are training for what I hope will be an interesting trekking experience.  I'll write all about this experience once we return to the USA in July.  We leave for this adventure in a week and a half.

Here's our trip report for the first of last week's hikes -- we went up Caps Ridge Trail to Mt. Jefferson, then we took Gulfside to Mt. Clay Loop, then Sage and I went over Clay while Hugh and Alex went around it, then we met on the flank of Mt. Washington and headed over to Monroe.  We eventually came down Ammonoosuc Trail.  It was a long day -- about 10.7 miles with around 3800 feet of elevation gain.  Hugh came with us to train a bit for our upcoming trip.

Caps Ridge Trail (on our Terrifying 25 List) is great fun.  It starts as a moderate walk in the woods and ends as a mile-long rock scramble and rock hop.  The scrambles take you over three rocky outcroppings known as The Caps. 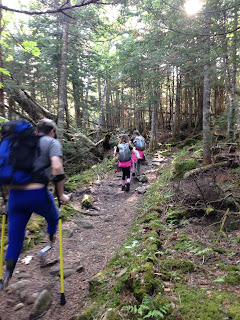 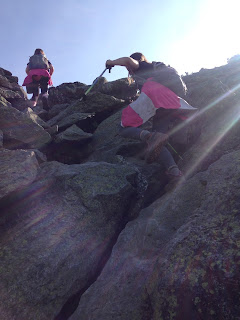 The third cap is mellower than the previous two.  After you've climbed it, you have a bit of rock-hopping to do,..then you reach this sign -- 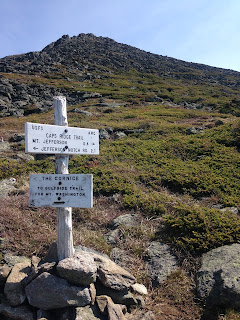 Over the pile of rocks you go...there are nice views to be had as you climb... 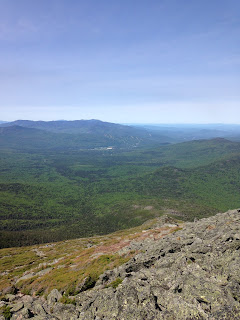 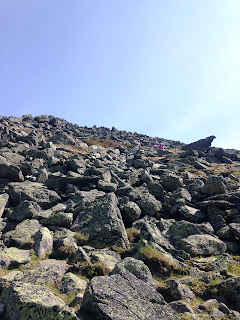 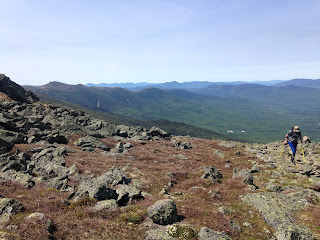 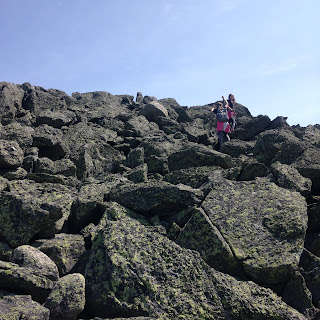 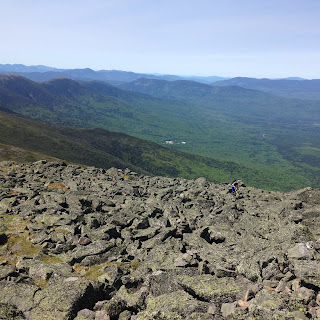 Summit!  We had Jujufruits on Jefferson (Desserts on the 48!). 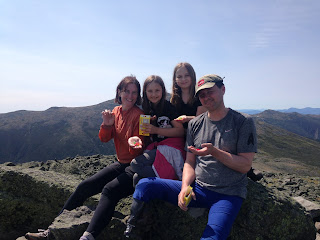 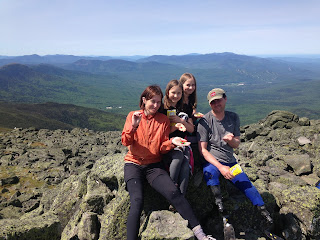 The day was clear and gorgeous -- plenty to see up there!

Hugh took some time to dry out his legs (he needs to take them off from time to time as we hike) while the girls ate their candy.  Eventually, we began the trek over to Clay. 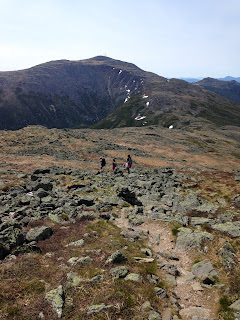 Alex already had Clay for Trailwrights, but Sage still needed the peak for that list, so she and I went up and over the Mt. Clay Loop while Hugh and Alex continued around Clay on Gulfside,

There are two bumps on Clay's summit...I'm not sure which is the highest point, so we got photos on each. 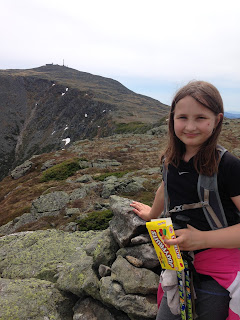 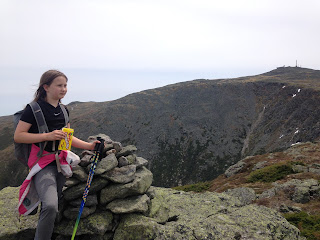 After reuniting with Alex and Hugh on the other side of Clay, we continued around the summit of Washington on Gulfside Trail toward Mt. Monroe. 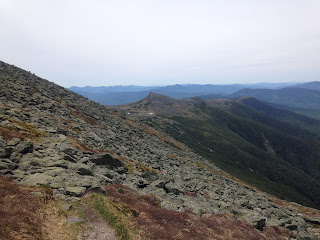 The girls and I scampered up Monroe while Hugh took a break at the hut.

After everyone felt rested enough for the descent, we headed down Ammonoosuc Trail.  We could see Caps Ridge Trail, the way we had ascended that morning, in the distance -- it is the farthest ridge heading up Jefferson in the photo below. 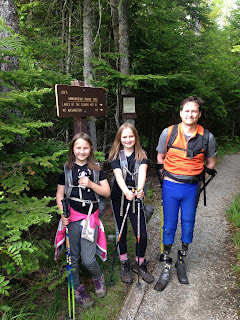 We were lucky to have such a bluebird day -- the Presidentials are usually foggy, windy, and generally "interesting" weather-wise.

It was nice to meet so many happy and kind people on the trails today -- hello out there to Steven George -- it was a pleasure seeing you on Jefferson!

Happy hiking, everyone.
Posted by Patricia Ellis Herr, Alexandra Herr, and Sage Herr at 6:19 AM