Sunday's weather called for warm temperatures, no wind, and a slight chance of thunderstorms.  No one in our party had hiked up a northern Presi in quite a while, so we decided to go for "Madams and JQ."  I wanted to get JQ for Sage, since she only has a dozen or so Trailwrights 72 peaks left.  She's already done all the hard ones with Alex and me...all she has left are a bunch that are right next to the usual 4Ks.  She may as well get those while we're doing rounds of the 48.

John and Samantha came with us again today.  We are all early birds, so we were each at Appalachia a full forty minutes before our agreed-upon meeting time.  Alex and Sage were a bit disappointed, since they wanted more time to sleep in the car, but they quickly cleared their cobwebs and we began our hike.


The trail was nice and dry for the first mile and a half or so... 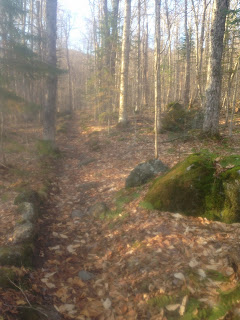 ...then we dealt with snow.  For the most part, the snow was packed to the point where we didn't sink at all.  We didn't even need microspikes for this bit. 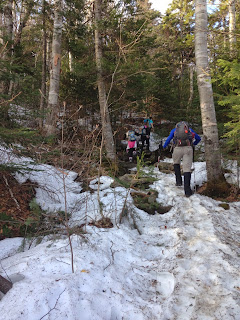 When we arrived at the intersection with Watson Path, a light bulb went on in my head.  I hadn't yet hiked Watson Path, and it leads straight to the summit of Madison.  Why not take Watson Path straight to Madison instead of doing the same old, boring (to me) Valley Way to the hut?  I asked everyone if they would mind ascending via Watson Path and, after I walked on the snow a bit to test its firmness (it held, for the most part), John, Samantha, and Sage graciously agreed to indulge my wish for a new-to-me trail.  Alex preferred to stick with Valley Way, but she was outvoted. 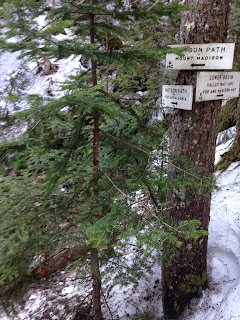 Watson Path visits Bruin Rock (which we found run-of-the-mill) before heading down to a water crossing.  The banks are steep on both sides, but we figured it out. After you cross the water, all that's left is to go straight up for about 1.3 miles.  It's like doing the stairmaster portion of Tecumseh, only longer and with a handful of tenths above treeline. 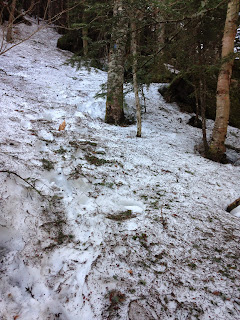 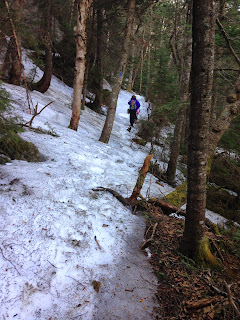 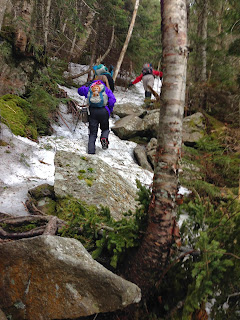 I have to thank the person who did this trail a few days before we arrived.  That person left footprints in the snow which had hardened.  We used those footprints like carved steps or ladder rungs -- they were quite helpful on all those steep slopes. 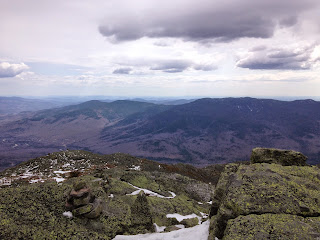 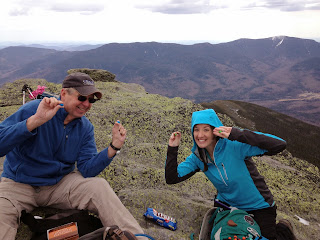 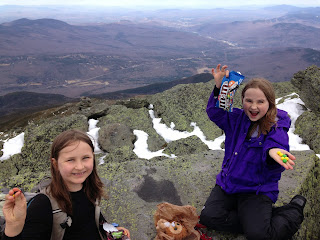 We ate a while, enjoying the M&Ms, some cheese, some yummy cookies John had brought, and a bunch of other miscellaneous edibles.  When we felt ready, we descended toward the (closed for the season) hut.


While descending, I took the time to show the girls how close Ms. Matrosova had been to treeline when she perished.  An extremely experienced mountaineer, Kate Matrosova died in terrain the girls and I know well.  We have hiked these peaks multiple times...but never in the harsh conditions Matrosova experienced that fateful day last February.  I pointed out the approximate place where Ms. Matrosova died, not to act like some inappropriate tragedy tourist, but to emphasize how difficult it is to hike even a few tenths of a mile to safety when one is fighting 80+ mph winds and subzero temperatures.  I want my daughters to always respect the power of nature, and to understand just how careful they always must be.

A dark cloud drifted our way and threw rain on us as we arrived at the hut.  We sat on the rocks and donned our rain gear.  Of course, as soon as we finished putting everything on, the cloud drifted away and the sun shone again.

From here, it was a 0.4 mile hike up to the intersection with Airline. 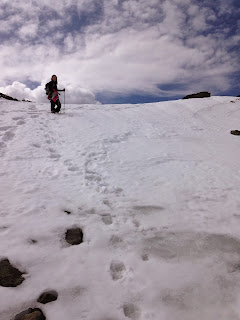 On Airline, we curved around JQ and headed up...when we felt like the trail had ascended high enough, Sage, Samantha, and I rockwhacked a tenth of a mile or so to JQ Adam's summit.  Alex and John waited for us on Airline. 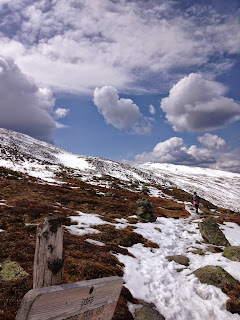 We whacked back down and, once we were all reunited, I started peppering Samantha with cloud questions.  The sky looked ominous here and there, and I wasn't sure if the clouds were thunder clouds or just good-old-fashioned rainclouds.  Samantha is not a meteorologist, but she's been working and volunteering for the Mt. Washington Observatory for at least a couple of years.  She knows more about thunderclouds than I do, so I relied on her judgment on whether or not we should continue.  At this point, we were only a few tenths of a mile from Adam's summit, but still...better to bail if a boomer threatens.  Samantha felt we'd be fine, though, so on we went.  I appreciated her patience...I kept asking, every few seconds, "What do you think about those clouds NOW?  How 'bout NOW?"  Etc.

Samantha had brought Apple Strudel for Adams (Desserts on the 48!). 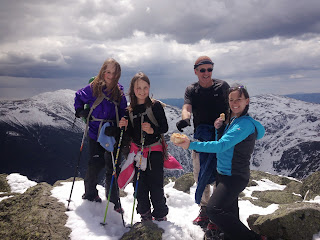 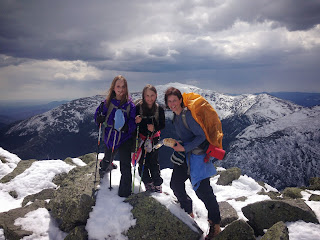 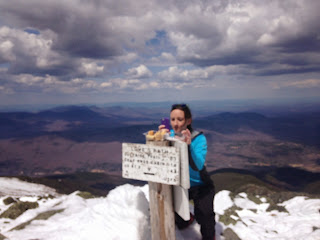 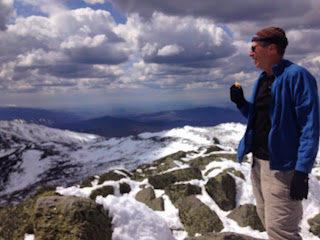 I had brought Apple Pie. 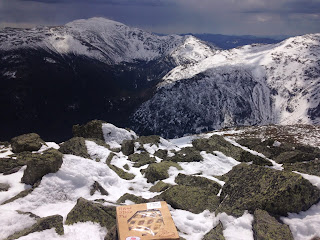 We ate, we talked, Samantha did a headstand...

We descended in fine spirits.


Before descending Valley Way, we stopped by the hut to rest, hang out, and take a group portrait.

Descending Valley Way was onerous.  The upper portion consisted of a narrow, but slanted, monorail.  We tried butt-sliding, but we kept flying off sideways into the woods.  Walking was difficult -- we did not posthole (walking that narrow rail on snowshoes would have been torture!), but we did have to lean sideways...the whole thing was a tilted balance beam.  A mile or so down, life got easier, but by then we were all so tired from the day that we didn't say too much for the rest of the hike.  Even the girls were uncharacteristically quiet.  I didn't realize until I got home that we had done 5150 feet of elevation gain...no wonder we were all kaput!

Visions of burgers and milkshakes were dancing in my head by the time we reached Appalachia.

The girls and I bid farewell to two of our favorite hiking people, then we drove home.

'Twas another good, albeit strenuous, day in the woods.

We'll hike again a day or two after Mother's Day.  Happy trails, everyone.