Don't forget, we need your support for Sisters Hiking for Equality!  Please donate, and "like" the girls' Facebook Page.

Alex has both solo hiked her first 4K and finished Tecumseh for the Grid!  Well done, kiddo.  Her trip report is here.

Sage and I hiked Tecumseh that same day, but we kept at least half a mile behind Alex so she could have her solo experience.  We had ways of communicating with Alex during the hike, and Alex had a way of keeping herself safe when she finished the hike and was waiting for us.  All went well, and this is likely the first of many solo hikes for Alex.

Both Alex and Sage are capable hikers; Sage may begin hiking solo too, after she turns 13 (13 is the age of many new privileges in our family).  Still, watching Alex disappear into the Tecumseh woods by herself was an emotional experience for me.  I was not afraid for her -- the girl knows what she's doing -- but I couldn't help thinking of the first time she ascended Mt. Tecumseh.  We didn't know it at the time, but that first ascent was the beginning of a certain way of life for all three of us.  It was the beginning of a journey that led to the publication of my memoir, UP: A Mother and Daughter's Peakbagging Adventure.  It eventually led to our highpointing adventures.  It was the beginning of our itch to hike not just in NH, but in different parts of the country and the globe, and it is responsible for the fundraisers past and present my daughters have run in order to raise thousands of dollars for girls and women worldwide.

We owe a lot to Mt. Tecumseh.

On with the hike.

Sage and I watched Alex go... 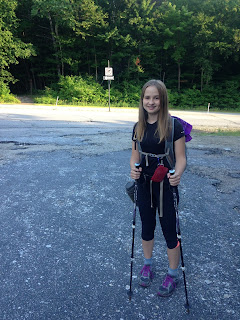 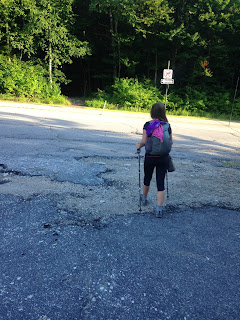 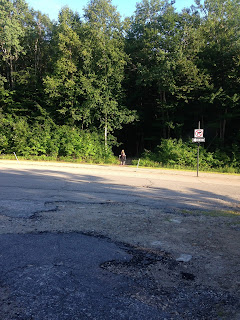 ...then, fifteen minutes later, we began our own ascent. 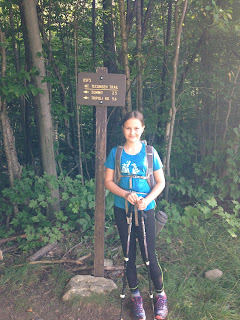 The drought in NH is obvious...where's the water that usually fills this creek bed? 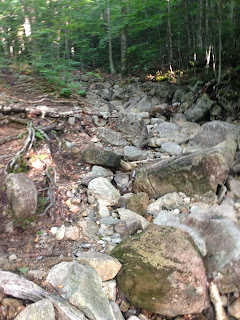 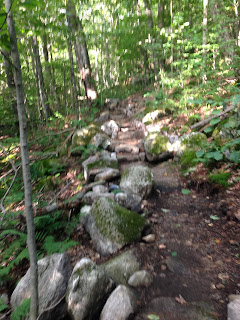 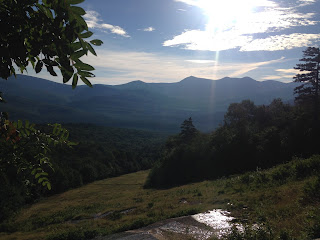 Up the "stairmaster" section... 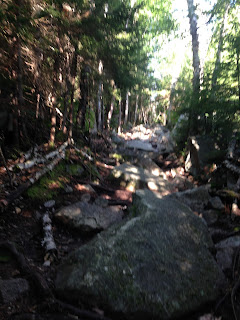 The "stairmaster" section is now actually full of stone steps.  Eight years ago, when we first hiked this trail, there were no stone steps that we can remember.  The caretaker(s) of this trail has/have been slowly filling the path with stone stairs over the past several years.  The girls and I later joked that it seems the steps will eventually stretch all the way from the road to the summit. 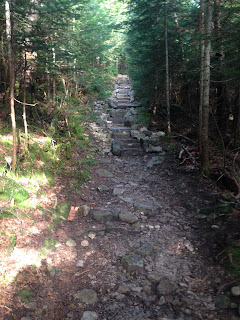 Up on the ridge, after the stairmaster section... 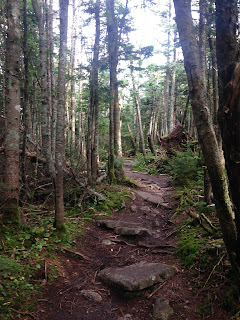 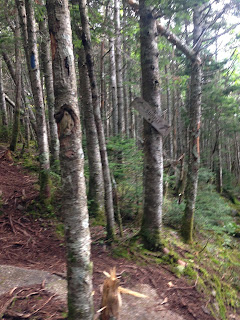 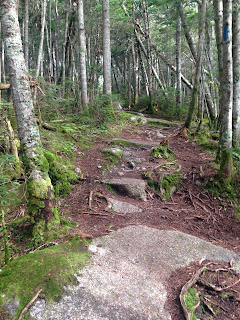 We reached the summit and there was Alex.  She was finishing up her fifteen minute break up top; I snapped a few photos of the view, and then I got a picture of her and Sage. 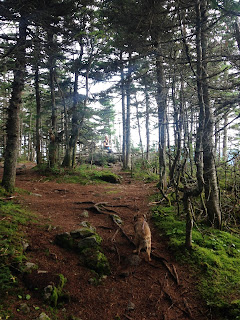 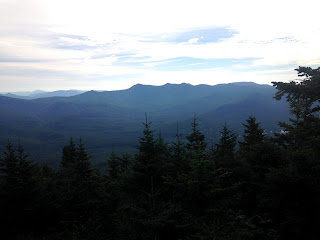 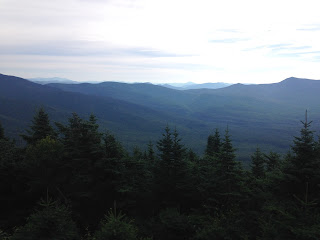 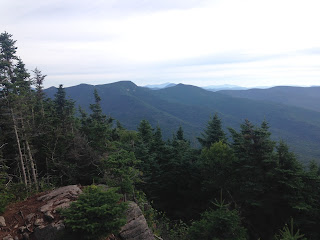 They were trying not to become blinded by the sun, hence their squinty expressions. 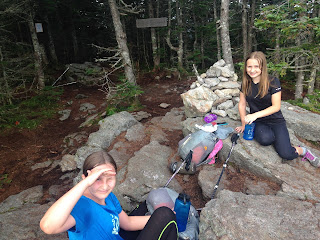 Alex finished her sandwich and began her descent.  Sage and I hung about and ate for a while, then, after fifteen minutes or so, we headed down.

Alex reached the viewpoint in what seemed like two seconds (she texted me).  Sage and I had barely begun going down the stairmaster section.  By the time we reached the viewpoint, Alex had finished her hike.  It was interesting to see how quickly she descended using her own speed, without having to stop and wait for me.  She was fast...I think she got down in less than forty minutes.

By the way, it may seem like Alex is getting most of the focus these days.  That's inaccurate, but I can see how one might get that impression.  Alex has a blog and a voice online now because of her age.  When Sage turns 13, she'll also have her own blog and her own independent voice.  We need to follow all the social media rules, so since the girls are two years apart, it means Alex gets a two year head-start on blogging and social media.  Sage understands and doesn't mind.

We'll hike again on Sunday or Monday.  No solo peaks for Alex this time around, since we'll be doing a set of mountains we've only done a couple of times before.

I can completely understand this being an emotional experience. It's a huge benchmark...one door closes, another opens kind of thing. Not to say you guys won't hike together anymore, as you will...a lot! But she can now say she can do it herself (similarly, Lylah starts kindergarten next Monday and I get teary eyed just thinking about waiting out for the school bus).

I think the way you chose to do this was a great idea, hiking with a 30 minute offset. I figured you did something clever like this when you posted it on FB and was curious.

Congrats to Alex for another milestone and accomplishment!

We have various strategies and ways to keep a safety net in place for Alex as she hikes solo. It will never be a case of me dropping her off at a trailhead and then heading out for beer while she's on the mountain. ;) We have various communications systems and, probably always, me or others will be on or around the mountain somewhere.

I'm not worried about her taking the wrong turn, or wildlife, or weather (since we don't go on bad days, and she knows how to care for herself if the weather unexpectedly turns sour). Alex knows what she's doing on the trail, and she knows how to handle herself. She also knows what to do if she accidentally finds herself off trail. The only thing I worry about is other people. The most dangerous part of solo hiking for her, or for anyone, is when she's close to the trailhead. We have various systems in place to keep her safe in those situations, too.

Of course, no system is perfect, and we are in no way overconfident, but I still feel her hiking solo is far less dangerous than her riding in a car to go anywhere, statistically speaking. :)

Thanks for your comment and support, and happy hiking!
Trish