First -- This may be my last trip report for a while.  Alex is now thirteen, which means she is ready to start her own hiking blog.  She will take over the trip reports from now on.  When Sage turns thirteen, they can both post trip reports, each on their own blog.  Alex is old enough to have her own voice on the internet and, in a couple of years, Sage will be old enough too.  I will moderate comments and oversee things to make sure all is running smoothly.  I'm sure I will still post right here on my own blog on a monthly basis, as I enjoy writing on this blog and I don't want to fall off the face of the internet completely.  I love all the comments and messages I receive, and I appreciate the time you folks take to reach out and share your experiences and support.  I'm not pulling back because I want to stop blogging.  I'm pulling back because it's time to allow my kids to have their own blog voices/identities.  Now folks can read about our hikes through the eyes of my daughters, who have been hiking for so long that neither of them can remember a time when they didn't hike.

Second -- We have another, very long-term fund raiser to announce.  It will be a gentle fundraiser (no continually bothering you good folks for money).  We now have a nice history of giving back in a way that comes naturally to us; we want to continue doing that indefinitely.  I'll post more details on that later.  Or, perhaps, Alex will.

I'll likely post the reports regarding our thru-hikes.  The main reports for our NH hiking, however, will now be handled by Alex, and then, in a couple of years, by both Alex and Sage.

Though Sage has been ascending 4Ks in the winter since 2010, she has never been in any hurry to finish the winter 4K list.  She likes to hike whatever mountain she feels like hiking, regardless of whether or not she's ascended that peak four or five times already.  As a consequence, she's hiked Cannon, Tecumseh, Moosilauke, Jackson, Pierce, and the Hancocks multiple times during calendar winters.  She has yet to visit quite a few of the other 4Ks during winter, though.  This year, since we're doing the Grid anyway, I asked Sage if she wanted us to prioritize the winter peaks she "needs."  She said she honestly didn't care, that she was fine repeating favorites and she was fine doing new winter peaks.  I think we're going to go ahead and put the ones Sage needs first -- may as well.  We need them anyway for the Grid.  She'll therefore likely finish her winter 4Ks either at the very end of this winter or soon after next winter begins.

Waumbek was one of the ones Sage needed.  We chose it for our first hike of 2016 and hit the trail around 7:20am on January 3. 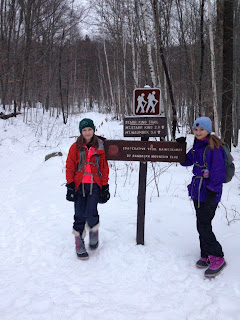 The lack of snow for this time of year worked to our advantage.  Normally, one must park the car down the road from the trailhead during the winter, as the plows don't go all the way to the summer parking lot.  There was so little snow last week, however, that we were able to drive all the way up.  The lack of snow also allowed us to ascend and descend the peak without any form of traction whatsoever.  There was snow cover the entire way, but it was never deep or slick enough to warrant microspikes or snowshoes. 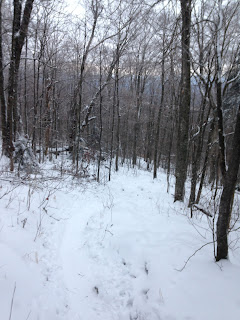 We ascended through beautiful, snow-covered forest. 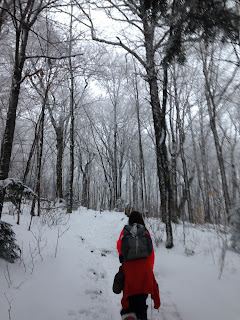 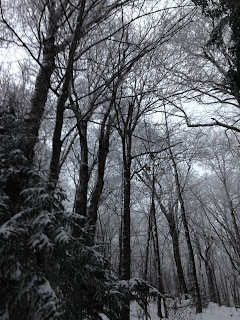 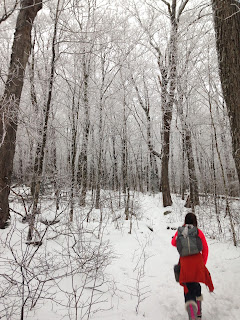 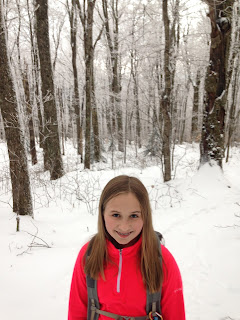 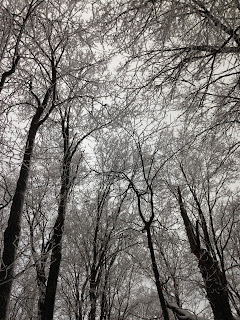 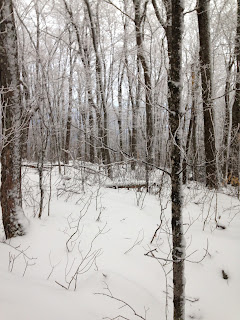 Sage paused at one point to make a smiley-face. 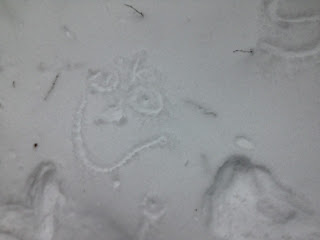 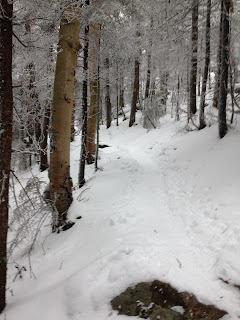 The ascent to Starr King is moderate the entire way.  We were at the chimney before we knew it. 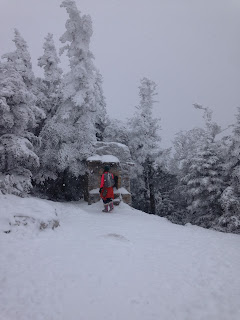 Our view was Cloud, and we experienced some lovely, fluffy precipitation. 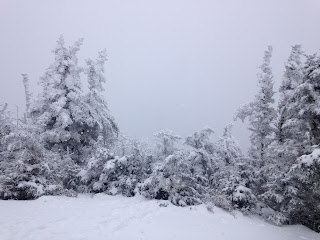 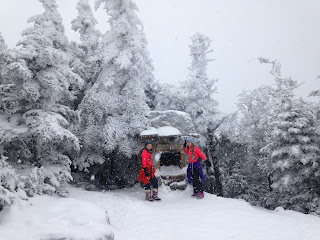 After chugging some light eggnog, we continued toward Waumbek. 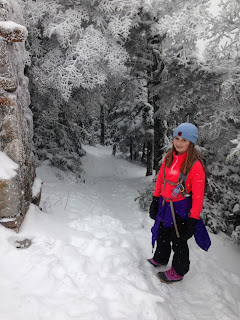 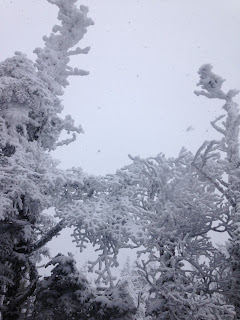 The walk between Starr King and Waumbek is so lovely! 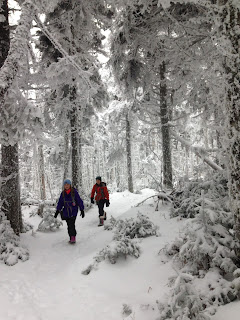 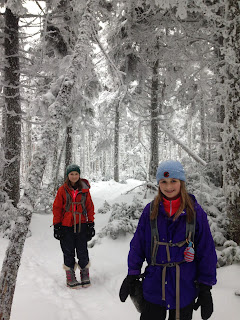 A hop, skip, and a jump later, we were at Waumbek's viewless summit. 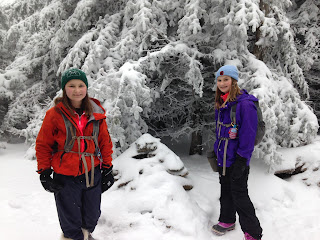 There is usually a nice view from a spot just a tad farther along the trail...but alas, all we got was Cloud. 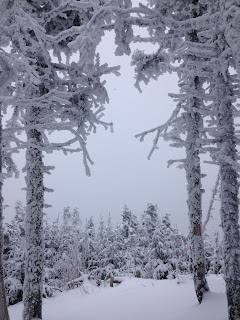 We returned to the summit and ate Wensleydale Cheese (Cheese on the 48) and Warheads (Desserts on the 48). 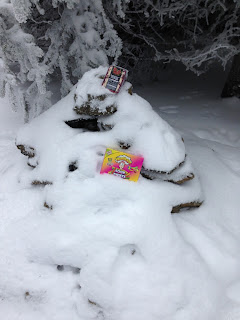 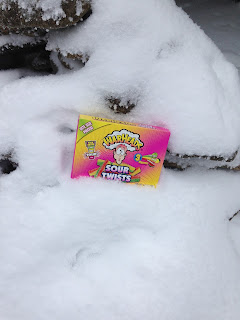 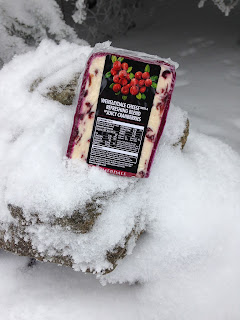 The cheese was SO GOOD!  My favorite thus far.  Yummy! 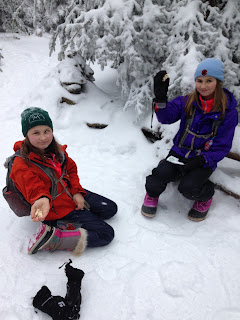 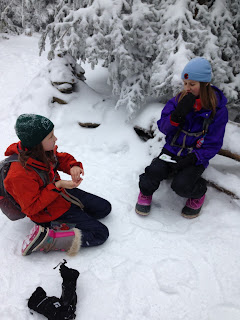 The Warheads were...well, what you'd expect from run-of-the-mill candy.  Not our best dessert, but my options were limited.  We've gone through a bunch of other W desserts with the other peaks. 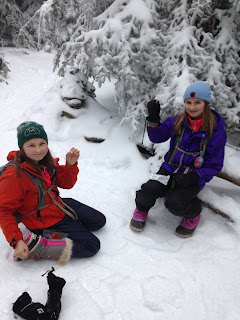 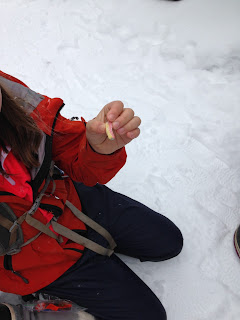 We stayed long enough to eat a small sample of the cheese and the Warheads, then we had to get moving.  That's the only problem with winter hiking -- stop for too long and you become chilled.

When we got back to the summit of Starr King, Alex took this selfie. 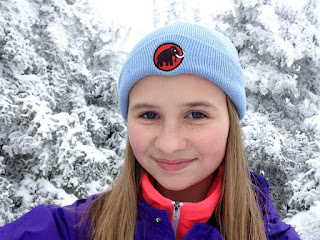 Down, down, down we went.  We had the ascent to ourselves, but we counted eleven people and one dog as we made our way back to the car.  All the people (and the dog) were cheerful...most hikers are when they're out on the trails.  A special hello to Robyn and Mina, two ladies I met, each hiking solo.  It was nice to meet both of you, and I hope we run into you again out there.

About half a mile from the car, Alex noticed what she thought were two perfect snowflakes in my hair.  She asked to take a photo -- here's the image. 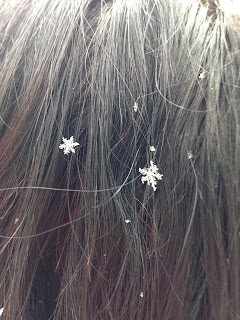 So...that's it.  I am sure I will return and write up something every month...I would miss this too much if I didn't.  However, the meat of the hikes will now be described by Alex (and, later, Sage).  I look forward to watching as both my girls' online voices grow and evolve over the years.

Peace, and see you out there.
--Trish
Posted by Patricia Ellis Herr, Alexandra Herr, and Sage Herr at 10:39 PM