Wafers on Whiteface and Pound Cake on Passaconaway. April 19, 2015

The girls and I were fortunate to hike with both John and Samantha for this one -- together, we made a fun team.

The day began on relatively snow-free ground.  The snow stayed scarce for 1.4 miles, all the way up to the intersection with Cutoff Trail.  This part of the hike was the only easy bit of the day...

From here, it was a soft-ish, moderately steep slog to the ledges near Whiteface's summit.  The snow was firm enough to hold us if we kept to the monorail, so we walked the balance beam and kept our snowshoes on our packs. 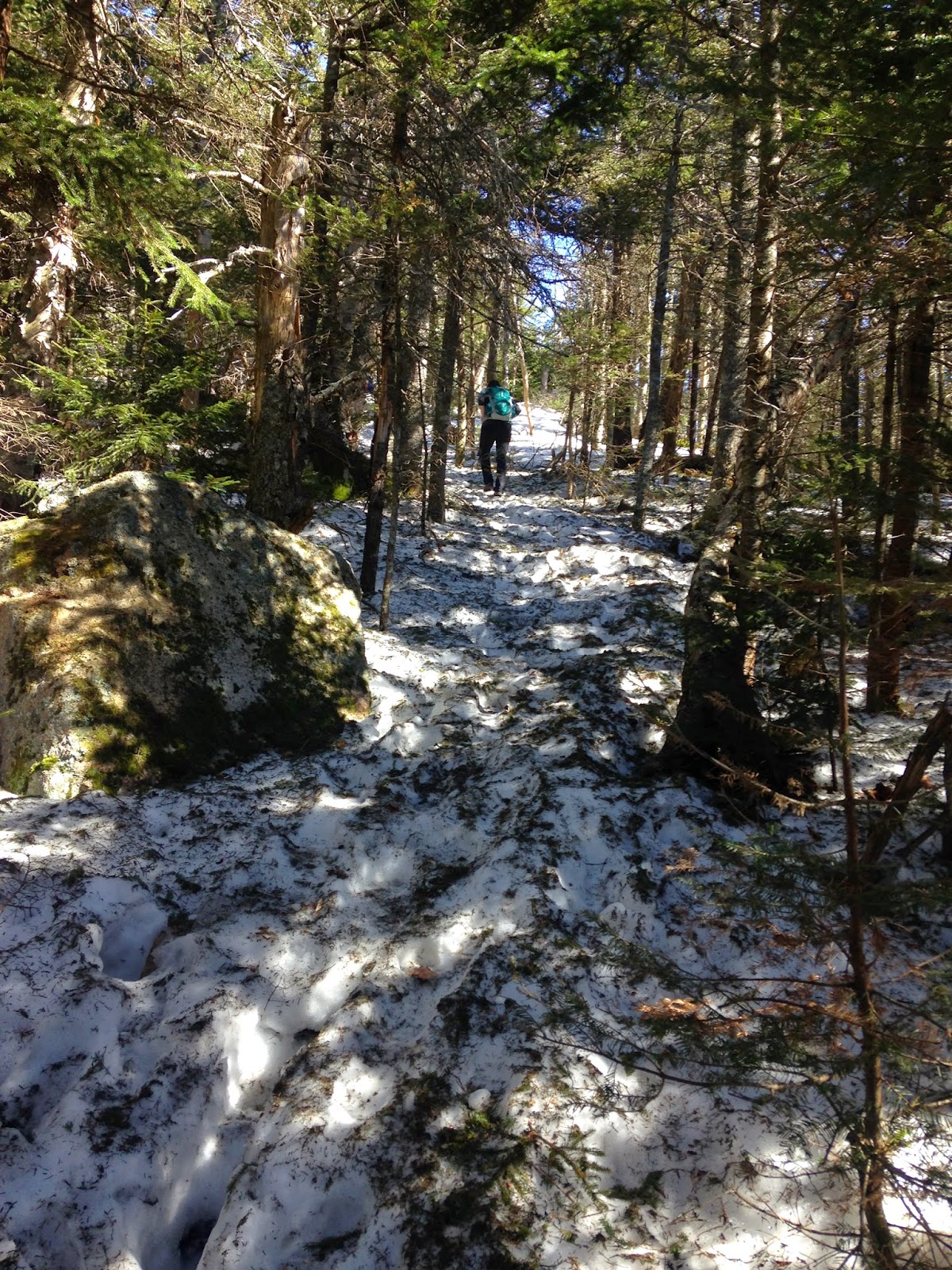 John got too close to a spruce at one point and fell into the "trap."  He was a good sport and posed while Samantha and I took photos. 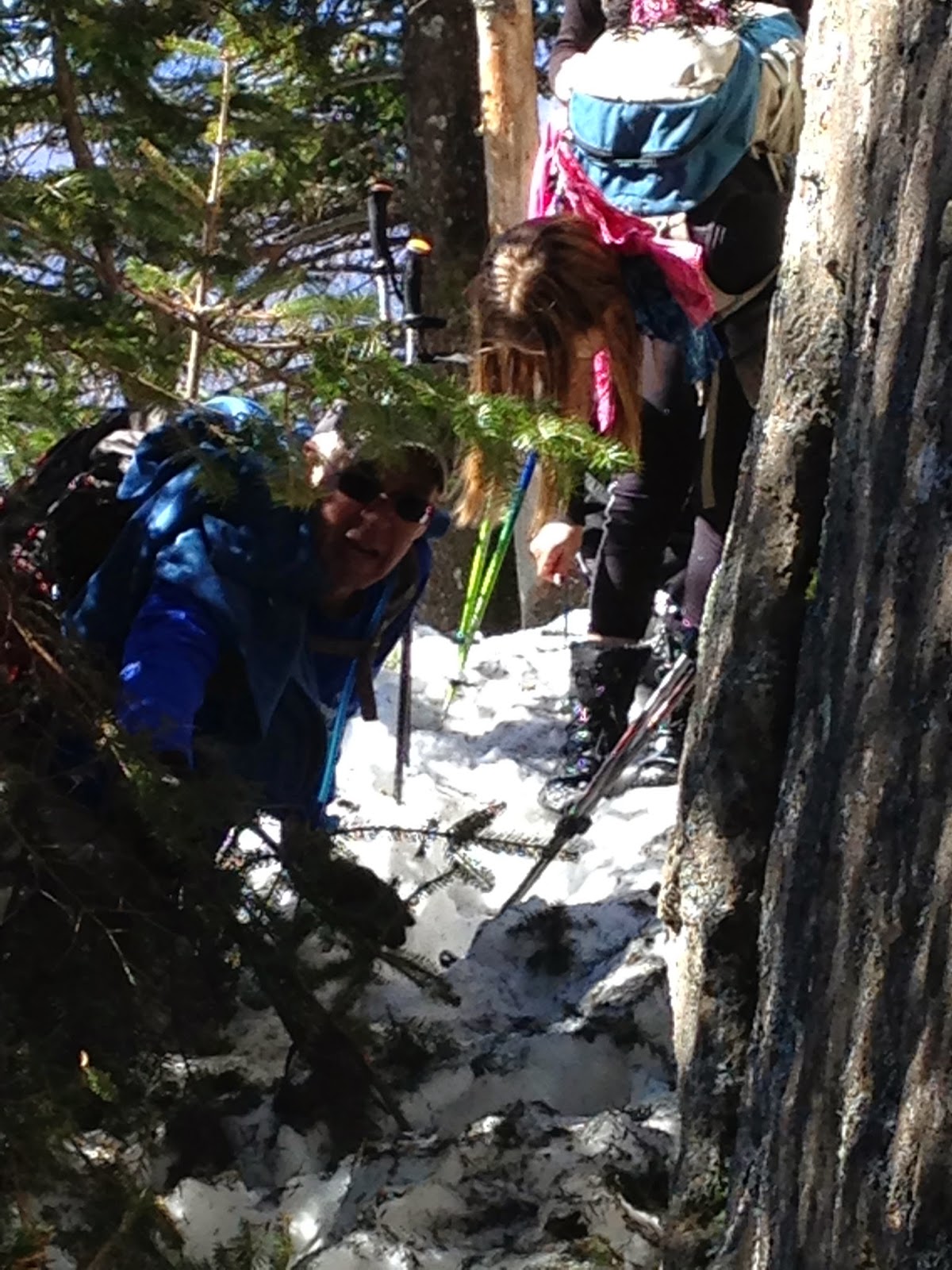 We passed the Tom Wiggin Trail without seeing it (perhaps the sign is missing?) and arrived at the ledges earlier than expected.

The scrambles were fun; the conditions were actually helpful.  Any colder, and the snow would have made life difficult.  If there hadn't been any snow at all, however, then the final scramble would have been harder.


I had remembered the summit as being located immediately after those scrambles, but alas, the summit is found a few more tenths of a mile upward.  There were a couple more steep sections to ascend...

The temperatures were perfect.  Not too hot and not too cold...just right for wafer snacking (Desserts on the 48!). 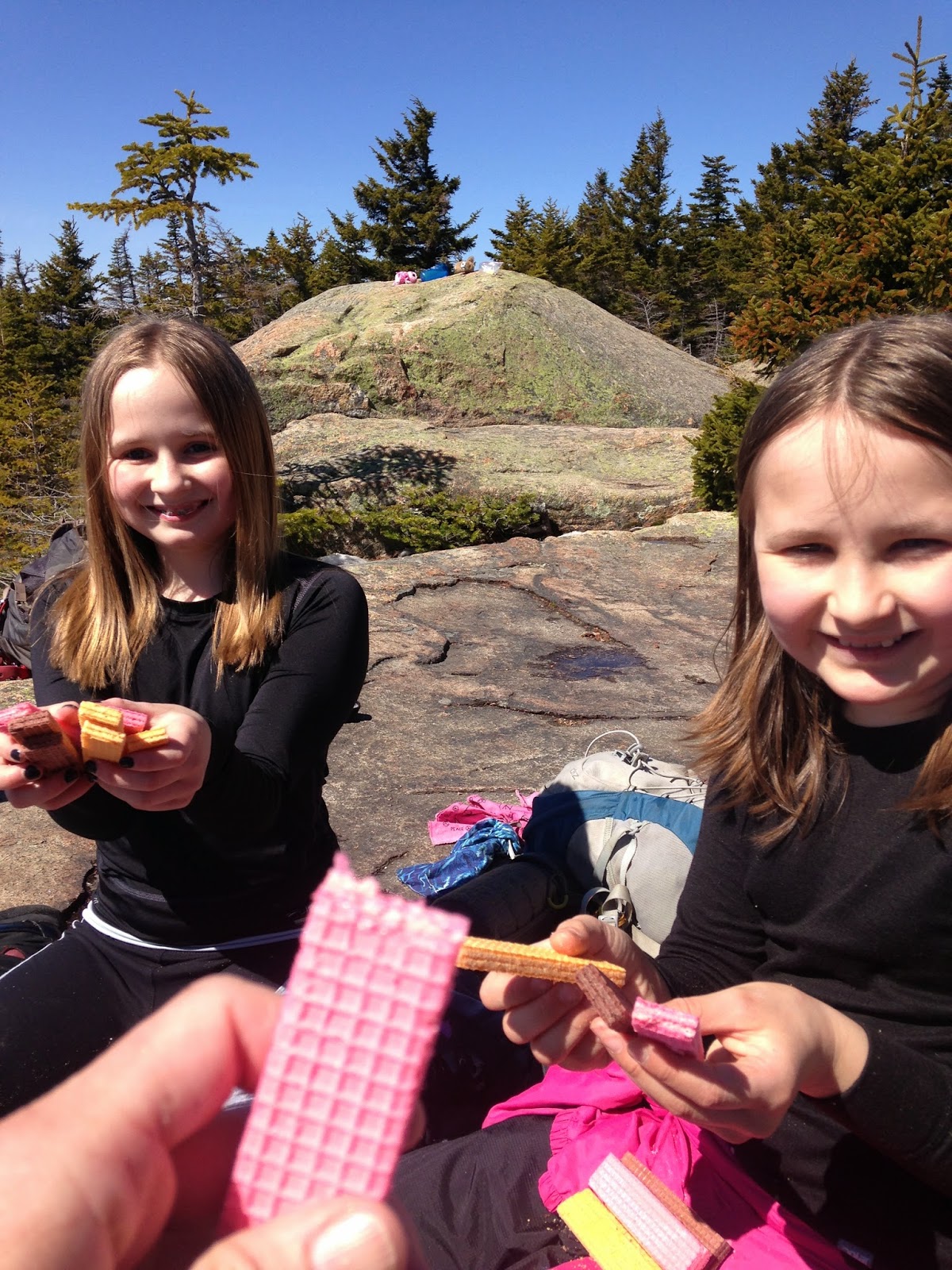 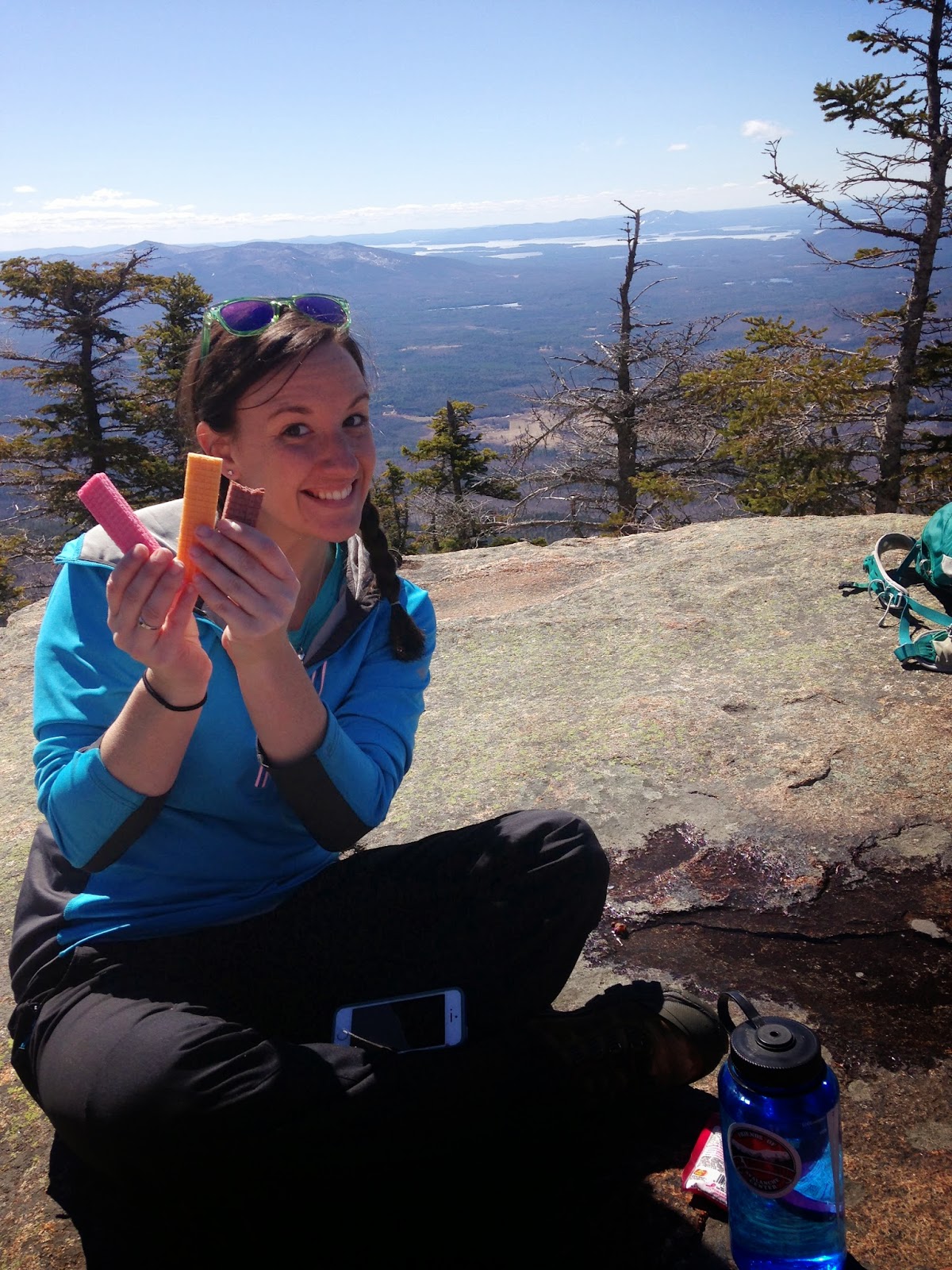 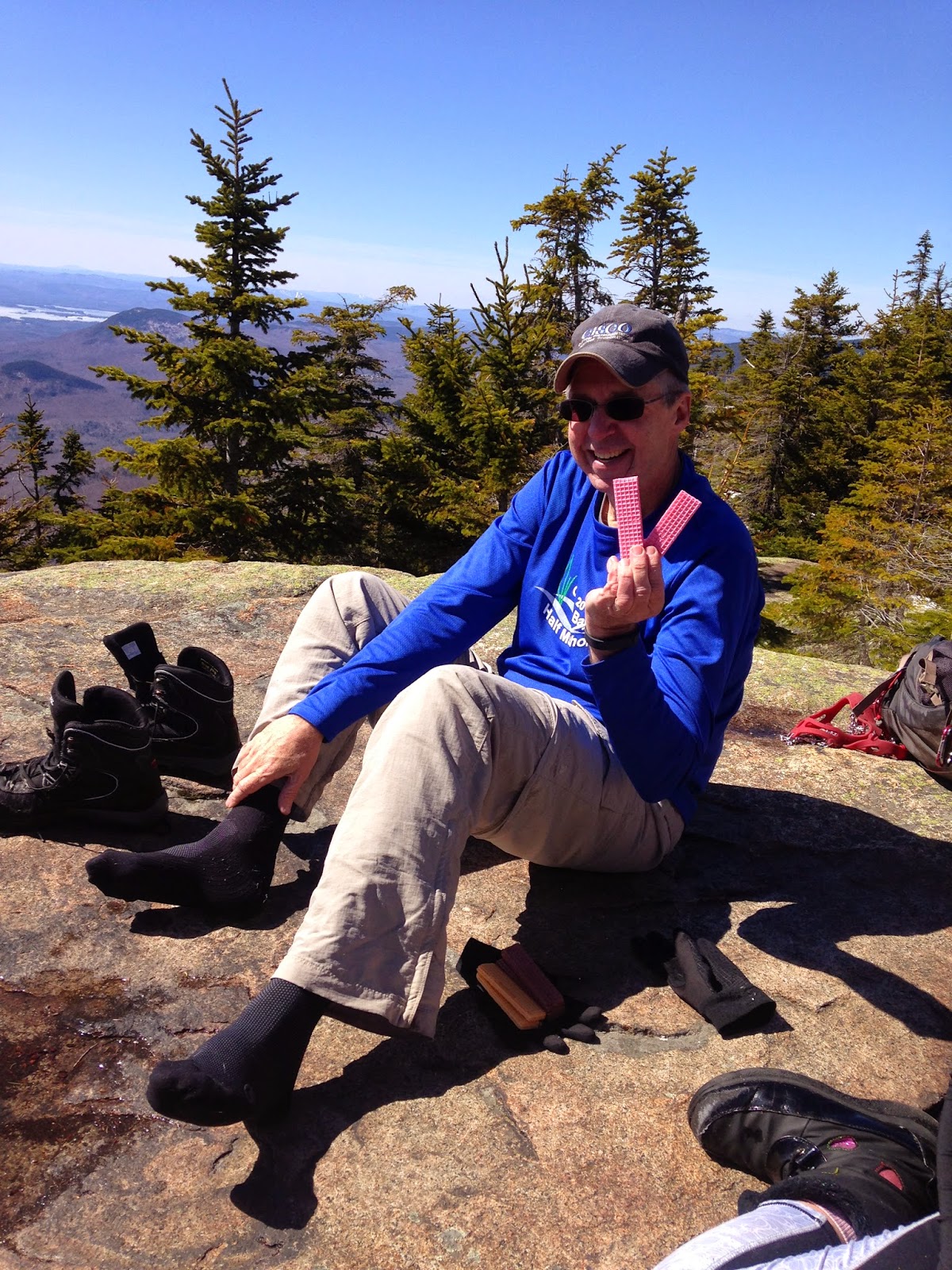 We lounged for a long while, conversing with other hikers and taking cat naps. 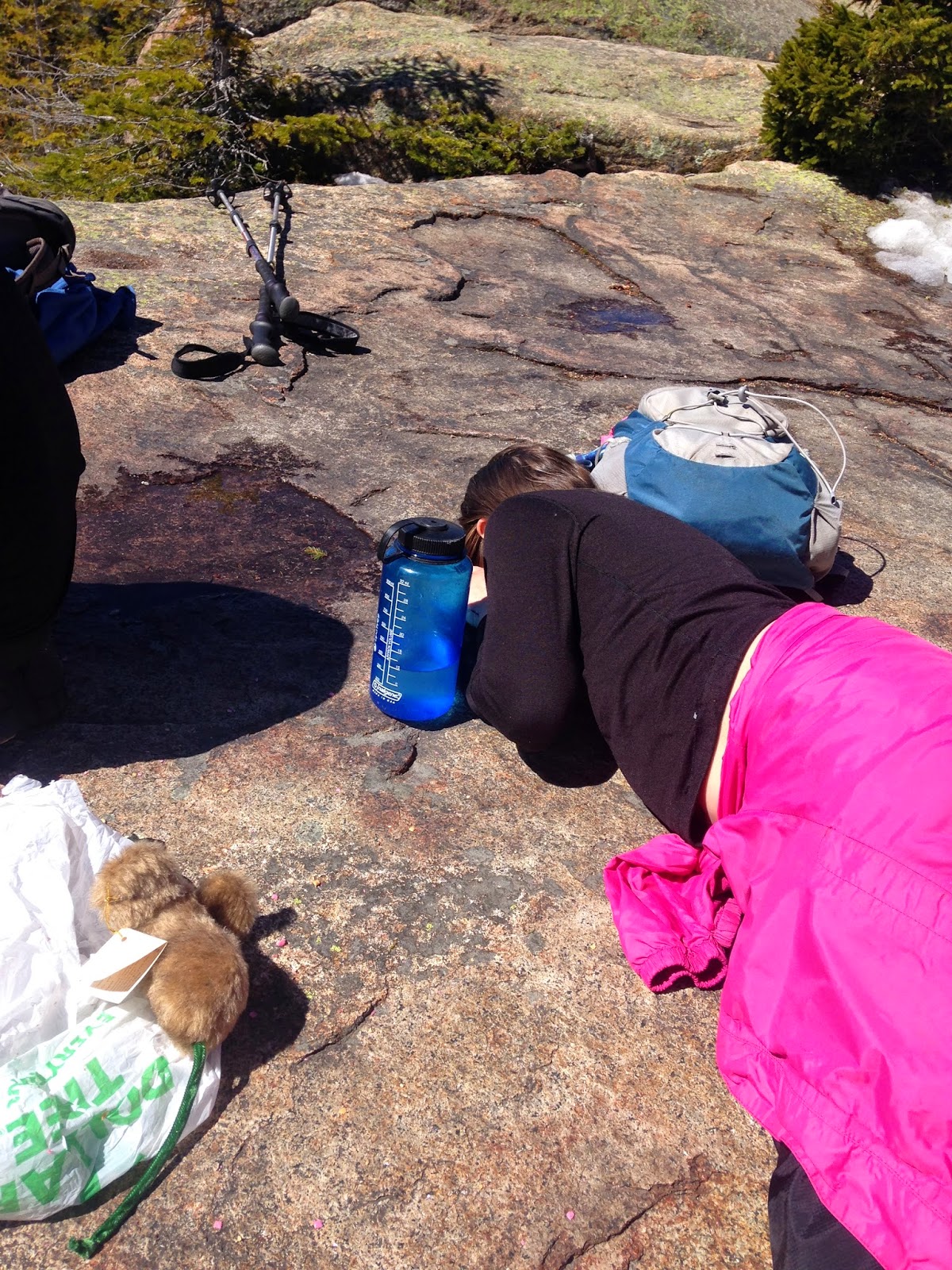 Samantha did a headstand... 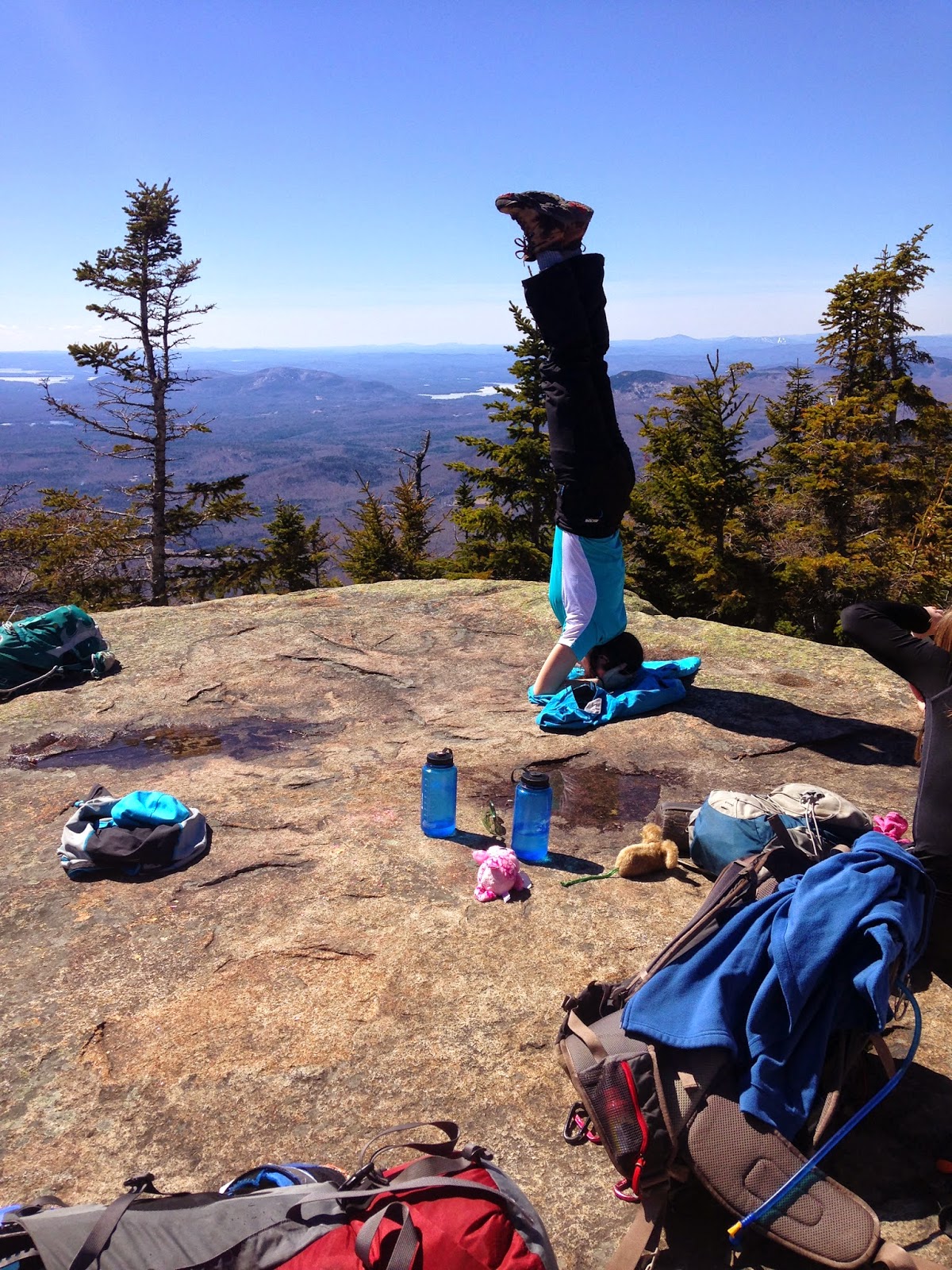 After spending over half an hour enjoying the commonly-acknowledged summit, we got up and trekked less than a tenth of a mile onward and tagged the real summit (directly on the path as you head toward Passaconaway).


From here, we continued along Rollins Trail for 2.4 agonizing miles.  The snow was soft and we sank repeatedly...and no, snowshoes did not help,  The monorail was too narrow to really stay on it with snowshoes, so if you barebooted the monorail, you had a chance of not sinking all of the time.  We still sank quite a bit, though.  It was an arduous journey to Passaconaway, and I look forward to bare summer trail.

Sage stepped off the monorail at one point and sank so deeply that she lost her boot.  I tried to dig it out and failed.  Samantha was able to retrieve it, thank goodness.

When we reached Dicey's Mill Trail, we took a break, then I donned my snowshoes in a desperate attempt to make the journey easier.  'Twas in vain.  The 0.7 miles up Passaconaway were much firmer than the 2.4 miles along the Rollins Trail.  Everyone else barebooted without postholing while my left leg cramped up from wearing the 'shoes.  I took the 'shoes off after a tenth of a mile of agony and barebooted along with everyone else to the summit. 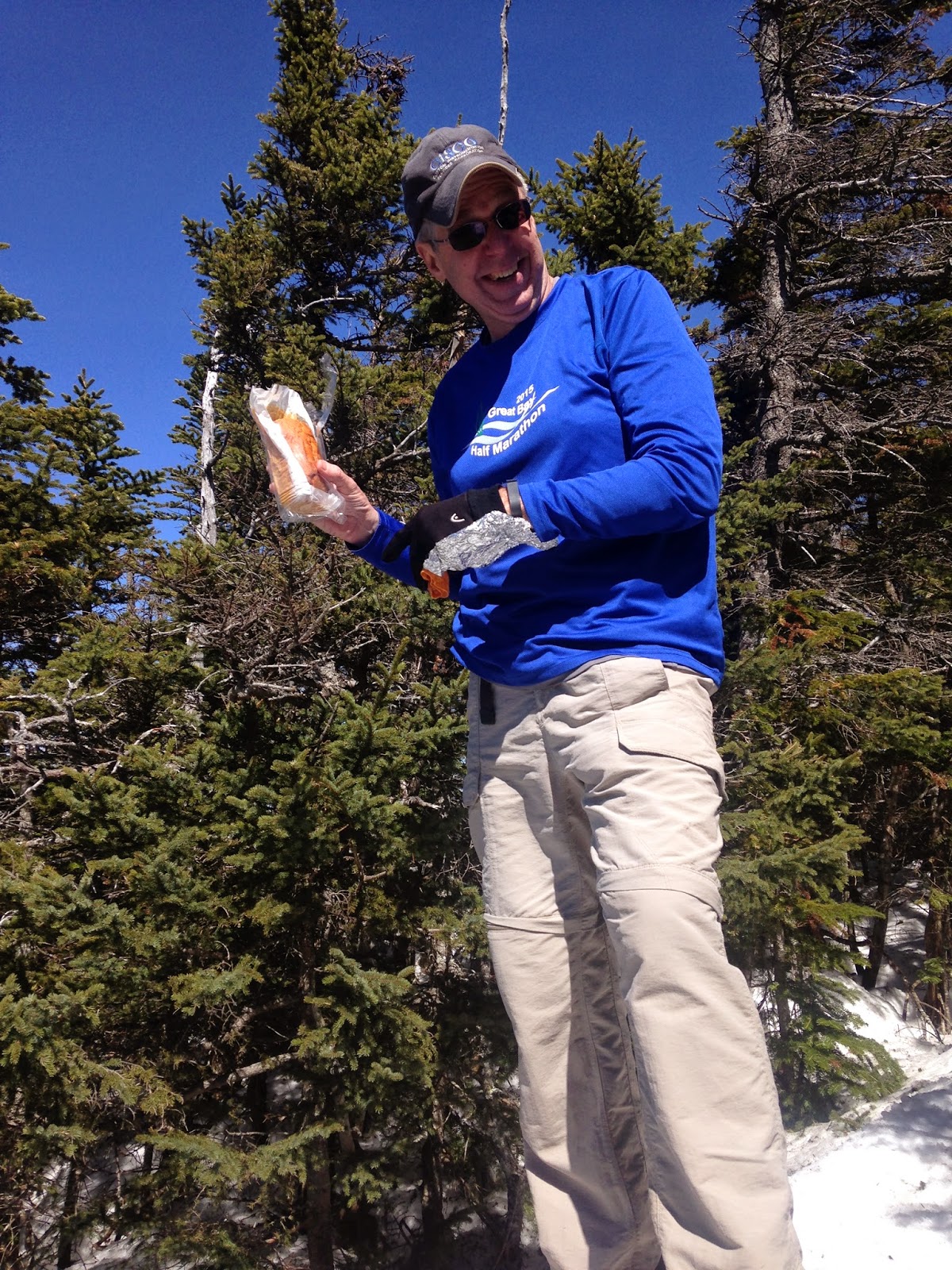 We visited the actual summit of Passaconaway before sitting down to nosh on pound cake.  I don't have photos of the actual summit because it's a tiny area in the middle of a bunch of trees just off the main trail.  Boring.

Our way down felt simpler...I kept my snowshoes off and slid down much of the trail on my boots.

The large water crossing near the intersection with Tom Wiggin Trail was easily handled thanks to the log in the photo below. 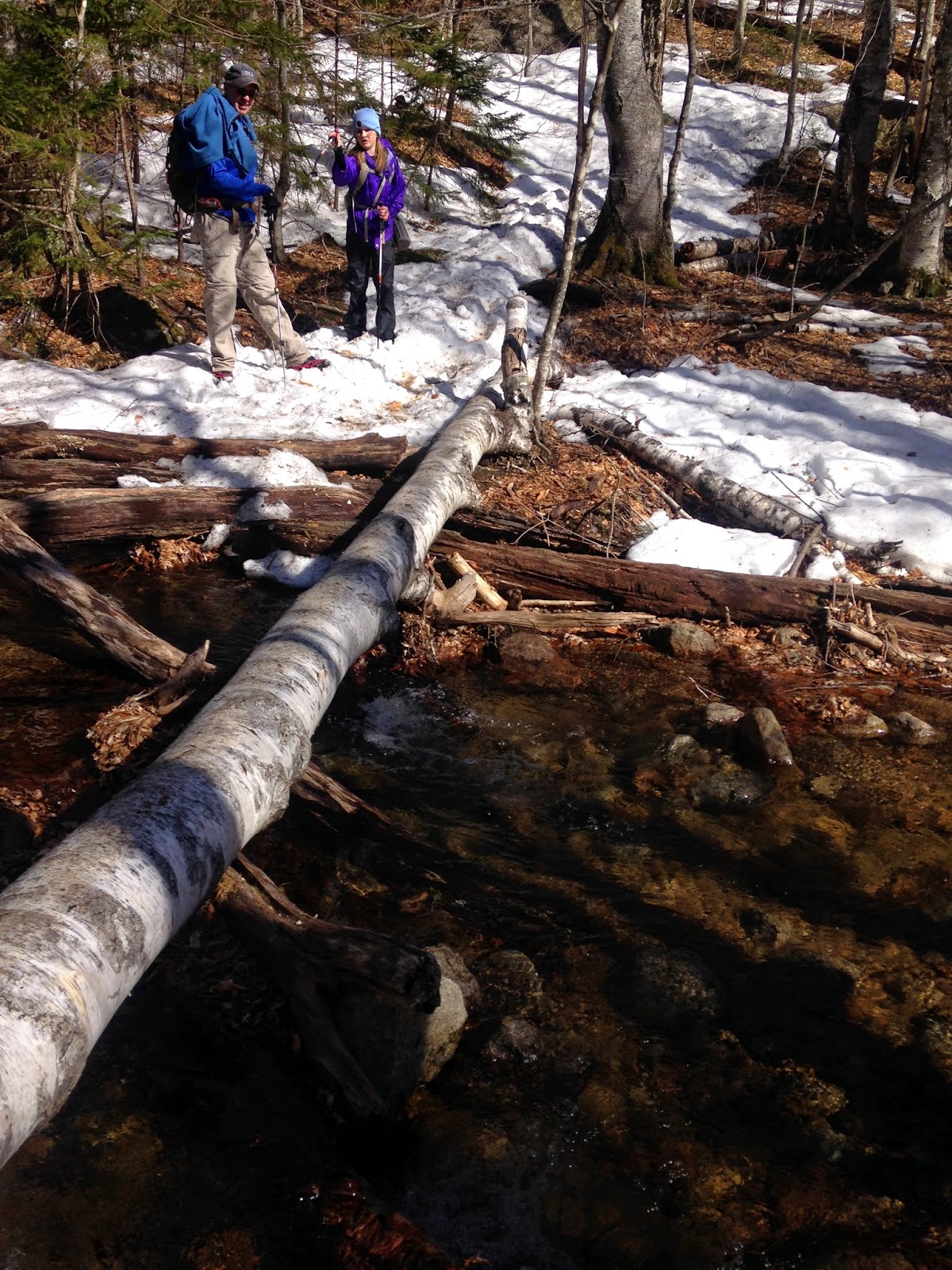 The snow took forever to go away. It remained stubbornly stuck to the trail well past the intersection with Tom Wiggin Trail. 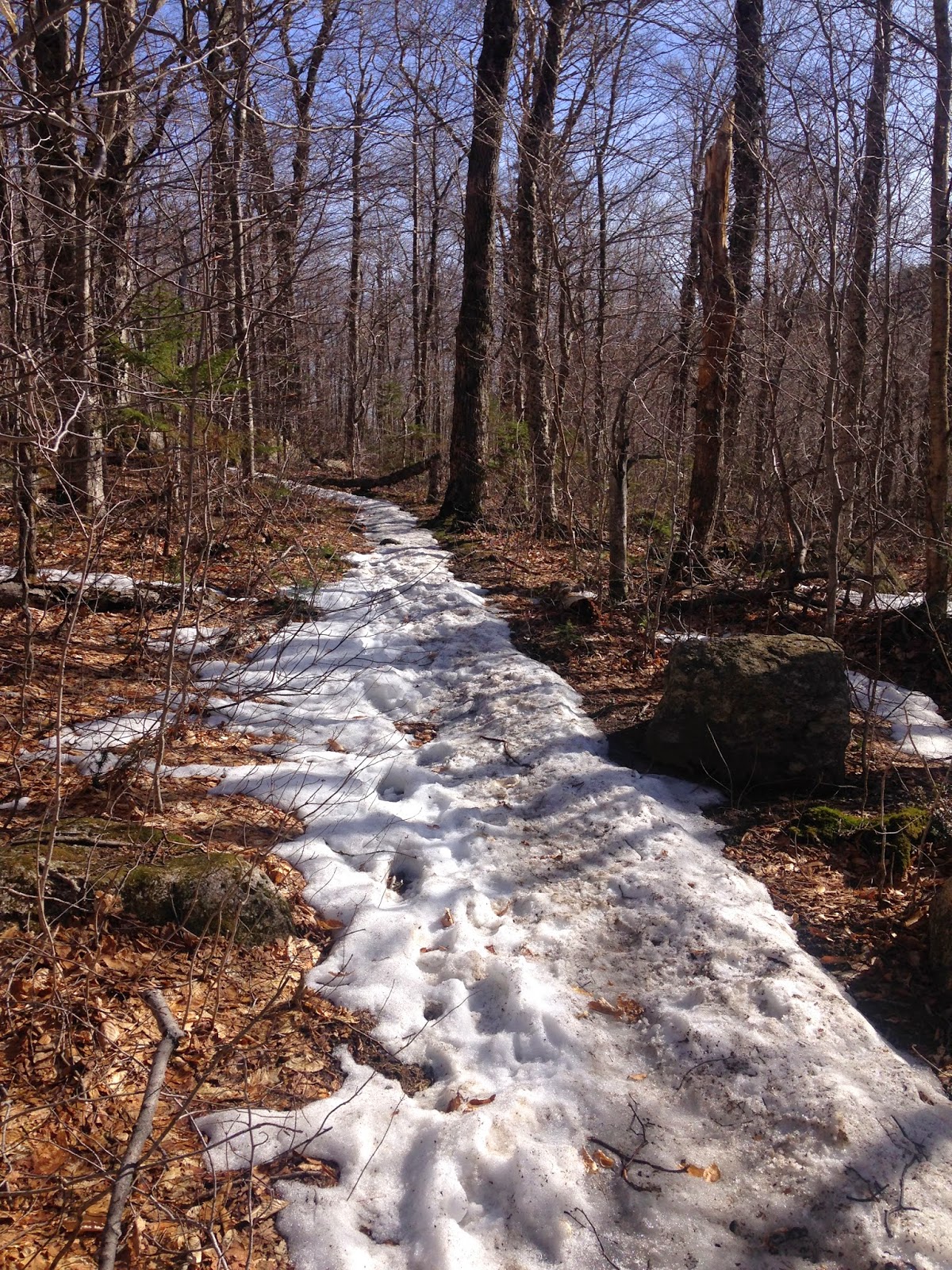 We eventually got back to rocks and roots.


It is extremely kind of the property owner to allow hikers to pass through his/her land.  I love the sign on the gate! 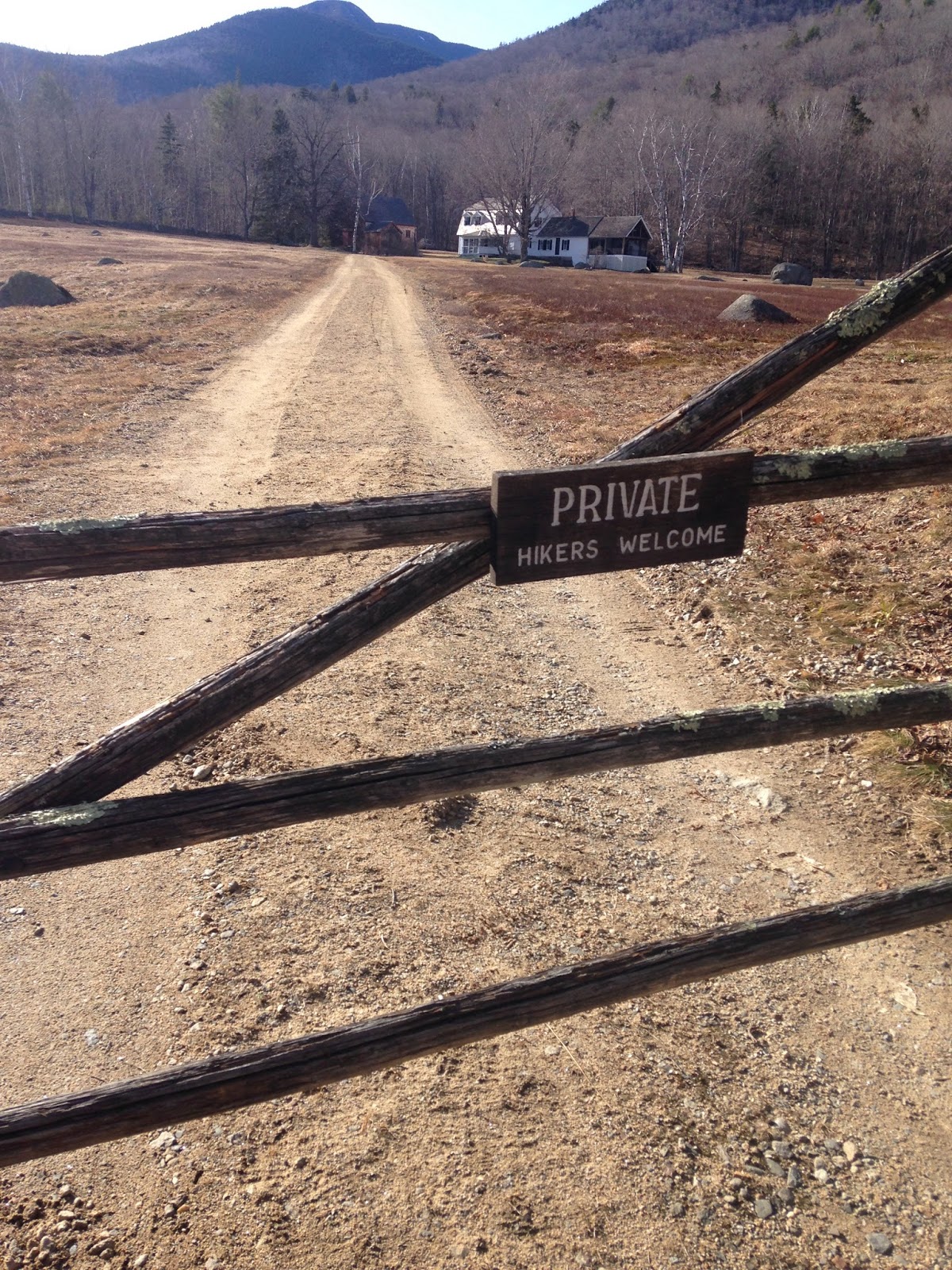 Many thanks to John and Samantha for the excellent company.  It's always a pleasure to hike with them!  Lots of smiles and laughs.

We hope to get out there again this weekend.
Posted by Patricia Ellis Herr, Alexandra Herr, and Sage Herr at 12:06 AM