We had planned a Jefferson-Washington-Monroe loop hike, but the forecast for Mt. Washington included sustained winds of 40+ miles an hour.  We therefore opted for a Tom-Field-Willey traverse instead.

We met our friend Samantha at the Ethan Pond Trail trailhead, spotted a car, then drove the 3 or so miles up to the Crawford Notch Depot.  We began our hike from there, taking the Avalon, A-Z, and Mt. Tom Spur Trails up to Mt. Tom before traversing across Field and Willey on the Willey Range Trail.

Here we are, about to start our hike... 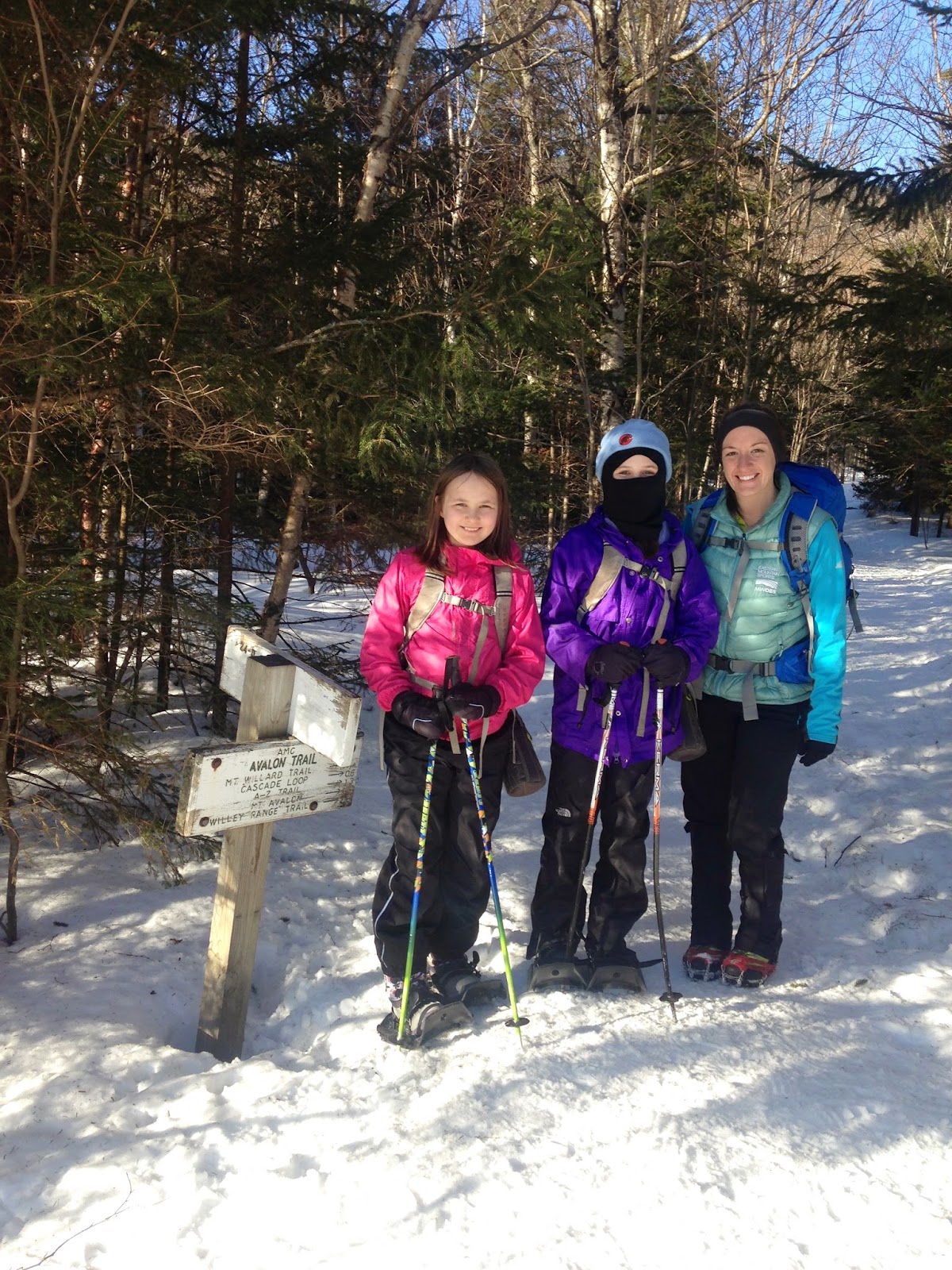 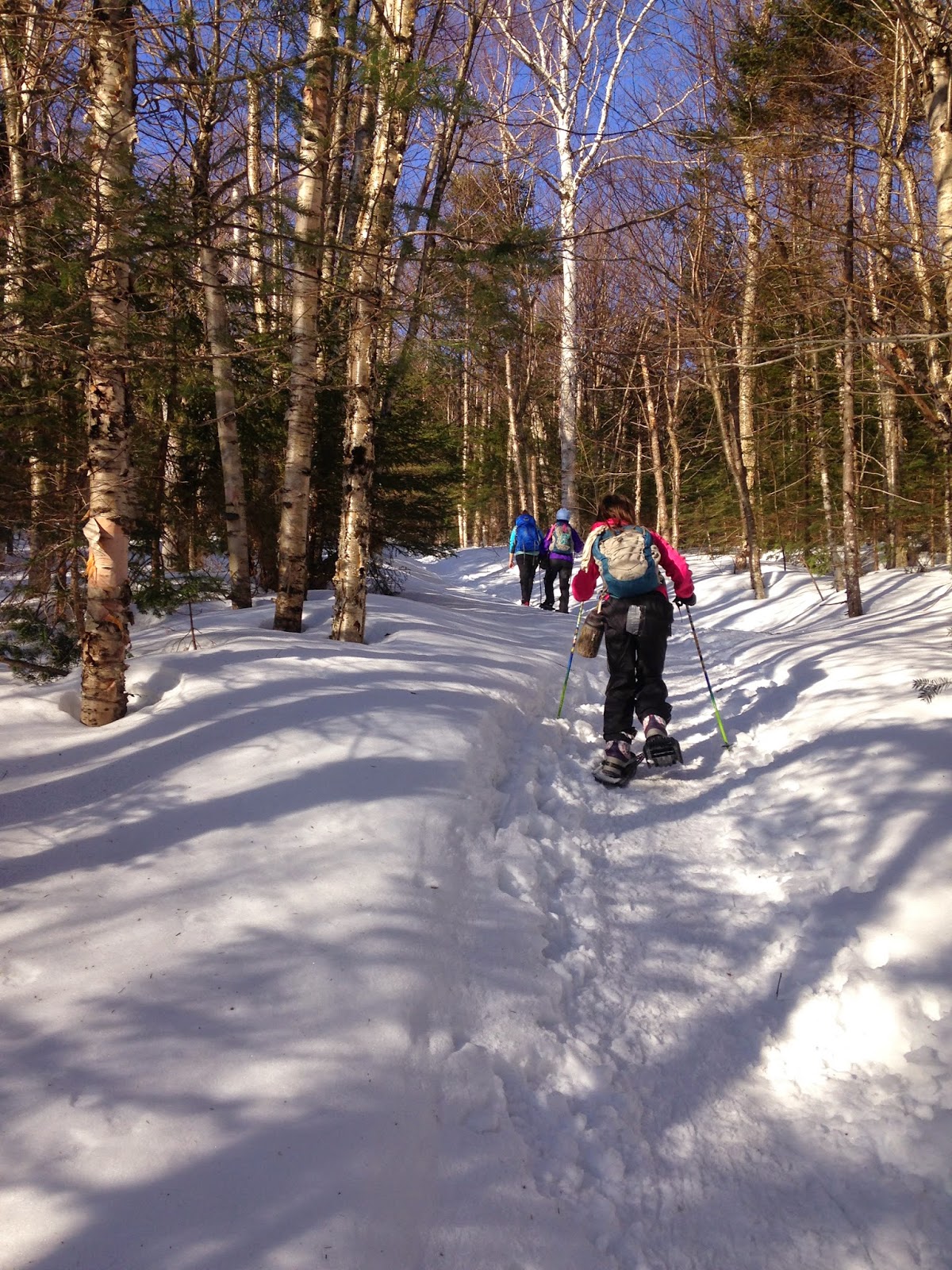 Since the temperatures were warm (above 32 degrees), I thought we would sink into the snow...however, the pack was firm.  It was just soft enough for our feet to bite in and grip the trail, but it wasn't soft enough for postholing.  Sage and I therefore took off our snowshoes a few tenths of a mile up the trail and carried them for the rest of our hike.  Alex ditched hers once we got to the summit of Tom (and Samantha carried them for her -- thanks, Samantha!).

At the intersection, about halfway up Tom... 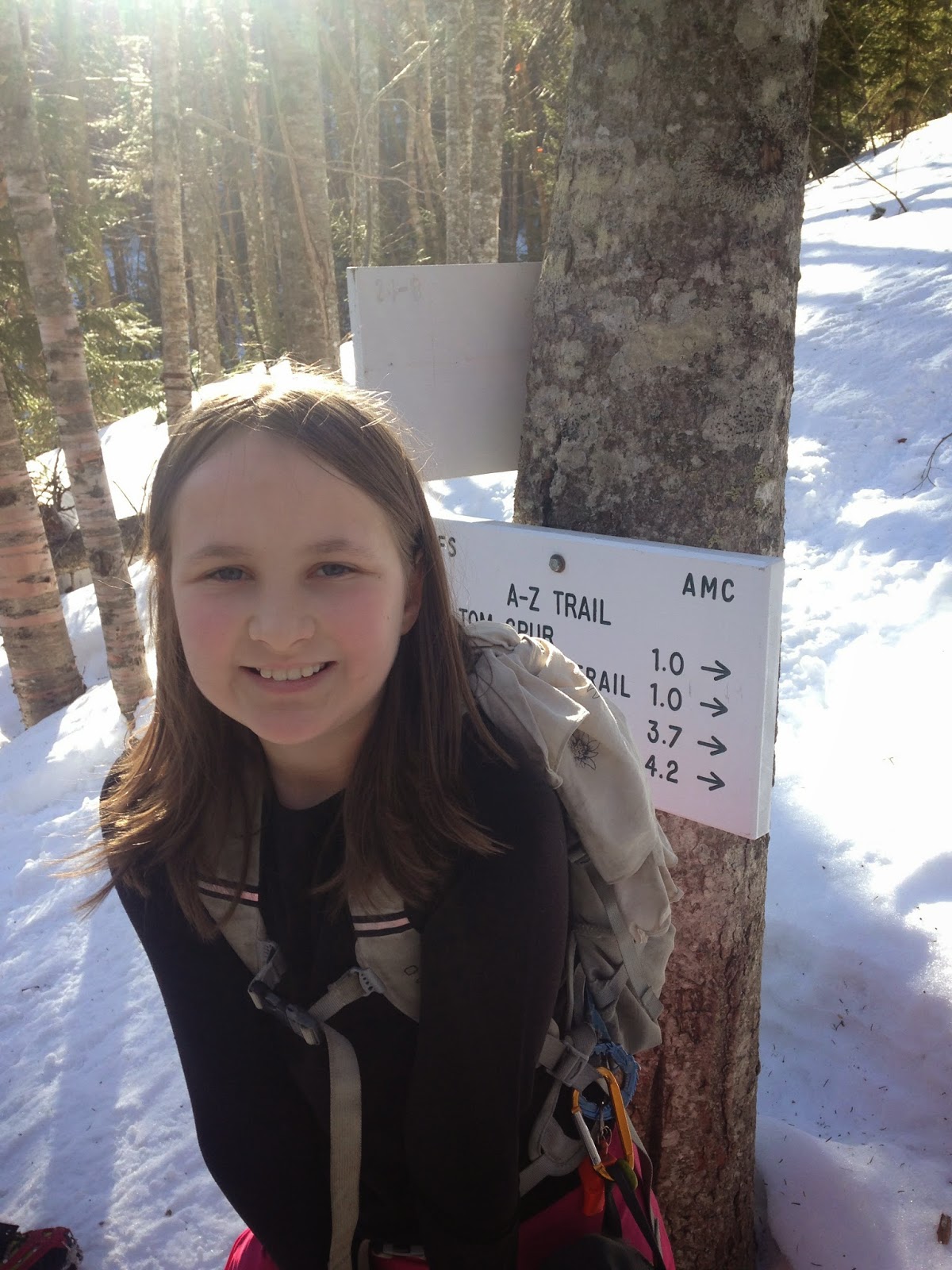 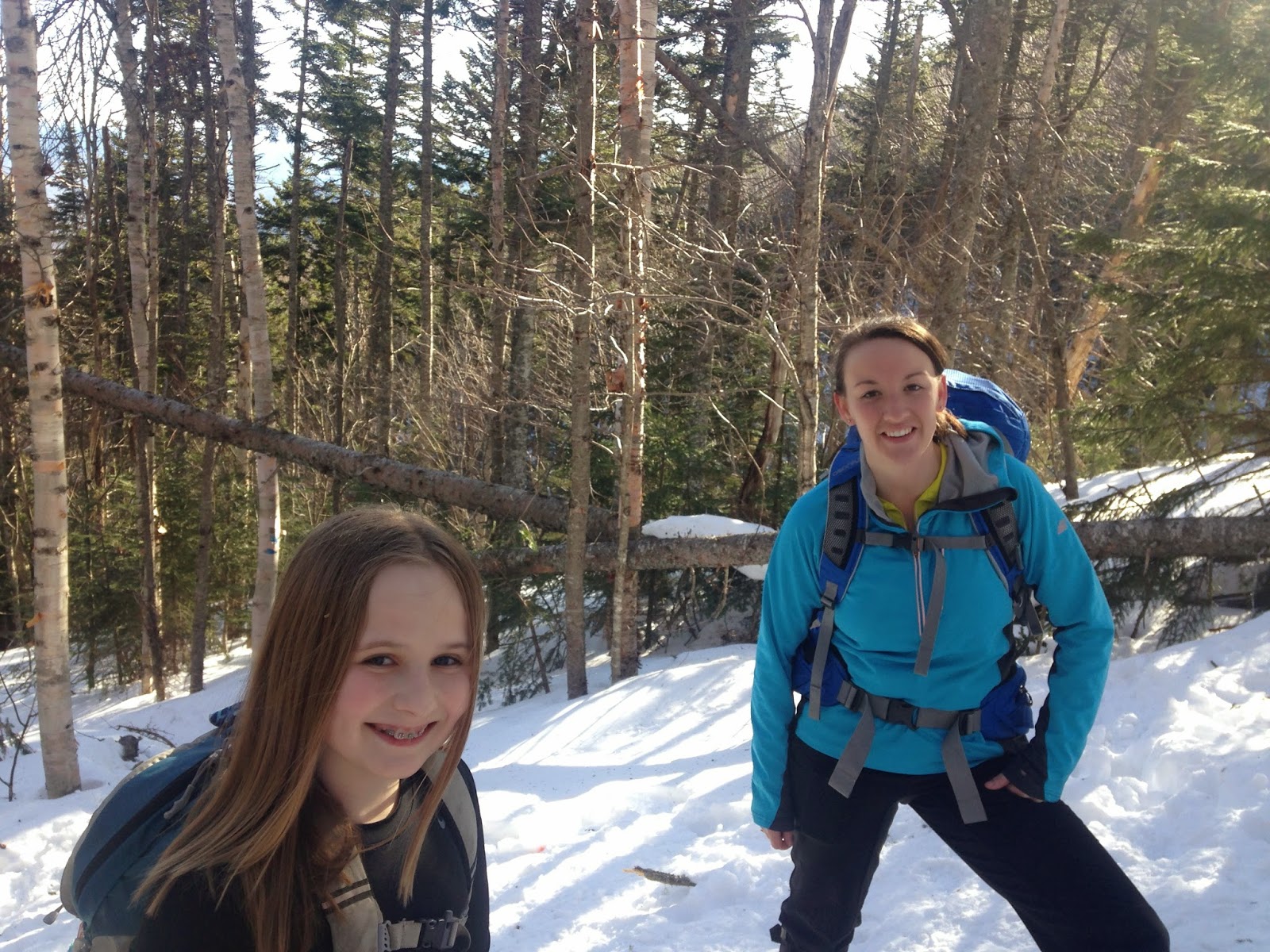 The final mile up to the Mt. Tom Spur was steeper than I remembered, and I had to stop more often than I wanted in order to catch my breath, but we eventually made it up and enjoyed the stellar views toward Field, and toward the Presidentials.

After enjoying the views, we walked over to the actual summit...the cairn was buried under the snow, so we used the dead tree for our official summit photo. 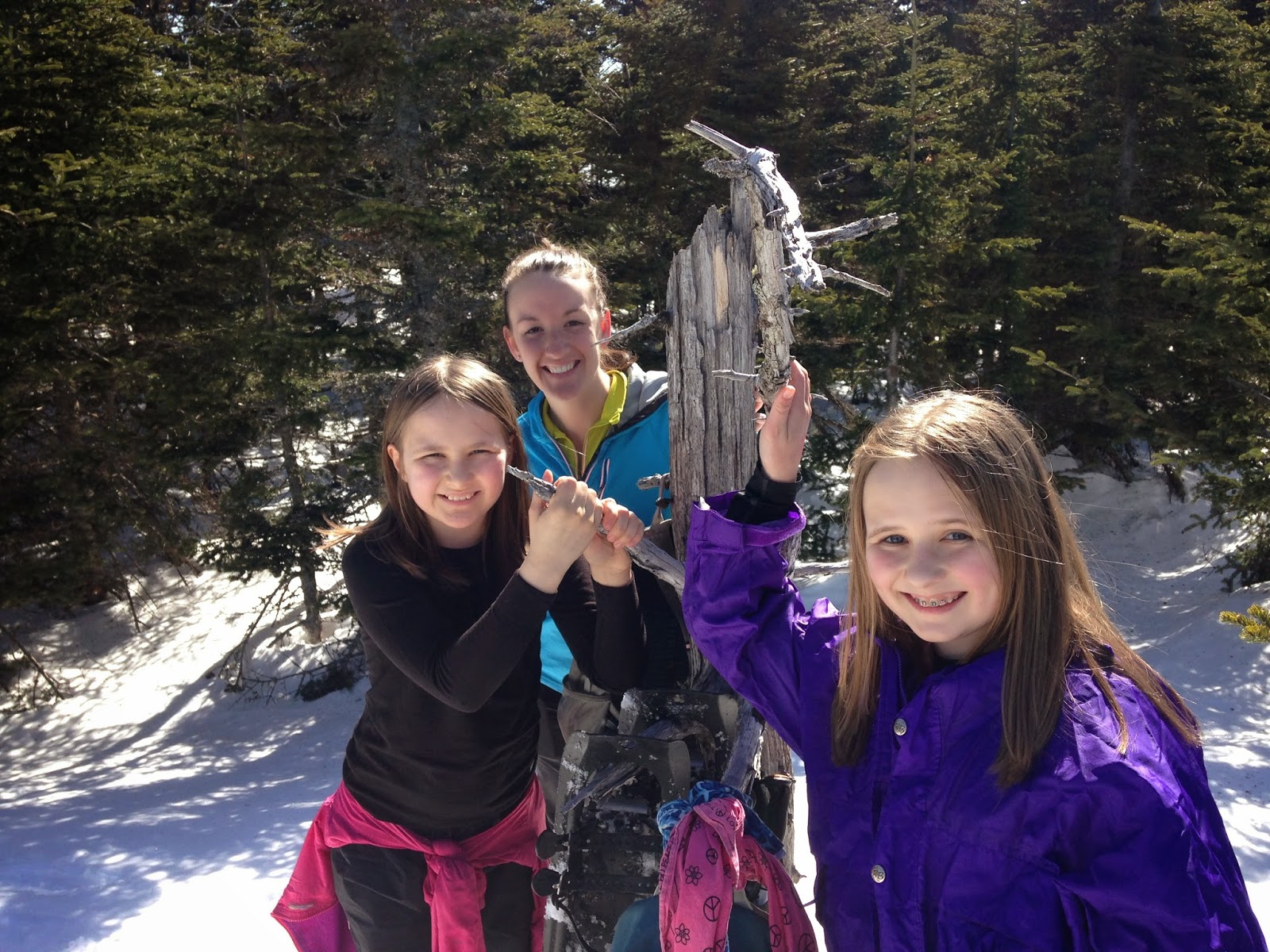 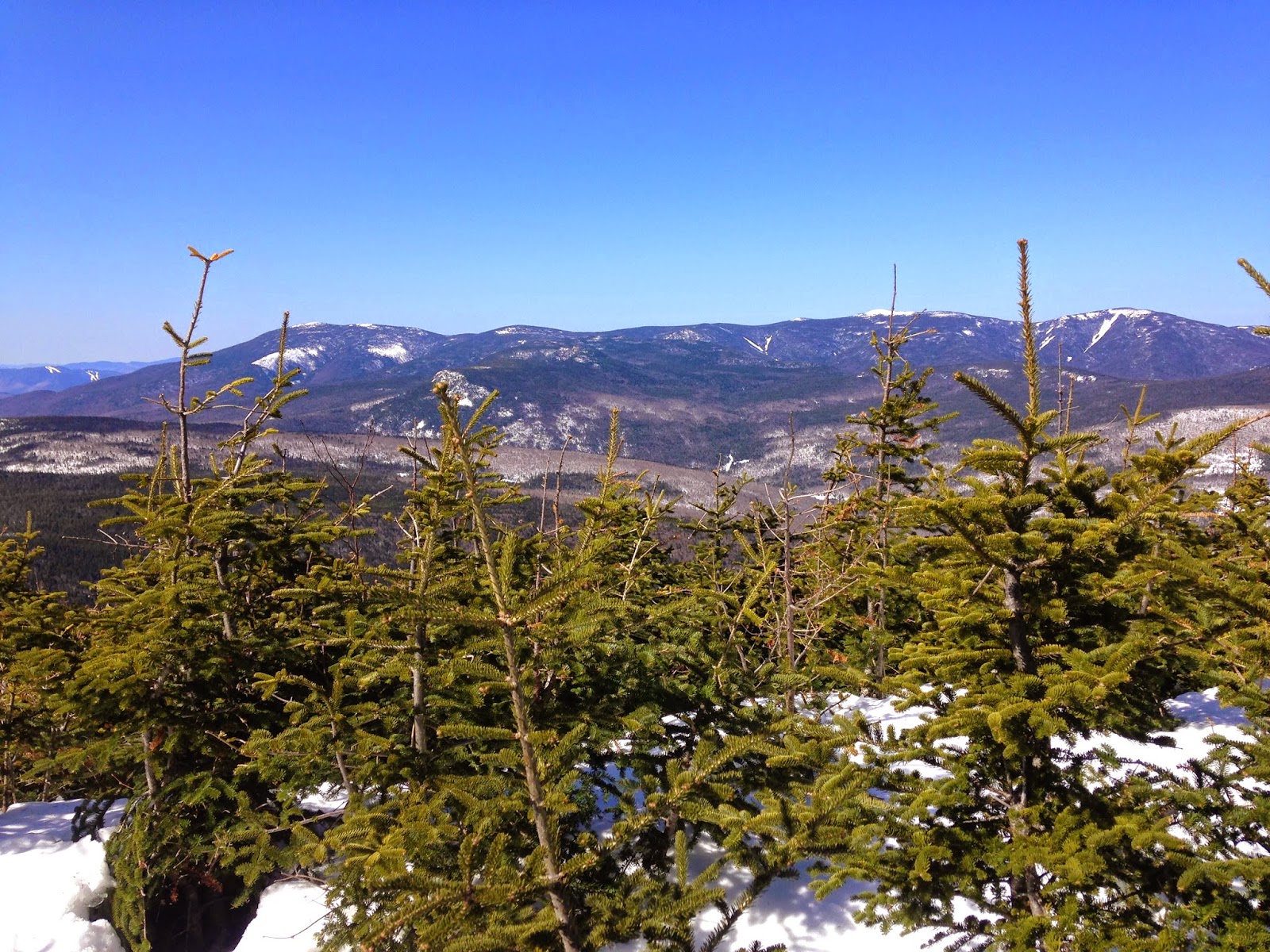 A gray jay showed up.  The girls and I are hardcore Leave No Trace people...except when it comes to gray jays.  I usually carry bird seed when I do Tom, Field, Jackson, or Waumbek, since I almost always see a gray jay (or three or five) when I hike those peaks.  This time around, however, I had forgotten the bird seed.  Alex offered a nut, which I didn't think the bird would want...it flew down to investigate.

It took the nut, but I don't think it ate it.  It didn't accept any other nuts from Alex, and it didn't want any from Sage, either. 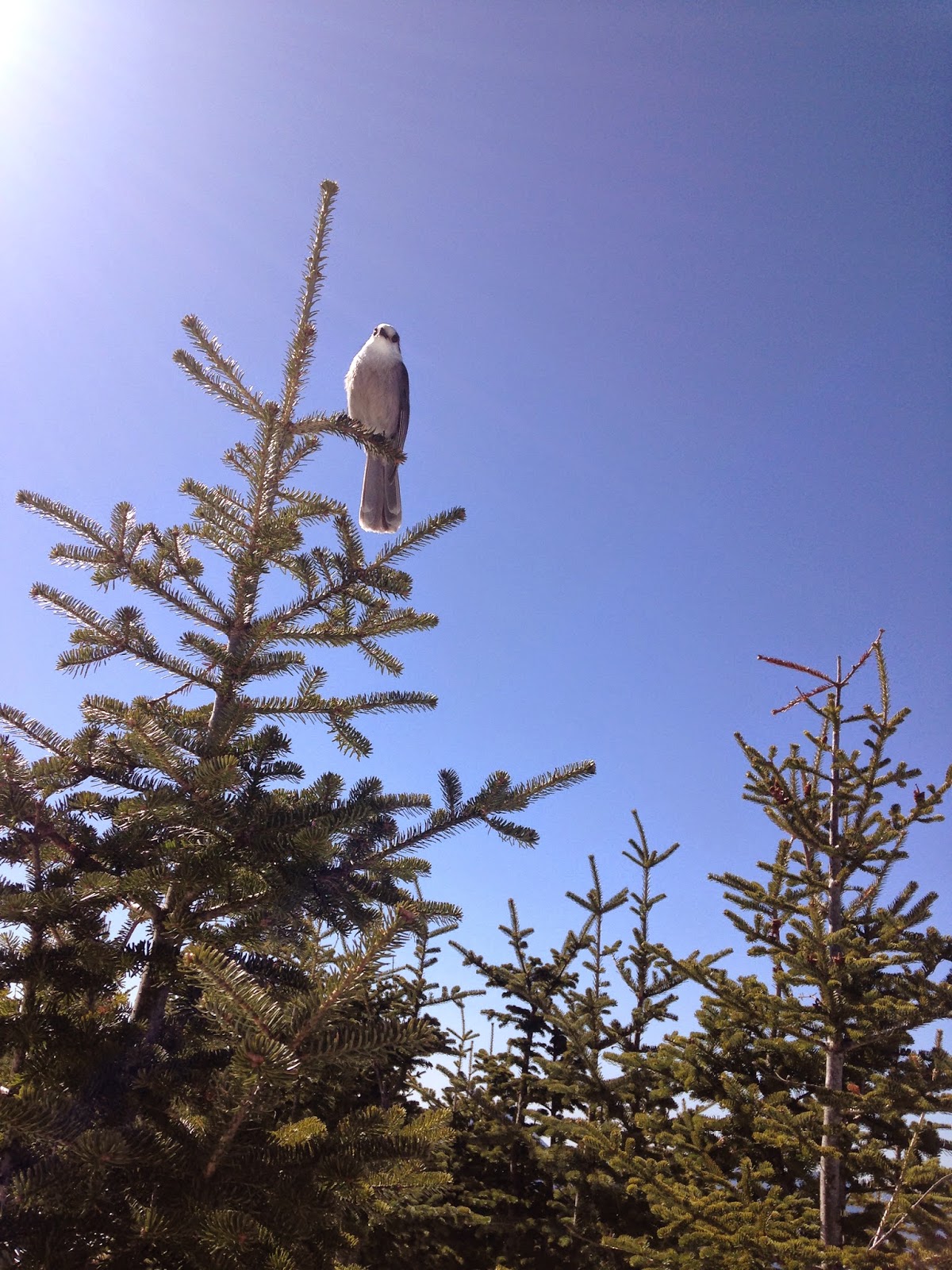 From Tom, we barebooted to Field.  The trail held well.  One fellow passed us on snowshoes, and we noticed that his 'shoes bit into the soft snow just as much as our boots did...neither choice seemed better in terms of keeping the trail smooth. 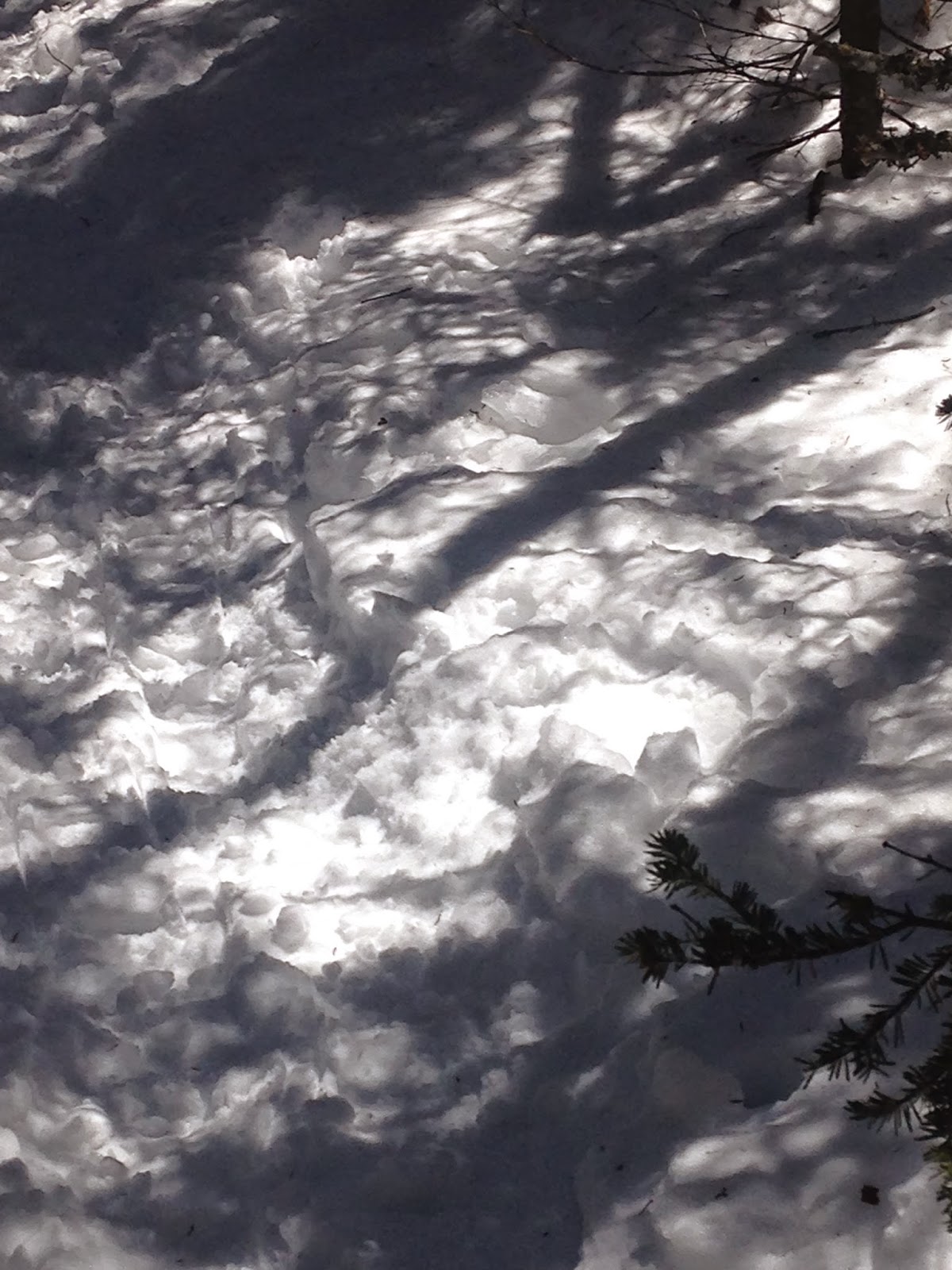 The way up Field is gentle, save for the last 50 yards.  The photo below makes this part of the trail look more mellow than it really is. 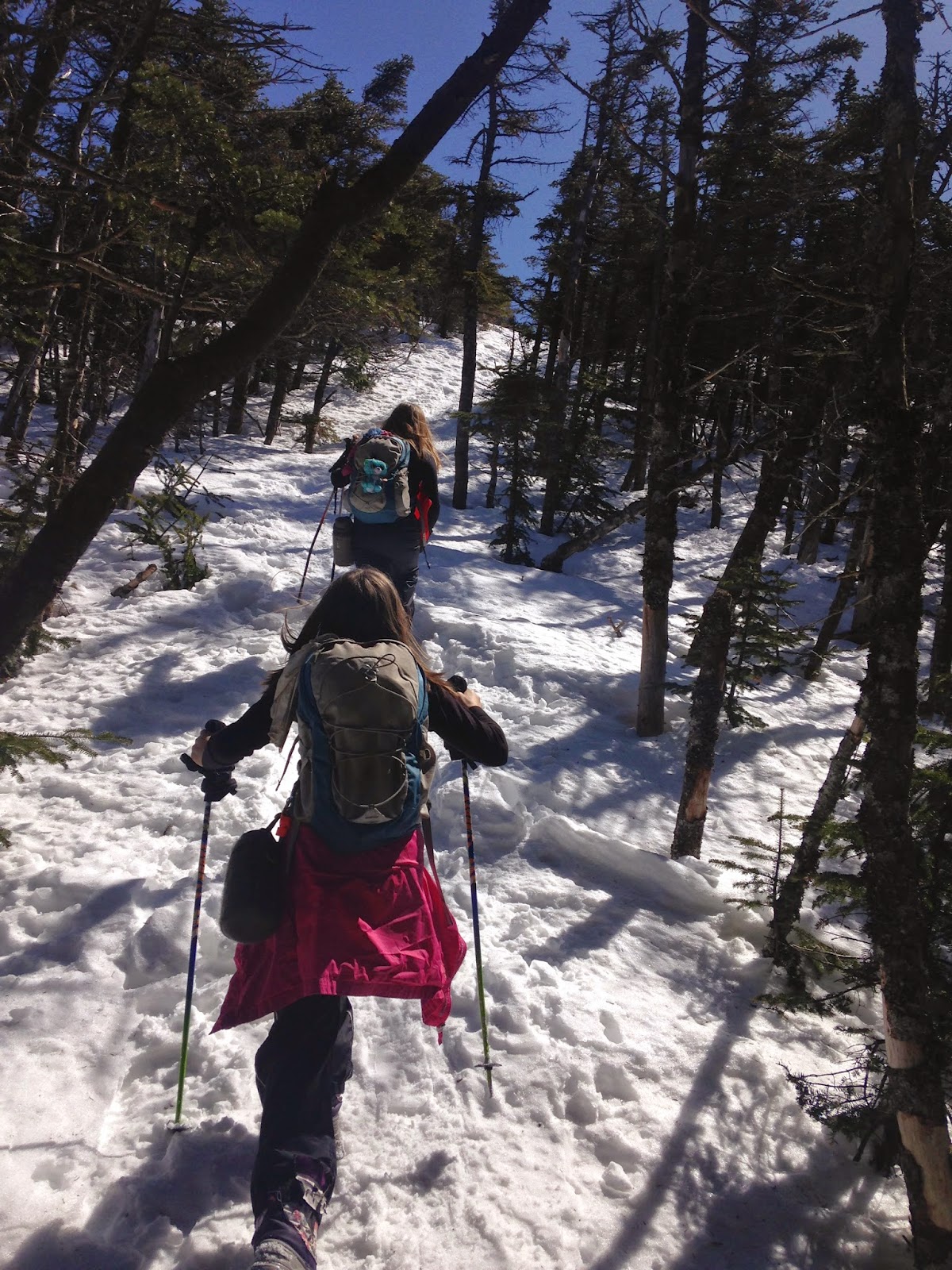 Looking back at Tom, near the summit of Field. 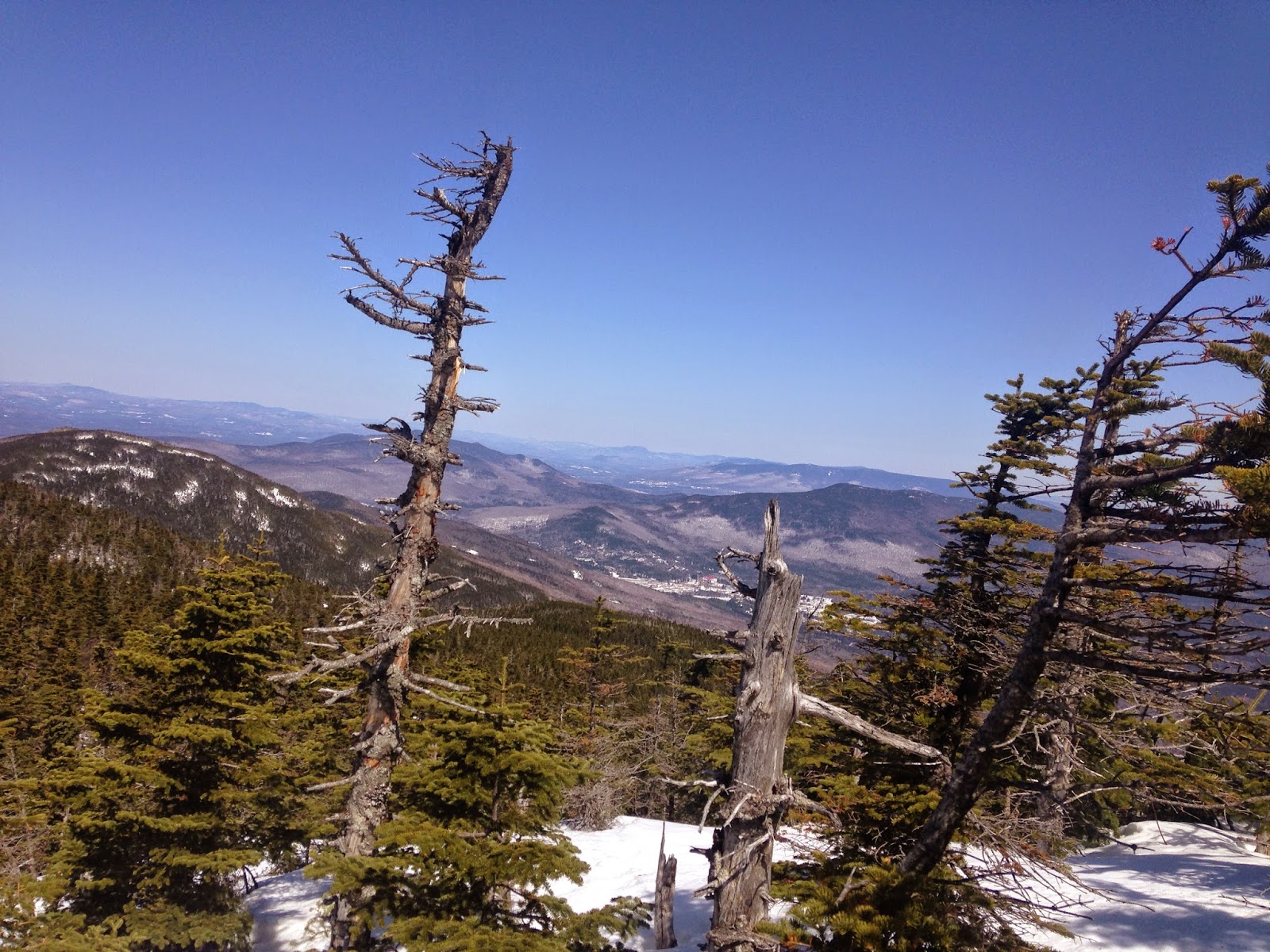 The summit cairn of Field is buried under the snow.  Alex walked around the area a bit and fell into a spruce trap.


Alex, Samantha, and Sage on the summit of Field. 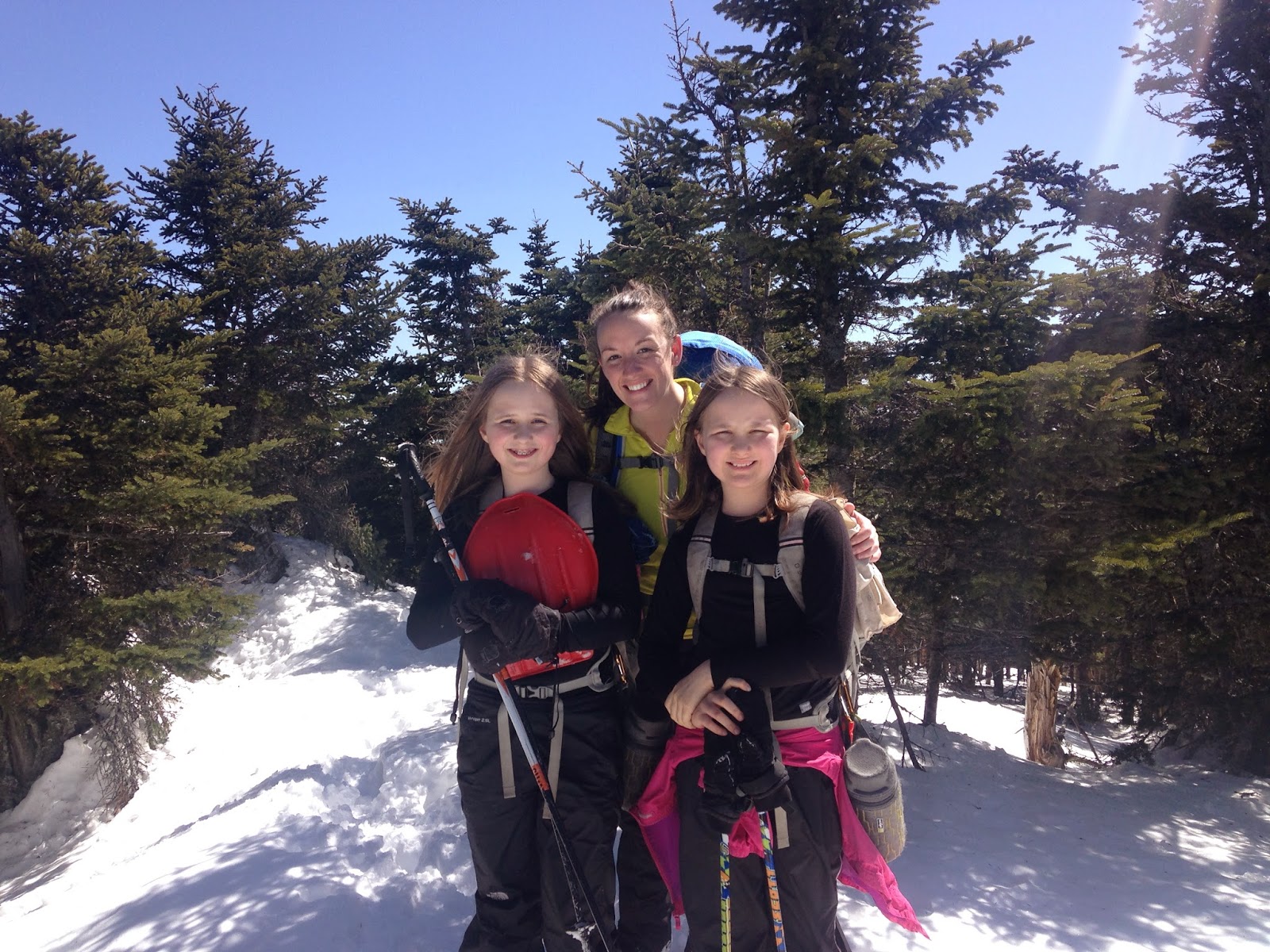 Me (with my hair doing something funky), Alex, and Sage on Field.


We could feel the wind up there (though it had been completely calm on Tom), so we moved into the trees to have our snacks.  We ate Fudge on Field (Desserts on the 48!). 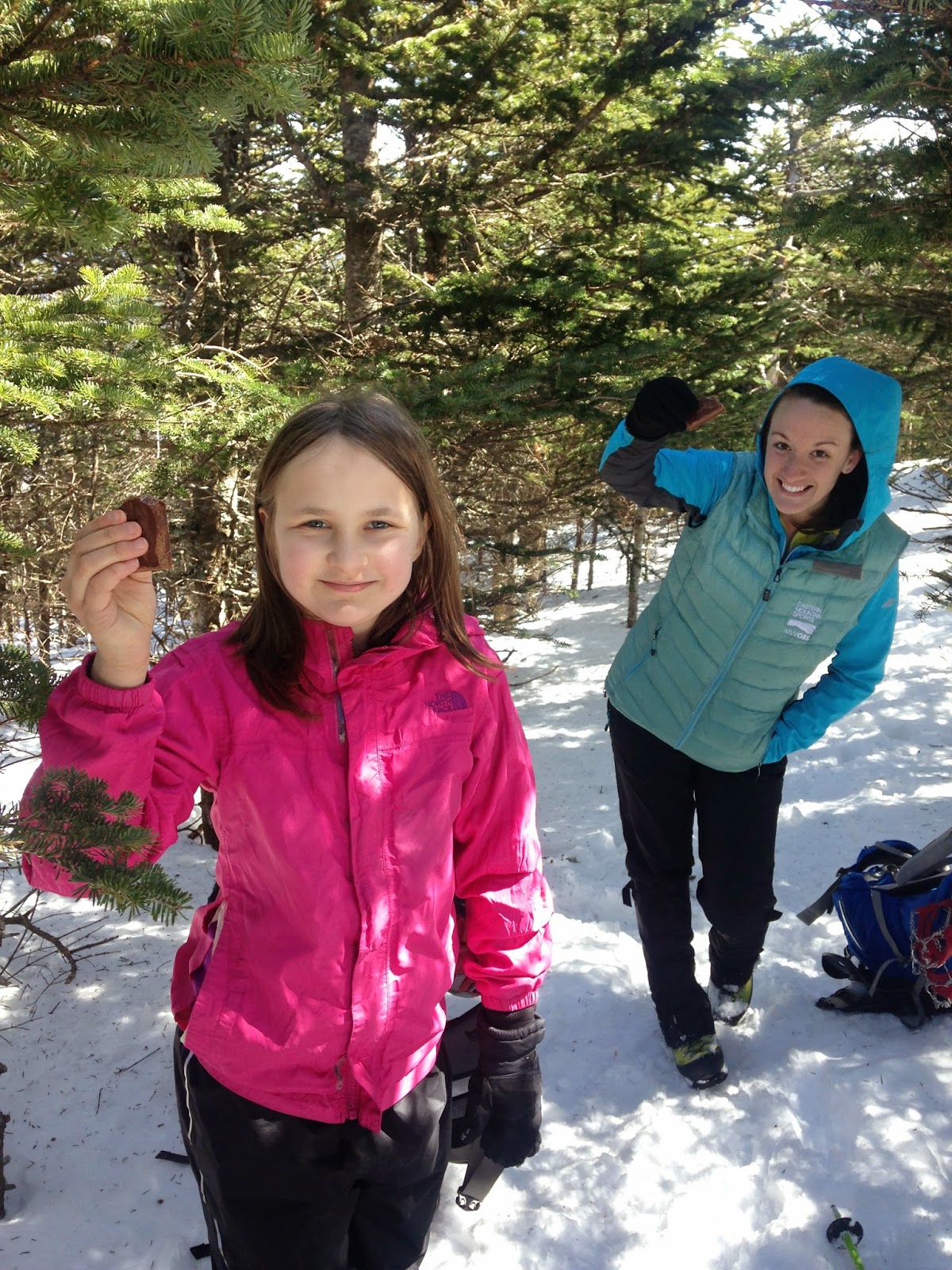 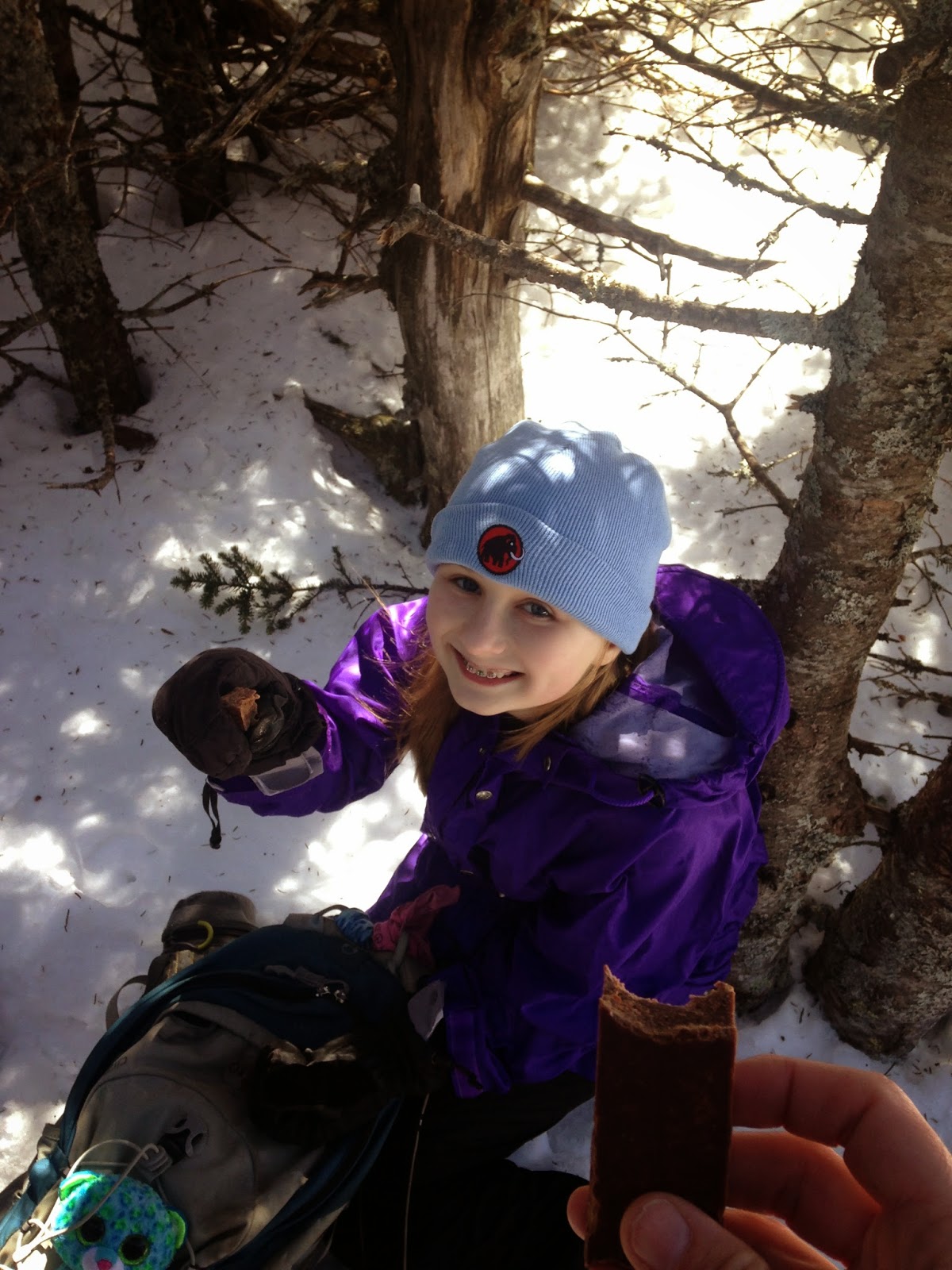 The trail from Field to Willey is also mellow...and more beautiful than I had remembered.  We reached the summit in what felt like short order.

We walked the short distance to the viewpoint and ate our Whoopie Pies (Desserts on the 48!). 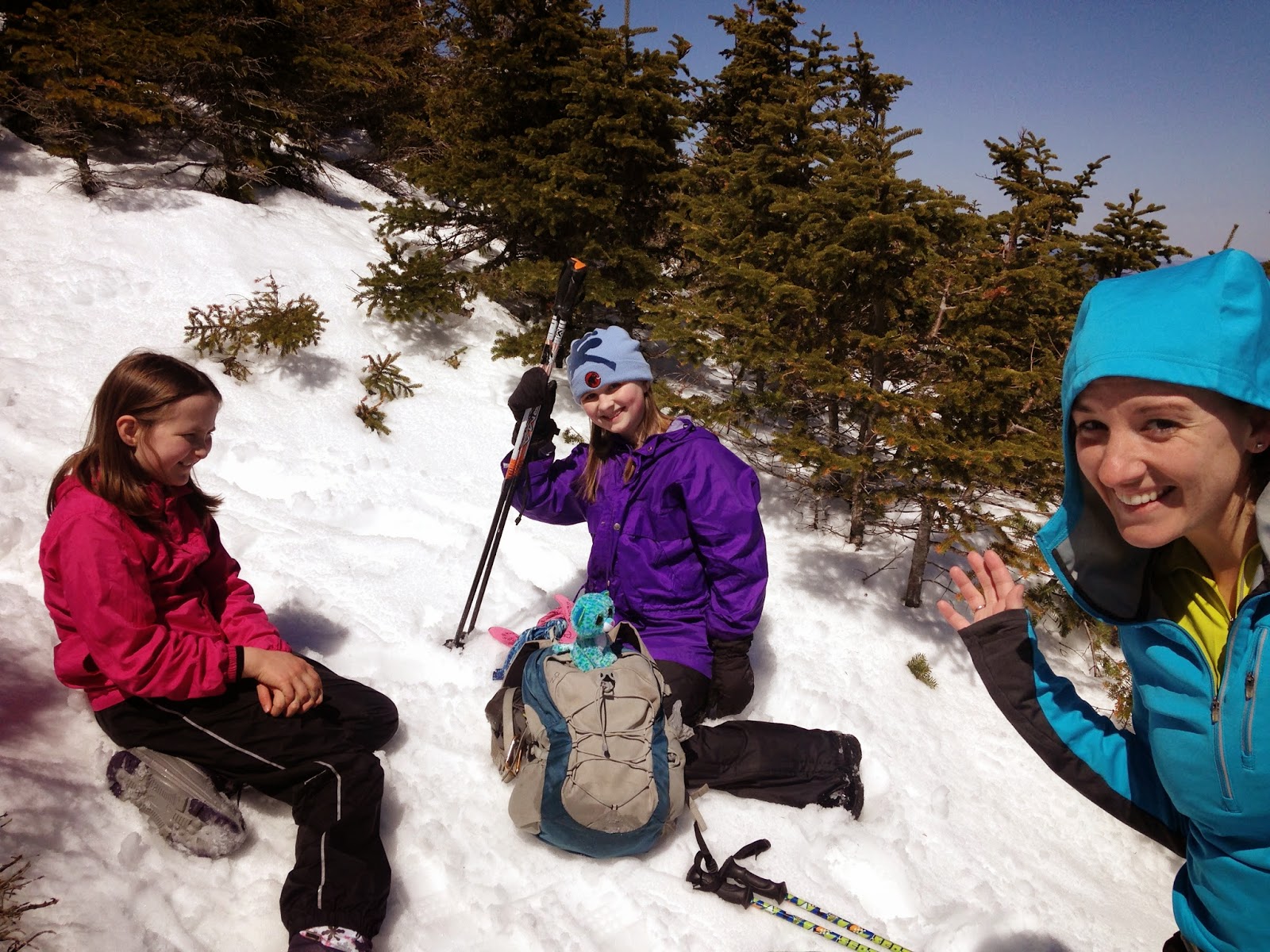 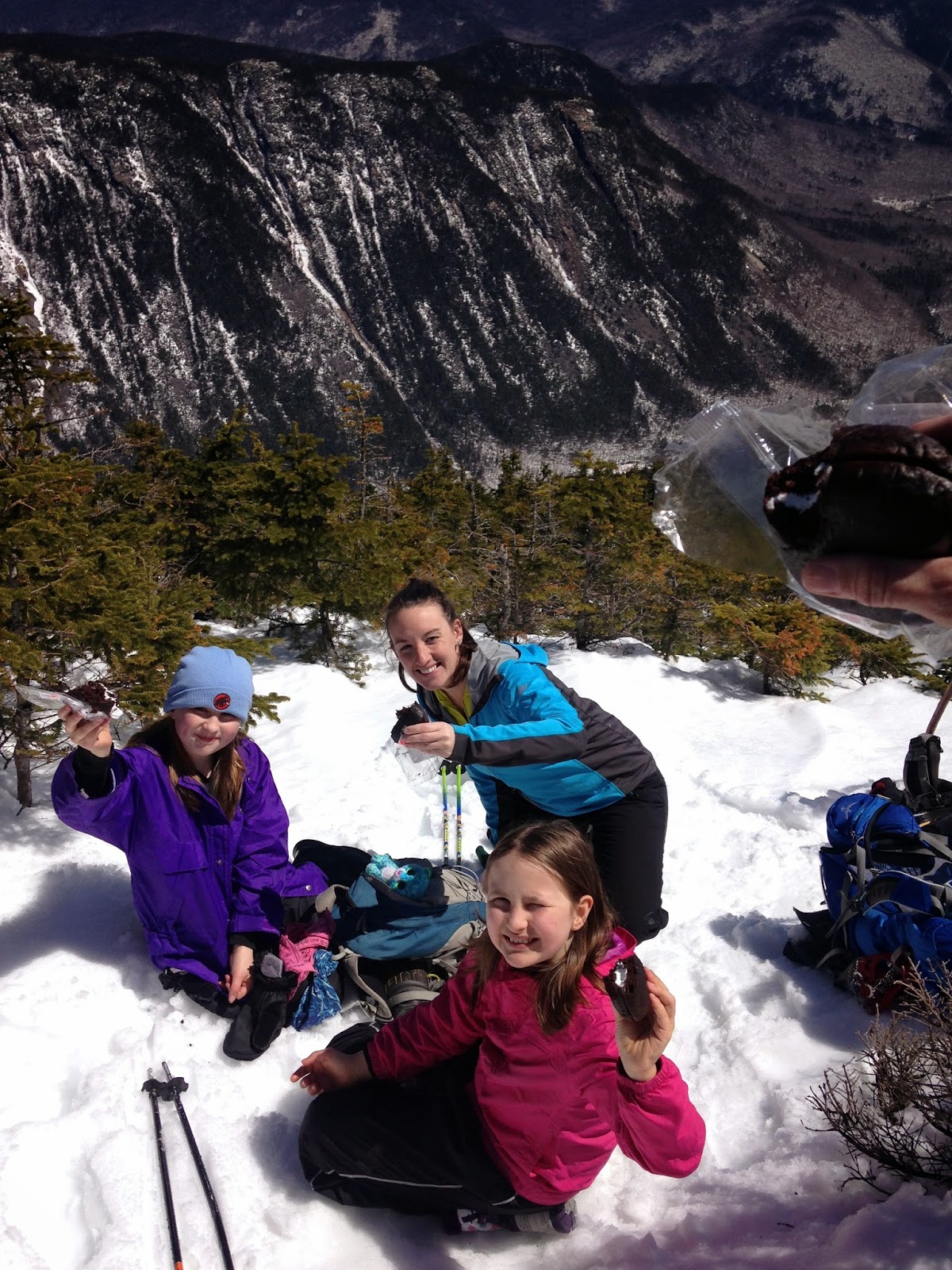 We could not feel the wind from our perch, and the sun was out, and the temperature was perfect...we hung out for quite a bit and ate.  Sage took a mini nap... 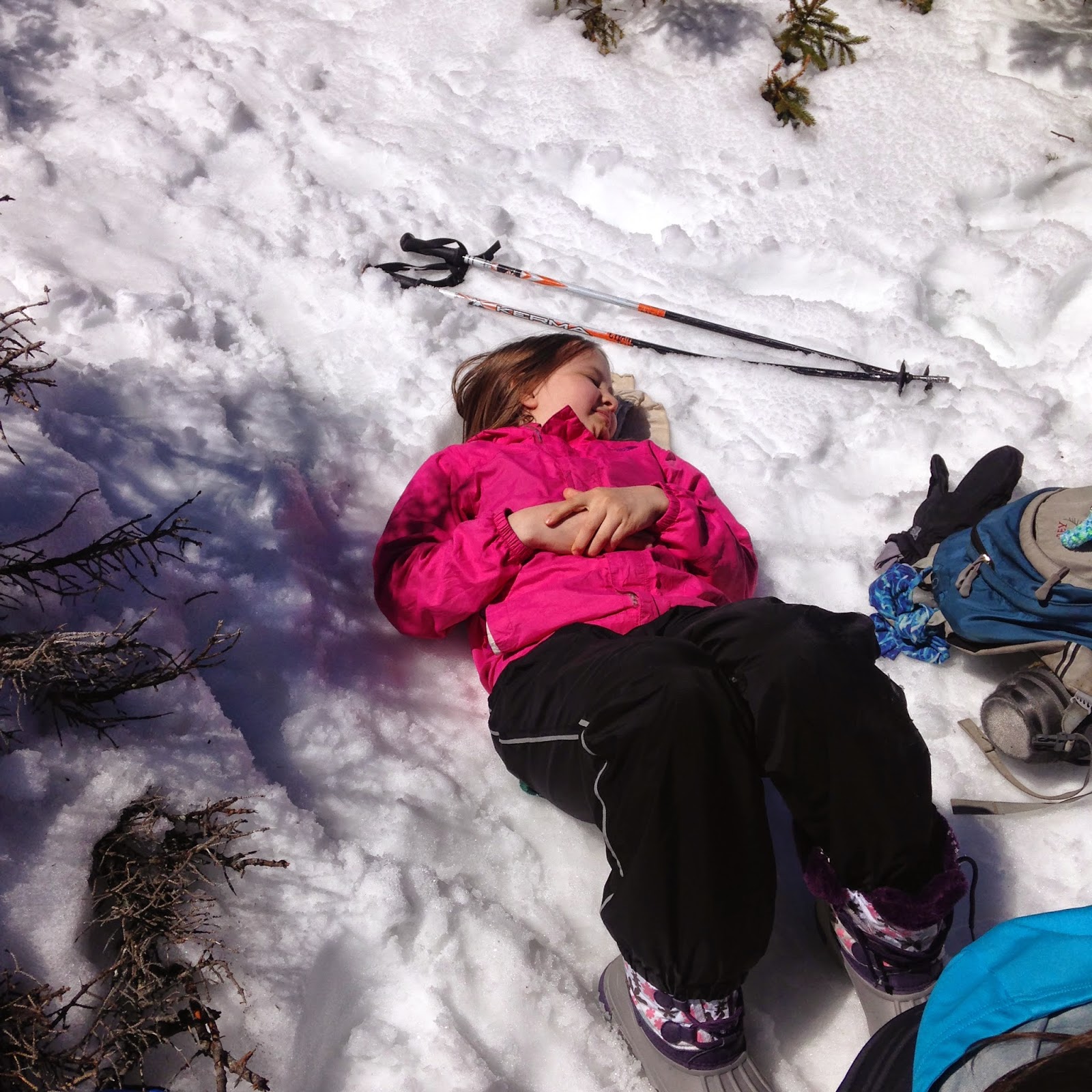 We eventually got up and moved on.


Our friend had followed us from Tom -- we bade him/her farewell before heading down the crazy-steep southern section of Willey. 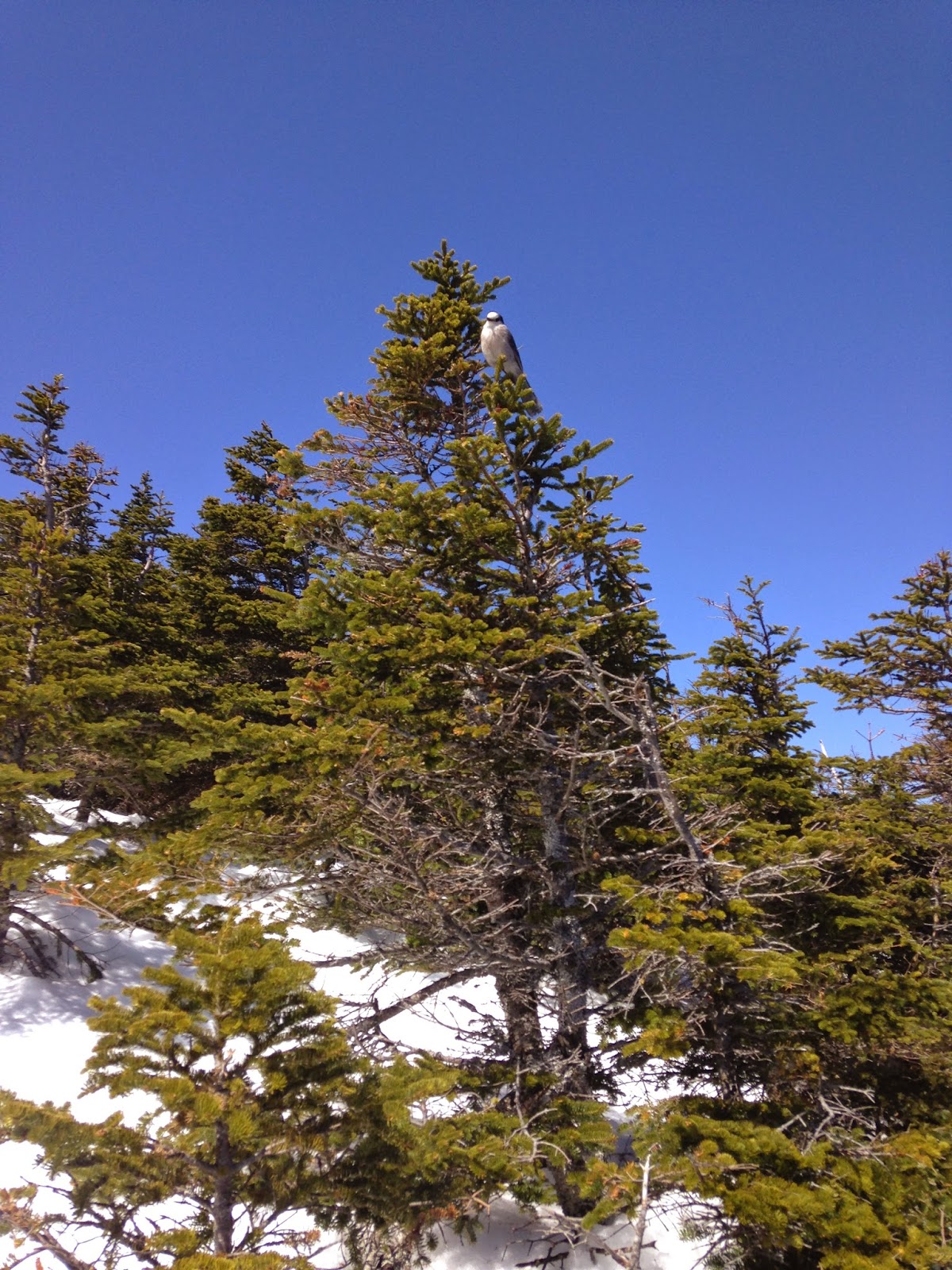 The southern section of Willey is easily managed in the summer and fall, when the ladders are not under a ton of snow and all you have to do is walk up and down well-anchored rungs.  In the winter, however, those ladders are underneath snow an ice.  One must get down and up very, very carefully.  The first time Alex went down this section, five years ago, I made an idiotic mistake and allowed her to go ahead of me on a sled near the bottom of the trail...I thought we were finished with the steep parts...and we weren't.  She ended up going off the most treacherous section a million miles an hour on a sled...luckily she didn't get hurt, but let's just say that wasn't my best parenting moment.  This time around, sleds were banned until we reached the Ethan Pond Trail, and I went first at all times.

We managed this section in the following way -- I went first, crab-walking and slowly sliding, with Alex and Sage directly behind me.  This way, if they lost control, they would simply run into me.  I was almost always firmly anchored somehow (holding on to tree limbs, feet dug firmly into the soft snow, etc.).  Only one part proved particularly tricky...the same part Alex miraculously managed on her sled back in 2010.


Neither Samantha nor I could take photos while descending Willey, since all our attention had to be focused on getting down safely.

Here's a photo I took of one of the ladder sections back in 2008, when Alex and I did this trail for the first time -- this will give you an idea of how steep this section is (and it goes on like this, off and on, for a mile).  Of course, during our hike last Sunday, those ladders were covered in snow...the section turns into a snow/ice chute.


Once on the Ethan Pond Trail, we picked up the pace and made it back to the summer parking area in fine spirits. 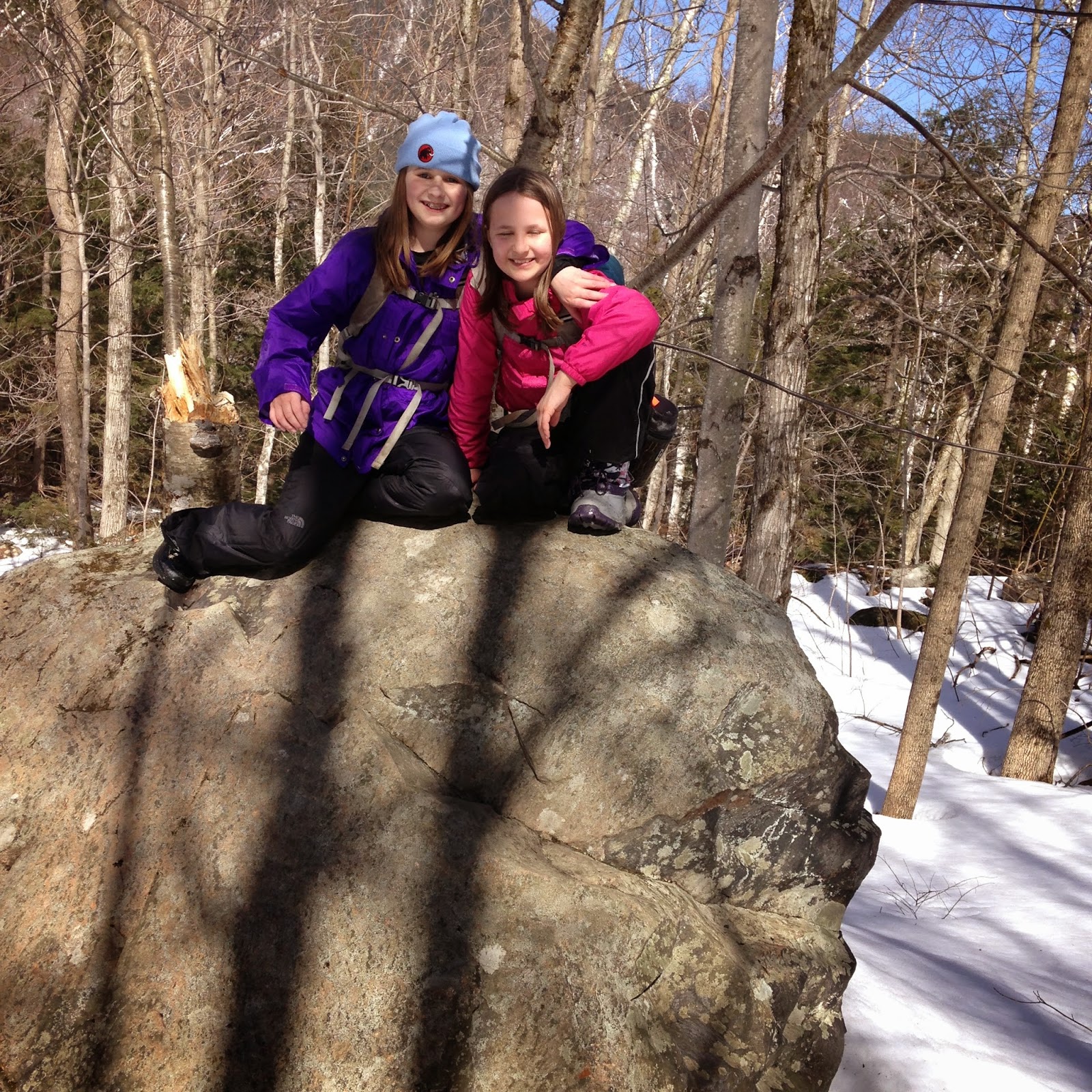 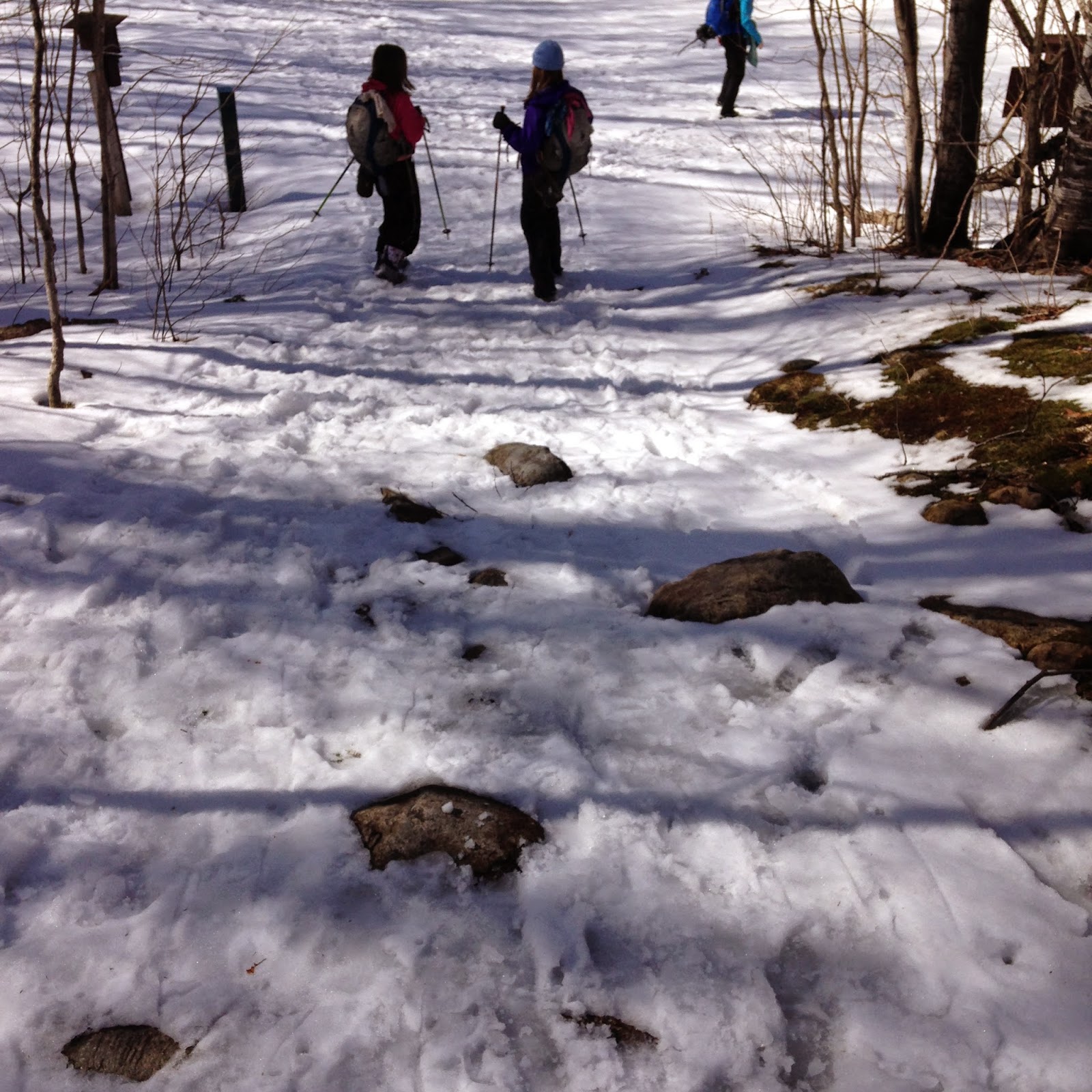 Many thanks to Samantha for her great company.  It's always a pleasure sharing the trails with her!

We hope to hike something this Sunday, so I should have another trip report posted next week.

Happy spring -- enjoy the weather, everyone!
Posted by Patricia Ellis Herr, Alexandra Herr, and Sage Herr at 10:53 AM