Don't forget, folks -- we're fundraising for Feeding America, and we've still got a few hundred dollars to raise, so if you can afford to donate, please do!  Thanks!  We've only five weeks until the John Muir Trail, and we'd love to meet our fundraising goal before we leave New Hampshire.

Though the views from the summit ledges are lovely, I don't think I'll ever do this one again.  The trailhead is far, far, north along a bumpy forest service road and the trail feels like an unrelenting slog straight uphill.

I'm happy to report that we made short work of this unremarkable trail -- we were up and down in two and a half hours (including snack time on the summit), which is far less than adult book time.  The girls have been hiking faster than adult book time for a while now, but I'm still surprised when we finish earlier than I expect.  As has happened on previous hikes, they had to stop and wait for me on some of the steeper bits as I huffed and puffed my way up.  They're carrying everything they'll carry on the JMT now, so their speed and stamina are good signs of their ability to handle and enjoy our upcoming thru-hike.

The trail begins by a cabin along Nash Stream Road, a little over eight miles north of Emerson Road in Groveton. 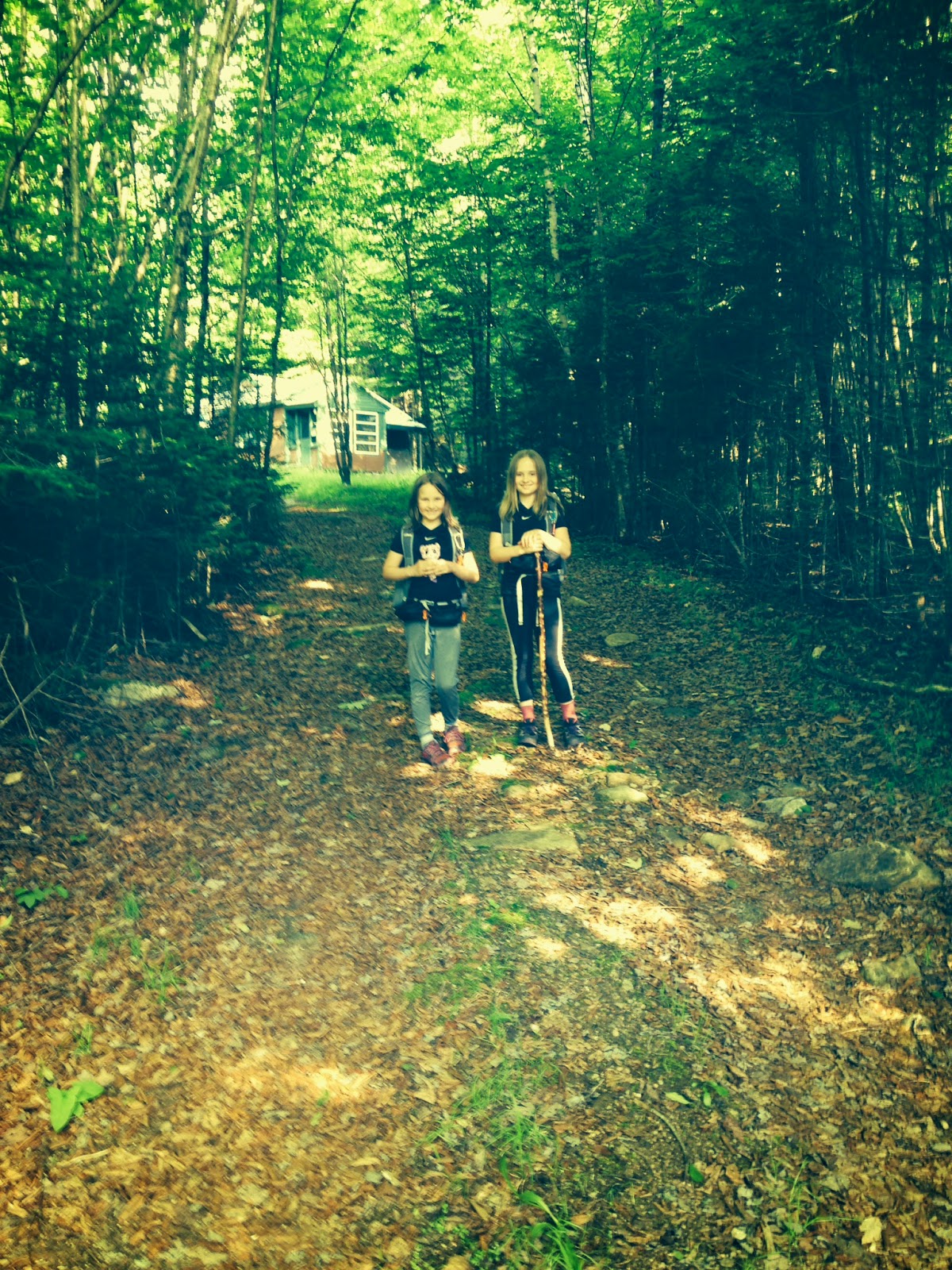 The trail goes to the left of the cabin and around a gate... 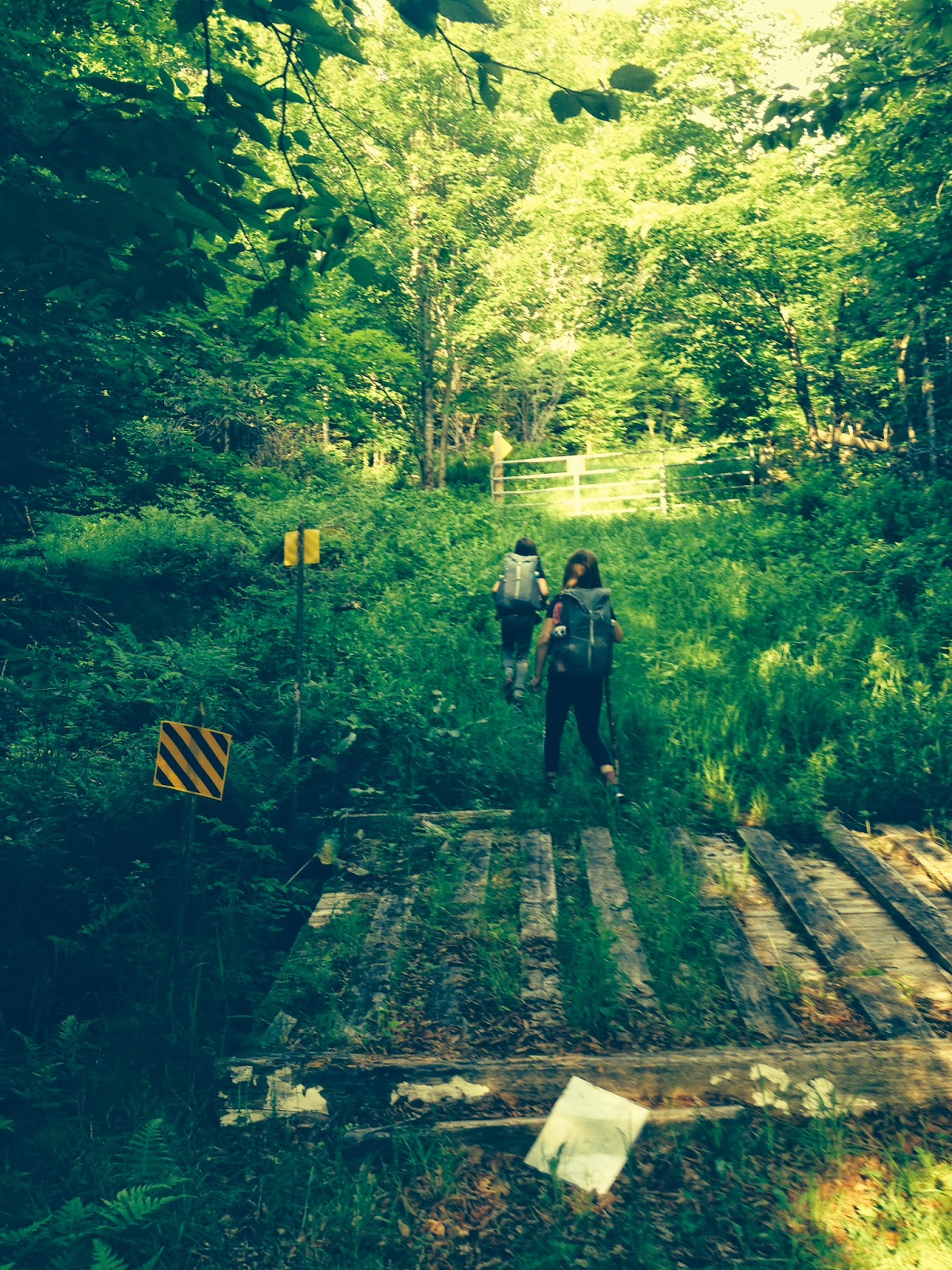 ...before heading into the woods. A tenth of a mile in, there's a sign at an intersection.  Take the left for the Cohos Trail and the right for Sugarloaf Mountain. 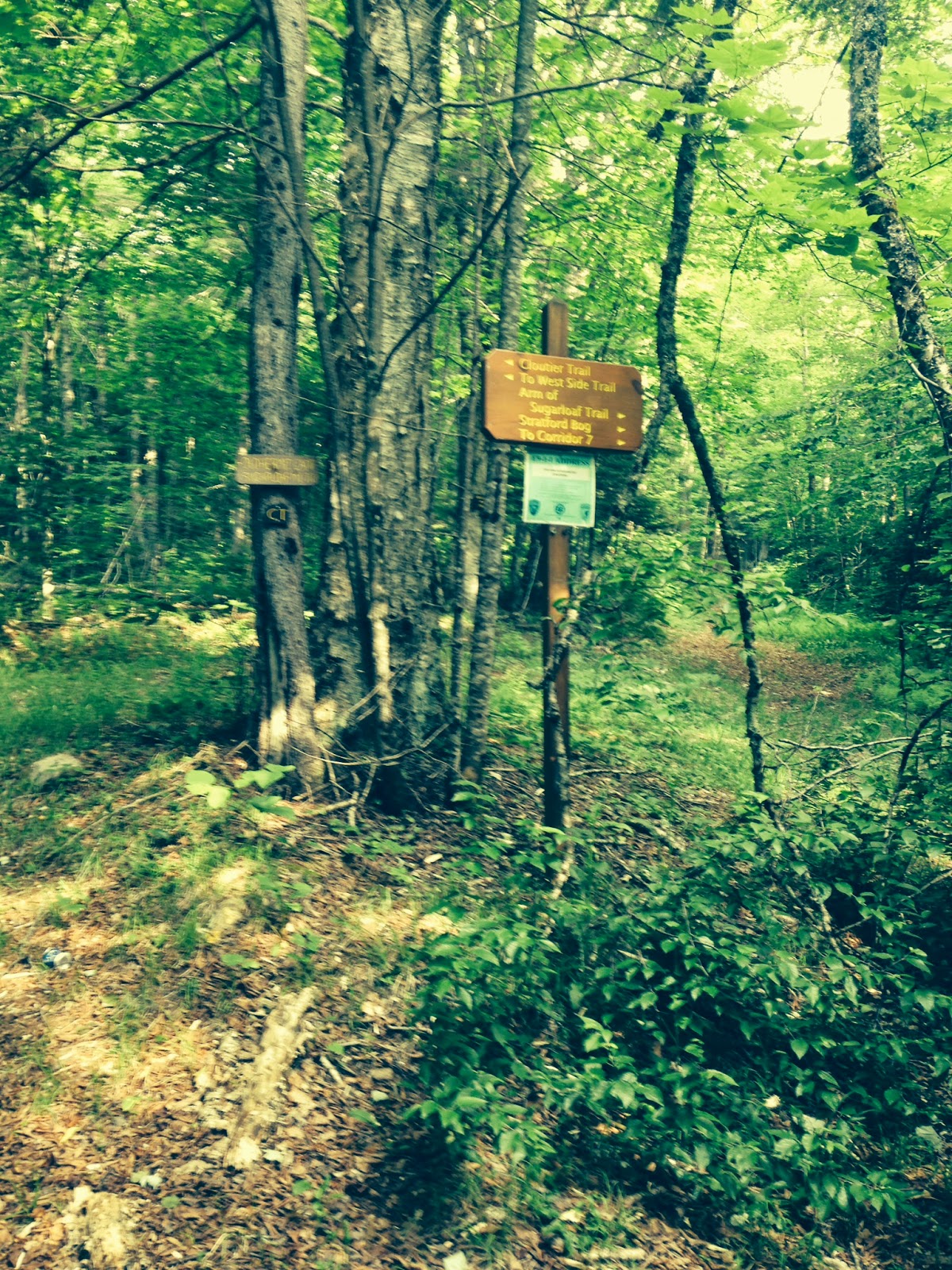 The trail then looks like this (but much steeper) all the way up to the remains of the fire warden's cabin at 1.6 miles. 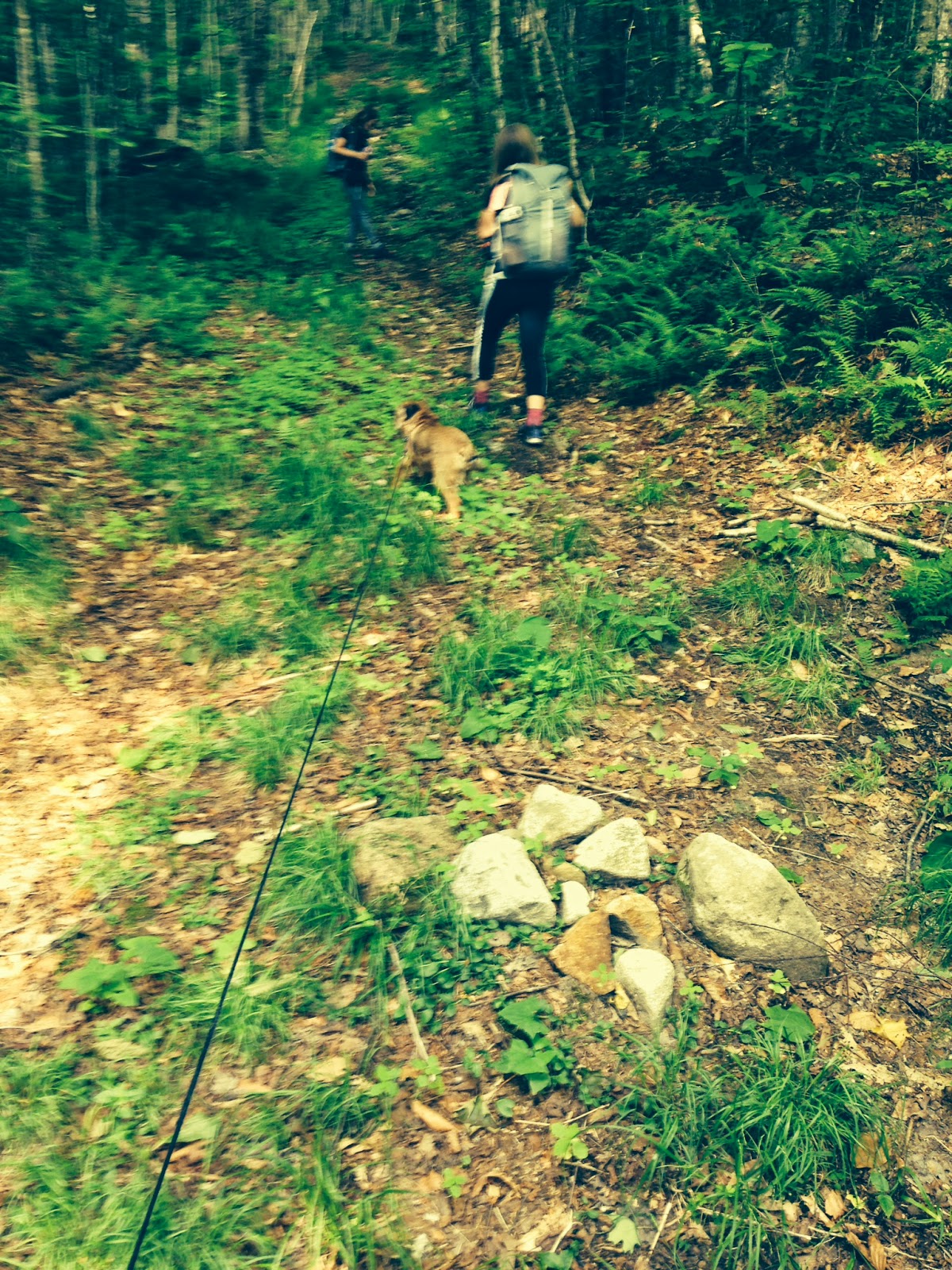 The trail levels off a bit just before reaching the clearing with the cabin. 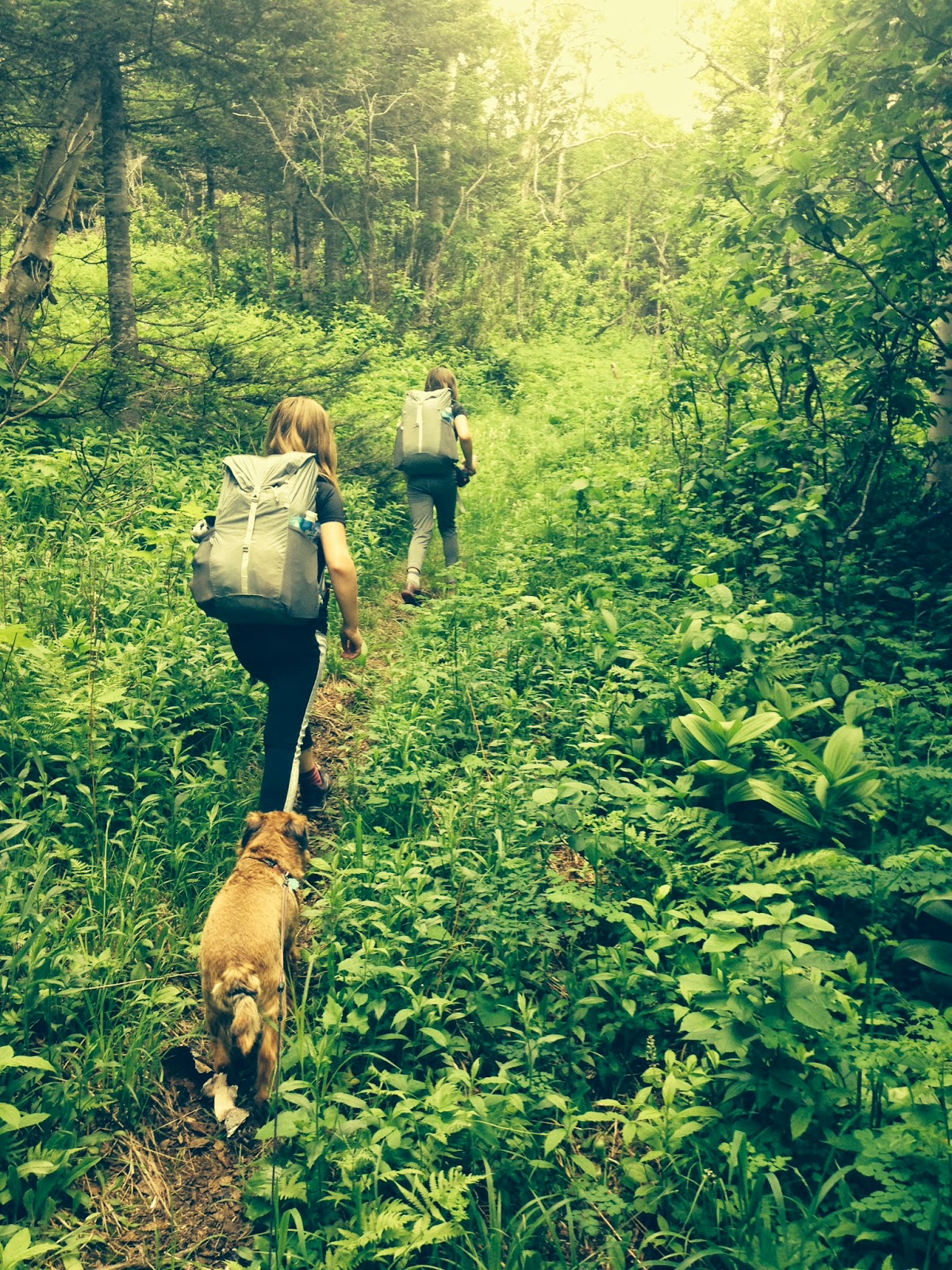 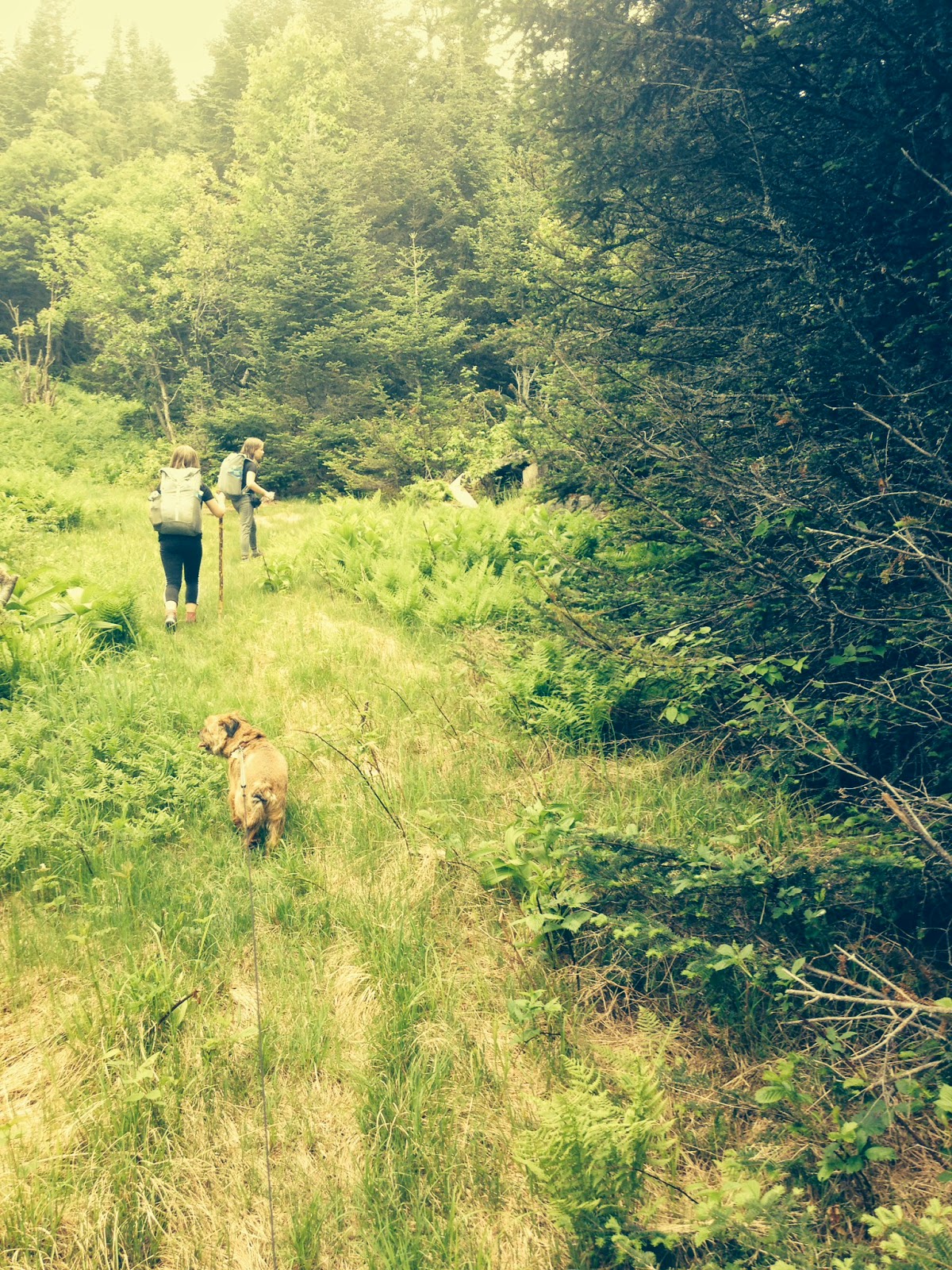 The cabin is in poor condition... 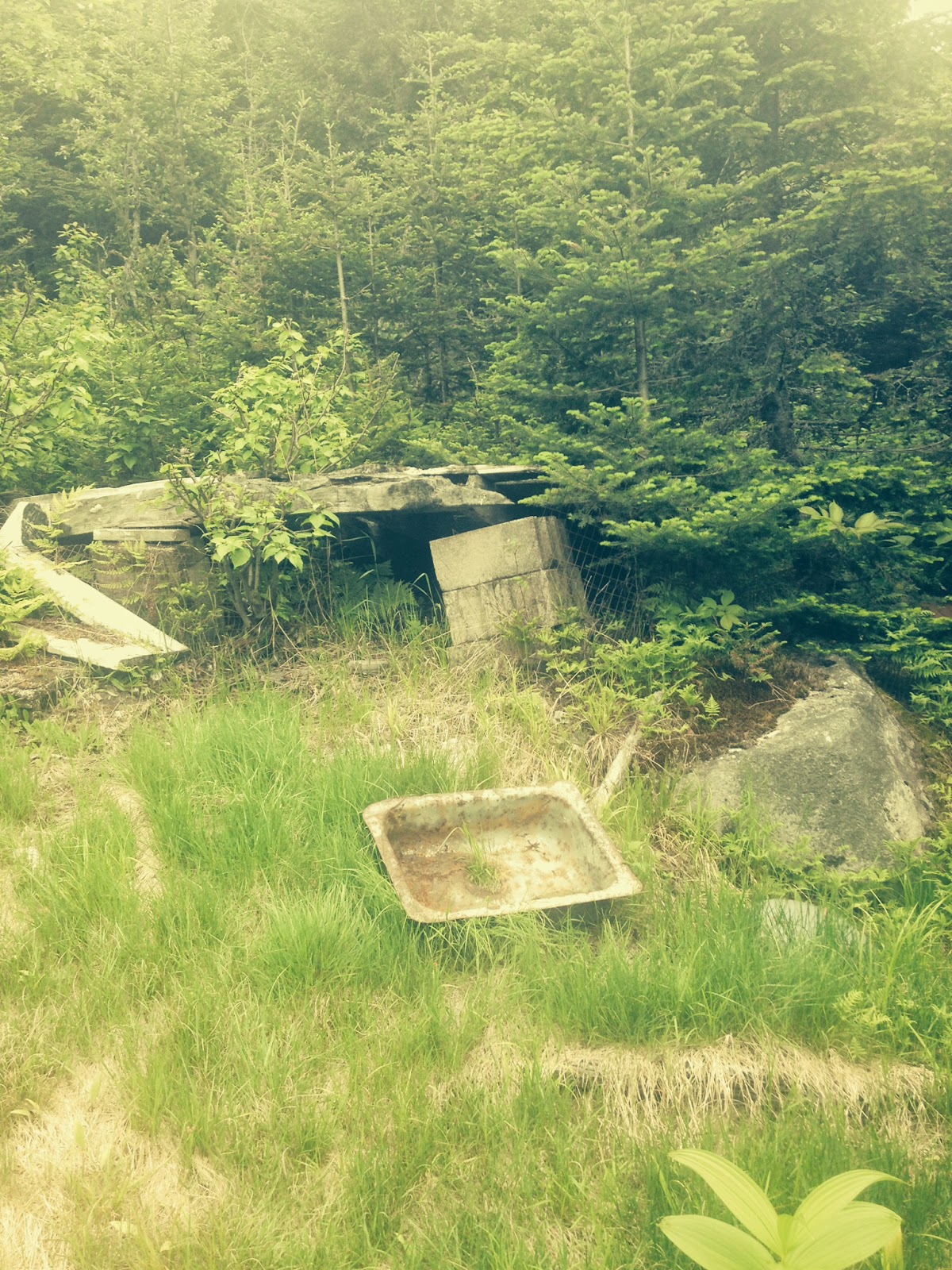 From here, the trail heads back into the woods... 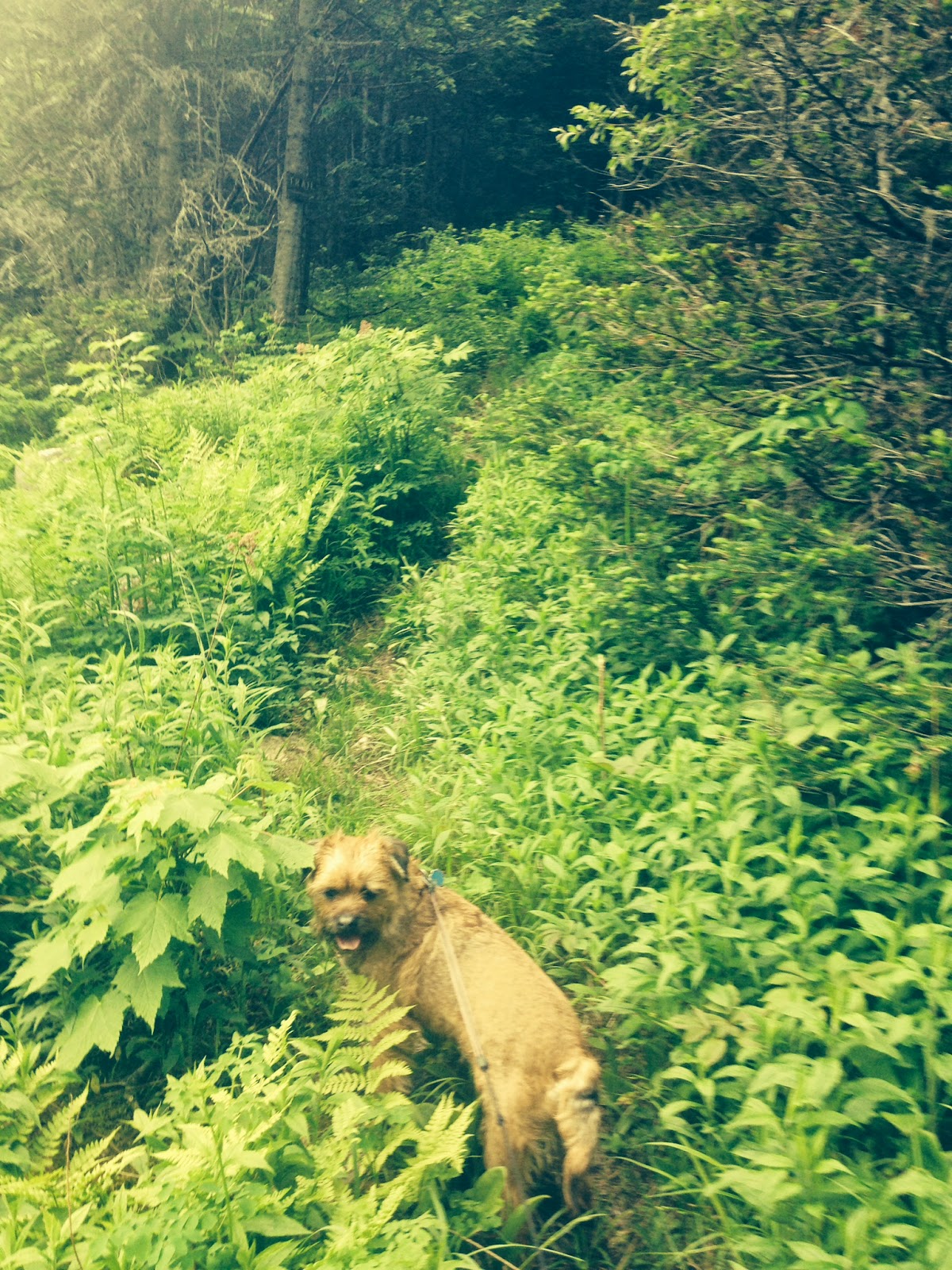 and ascends another half a mile (sometimes steeply) to the summit ledges. 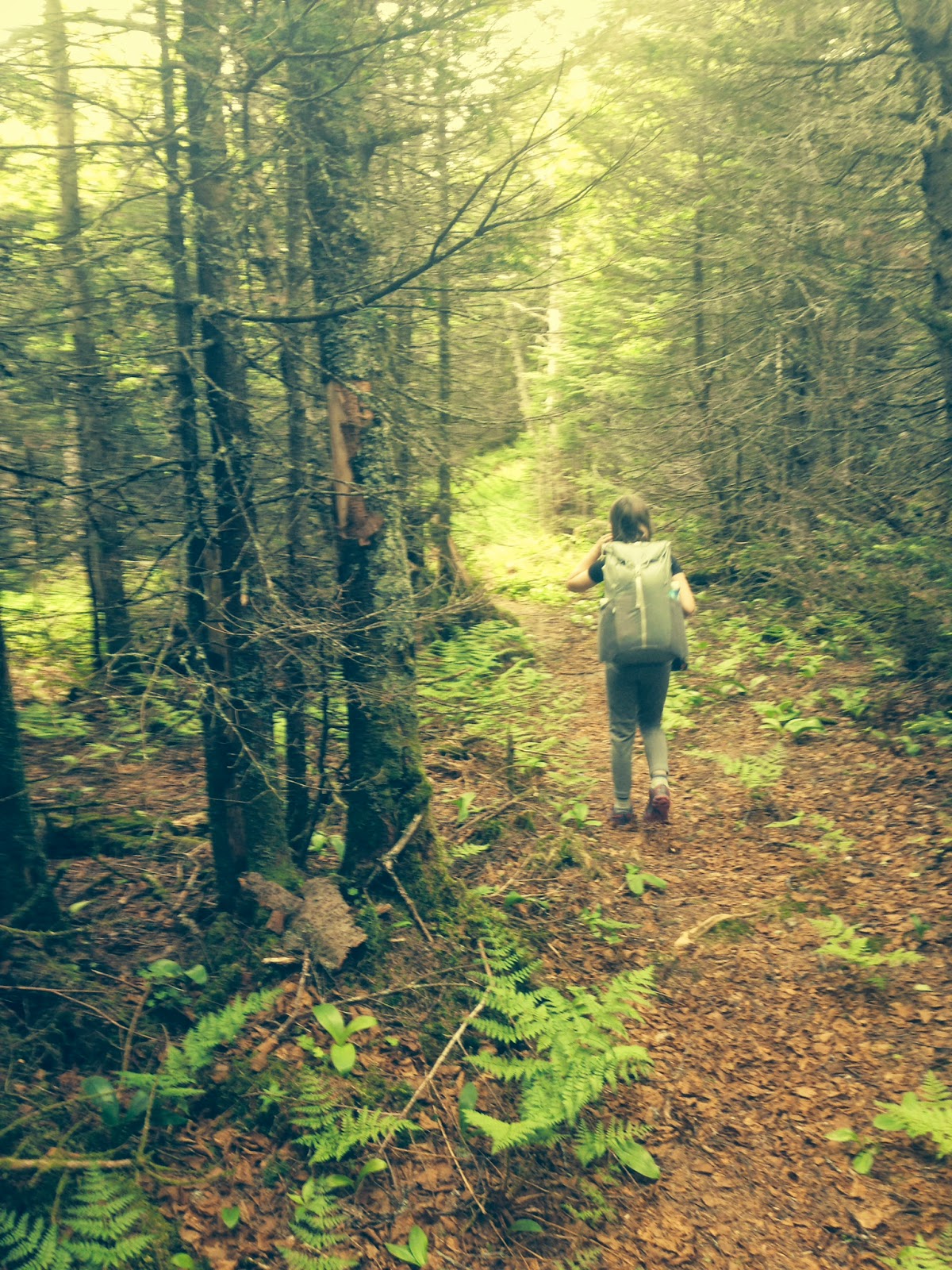 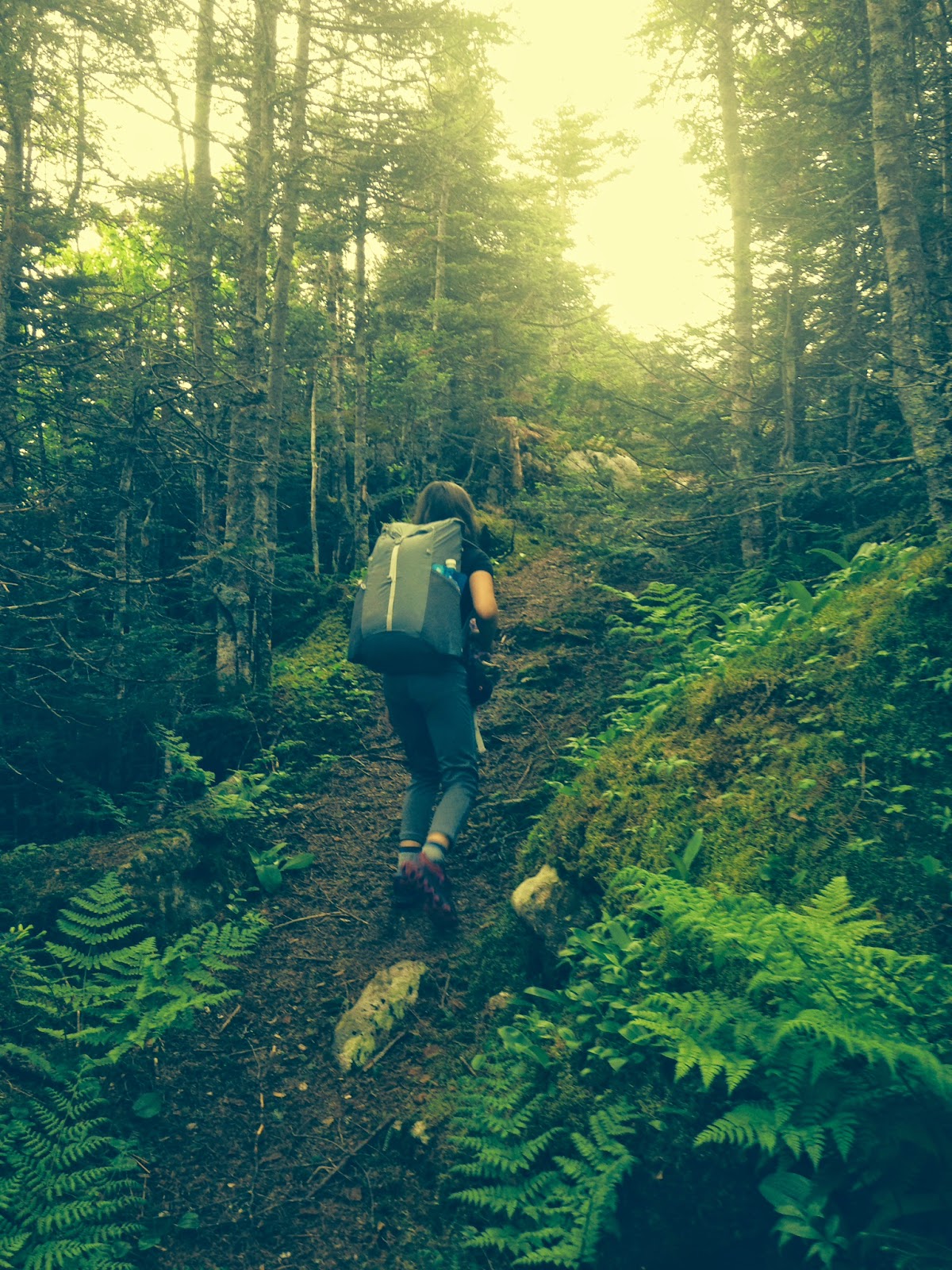 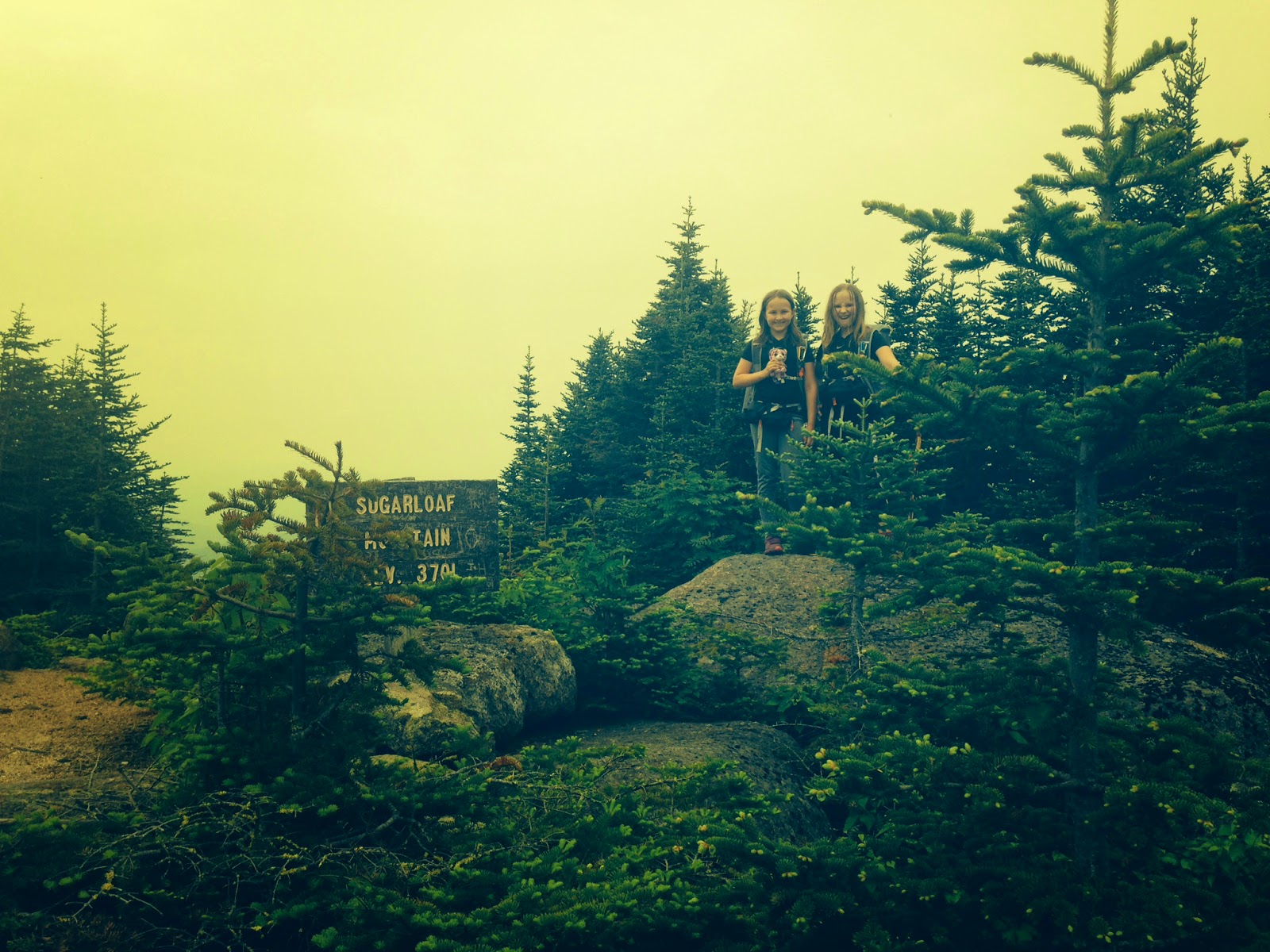 Our views were one-directional.  The day was warm and humid, as you can probably tell from the haze. 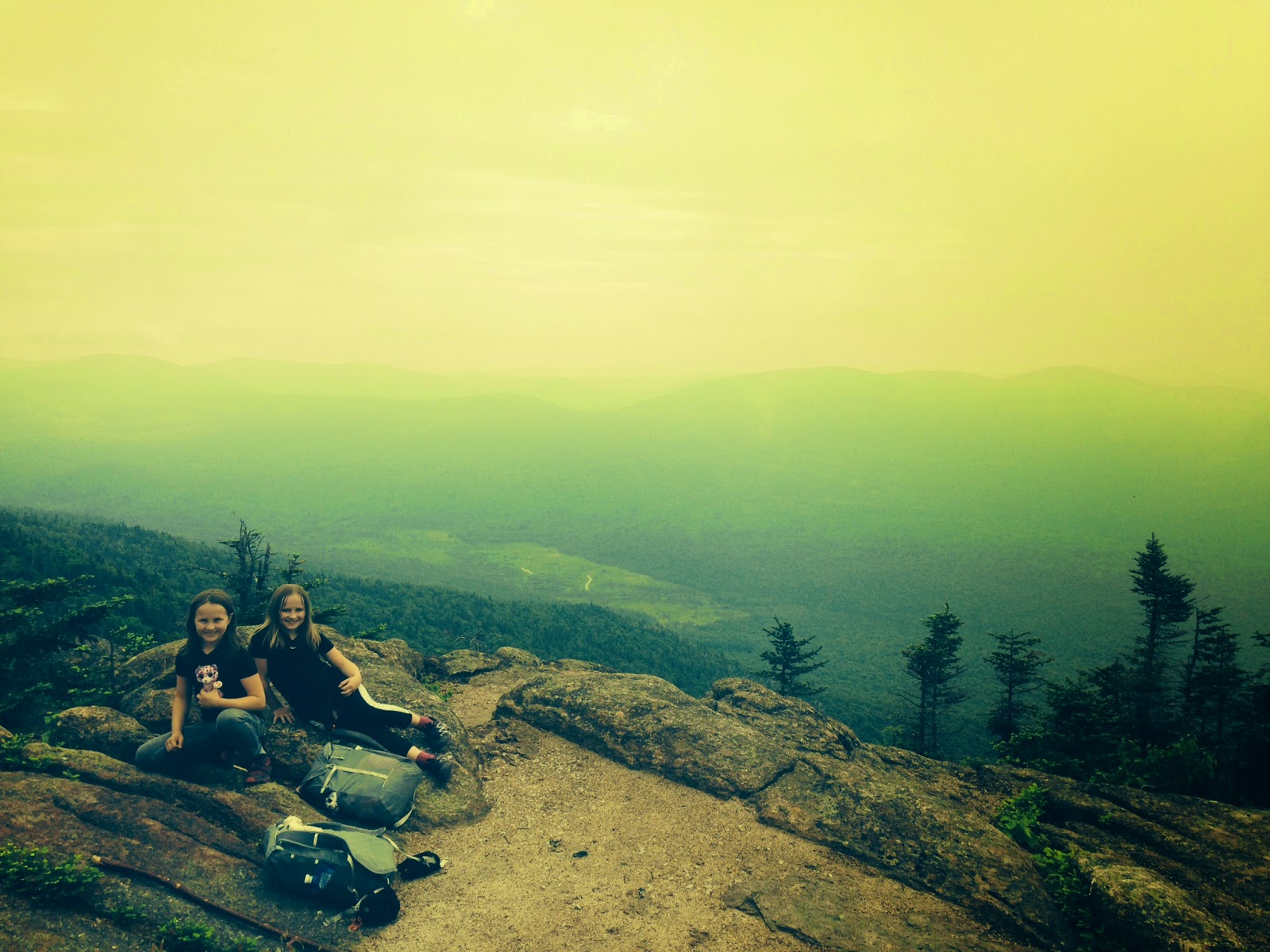 This was a nice exercise hike, but I'm glad we've crossed it off Sage's 52WAV list.  It's not my favorite peak in the world.  I don't mind straight-up slogging if there's water to cross or interesting boulders to see, but this trail felt rather bland.  It's well-maintained, though, so folks looking to bag this peak shouldn't have any trouble doing so (thanks, trail workers!).

Alex and Sage returned from this hike and went to karate class for two hours, where they earned new belts (congrats, girls!).

Our next hike was supposed to be today -- right now, actually -- but the forecast calls for major thunderstorms and heavy rains all over the Whites, so we must postpone today's adventure.  We're on a tight schedule, so we may have to use of the girls' karate days to fit in all the peaks we want to do before we leave.  I'd like to not let that happen, though, since Alex and Sage love karate and their classes are important to them...this summer is a whirlwind of juggling between homeschooling and hiking and karate and playdates and camp and outings with the girls' clubs....it's difficult to make up hiking days.  Still, better to figure it out than to go today and get struck by lightning.

Our next hike is Sunday.  We may do an overnight, so I might not write another trip report until late Monday evening.

Have a good weekend, folks!

Posted by Patricia Ellis Herr, Alexandra Herr, and Sage Herr at 6:36 AM