FIRST -- many, many thanks to Jim and Jackie St. Cyr and Plymouth Regional High School's Spanish 3 class for their donations to Feeding America!  Alex, Sage, and I greatly appreciate their generosity - we are now almost to our fundraising goal!  If you too can help, click here -- remember, every cent goes directly to Feeding America.

We are now in training for the John Muir Trail, which we'll hike in August.  Our training plan consists of hiking Sage's remaining mountains on the 52 With a View list and Alex's remaining mountains on the Trailwrights' 72 list.  Before we leave for California, Sage will likely finish the 52WAV and Alex will probably get all but two of the Trailwrights' peaks.  We'll hike the remaining two TW72 peaks in September.

In other words, between today and the end of July, we hope to bag at least 21 mountains.  Today, we did Mt. Hayes, a moderate 52WAV hike just north of the Carter Range.

Hayes has easy-to-moderate grades, which is just what we needed to ease into our training regimen.  Our new, ultralight backpacks have not yet arrived, so we used our old ones and included enough gear to make the weight approximate to what we'll carry on the JMT, minus food.  We'll build up to fully weighted packs during the next few weeks.

Here are the girls in front of the trailhead.  We initially walked right past the entrance to the trail; some locals out for a walk turned us around and showed us the way.  FYI, this entrance is less than a tenth of a mile from where you park (on Hogan Road, across from the hydroelectric dam), and it's directly across the dirt road from a large sign warning of thin ice. 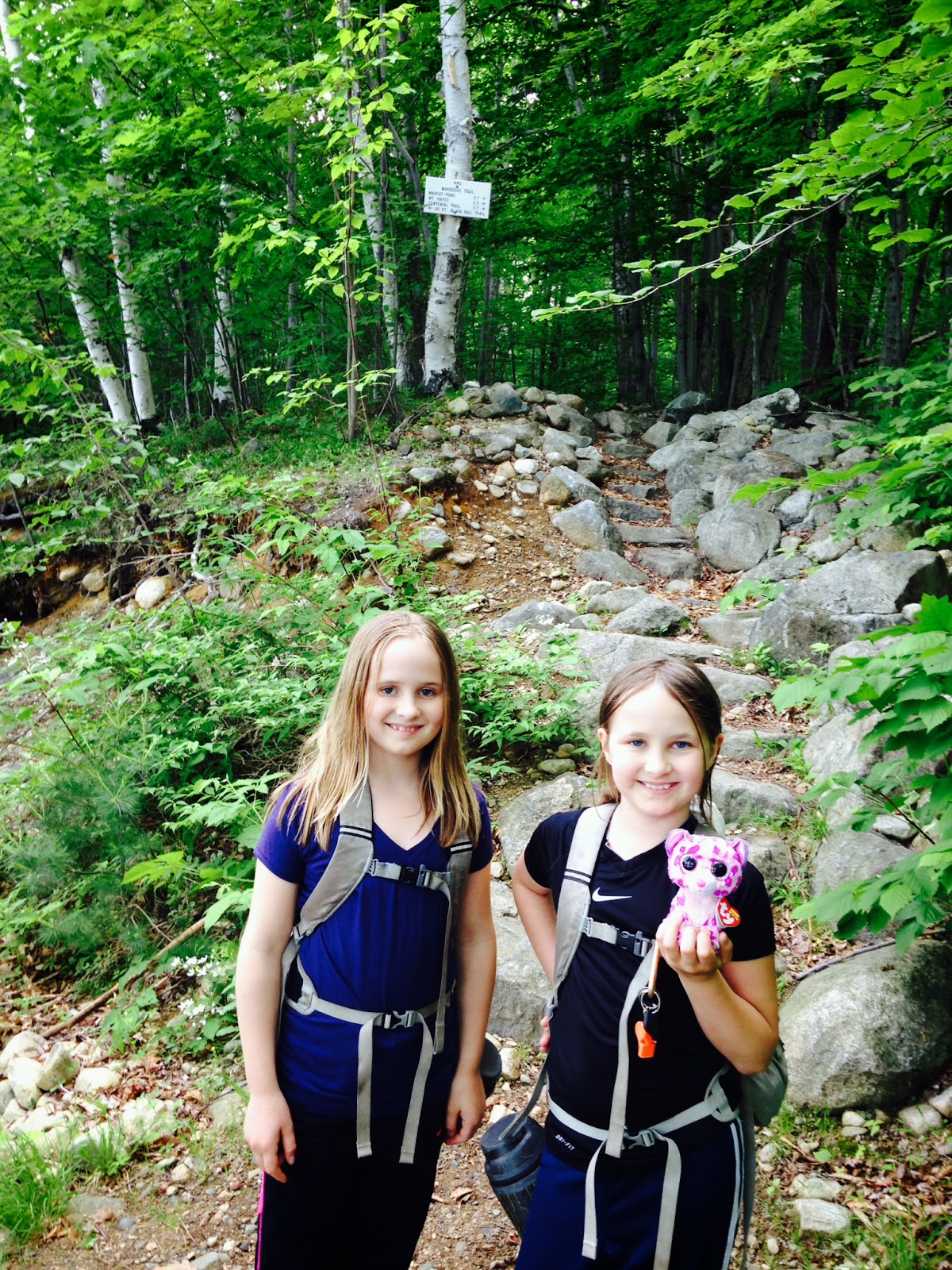 The trail goes up a short while through the woods, then crosses this open area underneath the power lines. View from the open area, between tall bits of vegetation... 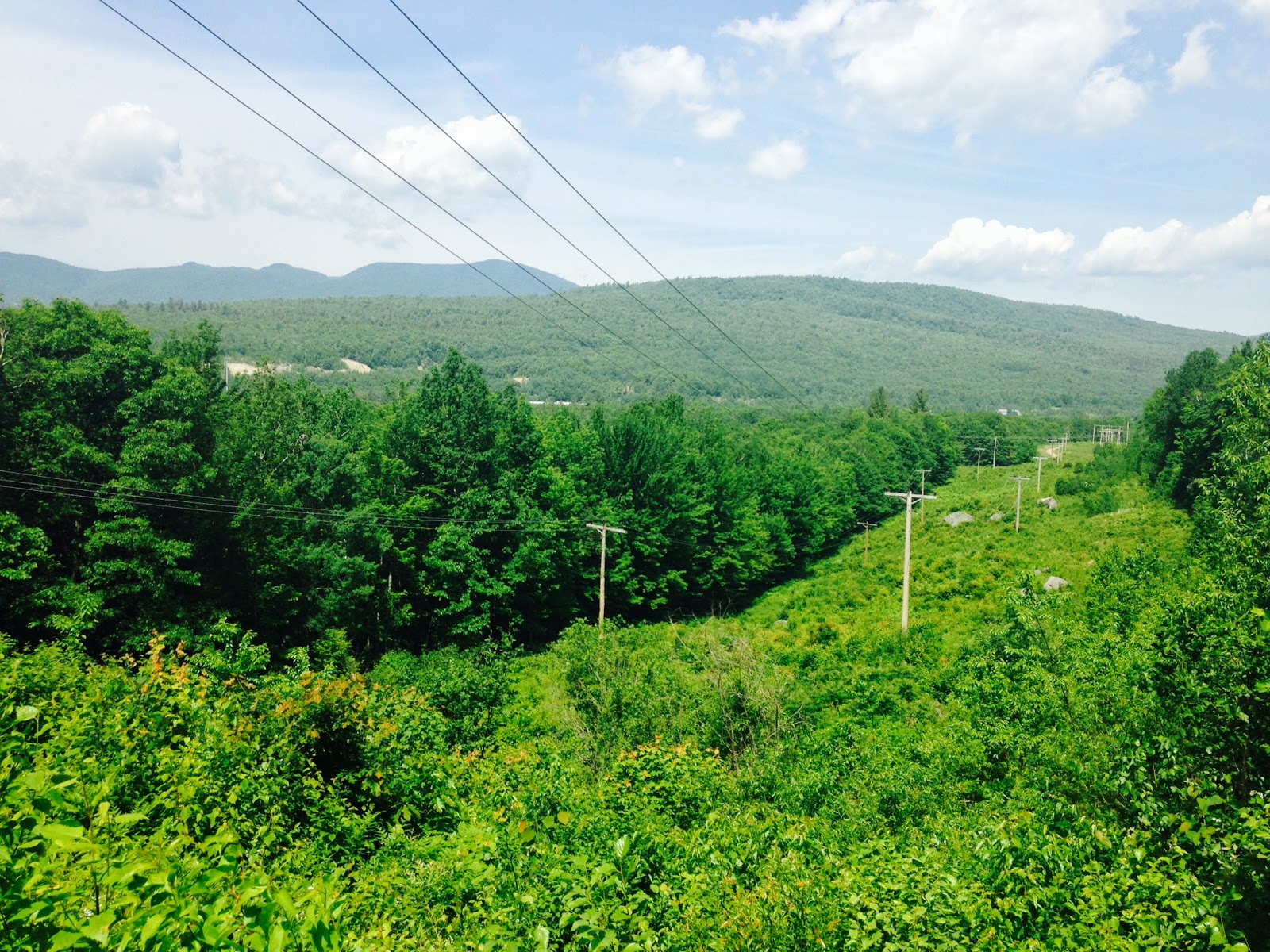 After heading back into the woods, the trail maintains a fairly easy-to-moderate grade. 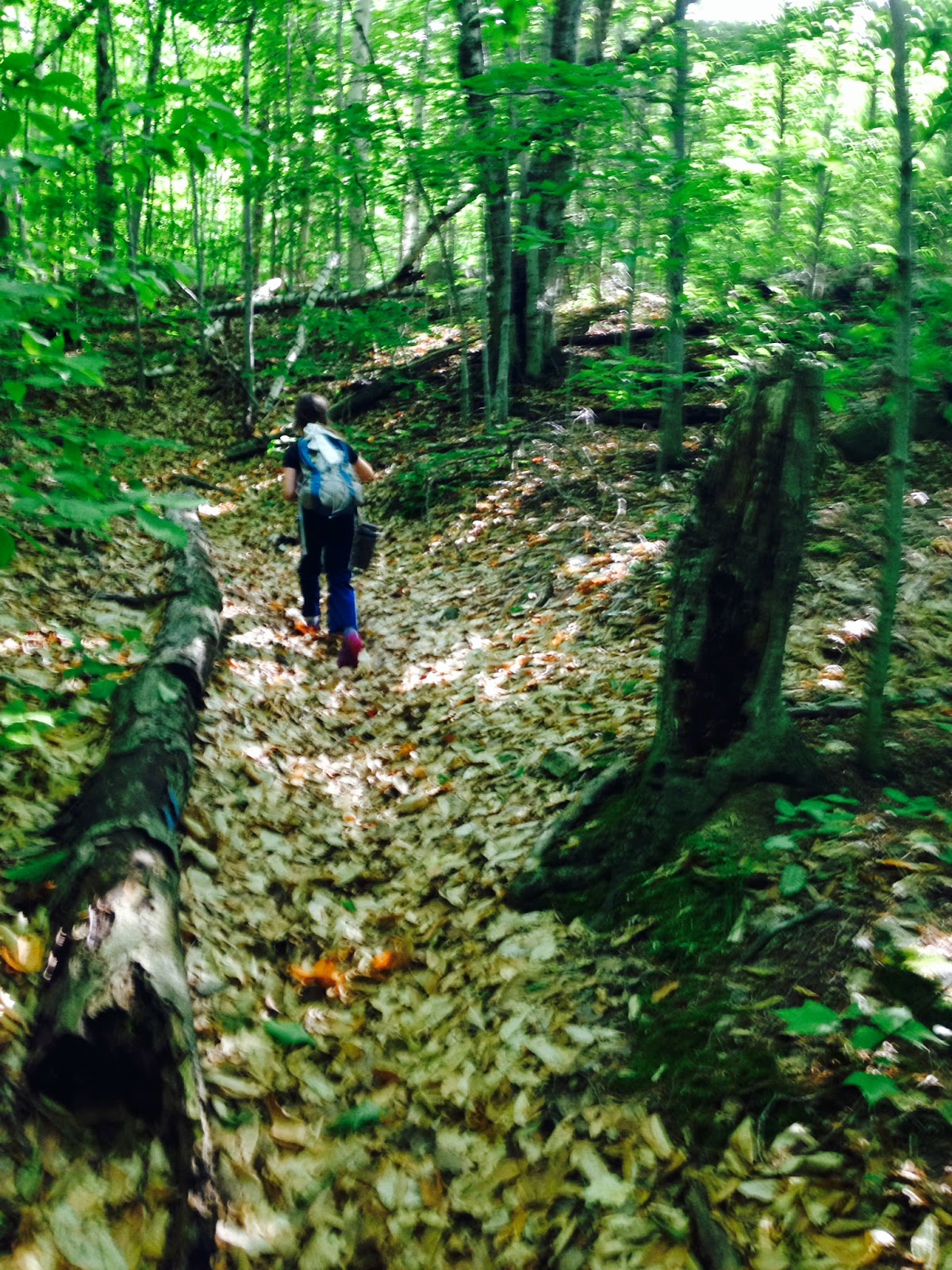 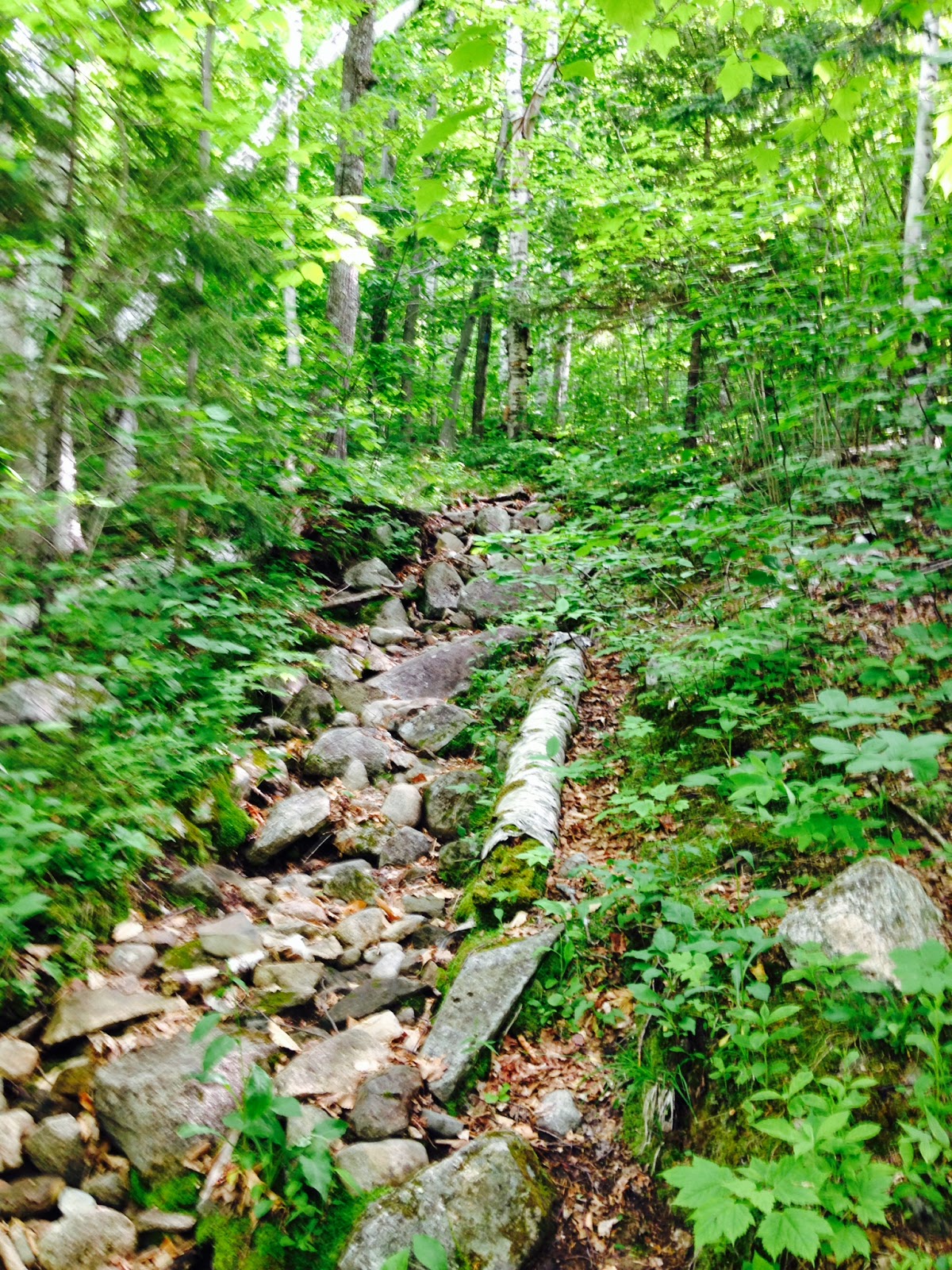 About an hour after leaving the trailhead, we reached the first ledges, which are a few tenths of a mile or so from the summit.  We didn't stop at this point; instead, we waited until we were on the way back before we rested and enjoyed the views (photos below). 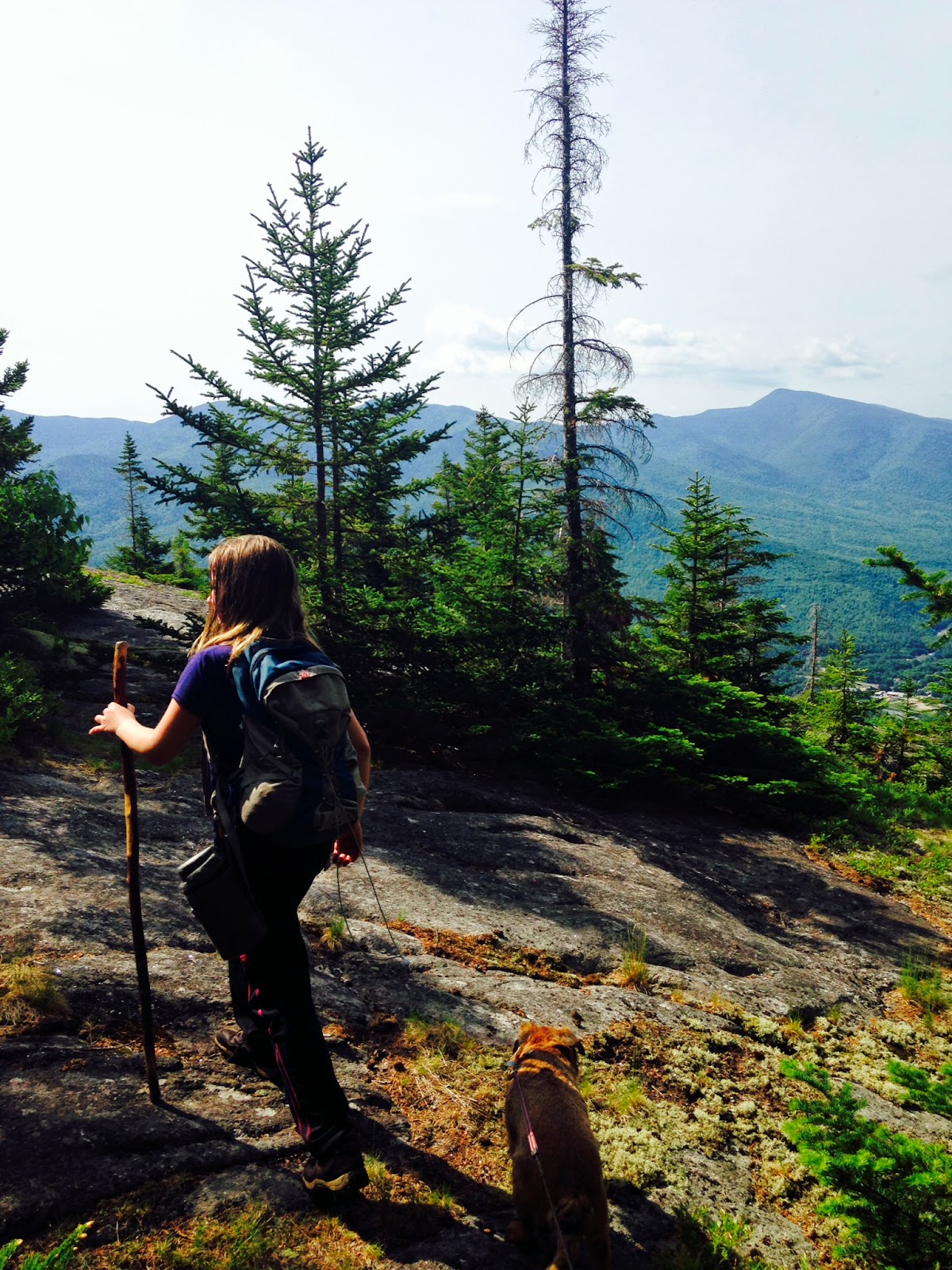 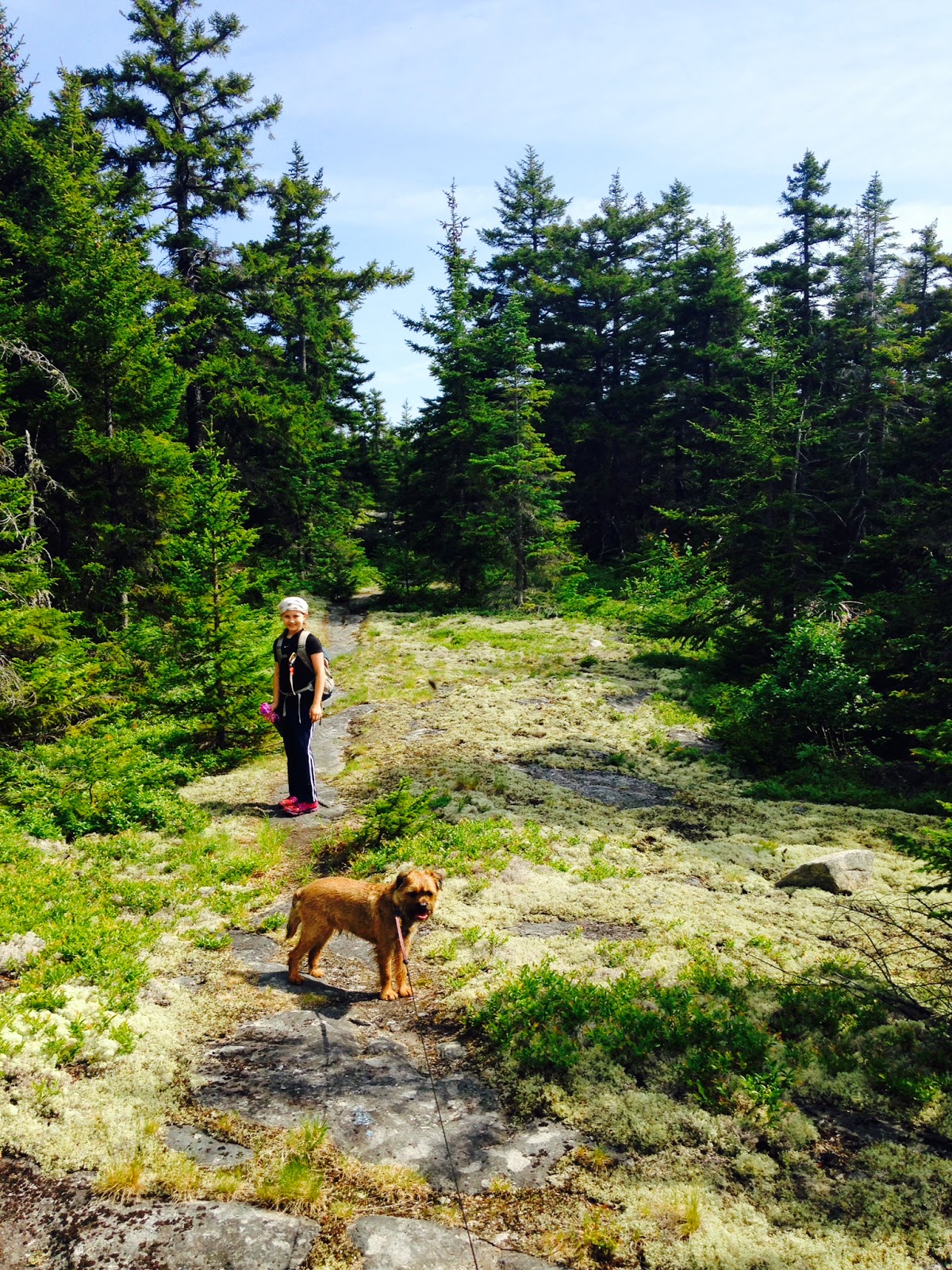 We hiked over a few ups and downs and passed by a few cairns that seemed to mark the summit, but we weren't sure of the location of the official high point.  We therefore wandered all around until we reached the intersection with Centennial Trail (past the official summit). 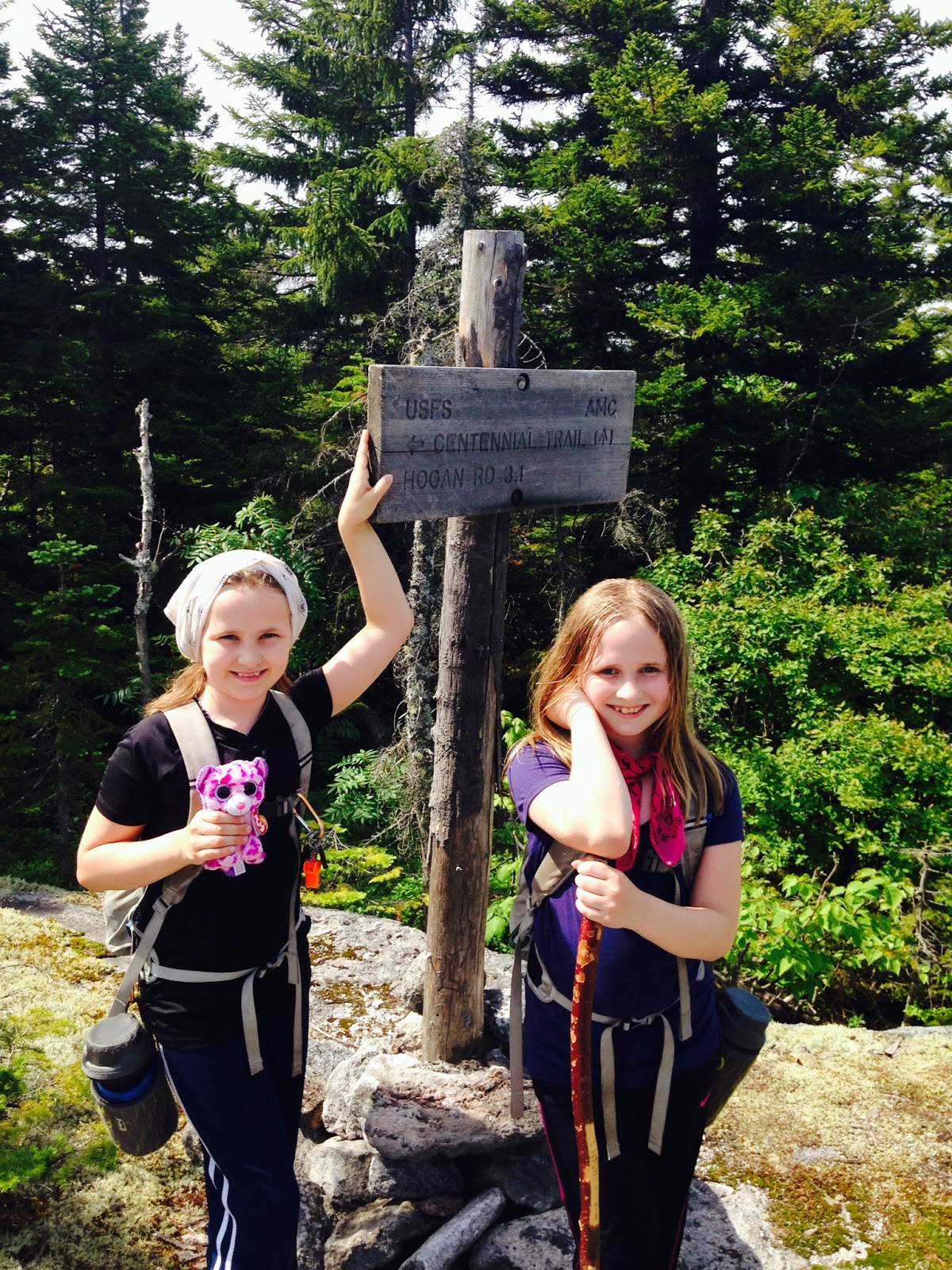 We then wandered back to those southern ledges... 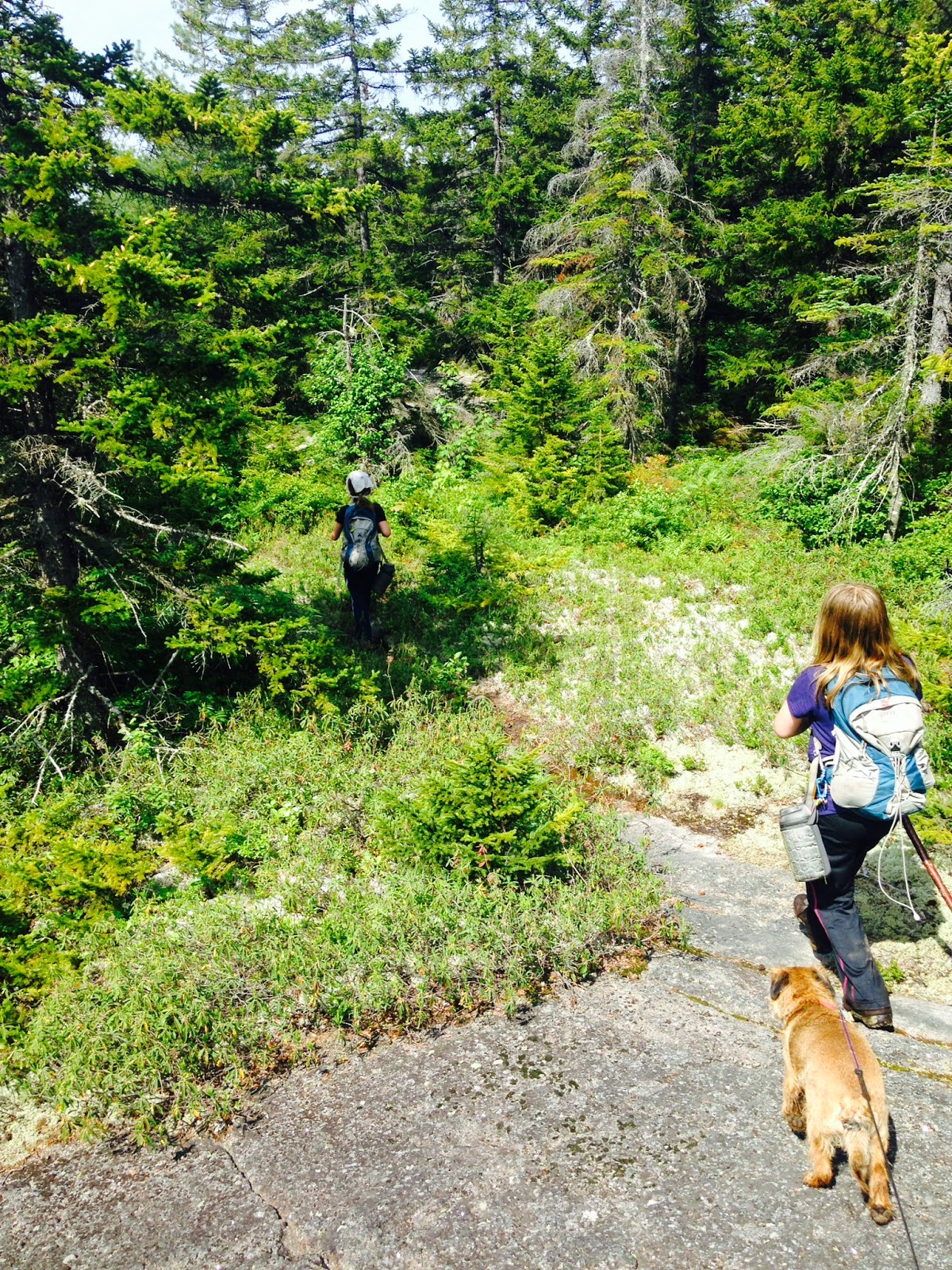 ...and hung about for a while. 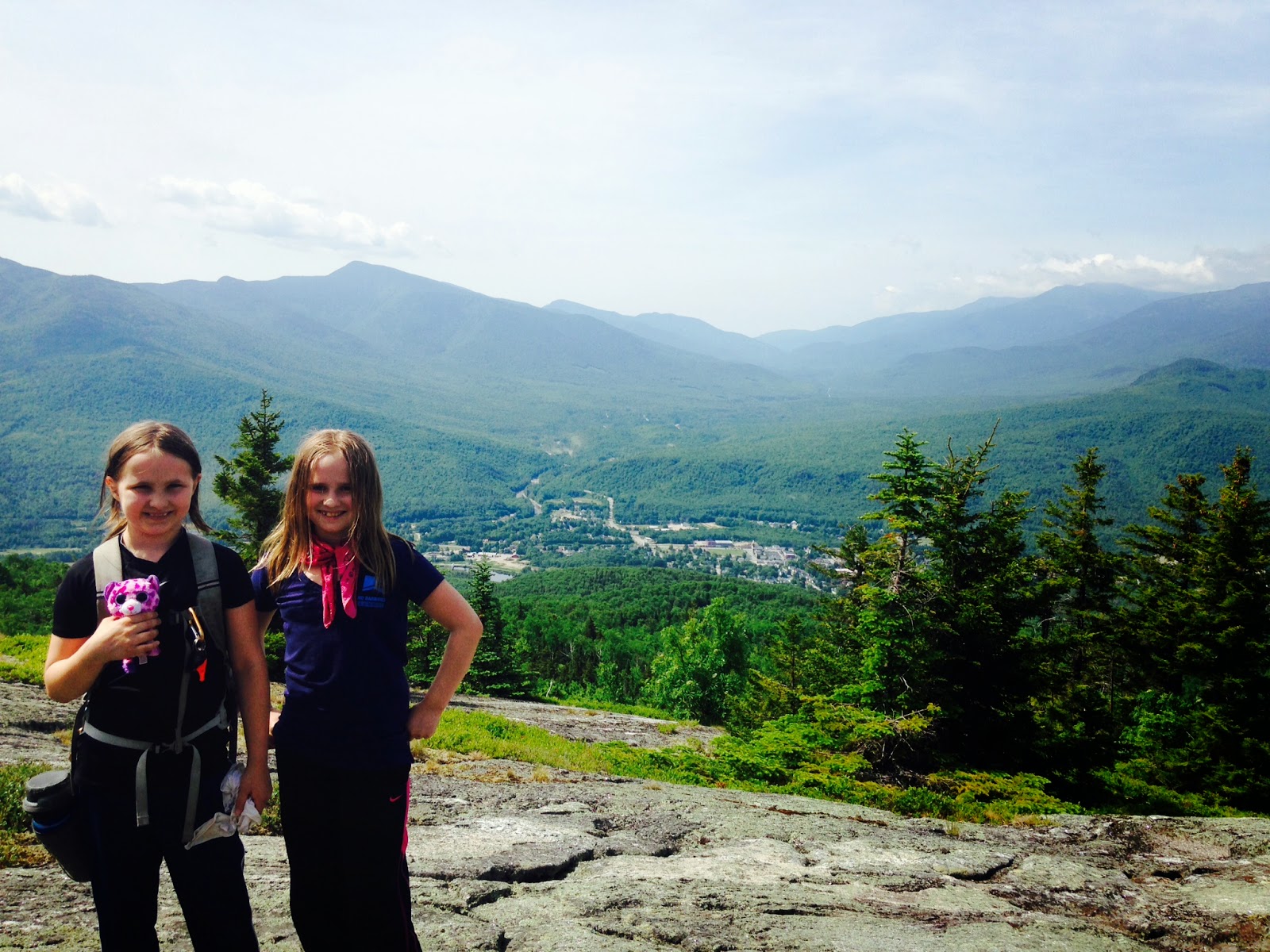 We ate, we drank, we enjoyed the views...and then we descended. 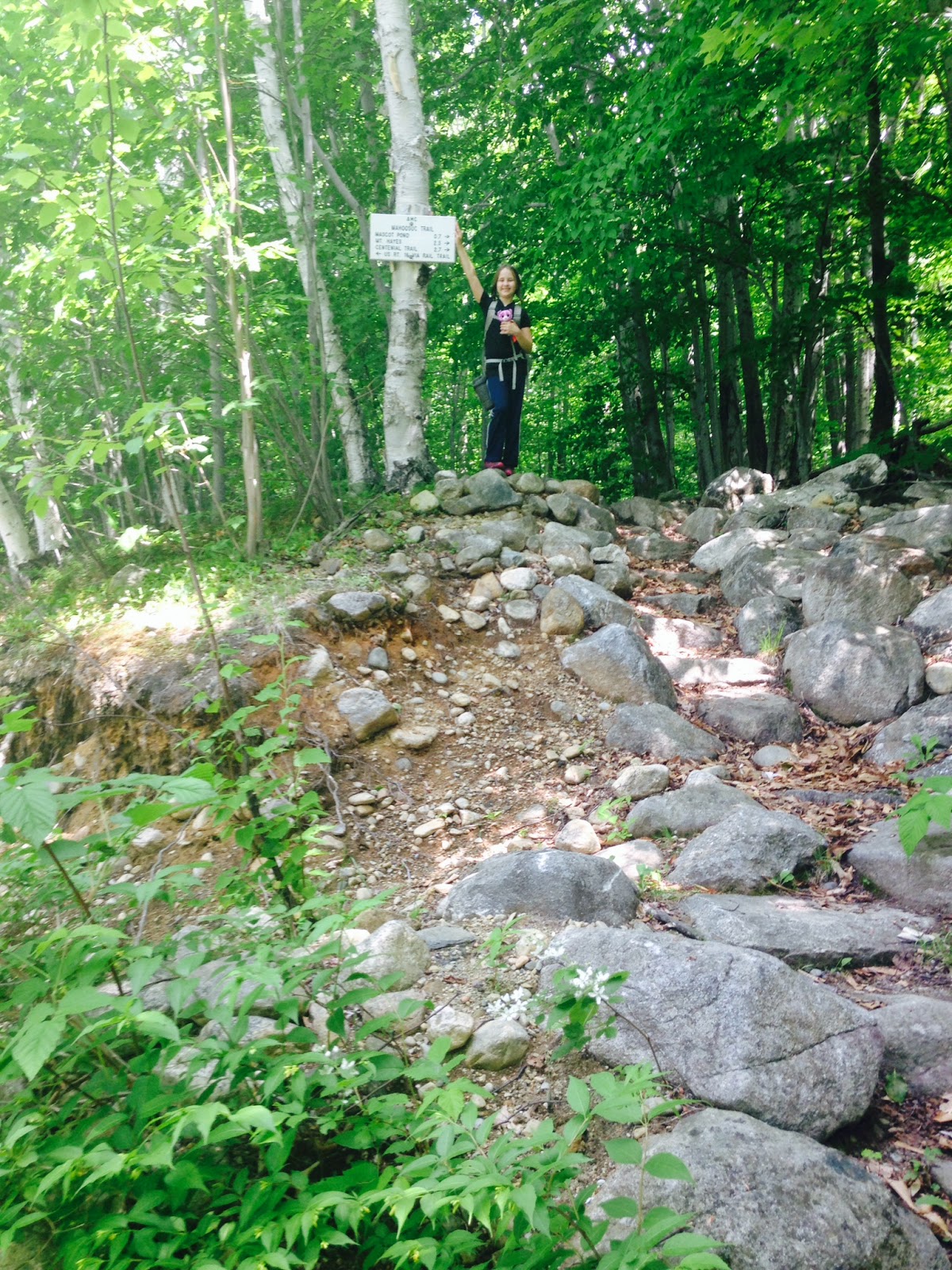 This was a nice way to kick off what will be a frenetic seven weeks.  In addition to hiking peaks, the girls have karate twice a week, schoolwork (we keep up with math, foreign language, reading the classics, writing, and spelling during the summer), a bunch of social gatherings/field trips with other homeschoolers, bird club outings, playdates, and a two week Shakespeare camp.  Life is busy, which is how we like it.

We're hiking again this Thursday -- 'til then,
Trish
Posted by Patricia Ellis Herr, Alexandra Herr, and Sage Herr at 10:12 PM