Wow -- lots of you entered the ParaVival Paracord Bracelet giveaway yesterday!  Thank you -- lesson learned, I'll announce future giveaways on Mondays and not on Fridays or Saturdays, lol.  Glad you folks are interested -- the drawing will occur this coming Monday, June 24, at 9am.

The forecast last Friday called for possible thunderstorms and rain, so we postponed our Terrifying 25 hike.  Naturally, since we didn't do the hike we'd originally planned, the dark clouds never materialized...no matter, we enjoyed our quick up-and-down of Mt. Cube.

Mt. Cube is on the 52 WAV list.  It's a little mountain southwest of Moosilauke, and it's on the Appalachian Trail.

The grade on Cross Rivendell Trail is easy-to-medium the whole two miles...we made it up in less than a hour. 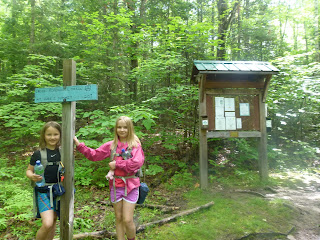 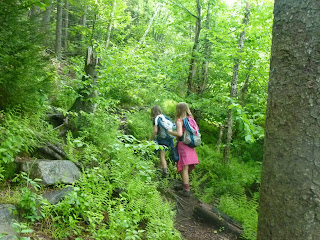 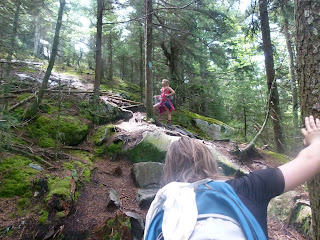 Viewpoint from a ledge a few tenths of a mile from the summit... 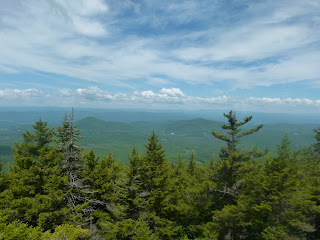 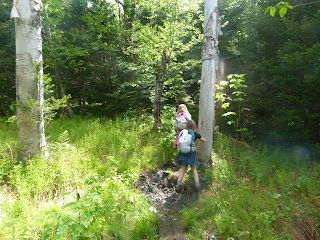 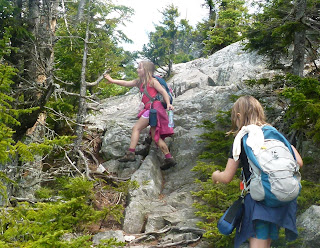 More views as we climb the last few ledges toward the summit... 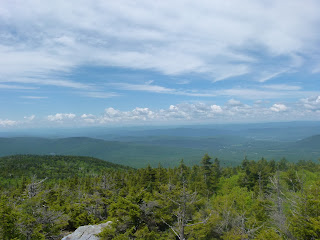 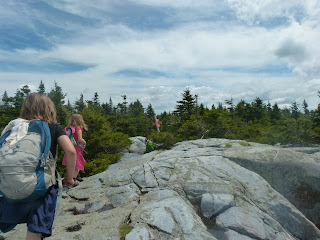 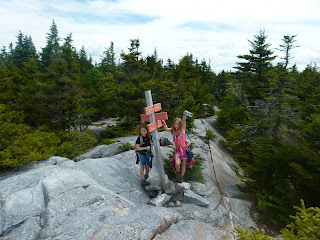 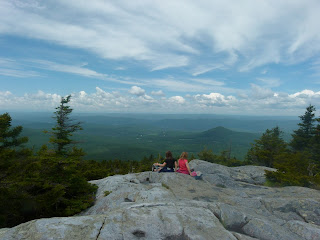 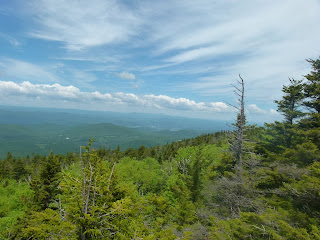 The day was gorgeous -- not too warm, not too cool...we sat up there for at least half an hour, enjoying the morning.
The only unfortunate part of the day was a frustrating encounter we had with a man on the way down.  A group of four people sat near the viewpoint not far from the summit (see above); when we came down, one of them (the fellow) asked the girls, "How far did you make it up today?"  His tone was overly bright, cheerful, and condescending -- you know, the way some adults talk to three-year-olds.  The girls silently looked at each other and kept going (which is their way of dealing with naysayers and people who underestimate them) while I stopped and replied, "Uh...we went to the summit...it's just over there."
As I hurried to catch up with the girls, I heard the man laugh and say to his friends, "I was just trying to connect with them."  His friends were laughing at the way the girls had obviously avoided speaking to them, and I got the impression they assumed the girls should have stopped and politely answered any and all of their questions.  I had to resist the temptation to head back and give the group an earful.  First, why would the fellow assume he should "connect" or become in any way familiar with two children he just met on the trail?  Second, why did he ask a question that assumed the girls didn't make it to the top...and why did he talk to them as though they were toddlers?  Third, why didn't he immediately apologize when he realized his blunder?
Of course, he probably didn't realize his blunder.
Folks, if you want to talk to kids you see on the trail, then take my advice.  First, assume strength and not weakness.  His question should have been, "How was the summit?"  Or, even better (because it assumes nothing), "Enjoying your hike?"  Second, talk to kids like you would an adult.  Don't talk down to them.  Ever.  If you do, I guarantee you'll be the topic of negative conversation as soon as you're around the bend.
As soon as we were past the group, the girls started talking about the man.  I assured them this fellow probably had no idea how condescending he had been.  I reminded them that there will always be people who underestimate them, and that the proper response is to simply carry on, exactly as they had done.
﻿
We made it down to the car shortly afterward. 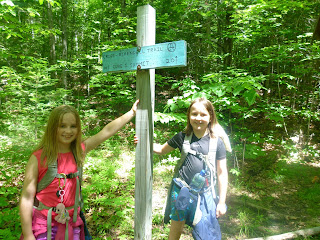 It was, for the most part, a good day and a lovely hike.
Come back this Thursday, June 20, for a guest post by Marcy Light of (Don't Be) Too Timid and Squeamish!
﻿
Posted by Patricia Ellis Herr, Alexandra Herr, and Sage Herr at 6:05 AM