Thunderstorms were in the forecast for the afternoon, so we did a quick hike of Hale in the morning.  We didn't get to the trailhead until 8:15am, which is late for us, and it was humid when we started out.  We tend to melt with the heat and humidity, so, though we made good time and were back to the car by 11:10, the trail felt much longer than it usually does. 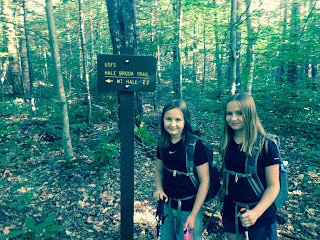 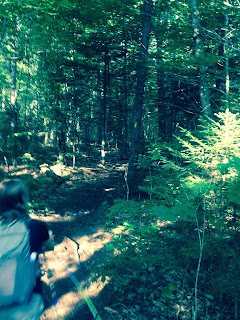 The trail never gets steep, it stays moderate throughout, but we were ready to dunk our heads in this crossing (at roughly the halfway point) after hiking in the heat. 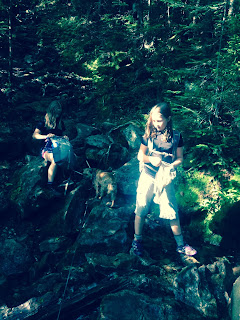 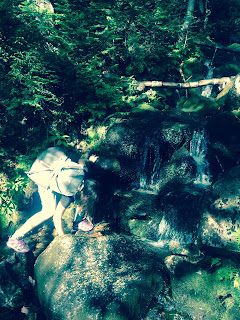 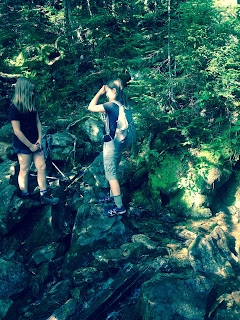 Up we went, up more moderately-steep stretches and switchbacks...we felt hot and uncomfortable, so we actually drank most of the water we brought (we usually carry way more than we need). 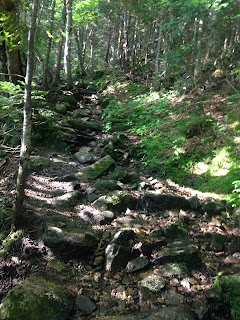 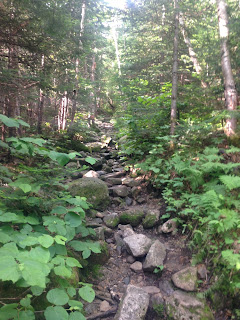 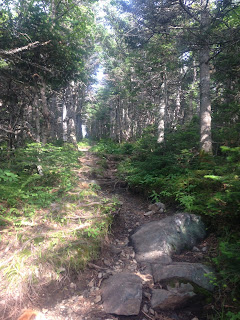 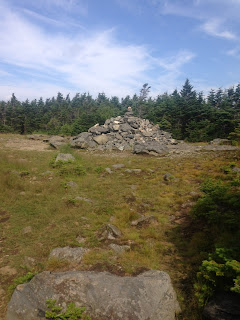 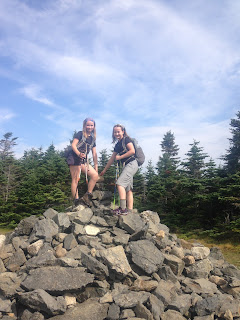 We sat and ate for about twenty minutes, then we headed down.  From the top of the cairn, I could see clouds starting to build...the clouds were far away, but I knew the forecast and predicted the clouds would get darker and closer over the next couple of hours.  I was glad we were heading down...and I was a bit surprised to see two groups (a couple and a trio) heading up.  I didn't mention the storms to them, since I figured these folks knew what they were doing.  Some folks don't mind hiking in storms as long as they aren't exposed (there's no exposure on Hale except for the very top).

We reached the car at 11:10.  A woman and her son were about to head up -- they looked like they were new to hiking, and her question confirmed this...she asked me how long it had taken for us to hike the trail.  I responded by telling her that the girls were experienced and that we had done this trail many times, so our pace might be relatively fast.  When I told her it had taken us three hours, including breaks and time lounging on the summit, she seemed to think that was very slow...which, again, confirmed my suspicion that they were beginning hikers (our pace would be slow for flat ground, but it's decent for steep trails).  I did not mention the probable incoming storms, because I figured they had seen the forecast and would turn around if they weren't moving as fast as they'd hoped.  However, Alex regretted not mentioning the weather probability, and, later, she kept saying we should have warned them.  I have mixed feelings about it -- they were new, yes, but I also feel it can come across as obnoxious to give unsolicited advice...and it's very possible they knew the forecast and figured they'd see how far they could get before realizing they'd have to turn around.  I haven't heard anything about them through the news or through Search-and-Rescue, so I am going to assume they made it down before those storms arrived (and they did indeed arrive, around 2:30)...or that they got rained on, but made it down just fine.

The girls and I will hike next week...hopefully we'll get Huntington Ravine Trail...the weather needs to cooperate on the days we have available to hike.


Posted by Patricia Ellis Herr, Alexandra Herr, and Sage Herr at 6:07 AM

I still always love your reports and pics. You-all rock. :)

Did you check your compass up on Hale? There's something about the summit area which throws compasses for a loop. If you walk around with one you'll see a big variation in "north".

Cumulus -- that is true, the compass does it's own thing on Hale. Also true on the summit of Adams.

That should have read "done its own thing" and not "done it's own thing" -- my apologies for the error!!