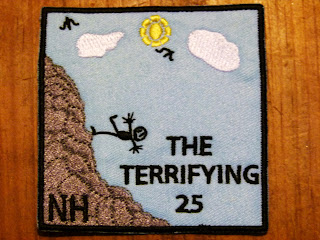 This list includes slides, rock scrambles and boulder caves that can be found along maintained trails within the White Mountains of New Hampshire.

Sage came up with the name -- The Terrifying Twenty-Five.

Alex drew the design for the patch.

I went through Daniell and Smith's White Mountain Guide, 28th Edition and, based solely on the published descriptions, came up with a list of trails. I then consulted with the girls and asked a bunch of other hikers to contribute their advice.

Since there is no definite measure of what constitutes frightening, extremely difficult, or very interesting, I created two sections of this list. The first section consists of required trails, ones that most agreed were tricky, scrambly, and/or just plain fun. The second section consists of elective trails, trails that some found difficult but others found tame. One can choose any five trails from that section, based on what the individual hiker wishes to experience (ladders, a wee bit of scrambling, boulders, etc.)

It will take a while for the girls and I to hike each of these trails.  Each time we complete a trail, we'll link the name of the trail to our trip report.  In the meantime, please refer to the descriptions contributed by Bob Kittredge, one of our Terrifying 25 finishers.

Baldface Circle Trail (southern portion, from South Baldface Shelter to the summit of South Baldface)
Nice ledges (as long as they're dry). A nice scramble or two between the two peaks as well.

Caps Ridge Trail (exposed scrambling)
One of my favorites. The downclimb of the lowest "cap" is a little scary.

Carter Ledge Trail
Strenuous and a little scary. Wouldn't want to do it when it was really wet. For some reason, every time I've done it, I've managed to lose the trail for a while down below the first ledges.

Chemin des Dames
A steep little climb, but not terribly scary. Pales in comparison to the two other trails up the headwall.

Flume Slide Trail
A couple scary places which tend to be wet and don't have much by way of handholds. Nice craggy summit.

Great Gulf Trail
Long and strenuous with 5000' of vertical.   It's a little hard to follow on the headwall because the blazes are not being kept up, it now being a designated wilderness area. Keep your eyes pealed for small cairns and faded yellow blazes.

Great Gully Trail
Lovely trail, very steep and strenuous. The WMG describes one tight spot where most (sane) people take off their packs and crawl. No biggie. The alternative is for daredevils. If you descend via the Spur Trail on the western edge of King Ravine, you can take the little side path out to Knight's Castle and have a great look straight down into the ravine.

Huntington Ravine Trail
Wonderful trail. Scariest part for me is the steep slab above the Fan. If you should lose your footing and start to slide there's nothing to grab onto. The other scrambles higher up generally have handholds, but a sharp dropoff or two may rattle some people.

Ice Gulch Path
Very scenic. I like to do this in the counterclockwise direction. Lots of boulders to scramble over and crevices (some camouflaged) to slip into. I got a boot so jammed into one such crevice that I had to untie the lace, remove my foot and then wiggle the boot loose.

Madison Gulf Trail
Steep and strenuous on the headwall, some minor scrambles.

Mount Morgan Trail (rickety ladder route)
Chutes and ladders!  Scariest part for people with short legs is the switch from the second ladder to the third.

North Slide, N. Tripyramid
If you were to lose your footing, you could slide a long, long way.

Six Husbands Trail
Definitely some "exposure" here, and the trail can be a little hard to follow around the boulder caves. But the ladders on the really tough spots are nice and sturdy.

South Slide, S. Tripyramid
...a pain in the neck.  As we descended, the guy behind me happened to dislodge a large, round rock. I heard it "thump" and turned around to find it slowly rolling down the trail at me. I had to jump out of its way as it rolled off into the woods.

Sphinx Trail
Not too scary, but by the time you get to it, you've done a fair amount of elevation and may be kind of tired. Pretty stream and waterfalls.

Subway (King Ravine Trail)
Scariest part is at the beginning where you have to leap from boulder to boulder with deep drops in between. Not to be contemplated if the rocks are at all wet. The caves were a bit of squeeze even for a skinny guy like me. You may want to drop your packs at the start of the Subway, and then return for them along the Elevated.

Table Rock Trail (from eastern trailhead, to ledge)
OMG! The rock itself is narrow and has sheer dropoffs on either side. Although the top is flat and level, I found myself edging out onto it with little baby steps. Spectacular! Also, the trail to the rock is quite steep, and the rocks and ledges on the trail have a smoother texture than those you find further
south making them more slippery. Take your time and be cautious.


In addition to the above required trails, one must hike any five of the following:

Air Line Trail (narrow bits up top)
Nice views, but it doesn't take you all that perilously close to the edge of King Ravine. There is a place a short ways up above the junction with the Chemin des Dames Trail where you can make your way out to a projecting rock and look straight down into the ravine.

Beaver Brook Trail
The steepest part of this trail is at the very beginning and leads along the brook, so the rocks tend to be damp or wet. The footing can be treacherous.  Fortunately, the Dartmouth Outing Club has installed iron hand rungs at critical places to make the climb less dangerous.

Brook Trail
The hairiest part is one long steep slab where a slip could cost you dearly.  If it's wet, stick to the edge and grab bushes. Some other fun scrambles, and the summit is always a scrambler's delight.

Blueberry Ledge Trail (tiny bit of exposed scrambling)
Some challenging scrambles with a bit of exposure.

Devil's Hopyard
The upper part of the trail is a jumble of small, wet rocks making the going rather slow and somewhat nerve wracking.

Hi-Cannon Trail (one rickety ladder)
Only scary part was the ledge just above the ladder which has a steep dropoff to the left.

Osseo Trail (ladders)
Not scary, even the ladders, except maybe for the final approach to the summit.

Percy Peaks Trail
Only potentially scary part is the summit dome which has steepish rock slabs. I'd steer clear of this trail if I expected them to be wet, but it's fine if dry.

***Many thanks to Bob Kittredge for providing these helpful comments!***


If anyone besides us has any interest in doing this list, here are our rules:

Get to the trailhead however you like.
Given the nature of the trails, no winter patch will ever be created.
One must hike the entire trail on your own two feet.

Above all -- hike at your own risk. We are not liable for any injuries or accidents.

If you take on this list, then let us know when you finish and we'll send you a patch.  We may eventually charge for shipping and materials (just expenses, no profits), but for now, the cost is zero.

Your application should be sent via email to: patriciaellisherr@post.harvard.edu.

Type the following in the body of your email (I will not open attachments):

Your name, mailing address, names of the trails and the date you hiked each. Comments and links to trip reports would be nice, but they're not required.

You're on the honor system. Karma will eventually get you if you lie.

See you out there!